The internet has been all abuzz about Marry Me Chicken, a creamy cheesy chicken dish made with sundried tomatoes. I added extra veggies and a secret ingredient to create my own version. 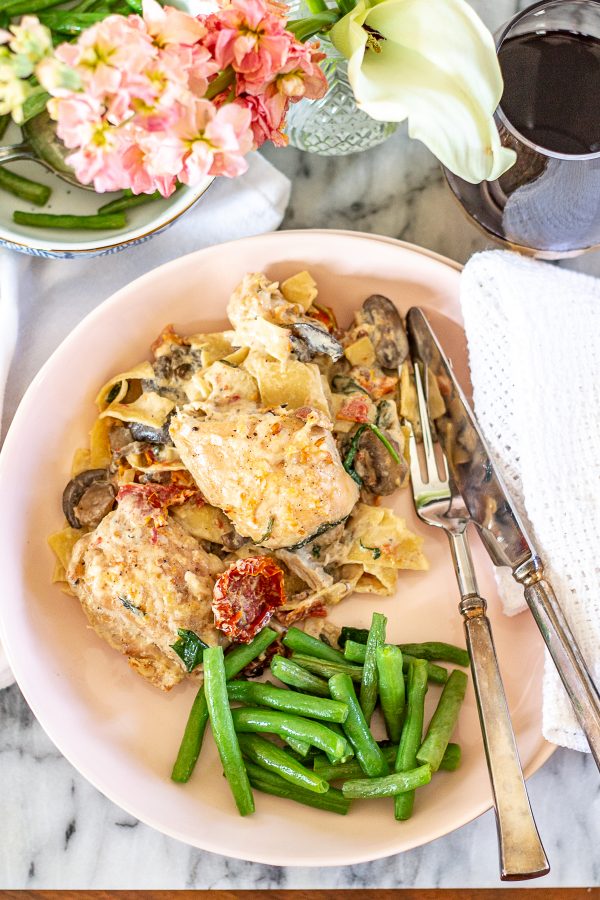 I liked the idea of making a one pot chicken dish with sun dried tomatoes and a cream sauce, but when I tried the Marry Me Chicken recipe, I didn’t love the combination of thyme, red pepper flakes, and basil. I also wanted to add more vegetables to turn this into a complete meal. 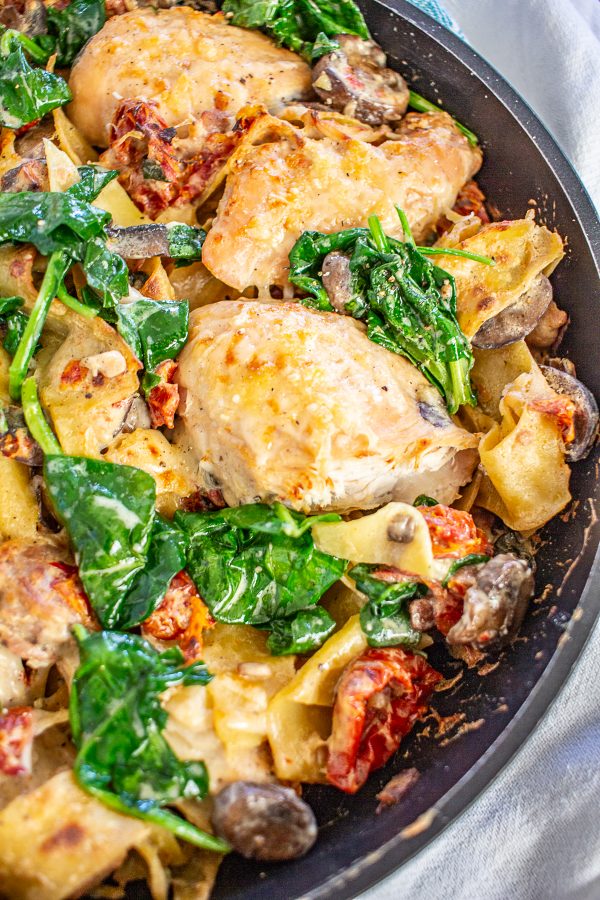 My secret ingredient was pancetta, which gives this meal a flavor boost. I browned the pancetta along with some mushrooms and garlic in a large dutch oven. Then I seared chicken breasts and thighs until they were browned. 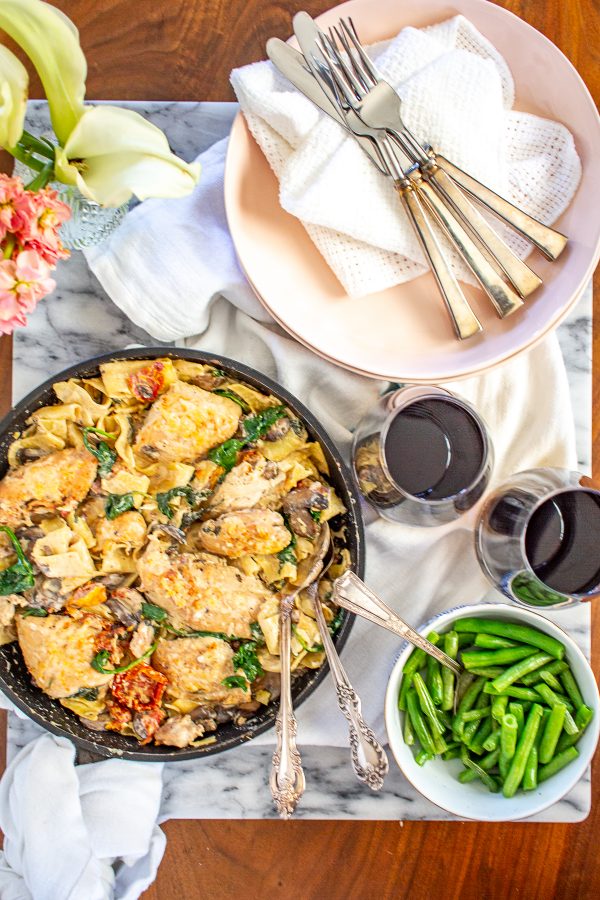 The chicken and mushrooms are then slowly cooked in a creamy parmesan and white wine sauce with the mushrooms, pancetta, and sundried tomatoes. The white wine and a touch of lemon juice add a fresh light flavor that balances out the richness of the cream and the sun dried tomatoes. 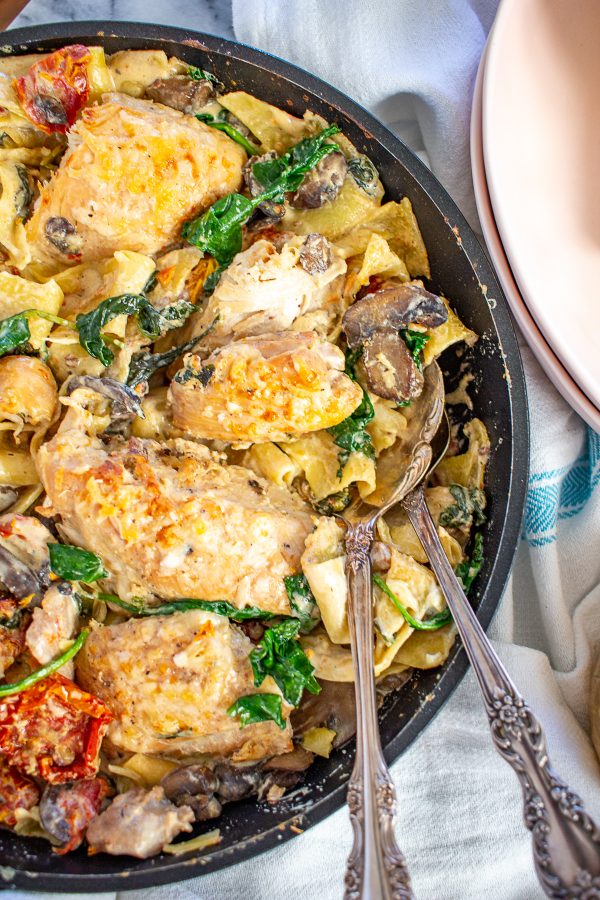 By letting the chicken cook at 300 degrees for 45 minutes, it becomes extra tender. It nearly falls apart as it cooks.

Once the chicken is ready, add some baby spinach and some fresh pasta to the pot and let everything simmer together for 1 minute. It’s a little easier to do this if you remove the chicken from the pot and set it aside. 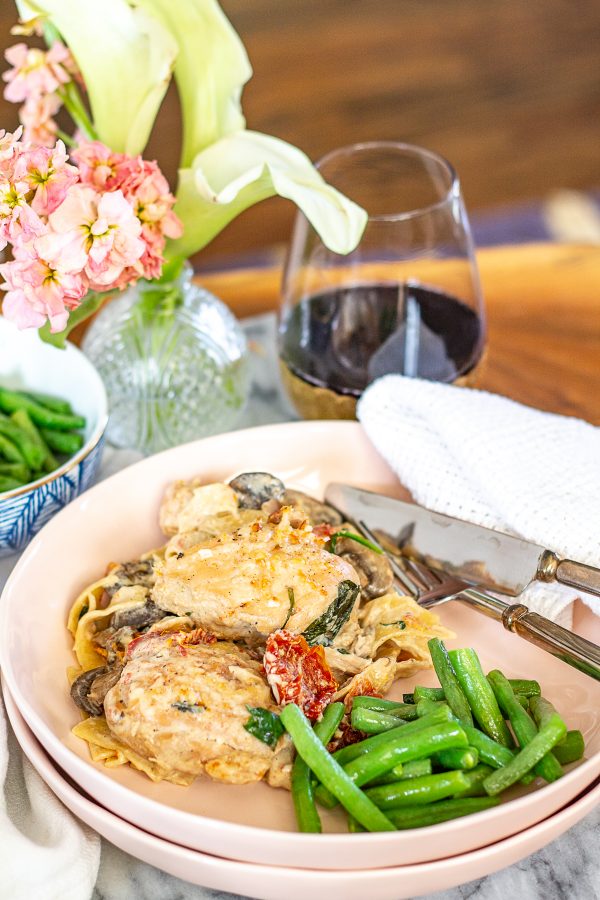 The final result is extra tender chicken in a super flavorful creamy sauce with mushrooms, sun dried tomatoes, pancetta, and spinach, on a bed of pasta.

I love this meal because it is easy to make in a batch large enough for a dinner party, and the active preparation time is minimal. 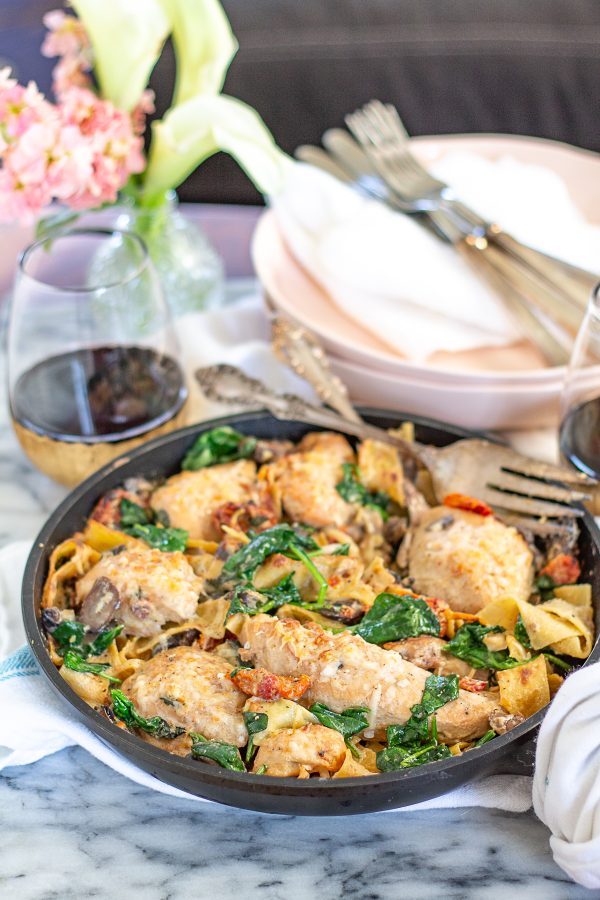 Full disclosure: we ate dinner before I shot the photos, so the photos show a full batch minus two servings.

My Version of Marry Me Chicken:

Start by heating your oven to 300 degrees.

Heat a large dutch oven over medium heat, and add the pancetta. After a minute or two the fat from the pancetta will begin to melt. At this point, add the mushrooms and the garlic. Let the mushrooms sweat out their moisture, and eventually brown. This will take about 8 minutes. Once the mushrooms have lightly browned, set them aside.

Using the same dutch oven, heat the olive oil over high heat. Sprinkle the chicken with salt and pepper, and then add it to the dutch oven. Brown both sides of the chicken, searing it to lock in all the juices. This will take about 1-2 minutes per side.

As soon as the chicken has browned, remove it from the pan and set it aside. It is ok if there is some chicken fat and browned bits of chicken in the pan, this will add extra flavor to the sauce you are about to prepare.

Still using the same dutch oven, melt the butter over medium heat. Whisk in the flour, and let it cook for 1 minute before whisking in the half and half and the cream. Let the mixture come to a slow and steady simmer, and whisk it while you let the mixture thicken for 1 minute. Then whisk in the parmesan, lemon juice, and white wine.

Add the sun dried tomatoes, and return the mushrooms and the chicken to the dutch oven. Cover the chicken with the sauce and the vegetables.

Just before taking the chicken out of the oven, prepare the pasta. I recommend using fresh pasta since I think it does a better job of soaking up the sauce. You are going to finish cooking the pasta in the sauce, so undercook it by about a minute. 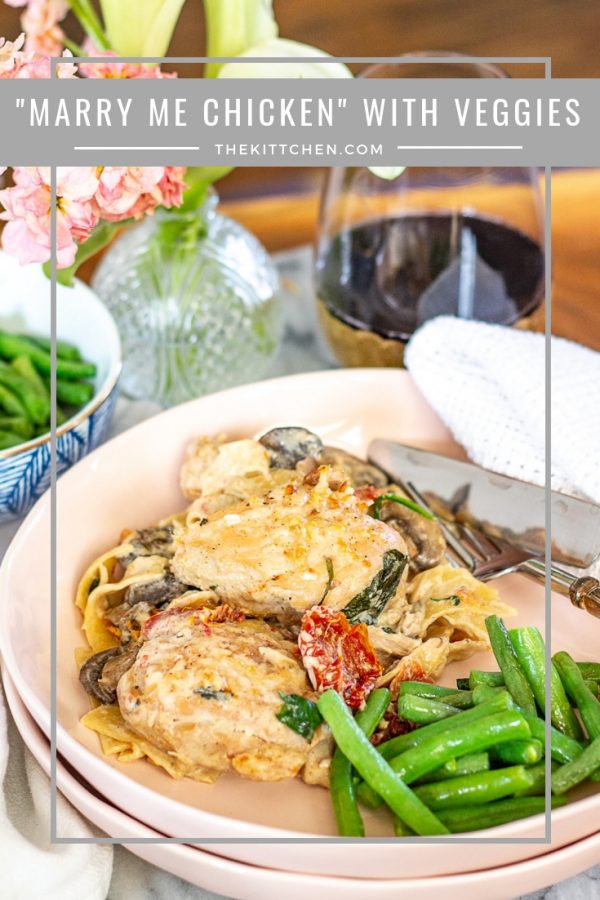