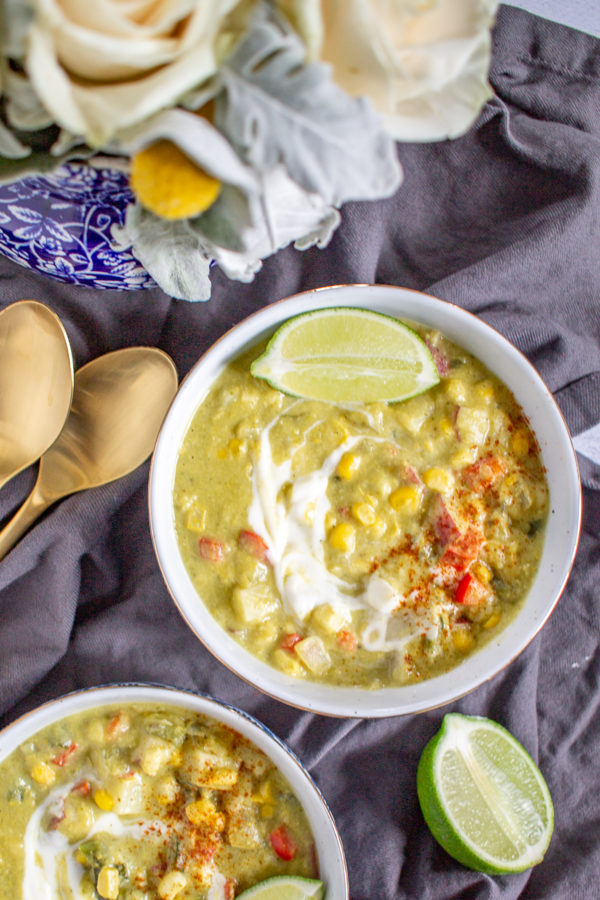 This Roasted Poblano Corn Chowder was inspired by my love of eating spicy foods on cold days, and my fan-favorite poblano cream sauce recipe. Turning my favorite sauce into a complete meal just makes sense! 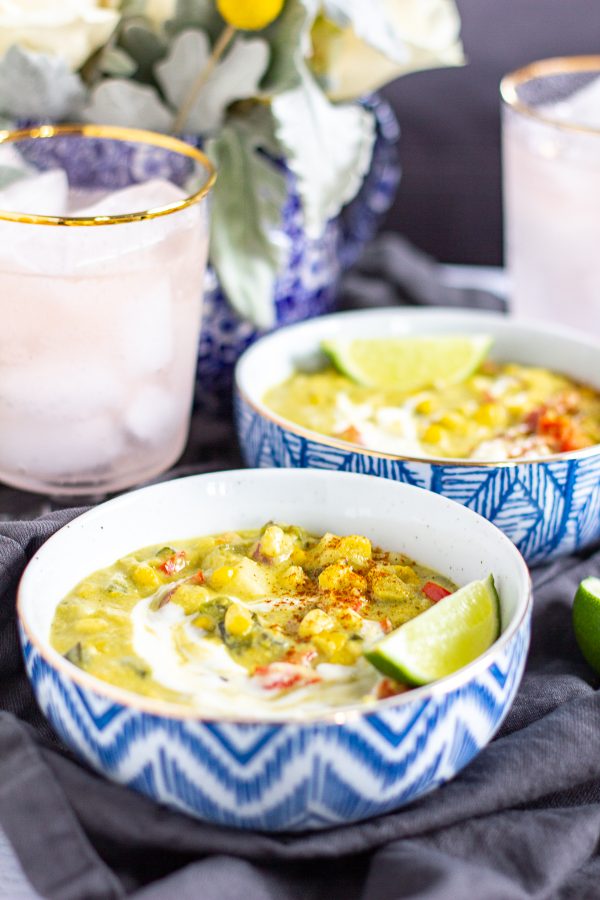 The chowder gets its color and texture by pureeing half of the onion, poblano, and potato mixture. The pureed vegetables give the chowder a greenish yellow color. It might look a little odd, but you will get over that once you try a bite.

Unlike most chowders, this recipe doesn’t call for any heavy cream. Instead, it is made with a cup of half and half and a touch of sour cream. The sour cream helps to thicken the soup and tone down the spice level. 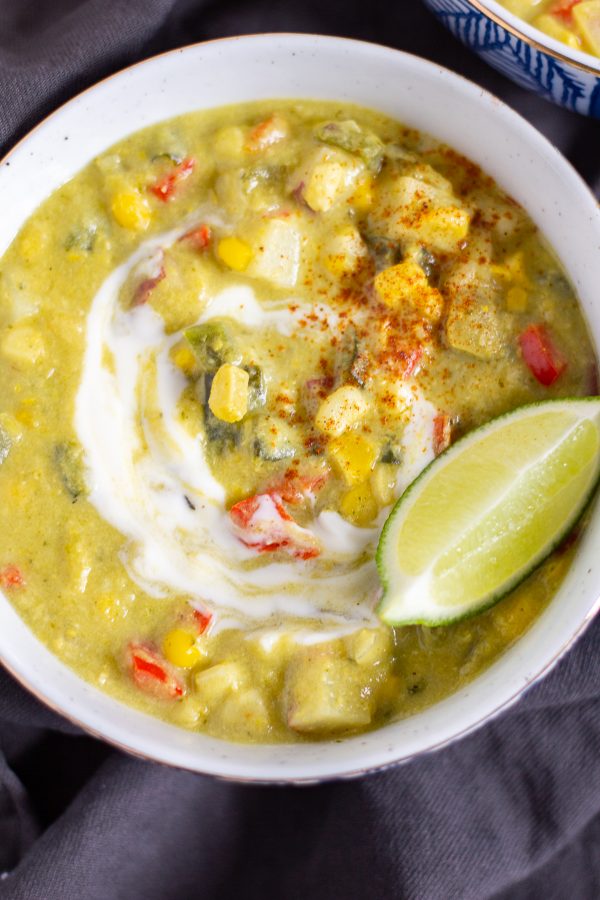 I love the combination of the thick creamy chowder and the tender chunks of poblano and potato, plus the fresh crispness of the bell pepper and corn. The soup is seasoned with fresh lemon and lime juice. The citrus notes are the perfect contrast to the creaminess of the soup.

You probably want to add the bell pepper after you puree the soup. Otherwise, it would make the soup take on a brownish color which may not be appetizing. Or just use a yellow bell pepper. 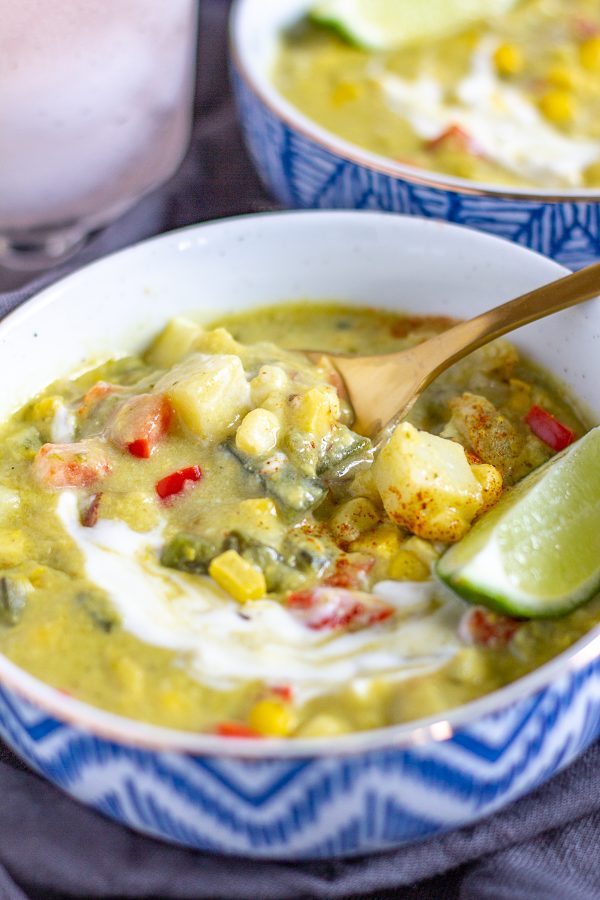 If you follow the recipe exactly, the Roasted Poblano Corn Chowder will have a medium-high spice level. It is a spice that builds with each bite. You can easily tone down the spice by using less poblano pepper and/or adding some extra sour cream at the end.

I kept the chowder vegetarian, but you could absolutely add diced chicken. Serve with a swirl of sour cream, a sprinkle of paprika, a squeeze of lime juice, or even some crumbled bacon on top. 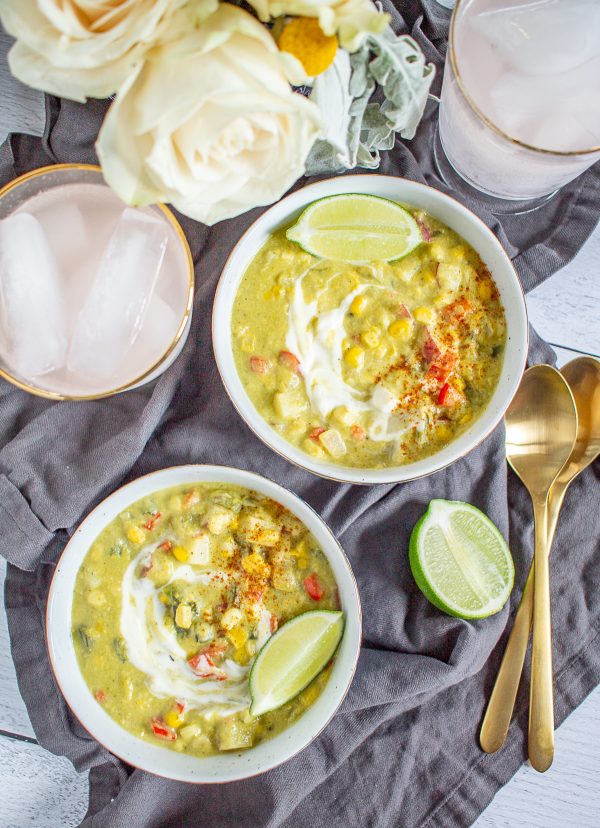 And before we get to the recipe, an important warning. Poblano peppers are spicy, and it is best not to handle them too much – especially when you are peeling off the charred skin. I recommend wearing gloves. I wear contacts and I always like to be on the safe side, so I take my contacts out before handling the peppers. Handling peppers and then touching your eyeball is a mistake you only make once. 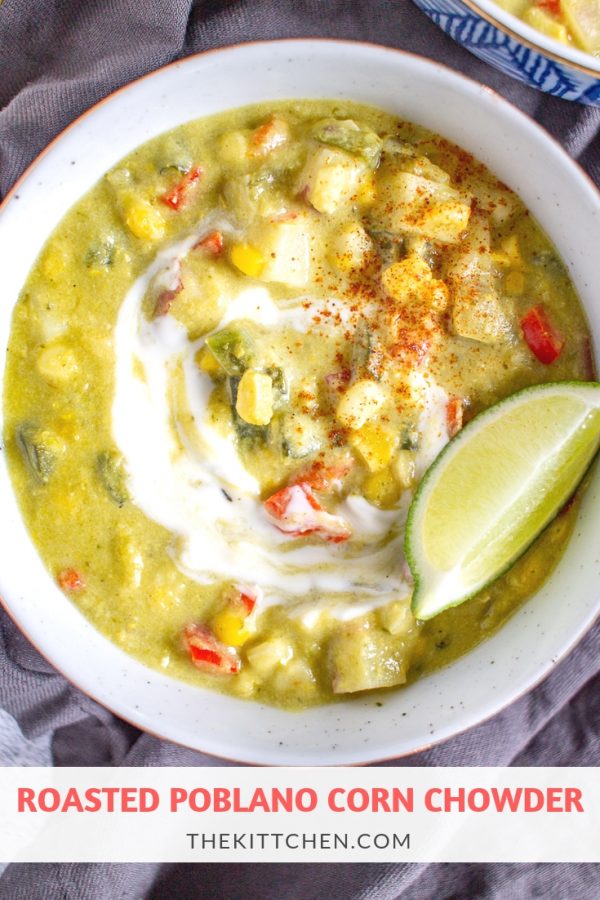 Start by roasting the poblanos. I like to put the peppers directly over the flame of the gas burners, rotating the peppers until all of the skin is charred. Then I place the peppers in a covered bowl for 15 minutes. This lets the peppers sweat off the skin a bit, and gives them time to cool. After 15 minutes, peel off the skin - it's best to wear gloves for this. Then loosely chop the peppers. I recommend discarding the seeds unless you want an extremely spicy soup.

Next, melt the butter in a large pot over medium heat. Then add the garlic and onions. Season with salt and pepper. Cook until the onions are translucent.

Pour the water and the corn into the pot along with the onion and garlic. Let the corn simmer for 4-5 minutes. Then add the chicken broth and half and half. Bring to a slow boil, add the poblanos and potatoes, and let boil and reduce for 10 minutes.

Puree about half of the soup, or until it reaches the thickness you desire. Do this is batches using a blender. Pour the pureed soup back into the pot and let simmer.

Add the bell pepper to the soup. Season with additional salt and pepper, plus the cumin, lime juice, and lemon juice. Let cook for 5 minutes.

Lastly, add the sour cream to taste. The sour cream helps to thicken the soup but also tones down the spice level.