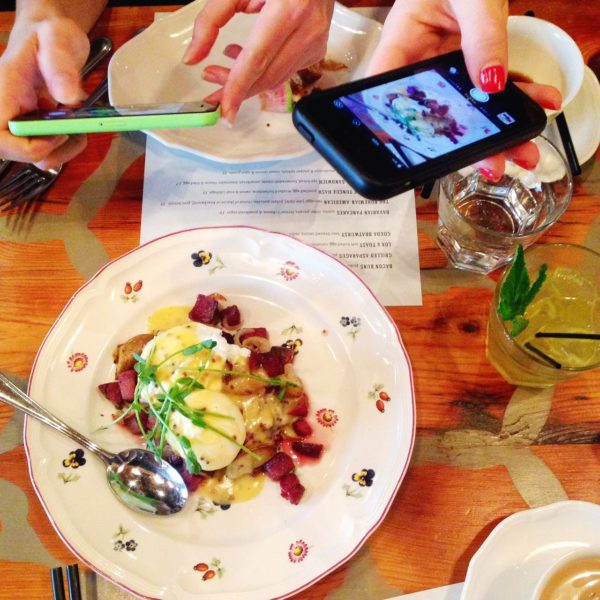 Brunch on a weekday. Doesn’t that sound indulgent? On a recent Wednesday, I was invited to River North’s Bohemian House for a preview of their new brunch menu. I, along with some of my favorite food bloggers, was treated to almost half the menu. Food blogging in tough work! (Ok, not really). Bohemian House serves up cuisine with an Eastern European influence, and their take on brunch is fresh and new. I love brunch as much as the next girl, but I do get tried of seeing the same six things on every menu. Boho House is a departure from the usual Eggs Benedicts (which I do love), waffles, and pancakes. Let me show you what I mean. 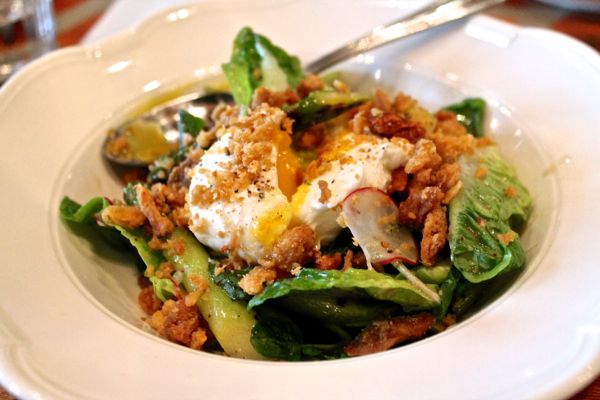 We started off the with Grilled Asparagus, which is served with radish and lettuce, dressed with a mustard vinaigrette, and topped with crispy chicken skin and a poached egg. You haven’t seen that on other menus have you. I love putting an egg with a runny yolk on my salad, and the combination of the mustard dressing and the yolk was superb. This is definitely one of the lighter menu items of the many that we sampled. 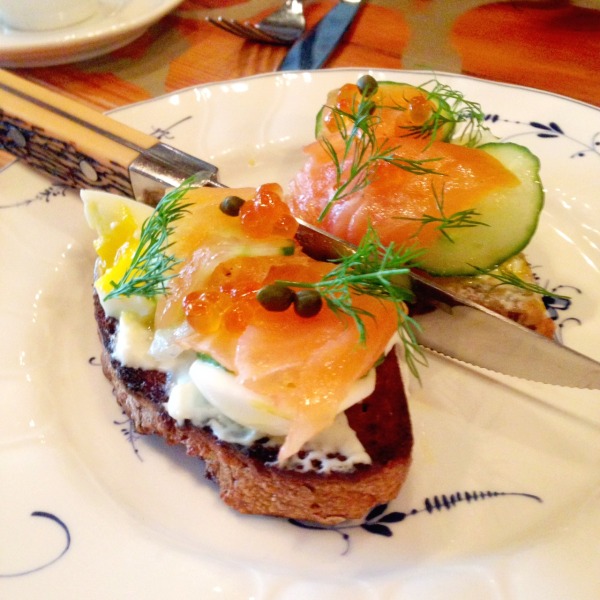 The menu is broken into four sections: lighter items – like the grilled asparagus, entrees, pastries, and sides. We started with the lighter items, moving to the Lox & Toast next. Fresh toast was spread with cream cheese, layered with cucumber, salmon roe, and a soft boiled egg, and topped with lox and dill. Cream cheese, salmon, and softly boiled eggs are truly a great combination. This is a light breakfast that will still fill you up.

Then we tried the Gouda Bratwurst, which is something I never would have ordered, but I couldn’t stop eating it it. My friend Anne said it best, we are used to sausage being fatty and chewy, but this wasn’t. The meat was lean, and the brat gained nice flavor from both the gouda and the beer it was cooked with. I couldn’t get enough. And apparently I was so busy eating that I forgot to take a photo. 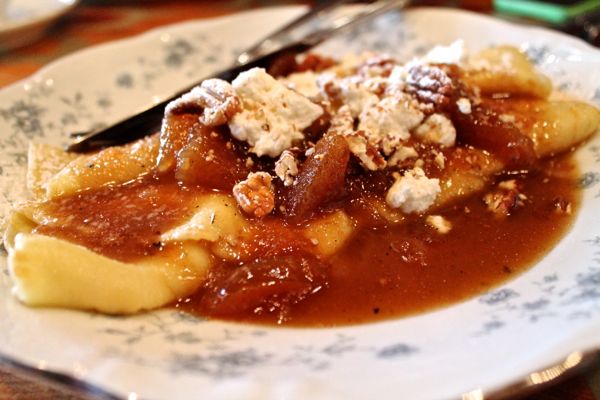 The Bavarian Pancakes was the first entree we tried, and one of the crowd favorites. European style pancakes are basically slightly thicker crepes, they are light and airy and at Bohemian House they are stuffed with apples, creamy farmer’s cheese, and pecans, drizzled with cider and dusted with powdered sugar. They were sweet but not overwhelmingly so. 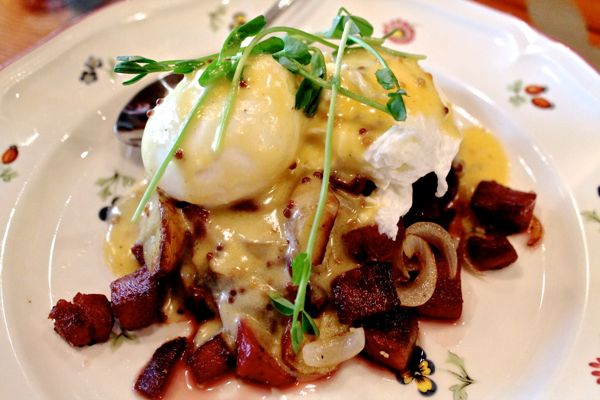 While hash is a staple on most Midwestern brunch menu’s, Boho’s Smoked Beef Tongue Hash is completely different. And who knew that beef tongue could be so tender? Perfectly poached eggs were placed on a bed of diced smoked beef tongue, potatoes, and sweet and sour cabbage, and drown in a mustard hollandaise. I surprised by how much I liked this. 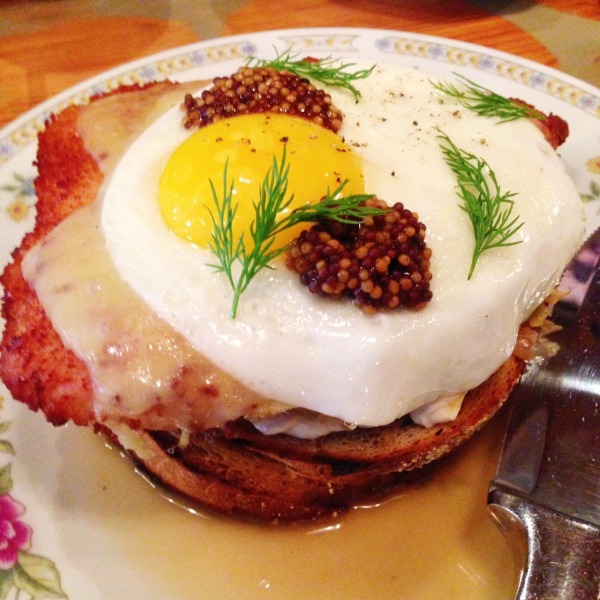 The Pork Schnitzel Sandwich is an aggressive amount of food. It’s delicious, but I can’t imagine ever finishing it. Thick breaded pork is served in an open-faced sandwich on rye bread, horseradish cream, a generous layer of sauerkraut, and topped with melted ementaler cheese and a fried egg. It’s definitely a fork and knife situation, and it could easily be shared. 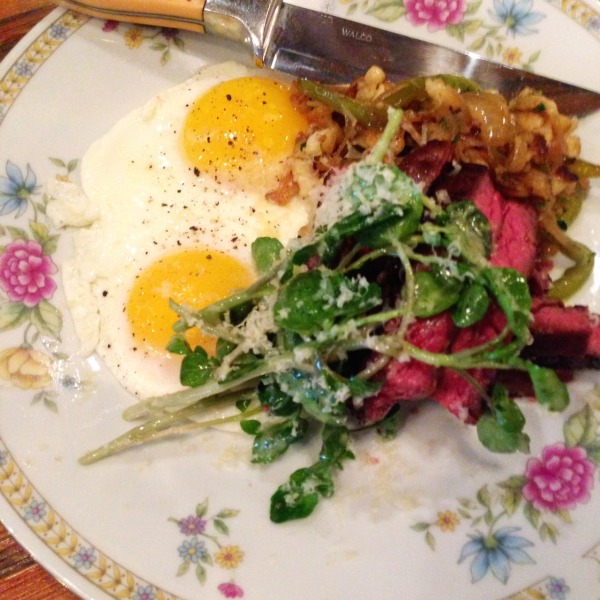 The Skirt Steak and Fried Eggs was probably the most traditional brunch item. It was served with mushroom and pepper spatzle, sweet onions, and gouda. I was starting to get full, but I couldn’t resist the beautifully medium rare steak. The hearty portion proves that Boho is where the man in your life would want to brunch. 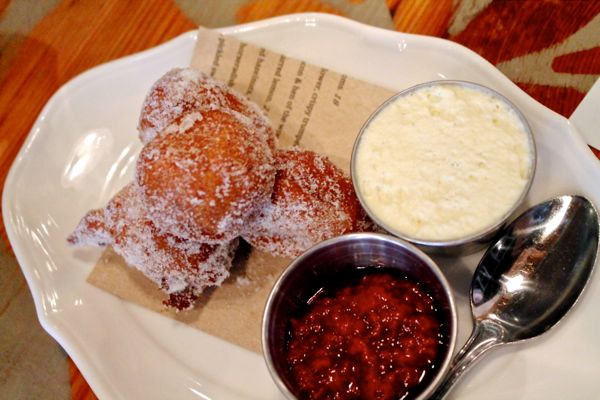 Just when I didn’t think I could eat anything else. They brought out the doughnuts, and you probably know that doughnuts are the way to my heart. Especially fresh warm doughnuts. These are the same doughnuts that are available as a dessert but at brunch they are paired with Bavarian creme and raspberry jam. 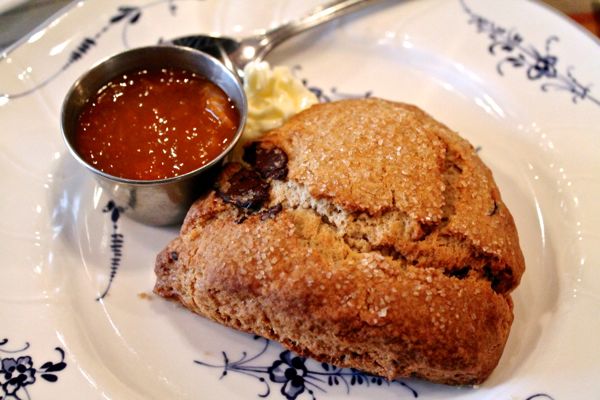 The Chocolate-Cinnamon Scone is massive and made for sharing, and served with butter and kumquat marmalade. 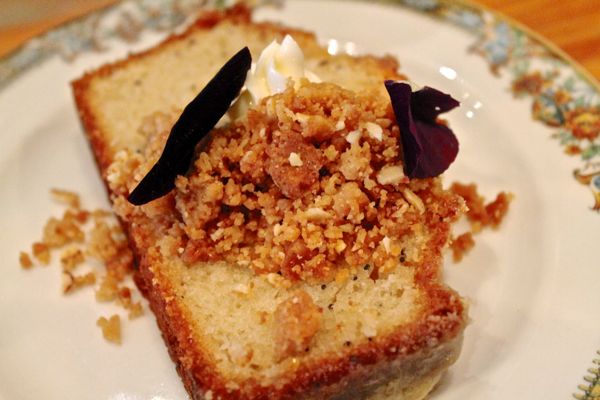 My favorite pastry was the Almond Poppyseed Cake with orange glaze and streusel. It was delightfully buttery, and a nice hint of citrus. The almond poppyseed combo was fun. I love almond flavored anything, and the poppy seeds lent a great texture to the cake. 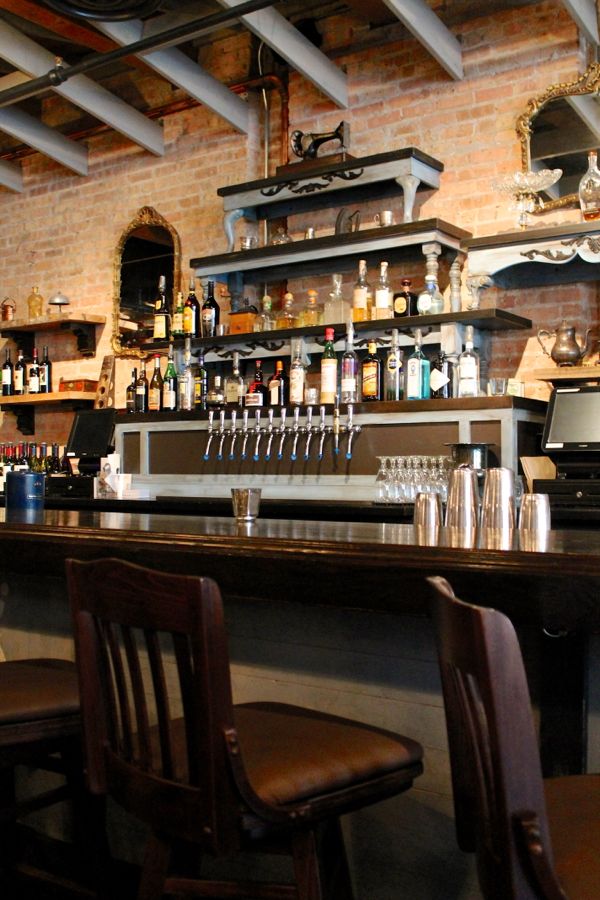 Bohemian House is located at 11 West Illinois, just off of Hubbard Street and a short walk from the Brown Line Merchandise Mart stop. I love the Bohemian chic decor. It’s welcoming and low key, and still a bit formal. They serve weekend brunch and dinner, and you should make a point to try both.