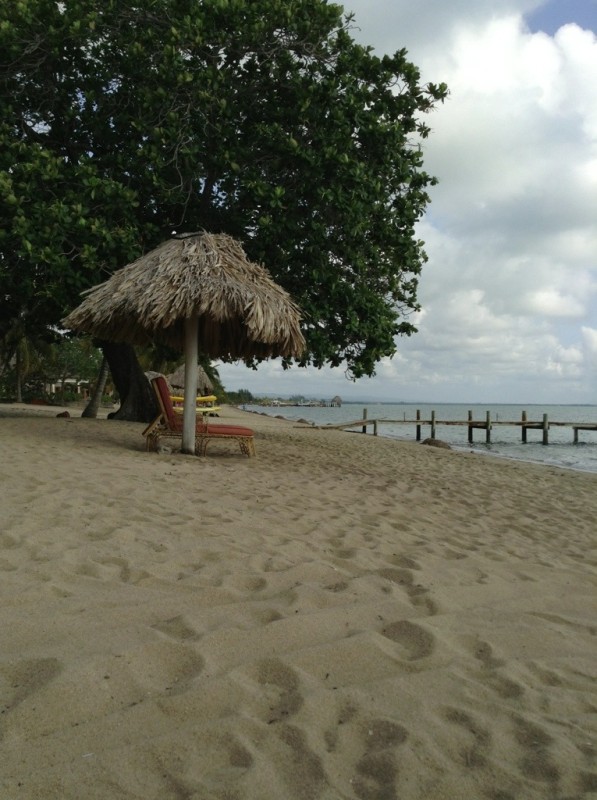 Charles and I escaped cold Chicago and went to Belize a couple of weeks ago. Belize is a tiny country in Central America that offers jungle, beaches and Mayan ruins to explore. Many of the hotels in Belize have a sister hotel, so it is easy to plan a vacation to visit both the beach and jungle.

Belize is not the easiest place to get to. Most flights to Belize have a stopover in Texas. Once we made it to Belize City I thought that we would be picked up and taken to the hotel. Not so. The roads in Belize are not good (the highway is a two lane paved road) so it is better to take a 12 seat plane to your final destination. By the time we were at the hotel we had been traveling for 12 hours (door to door). Not a big deal, but just be aware. 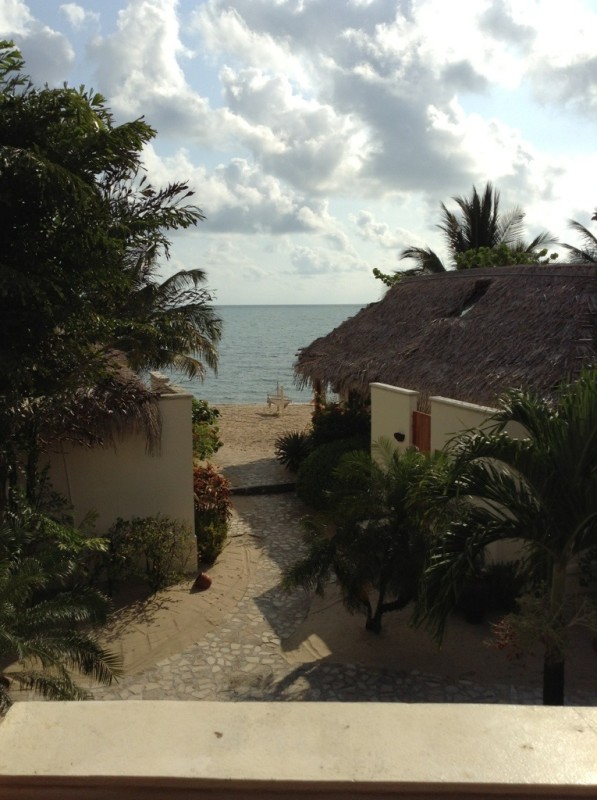 We headed to the Hopkins Beach first were we stayed at the Almond Beach Resort. Hopkins is a tiny village with 5 seaside resorts and a handful of restaurants. It is certainly not a touristy area, which made the entire experience feel really authentic. The Almond Beach Resort was lovely. We were right on the beach, the water was really warm, and our room was near the pool with a swim up bar. They conveniently have hammocks and large thatched umbrellas lining the beach. Hopkins is on a large bay, which means that the area doesn’t really have waves or tides, go to Costa Rica if you want to surf. 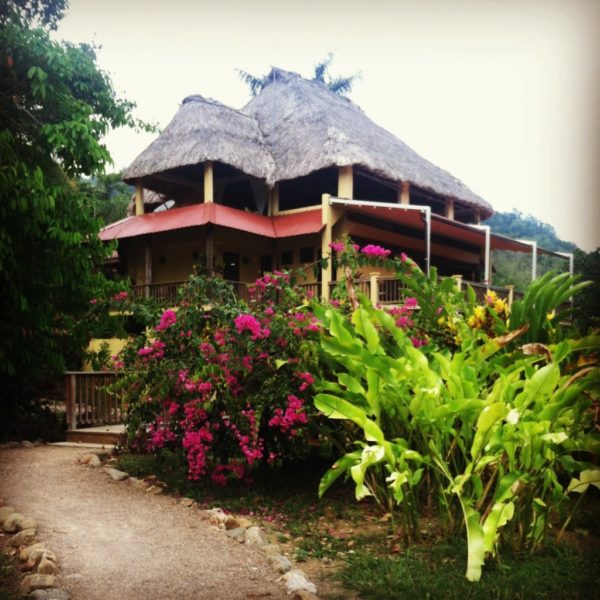 After four days on the beach and some epic sunburns we went to the jungle. We thought we were in the middle of nowhere before, but we weren’t. Sleeping Giant was the middle of nowhere, but it was so cool. National Geographic actually stays there for a week a month, which makes sense because it is the perfect place for an adventure. 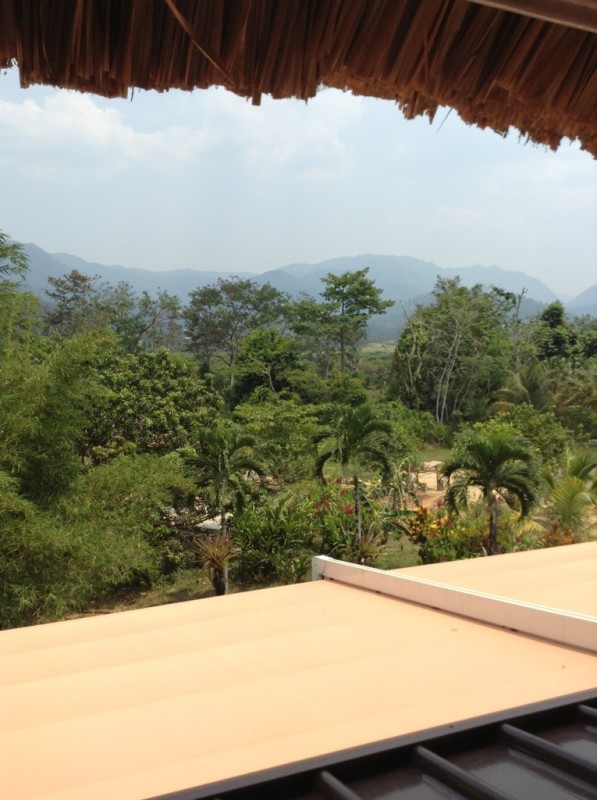 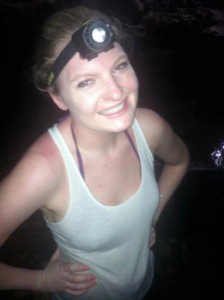 Rocking a head lamp in a bat and spider filled cave.

We decided to spend half of our time doing adventures and half of our time just relaxing. The first adventure we did was Cave Tubing. My mom had read about it and kept asking me if I was going to do it. What we didn’t realize is that caves are filled with bats and spiders the size of my hand. I also didn’t know that the cave was miles deep, and that we would go so far into the cave that we couldn’t see the light of day and had to wear head lamps. After several hours in the cave I started to get a little anxious and just wanted to get out. I am glad I went though. The cave was a Mayan ritual site. It was amazing to think that the Mayans traveled miles through water to the inside of a cave, climbed up rocks into little passage ways and held rituals – all while carrying a torch. At one point at one of the ritual areas we turned out lights off and considered what would happen if a Mayan’s torch went out. It was pretty scary. All the adventure led up to seeing a statue of a Mayan fertility god which I made an effort to stay far away from. Apparently Mayans who were having trouble getting pregnant would go there and pray to the fertility god, and then if they had a baby they were supposed to sacrifice it to the fertility god in hopes that they would have lots more babies after. (Sorry that story just took a turn for the worse). 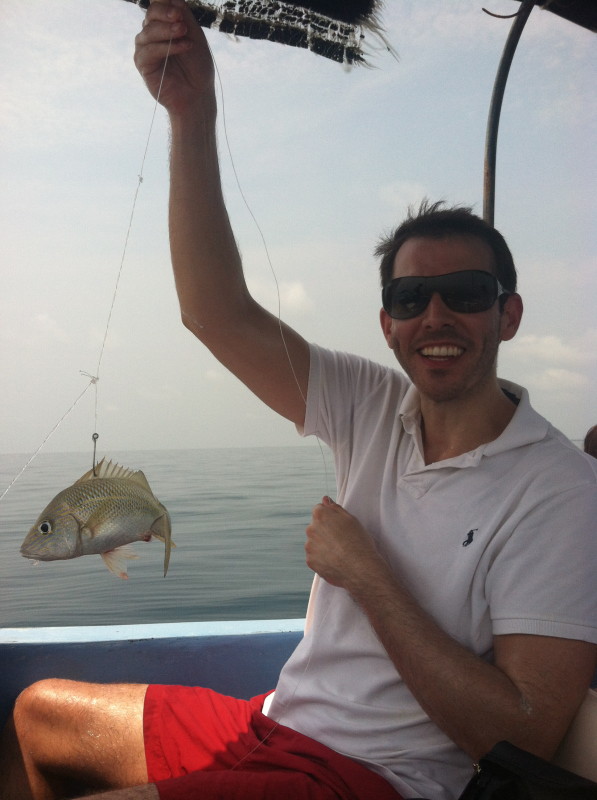 Our second adventure was recommended by another couple staying at our hotel. It was an all day fishing and snorkeling tour with See More Adventures led by two local guides named Boo and Buck. Charles describes them as the Belizian Jay and Silent Bob. We started off the a twenty minute boat ride to Bread and Butter Island, a small private island with a few cottages. There Boo caught the sardines for us to use as fishing bait. Then we went back in the boat and learned how to hand fish with just a string, a weight, and a hook. Charles and I each caught a fish. Then it was back to Bread and Butter Island for lunch. Boo and Buck made us a wonderful lunch of Salsa, BBQ Chicken (Buck’s special sauce is terriyaki, ketchup, and rum), one of the fish Buck caught, grilled potatoes, and Rum Punch. It was one of the best meals we had in Belize. While lunch was cooking we did some snorkeling. I saw some beautiful fish, but I saw even more fish while I was just standing still in knee deep water. It was a really great day and I would highly recommend it to anyone, even if you don’t really like fishing or snorkeling (like me) you will have a blast.

Our third adventure was a trip to see the Mayan Ruins at Xunantunich and Cahal Pech. I am an art history nerd who studied this stuff in college and thought seeing it in person was amazing. Many of the ruins in Belize have not been excavated yet and they are just large mounds covered by vegetation. I kept joking that since I took archaeology in college I would move there to excavate the ruins myself. Both Xunantunich and Cahal Pech were little cities with living spaces, markets, and ritual areas. 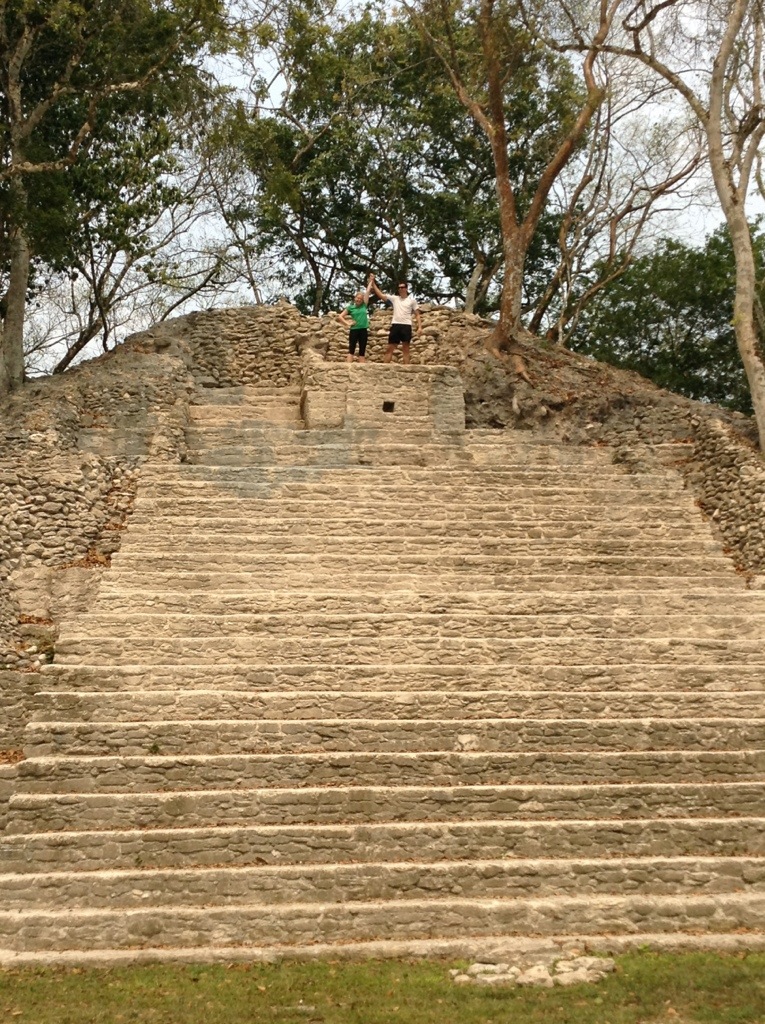 I sprinted up this ruin Rocky style despite 93 degree heat. Then we posed at the top.

Overall, we had a blast in Belize. I loved getting to do three totally different adventures. Belize attracts a mix of travelers. We met families, couples, and a mother-daughter pair. If you plan to bring kids make sure they are old enough to participate in the adventures you want to go on. There are some activities that are great for people of all ages, we met a couple grandmothers who went zip lining. Some of the more intense adventures like the cave tubing might not be good for all ages.

Be sure to budget for the adventures. Most cost between $70 and $120 a person. The Cave Tubing and Xunantunich tours were offered through Ian’s Anderson’s Caves Branch hotel which is affiliated with Almond Beach and Sleeping Giant. 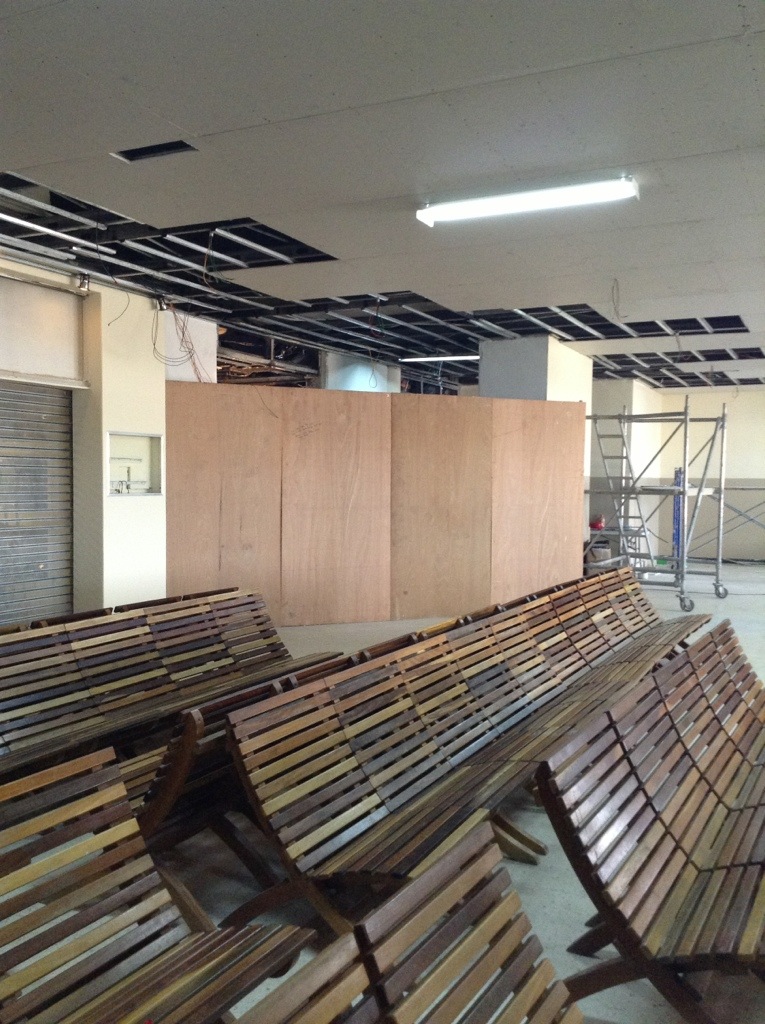 What was left of Jet’s Bar after the fire.

Unfortunately our trip ended on a bit of a sad note. I had a blast at Jet’s Bar at the Belize City airport while we waited 2 hours for our 15 minute flight to Hopkins at the start of our trip. We met lots of travelers and got some advice on what to do in Belize. I even met Jet himself. Just a few hours after our visit to Jet’s, it burnt down. A lady who works at the airport said that it happened in the middle of the night when only a couple of security guards were at the airport. Jet’s was a bit of an institution, and it was named one of the 10 best airport bars in the world. Hopefully it will be rebuilt.