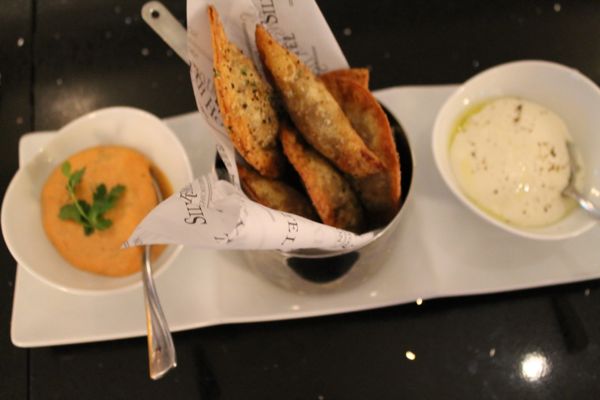 Adamus is one of the new additions to the loop dining scene, bringing life to an area that used to be a little too quiet. Adamus is tucked inside the newly renovated The Silversmith Hotel. They invited a group from the Windy City Blogger Collective to try the new seasonal fall menu. The menu was fall without being overly obvious – it wasn’t all pumpkin or squash; instead the Chef creatively played with fall flavors making apple flan, pork tenderloin, and pear salad. 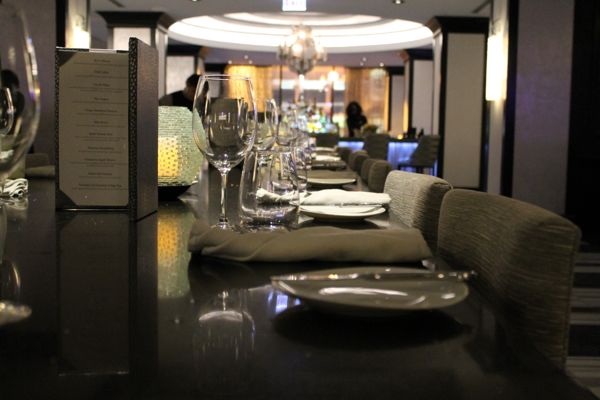 Adamus has a large bar in the center which divides the bar area ad dining room. The dining room has cozy separated seating areas along the side, and tall freestanding tables in the middle. We were seated at a long table in the middle.
We were served a selection of items from both the bar menu and the dining room menu. Dishes were served family style, letting us all try a little of everything. I think that family style serving is fun for big groups, since it creates conversation around the food. 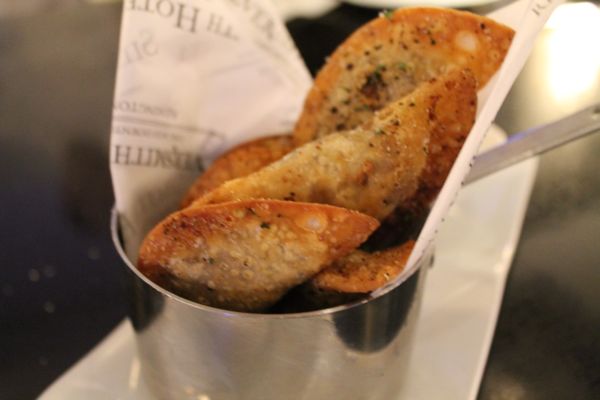 First up was the beef empanadas, which were in a lightly fried pastry crust. The empanadas were served with a roasted piquillo pepper remoulade and a horseradish creme. I enjoyed the contrast of the tender beef, the crunchy crust, and the creamy piquillo pepper dipping sauce. I could have eaten all of these myself. 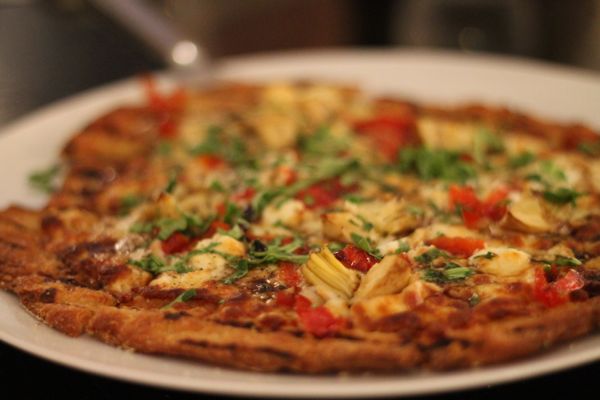 Next came a duo of flatbreads. The first was an artichoke heart and goat cheese flatbread with sweet peppadews and garlic cream. Artichokes are my favorite pizza topping, and this flatbread had a generous amount. I liked that they were the center of the dish. 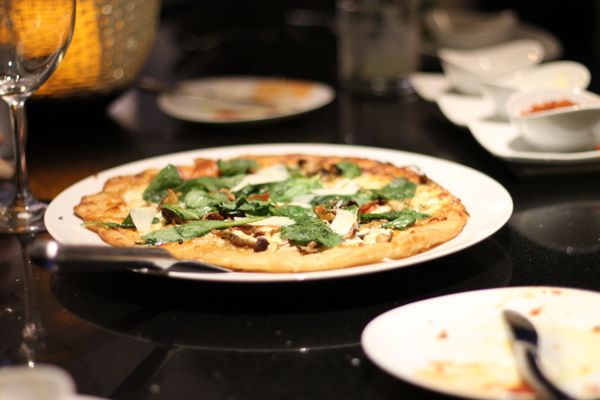 The second flatbread was a foraged mushroom flatbread with pancetta, baby spinach, parmesan, and truffle cream. Both flatbreads at a crispy crunchy crust, and were great for sharing. I liked how the flatbreads had just enough toppings to be interesting, without being complicated. 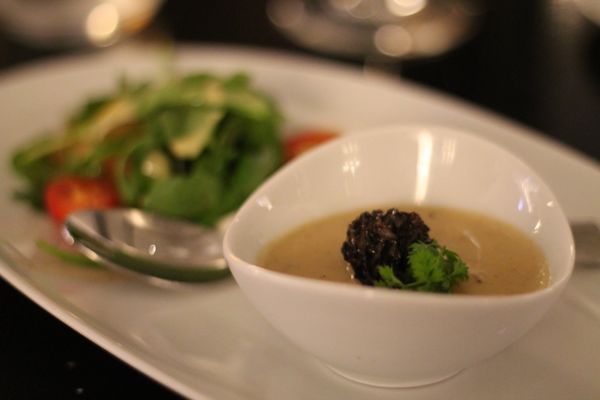 Then we had a sampling of the pear and goat cheese salad with arugula, almond, and a sherry vinaigrette, along side a white asparagus bisque with jumbo lump crab meat, morel mushrooms, and goat cheese. The asparagus soup was really creamy, and it definitely started some conversations. This was one of the crowd favorites. The salad was a fun blend of fall flavors and the sherry vinaigrette really pulled everything together. 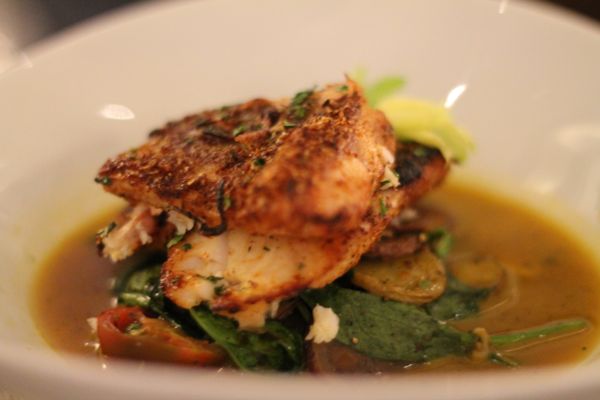 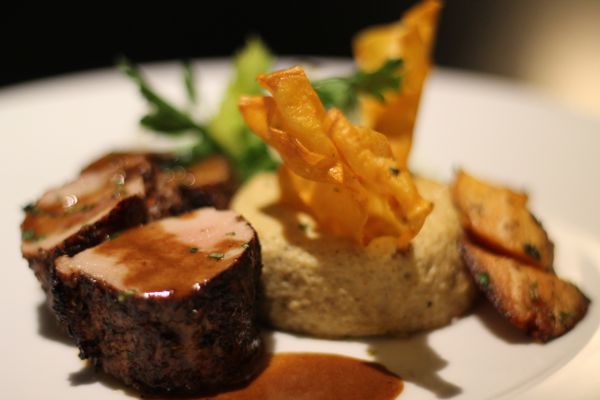 The second entree was pork tenderloin with roasted yam, mulled apple flan, and a ginger cream. The pork was perfectly cooked; it was slightly rare in the middle, and generously seasoned. My favorite part of this course was the apple flan. It was light, creamy, full of fall spices, and it complimented the pork. The flan might have been my favorite food of the night. 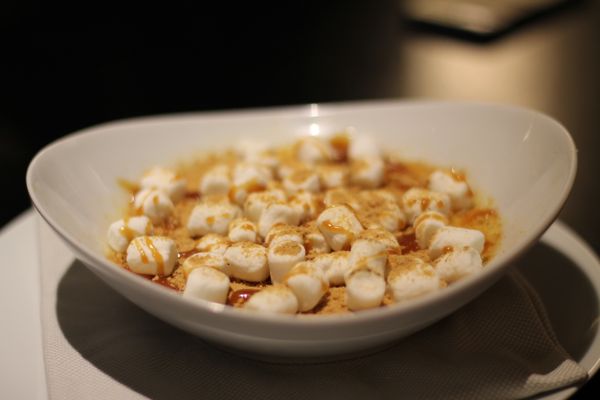 Our meal ended with two desserts. I tried the chocolate s’mores creme brulee. It was a creme brulee layered with chocolate, graham cracker, and topped with marshmallows. Every bite was quickly devoured. 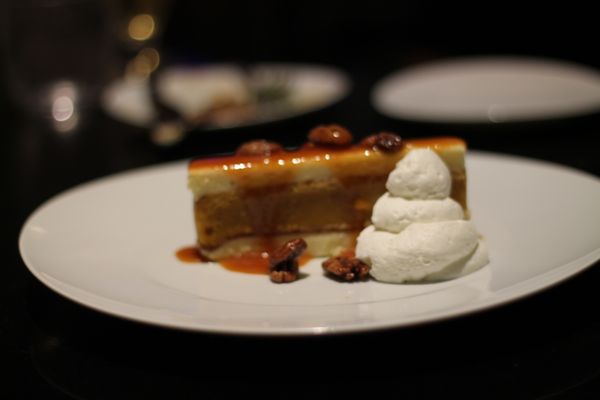 The second dessert, a pumpkin cheesecake with caramel sauce and candied pecans, was bursting with fall flavors. The pumpkin was layered between the cheesecake, and drizzled with caramel sauce. I thought that this was much better than other pumpkin cheesecakes where the cheesecake itself is pumpkin flavored. This layered version of the dessert had a better presentation, and the combination of flavors was delightful.
We had a fantastic night filled with inventive well executed food at Adamus. The menu is seasonal and on trend, while still being unique, a challenge in a city where some menu’s can be a bit cookie-cutter.
Adamus is located right in the loop, on Jeweler’s Row beside the Madison and Wabash train stop at 10 South Wabash Avenue. The restaurant does accept reservations.

Yum! This looks so good! I had the pork belly sliders at the Adamus #wcbchh and I wish I had ordered two portions. Delicious. Katharine www.paytington.com