I love getting restaurant recommendations from Instagram connections, and Pok Pok was suggested multiple times. The restaurant is in the East Side of Portland on Division Street, a neighborhood filled with boutiques and restaurants. Pok Pok is considered to be hands down the best Thai restaurant in Portland, and it is the best Thai food that I have ever tasted.

I sat at Pok Pok’s small bar, which was filled with people tossing back cocktails and eating wings. Pok Pok is famous for their wings, but since I was dining alone, it didn’t seem logical to get an order of wings. If you have someone to share them with, order them. They did look (and smell) incredible.

Pok Pok is also known for their drinking vinegars, which come in sweet and savory varieties including passionfruit, ginger, cherry, and cucumber. You can add soda and liquor to turn the drinking vinegars into a cocktail. 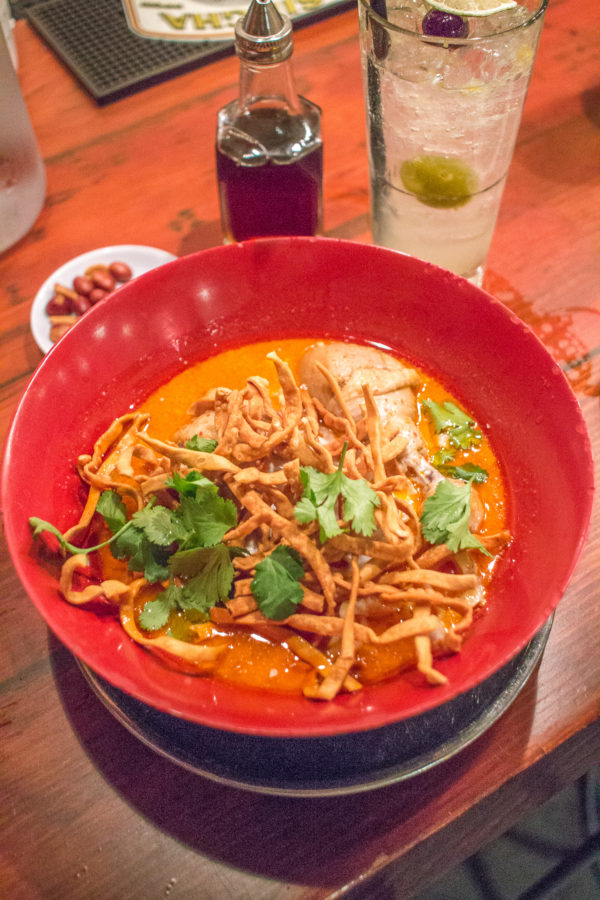 A good number of the items on Pok Pok’s menu are intended for sharing. The bartender recommended that I pick from the offerings of One Plate Meals. I selected the Khao Soi Kai, a mild Thai curry soup native to Northern Thailand. It is made with Pok Pok’s curry paste and coconut milk so it is both spicy and creamy. The spice level was just at the level where the curry added flavor without being overpowering. It came with garnishes including pickled mustard greens, shallots, and chili paste. The soup itself has both soft and crispy yellow noodles plus a chicken thigh and drumstick. It was somewhat of a messy meal (so maybe don’t order it on a date) but that didn’t stop me from devouring every bite.

There are a few things you should know about Pok Pok. The restaurant’s Chef Andy Ricker received the James Beard Award for Best Chef Northwest in 2011. Plus, Pok Pok has a few locations in Oregon, plus a restaurant in Brooklyn.

Whiskey Soda Lounge, a bar that serves appetizers, is Pok Pok’s sister restaurant. I grabbed a drink there while I waited for a spot to open up at the bar at Pok Pok. The two restaurants both serve the famous wings, and some of the same cocktails.

The cocktail menu at Whiskey Soda Lounge is inventive with a Thai twist. Many cocktails involve whiskey, and there is an impressive whiskey selection, but the menu has many items beyond whiskey. I had the Deviation, a cocktail made with gin, maraschino liqueur, lemon juice, and cherry juice. It had just the right amount of sweetness.

My friend Cait is one of those chicks who knows her stuff. Whether it is restaurants or where to buy the best men’s jeans for Charles, I have learned to listen to her. So when Cait told me to dine at Le Pigeon, I followed her instruction. Le Pigeon is funnily named since it isn’t pronounced with the French accent the “Le” suggestions. The restaurant is so well known that locals immediately corrected me when I mispronounced it. Le Pigeon’s Chef Gabriel Rucker has received two James Beard Awards, one for Best Chef Northwest in 2015 as well as the Rising Star Chef of the Year Award in 2011. The awards hang proudly to the side of the open kitchen, above the bar.

Le Pigeon’s small space can hold no more than 36 diners and the small open kitchen in the center of the space is the beating heart of the establishment. I was happy to have a seat at the bar around the open kitchen so that I could watch the chefs in action.

The diners around me were all ordering the Chef’s Tasting Menu, but I couldn’t resist trying the Beef Cheeks with Farro and Fried Broccoli. I love farro and broccoli, but they are honestly the only foods that Charles refuses to eat – so it was meant to be and I had to order it. 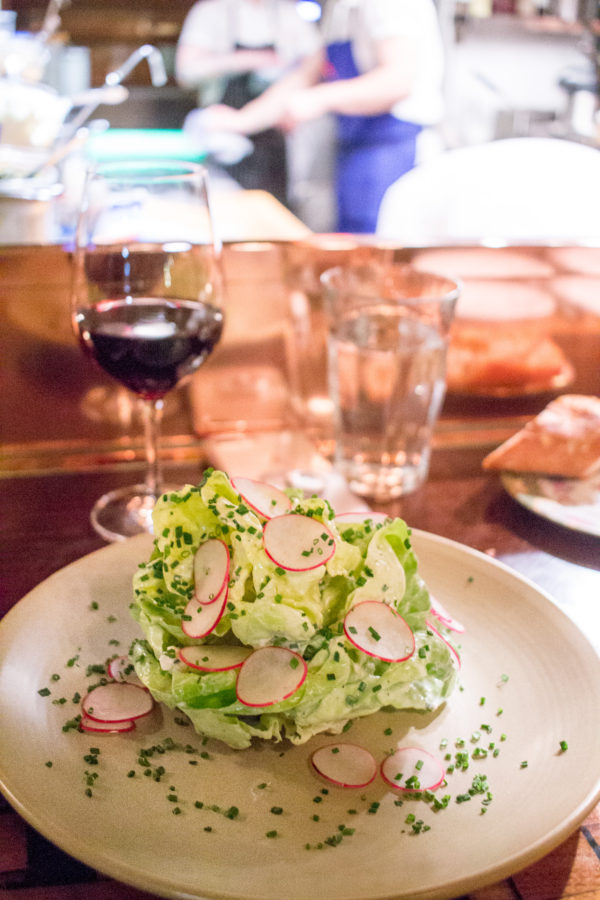 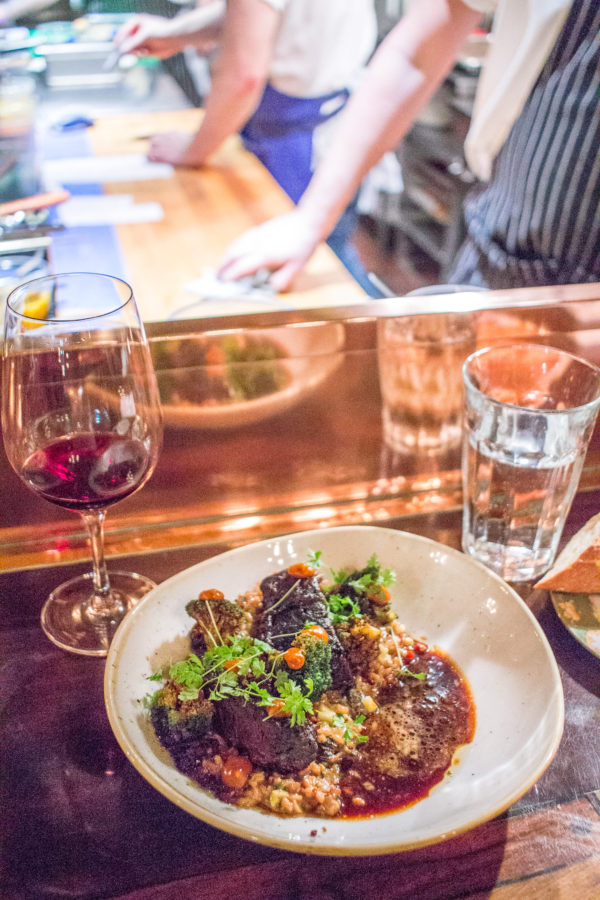 The beef cheeks practically melted in my mouth, and I loved the toothsome quality of the farro. It reminded me of just how much I have missed it. And in case you were curious, frying broccoli is an exceptionally delicious preparation that cooks the broccoli while allowing it to retain its crispness. 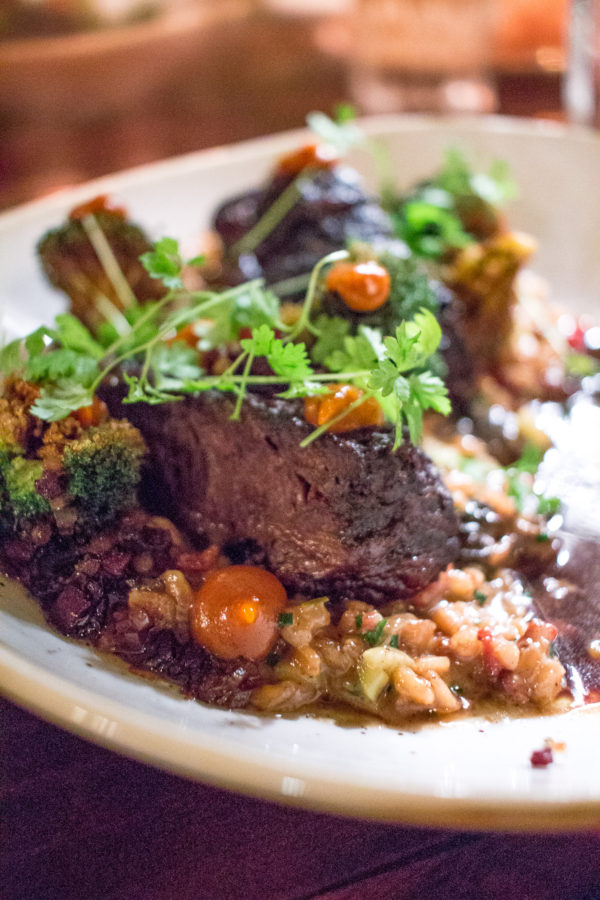 Beef cheeks are a signature item at Le Pigeon and they are always on the menu in some shape or form. If you haven’t had beef cheeks, which I understand because they can be hard to find, they are as tender as short ribs, yet leaner. They are bites of heaven and I order them whenever I spot them on a menu… which brings us to the next restaurant I visited.

A local food blogger, Mary from The Kitchen Paper, suggested that I go to Besaws for brunch. Perhaps the most important thing to know about Besaws is that they serve brunch 7 days a week. I went on a Monday and got a table no problem, but I am guessing the place is packed on weekends. 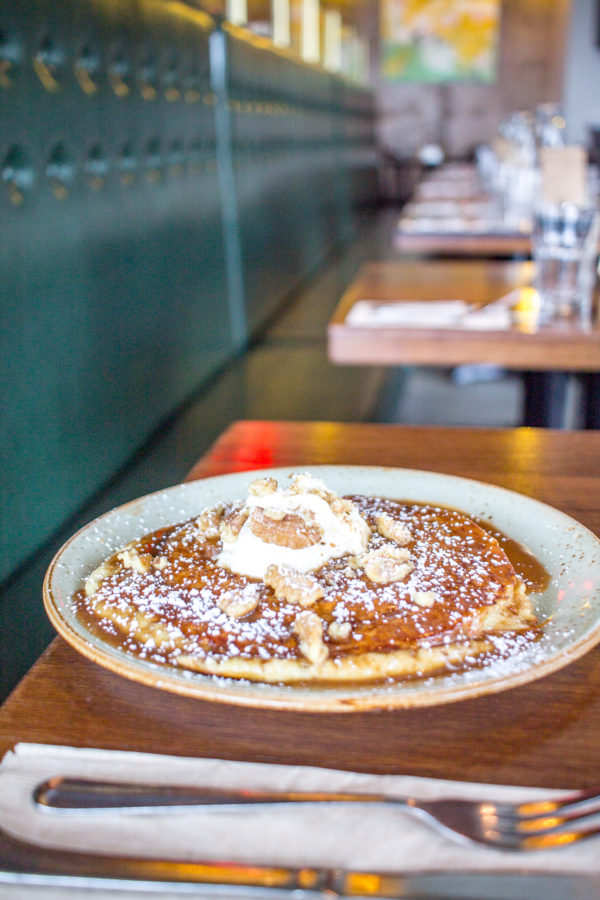 Besaws has been around since 1903, and what was once a scrappy little neighborhood café became an elegant Art Deco restaurant after urban development forced Besaws to relocate. The emerald green banquets, bold floral wallpaper, and large bar with golden accents balances classic and trendy. Besaws is comfortable not pretentious, so much so that I hung around to read a couple chapters of my book while sipping tea. 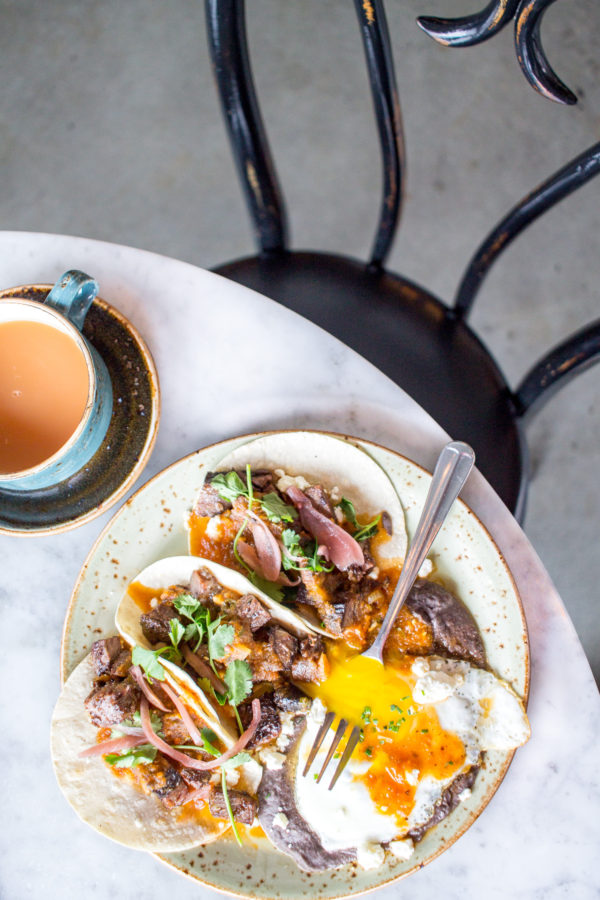 The first thing that I saw on the menu was beef cheek tacos. Yes, I had ordered beef cheeks at dinner, but finding beef cheeks on a menu is so rare that I had to order them again. The meal consisted of three beef cheek tacos served with a side of refried beans and a sunny side up egg. I added the beans and egg right to the tacos and loved every bite. 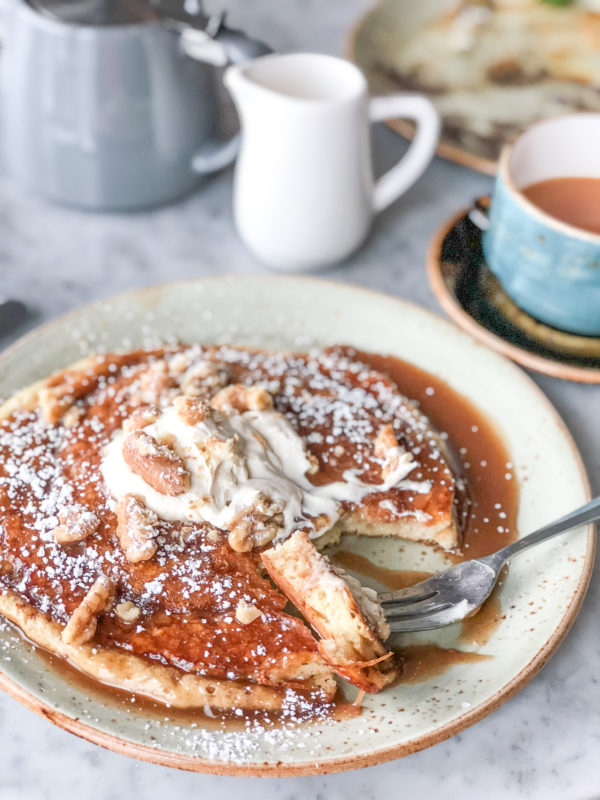 I am often torn between ordering a sweet or a savory brunch. Since I was about to embark on a day of hiking and exploring, I decided it only made sense to order a two course brunch. The waitress told me that the Dream Cake is her favorite. She described it as a pancake that tastes like a cinnamon roll, which was enough to convince me. It reminded me of the cinnamon swirl pancakes at Ruby Slipper in New Orleans, since the pancakes taste similar and are some of the best pancakes I have tasted. I am on a mission to recreate them at home.

There was a brief wait for a spot at the Le Pigeon bar, so I had a glass of wine at the Douglas Fir Lounge while I waited. The Douglas Fir Lounge is a retro style bar that feels like it belongs at an impossibly cool campground. The bartender is one of the extremely few men who can pull off braided pigtails.

It is the type of place where everyone at the bar joins in conversation, so even if you walk in by yourself, you won’t be drinking alone. We found ourselves in an in depth conversation about doughnuts, which the pigtailed bartender ended by declaring Blue Star to be the best, with Pips being second, and Voodoo being overrated. (Sadly I didn’t get doughnuts on this trip). 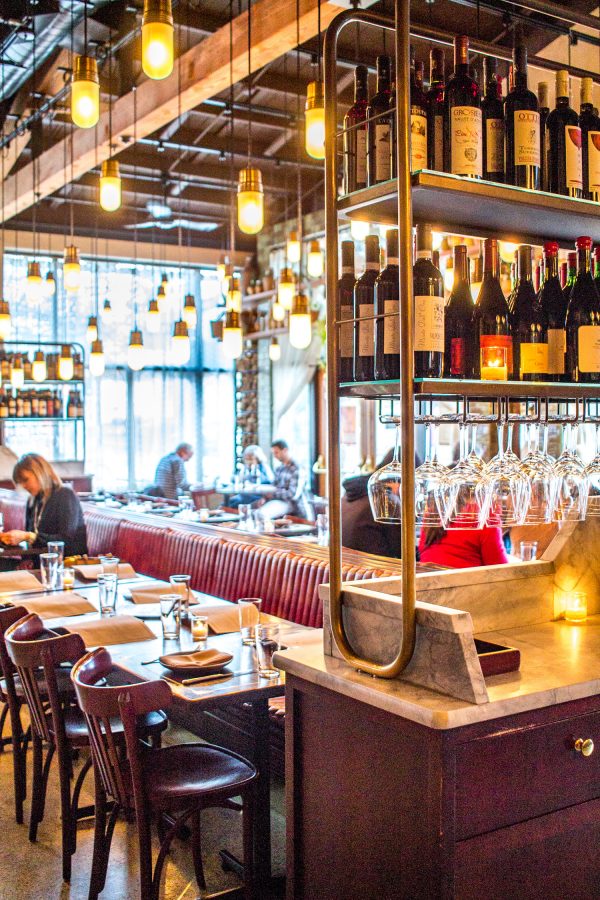 Ava Genes is an Italian restaurant on Division Street in East Portland, almost diagonally across the street from Pok Pok. I headed in and grabbed a seat at the bar for an early meal on a Monday night before my flight home. The restaurant has a romantic atmosphere thanks to the many lights hanging above the dining room and the exposed wood beams meets marble rustic/chic décor. It is definitely a place you would bring a date.

I didn’t have a date, but since I arrived just after 5pm, I had the entire bar to myself and befriend the bartenders. They were so kind that when I asked about the red wines they immediately offered me three tastes of wine so that I could pick the perfect glass – I assure you that I would never request three tastes of wine, they insisted. 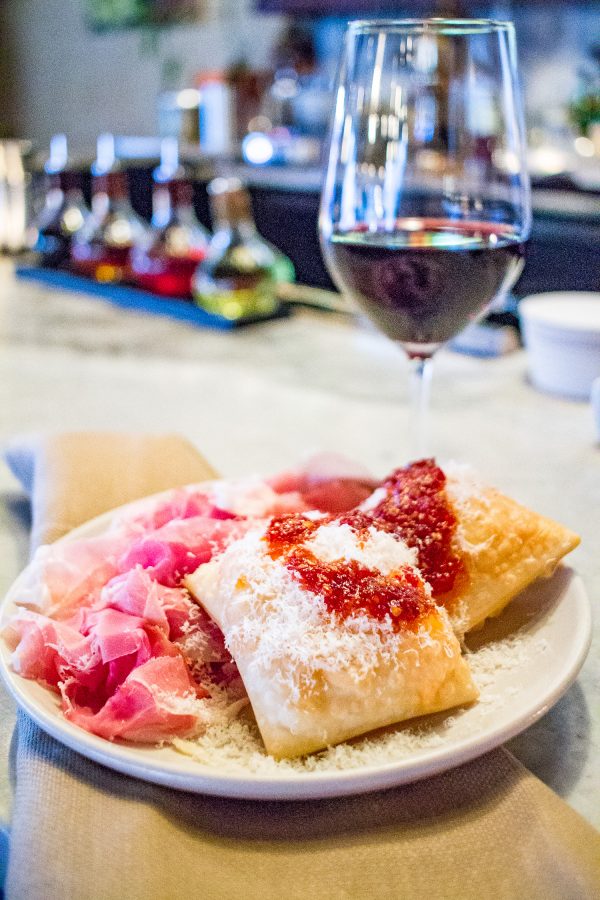 I began with the gnocco frito, pillows of lightly fried savory pastry filled with cheese and topped with a sweet and spicy chili honey, and served with super thinly sliced hand-crank sliced Prosciutto de Parma. The prosciutto melted in my mouth – this extra thin sliced prosciutto is referred to as “meat butter” by the bartender, and I can’t help but to agree. It went perfectly with the house Prosecco, the light effervescent bubbles of the Prosecco and the fatty prosciutto are a match made in heaven. 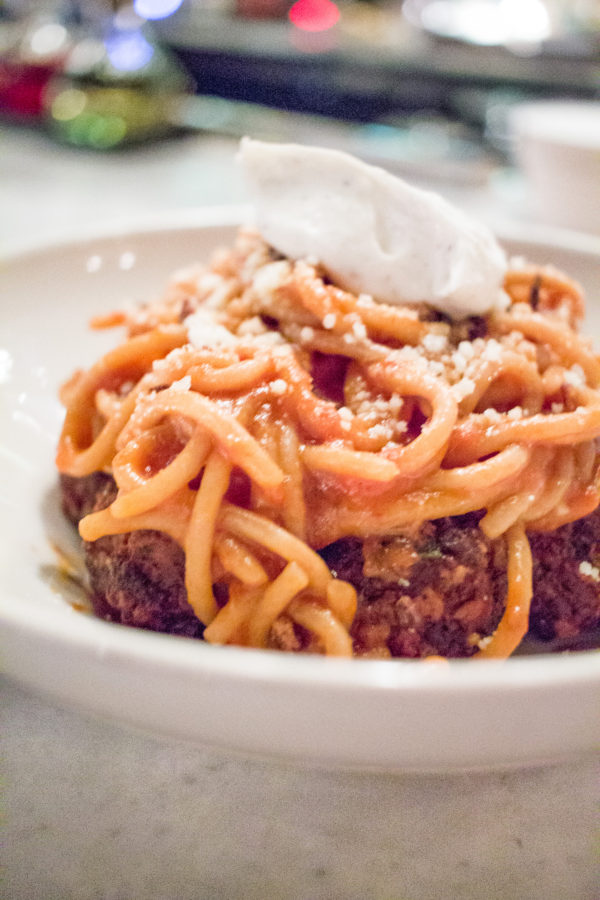 The Monday special at Ave Genes is spaghetti and meatballs, so I saw it was a sign and ordered it. The pork and beef meatballs come topped with a generous amount of house made pasta. This meal is definitely a reason to go to Ave Genes on a Monday.

Speaking of Mondays, one of the reasons why I was able to get into such wonderful Portland restaurants is that I was there Saturday – Monday. Restaurants are usually packed on Friday nights, while Monday tends to be a slow night. By traveling Saturday – Monday instead of Friday – Sunday I am able to get into better restaurants. The other reason why I got into top restaurants with reservations was that I was traveling alone, which makes it easy to grab a spot at the bar.

Have you been to any of these restaurants? Did I miss any of your favorite Portland, Oregon restaurants? Let me know in the comments.