Siem Reap, Cambodia is a bucket list destination where you will find Angkor Wat. Here is my guide of what to do in Siem Reap. 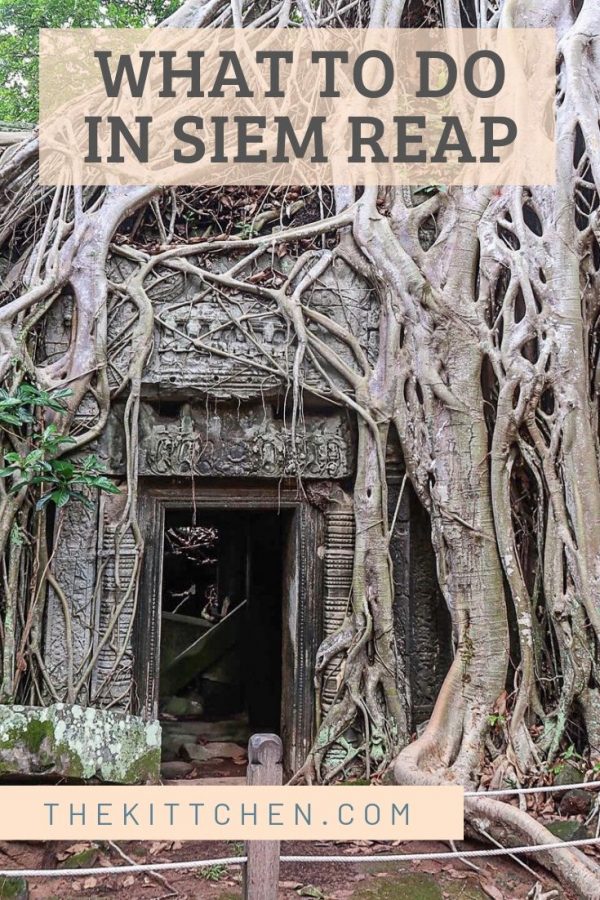 The thing that you might not know about Siem Reap is that Angkor Wat is just one of about 50 temples in the city and 200 temples in the region. Oh, and the temple from Tomb Raider is real.

What to do in Siem Reap: 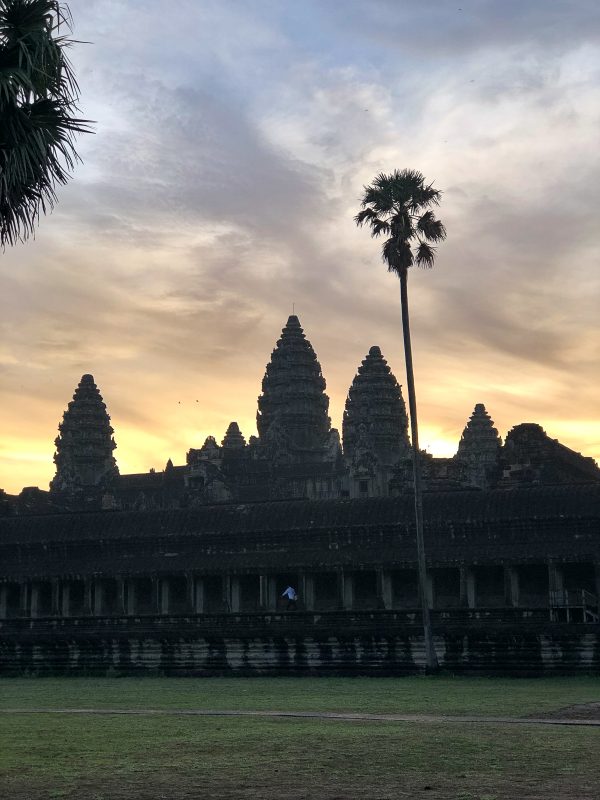 Angkor Thom translates to “great city” and it was the capital of the Khmer Empire. The massive complex with over 50 temples and structures was built in the late 12th century and abandoned in the 17th century. You could very easily spend an entire day to two here. I visited some of the most well-known sites within Angkor Thom: Victory Gate, Elephant Terrace, and Bayon temple. 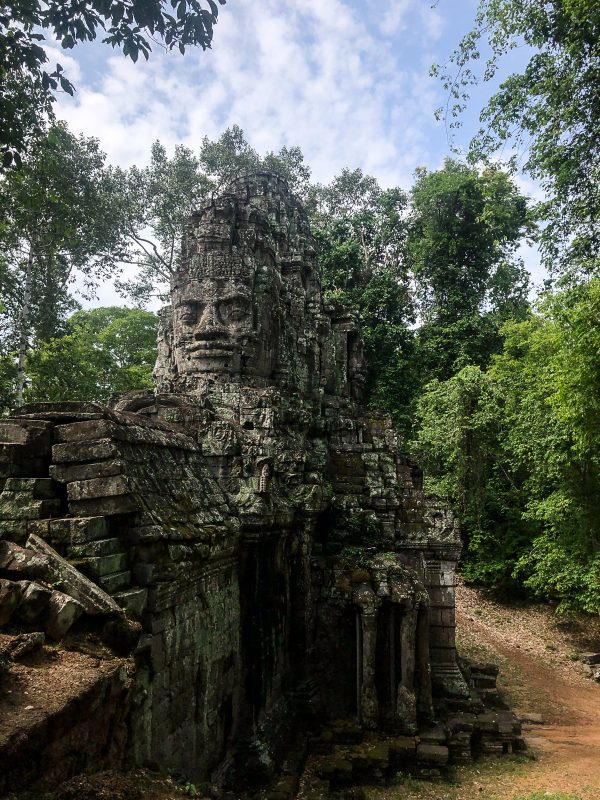 Victory Gate is one of the five gates along the Angkor Thom city wall. This is the gate that the military would depart from on their way to battle. 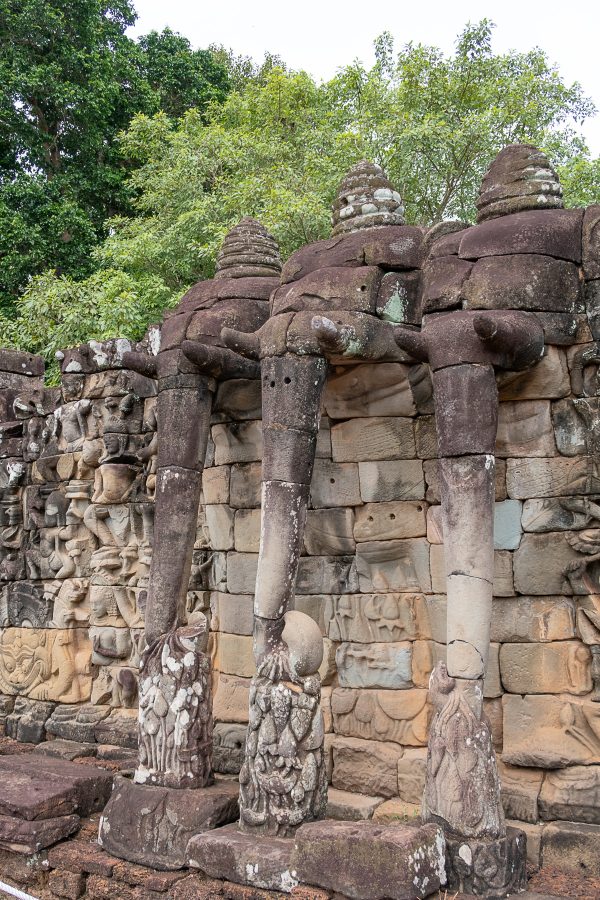 This is a quick stop because it is a smaller site. It’s worth seeing the bas-relief depictions of elephants and the large three-headed elephant sculptures. This is where the king would come to see military demonstrations using the elephants that were trained for war. 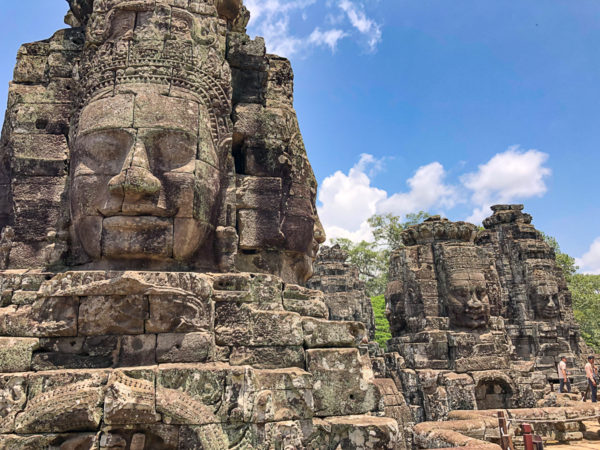 Bayon is one distinctive for the three-dimensional images of faces that are included in the architecture of the towers. In total, 216 large carved faces decorate the temple. The temple was built in the late 12th century or early 13th century by a Buddhist king of the Khmer empire. In the mid-13th century, under the rule of a Hindu king, the temple was altered. 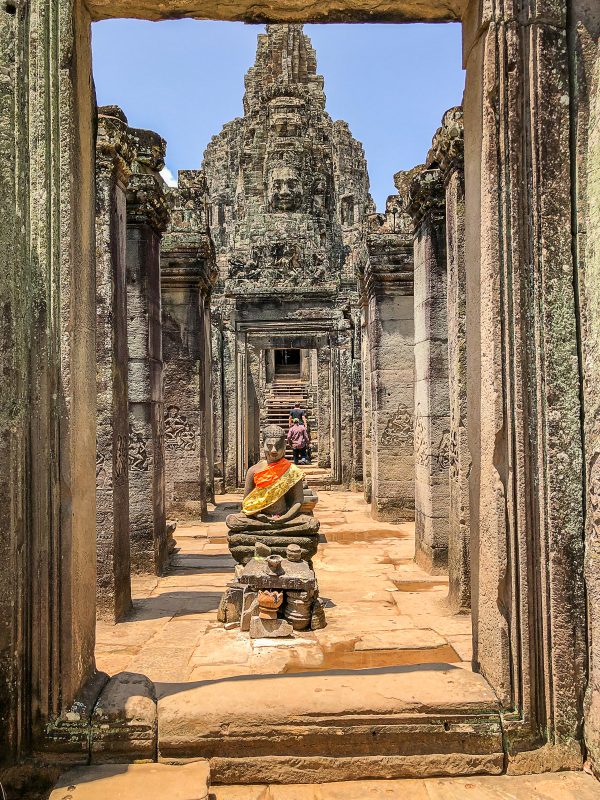 One of the most fascinating things to see is the bas-reliefs that depict daily life during the time of the Khmer Empire. This is a large maze-like temple and you can easily get lots in admiring it and discovering it. 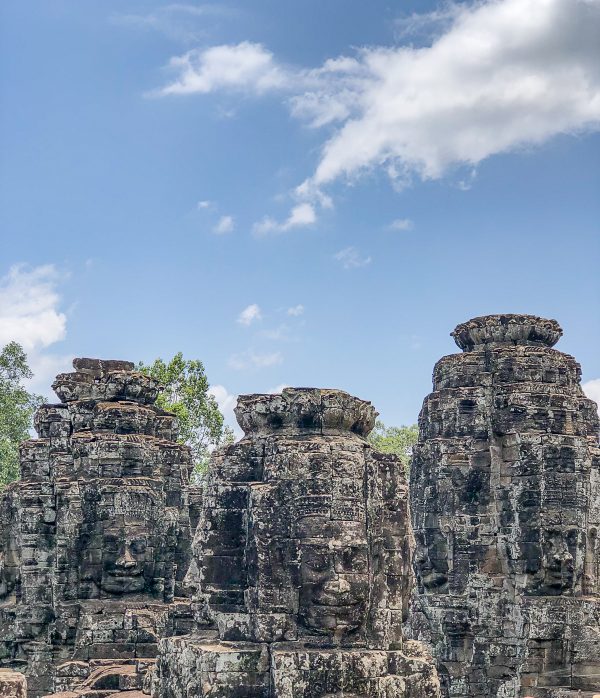 It is one of the more popular destinations for tourists in Siem Reap. If you want to see it without tourists, try to get there right when it opens to the public, or in the afternoon (most tour groups avoid the afternoon heat). 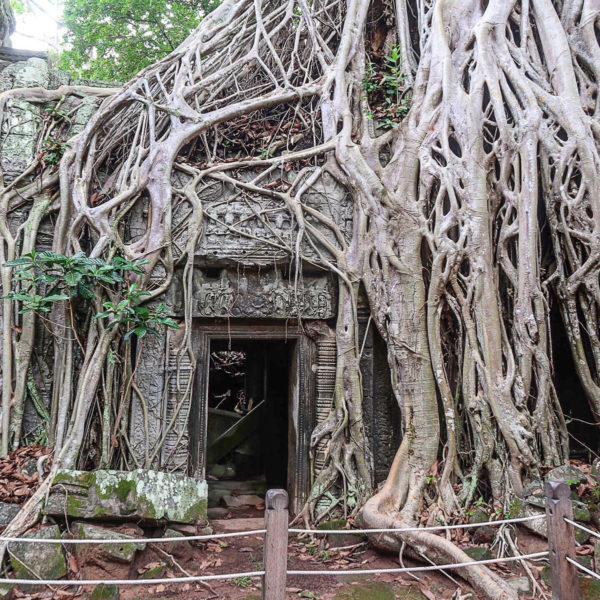 Made even more famous when Tomb Raider filmed here, Ta Prohm was built as a Buddhist temple and was then converted into a Hindu temple. It was constructed in the late 1100s, and after the fall of the Khmer Empire in the 1500s, Ta Prohm was abandoned. 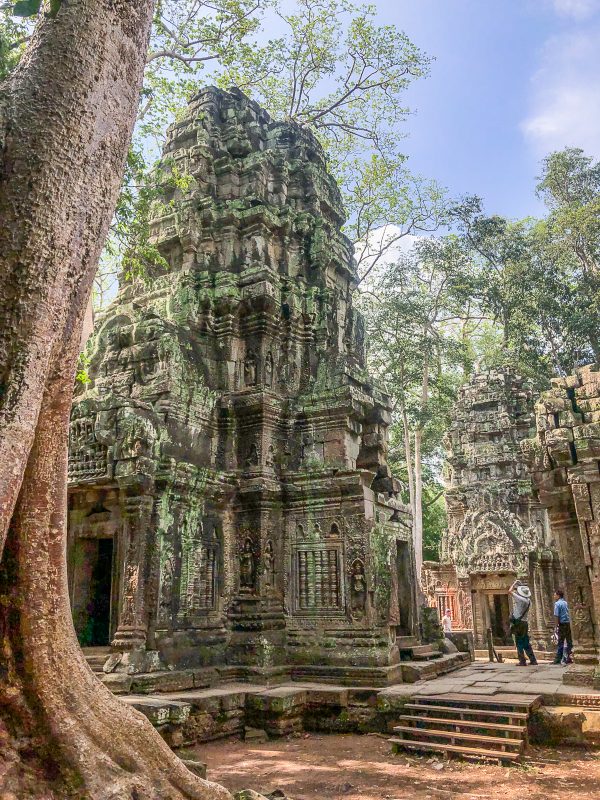 Nature has since reclaimed the land. Today, large trees grow out of and over the temple complex. It’s hauntingly beautiful, and work is underway to preserve the current state of Ta Prohm. 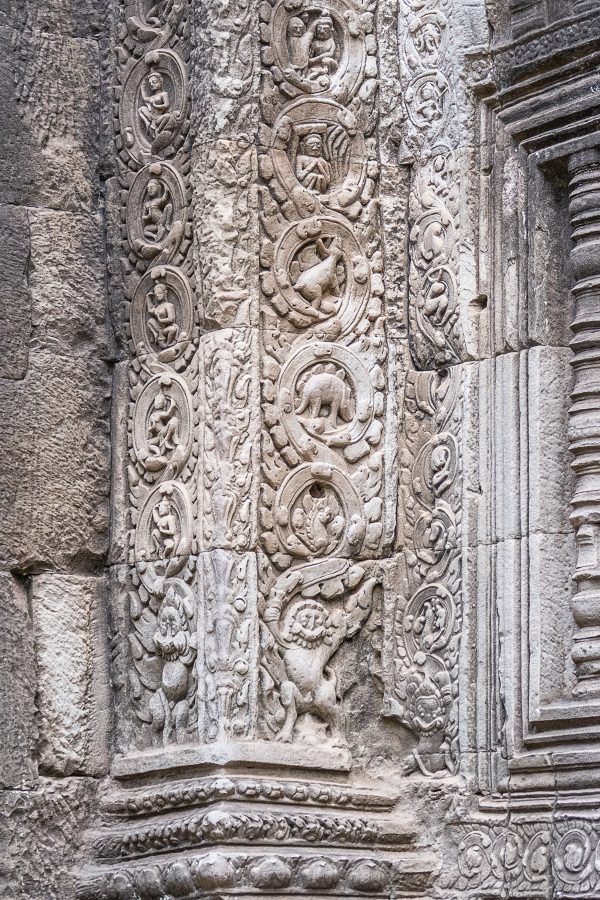 One of the bas-relief carvings is well-known for resembling a stegosaurus, but it is actually a rhinoceros or a wild boar in front of a plant. 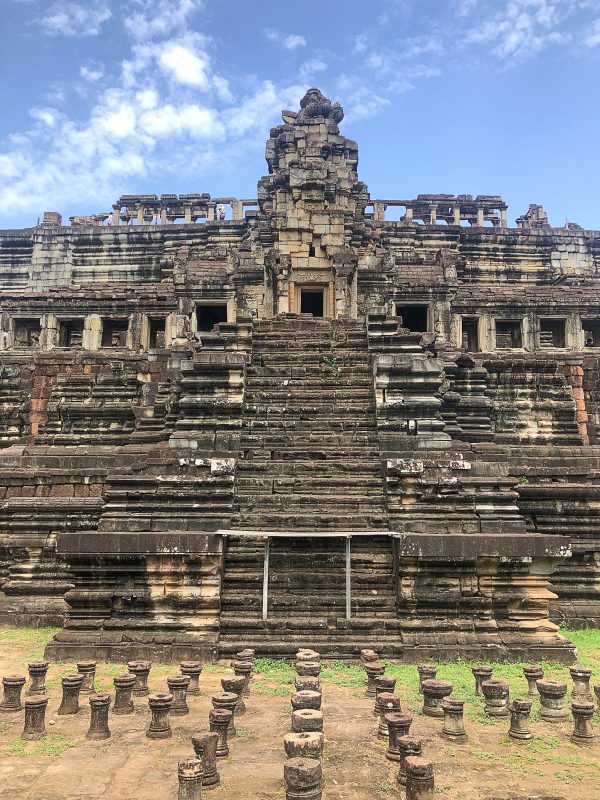 Located just outside Angkor Thom and constructed in the 11th century, this large temple remains unfinished. It is a mountain style temple with interior galleries and tiered platforms. Work on Ta Keo stopped after just a small amount of the exterior carvings were completed. 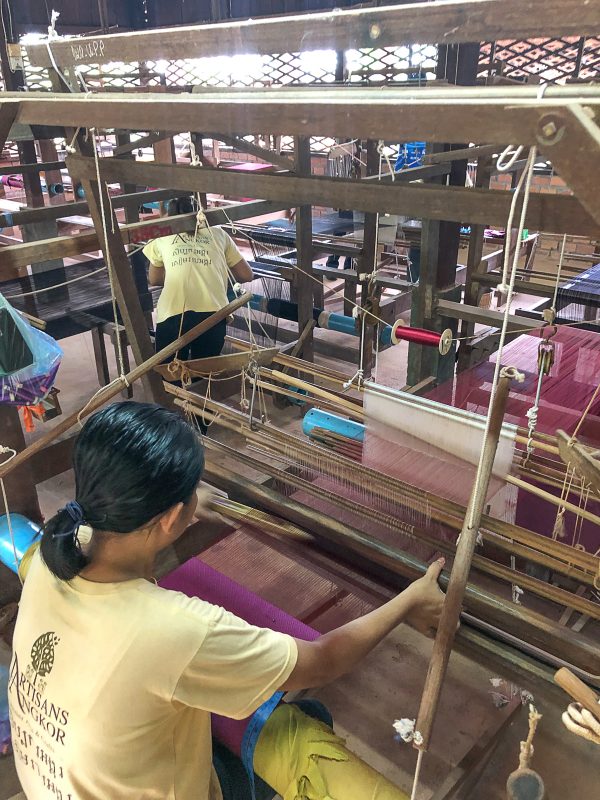 This artists’ collective pays its employees fair wages and provides healthcare, and it is the place to learn about how silk is made. Tours will show you the process from start to finish, and you get to see women using looms to weave scarfs and fabrics. It’s more fascinating than I had expected.

The market has a mix of clothing (like elephant pants), food, and other goods. Part of the market is geared towards selling household essentials to locals, and part is aimed at tourists.

Just off Pub Street, you will find the night market. This market sells clothing and souvenirs from 5 pm until late at night. 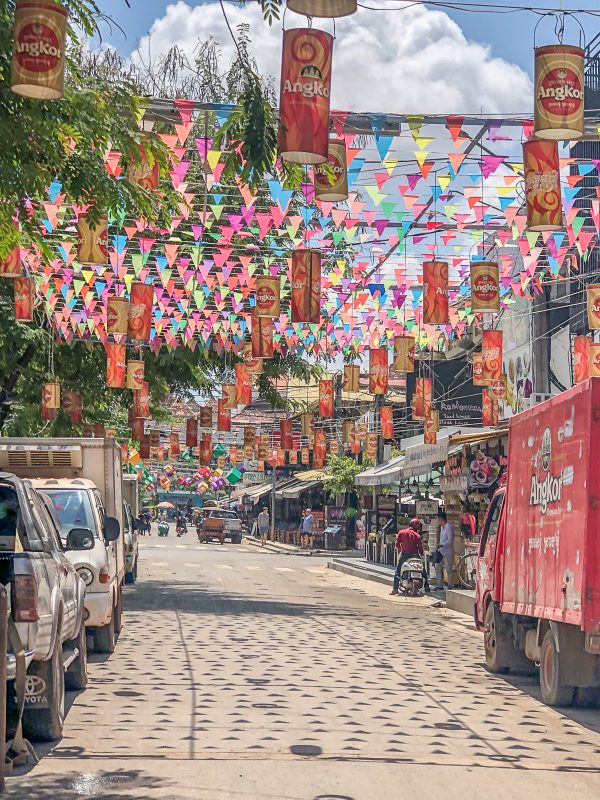 This street is the nightlife hub of Siem Reap. It’s right downtown beside the Night Market and it’s a fun place to hang out in the evenings. Most happy hours offer draft beer for less than $1 and there are a wide variety of restaurants. You can try traditional Khmer cuisine, or if you need a break from Cambodian food you can have Mexican, Greek, Italian, or American food. Per a locals suggestion, I tried Il Forno which has very good authentic Italian food. 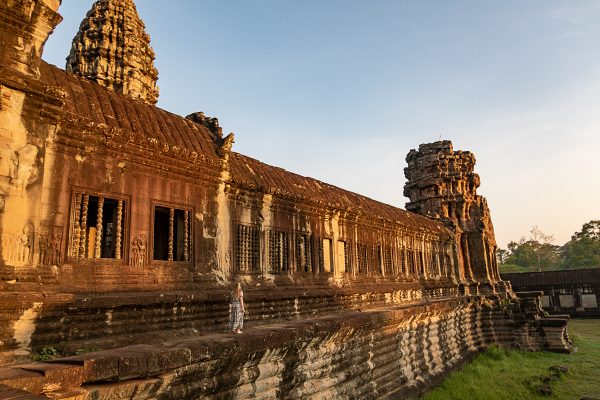 What to Know Before You Go to Cambodia:

USD is the currency of choice in Siem Reap. People will give you your change back in US dollars too.

Child exploitation is a big problem. At one point mothers were charging tourists to take photos of their naked children as they draped snakes over their shoulders.

People are constantly trying to sell you something. It can get exhausting. When I was going to the floating village a creepy man took my photo as I got on the boat. I made him delete it. When I got off the boat a young girl, maybe about 6 years old, came over holding a plate with a terrible photo of me on it and she insisted that I buy it. I didn’t.

I don’t want to sound negative, but I know that people come to me for honest opinions and I think it would be irresponsible not to mention these issues. 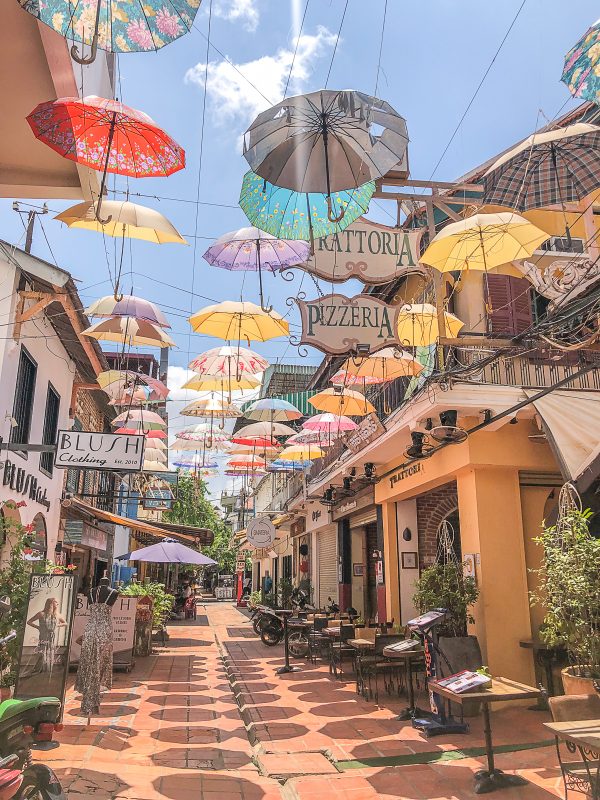 Angkor Wat Travel Guide
What to do in Phnom Penh
Hello from Cambodia!