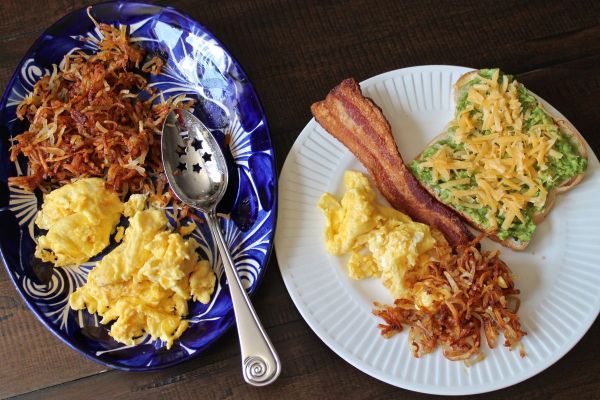 Want to impress houseguests without spending much time in the kitchen? I created this simple summertime brunch menu based on some very specific requests Charles made regarding breakfast one morning. He wanted scrambled eggs, spicy hash browns, bacon, and avocado toast. It was a small feast, but it was also really quick and easy to prepare.

In case you are curious… these photos are of our breakfast for two. We were really hungry that day (and we might have been out pretty late the night before). 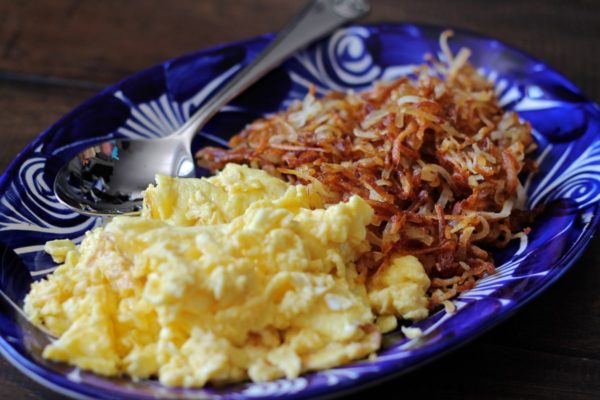 For the hash browns, I used store-bought shredded potatoes, and toasted them in butter and seasoned them with salt, pepper, and chipotle powder. Adding just a touch of chipotle boosts the flavor of the potatoes, or you can add more to make the potatoes nice and spicy. The potatoes do take some time to crisp up, so start cooking them first. After about 15 minutes of cooking over medium heat the potatoes will be crispy and golden, and I swear they can cure a hangover.

Once you get the potatoes cooking, bake some bacon in the oven at 425 degrees. I bought double thick cut bacon, so it took about 12 minutes to cook.

I like to make cheesy, fluffy scrambled eggs. I add a splash of cream to the eggs, and whisk them for a minute. I melt enough butter to coat the bottom of a skillet, then I add the eggs, sprinkle in salt, pepper, and grated cheddar, and then I gently stir the eggs until they are cooked.

The final step was making simple avocado toast topped with some cheddar cheese. I mash avocado with a touch of olive oil, a squeeze of lemon, and a dash of salt and spread it over toast. Charles was very specific about wanting the cheese on the avocado toast, and it was a nice addition.

You can crumble the bacon and add the bacon and eggs on top of the avocado toast making on open-faced breakfast sandwich, or you can eat everything on its own. It’s up to you.