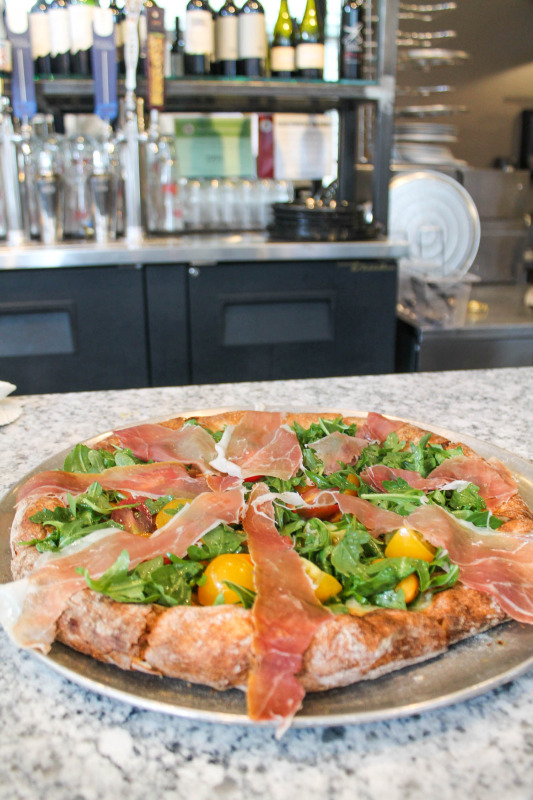 When Robert Garvey moved from Queens to Chicago he noticed a lack of thin crust pizza places, and he began a personal mission to come up with the perfect pizza dough recipe. Initially he thought the project would take a few weeks, but it took 15 years of careful recipe testing, and a Pizziolla certification from Scuola Italiana Pizzaioli before the dough recipe was perfected. Today Robert and his wife Dana are opening Robert’s Pizza in Streeterville. 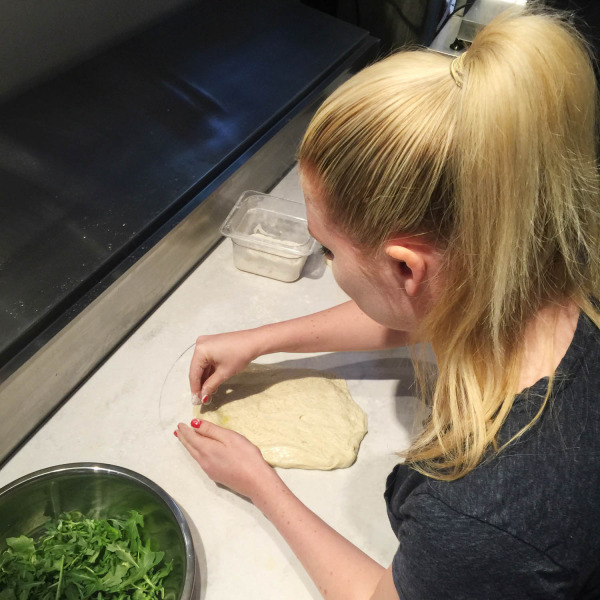 I was invited to get a sneak peek at the restaurant and I was surprised by the size of the space. The first floor has a long bar and high top tables, and two upper levels offer smaller seating areas perfect for groups. After touring the space it was time to make some pizzas. Robert explained that the dough is made two days ahead of time so that it can ferment. The dough is carefully handled so that tiny air pockets are created. 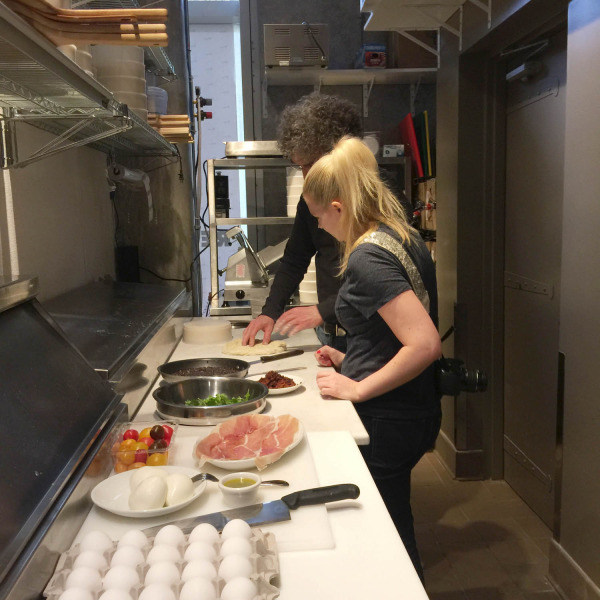 Robert uses a technique of pressing the dough with this fingertips, starting in the center of the pizza, to create a thin center of the crust, and a firm, yet doughy edges. 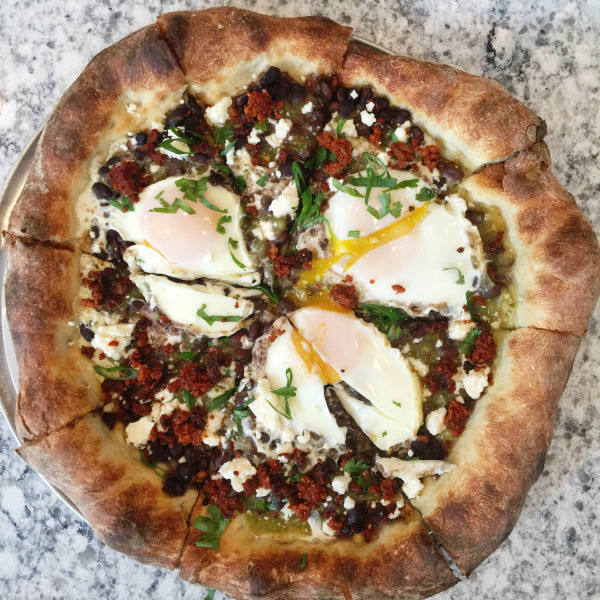 The first pizza we made with Huevos Rancheros. Yes, they have taken one of my favorite breakfasts and transformed it into a pizza. 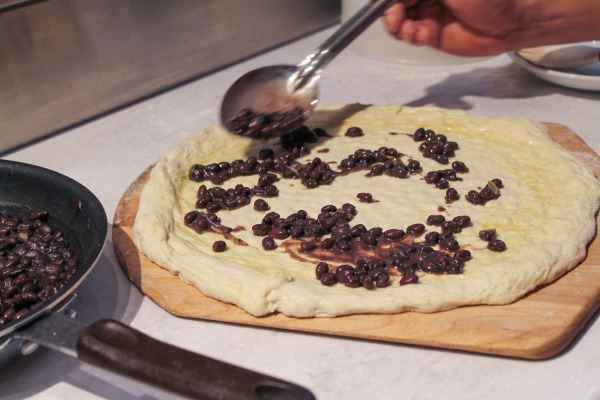 Once the dough has been prepared it gets topped with a thin layer of olive oil and seasoned black beans, and then baked for 2 minutes in the 600 degree pizza oven. 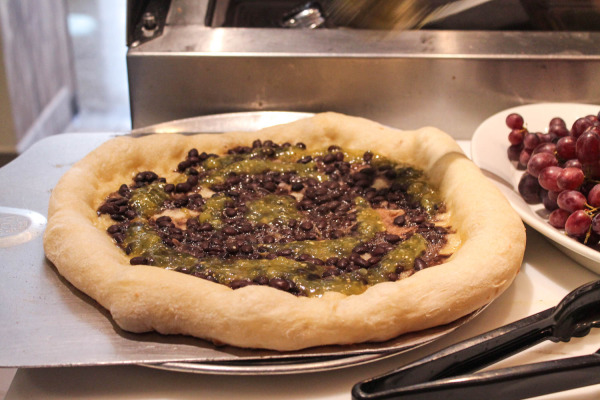 The pizza is taken out of the oven and green tomatillo salsa and fresh eggs are added. 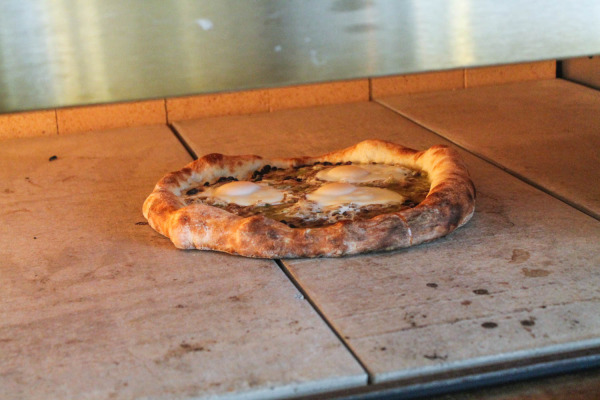 The pie bakes for another 4 minutes and is finished off with crumbled chorizo, queso fresco, and cilantro. 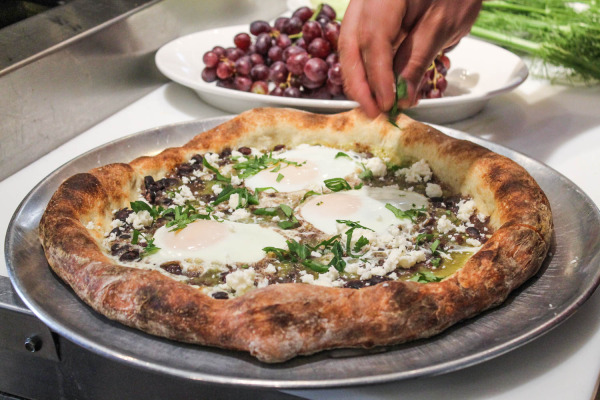 The technique of baking the pizza for two minutes before adding the eggs works. The eggs were perfectly cooked, the whites were solid and the yolks were runny. 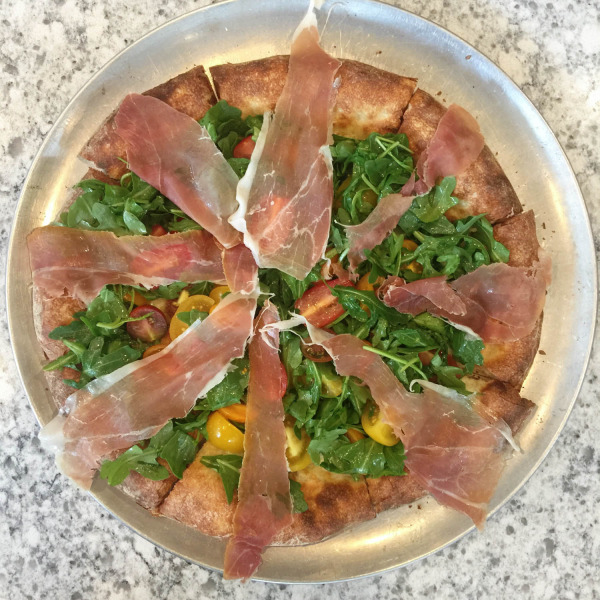 Next we made a salad pizza. The concept is a simple white pizza with a tomato and arugula salad and prosciutto di parma on top. While some pizzerias serve pizza with arugula and prosciutto on top, Robert’s Pizza puts a full salad on top of the pizza, not just a handful of greens. The prosciutto is draped over the crust so that you can hold it in place with your thumb and get some prosciutto with every bite. 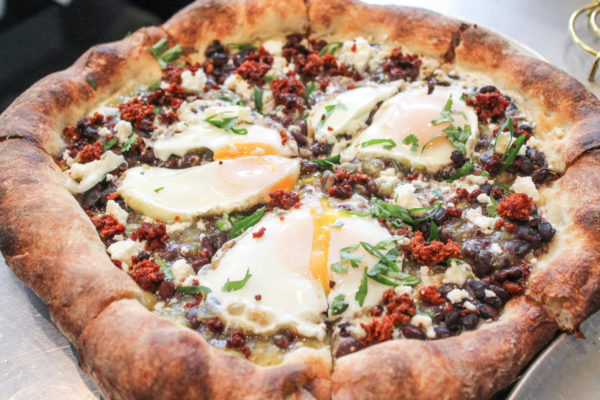 I appreciate that while Robert’s Pizza takes their dough very seriously, they have a playful approach to pizza toppings. The hues rancheros and salad pizzas were excellent and creative, and I am excited to try their other creations like Roast Duck Pizza and dessert pizza. If you prefer traditional pizza, they do that too; they have a menu that will satisfy all thin-crust lovers.

Robert’s Pizza‘s address is 355 East Ohio. They are right by the AMC River East, making it a perfect place to grab dinner before a movie.