My Reduced Fat Pumpkin Cheesecake is has a layers of pumpkin filling and a fresh creamy yogurt cheesecake. It’s a lighter healthier dessert to serve your family this Thanksgiving. 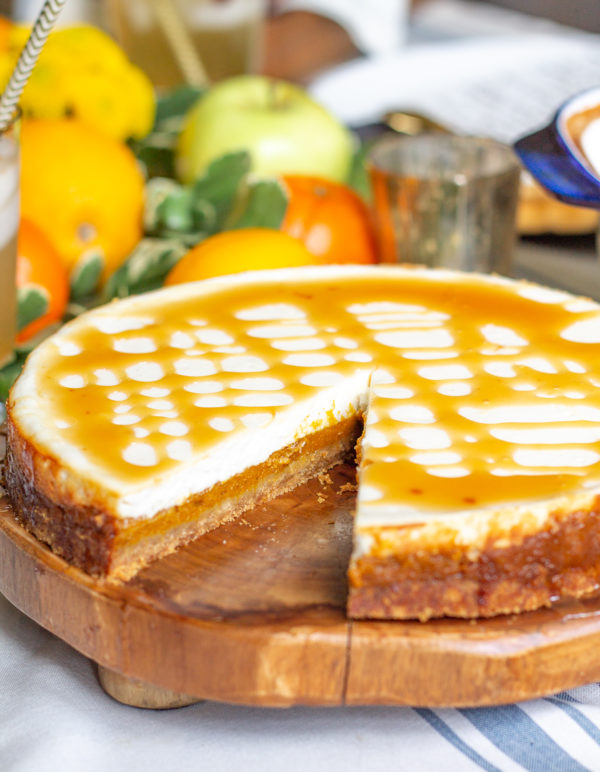 This year I wanted to create a Thanksgiving menu that is a little bit healthier. I wanted to focus on recipes that seemed decadent while including some simple ingredient switches to make things a little lighter on the calories. This Pumpkin Cheesecake is a perfect example. It is made with reduced fat cream cheese and a touch of non-fat Greek yogurt. It still has that rich and cheesy cheesecake taste, it just isn’t as dense. 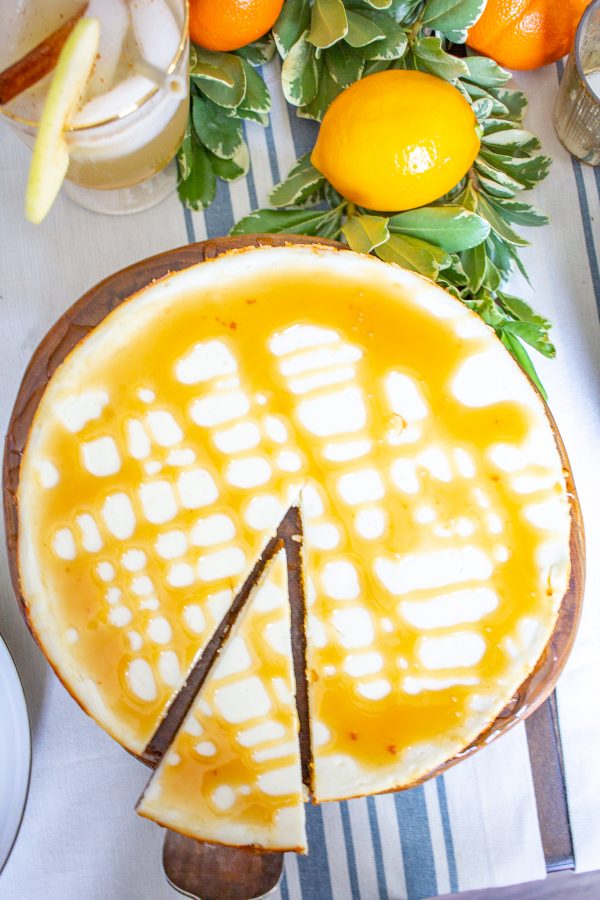 When Charles saw this cheesecake in the fridge and I told him that it was a pumpkin cheesecake he thought that it was a good time to inform me that he doesn’t like pumpkin. I had not picked up on this in the past 10 years, and I felt bad until he completely changed his mind. After dinner Charles grabbed a lone piece of cheesecake that was sitting on the counter and he ate it, and proclaimed that he really liked it! So apparently this cheesecake can win over even people who claim that they don’t love pumpkin. 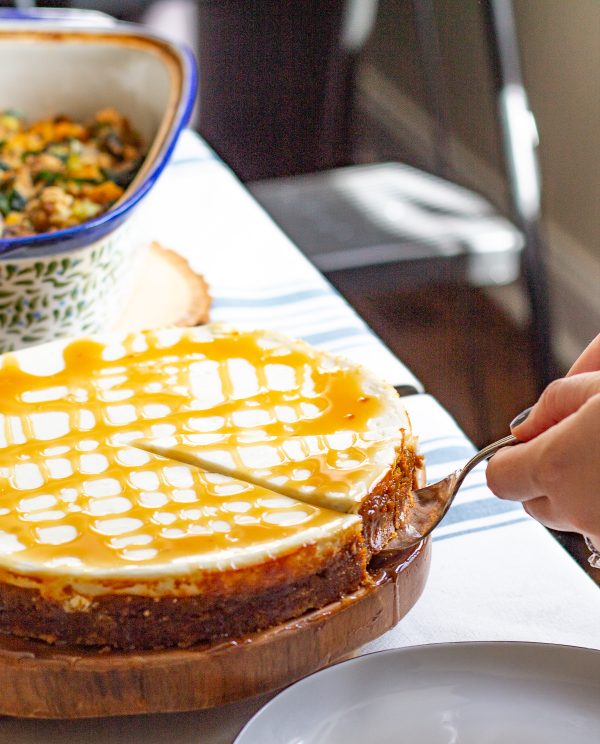 In the past I prepared this recipe as bars made in an 8 inch square pan. This was the first time that I used the recipe to make a cheesecake. It was a little shorter than I expected – you could certainly opt to increase the amount of pumpkin and cheesecake fillings to fill up your spring form pan. I like the smaller serving size since it gives you the opportunity to also try a slice of apple pie! As my Dad calls it, the “side by side comparison”. 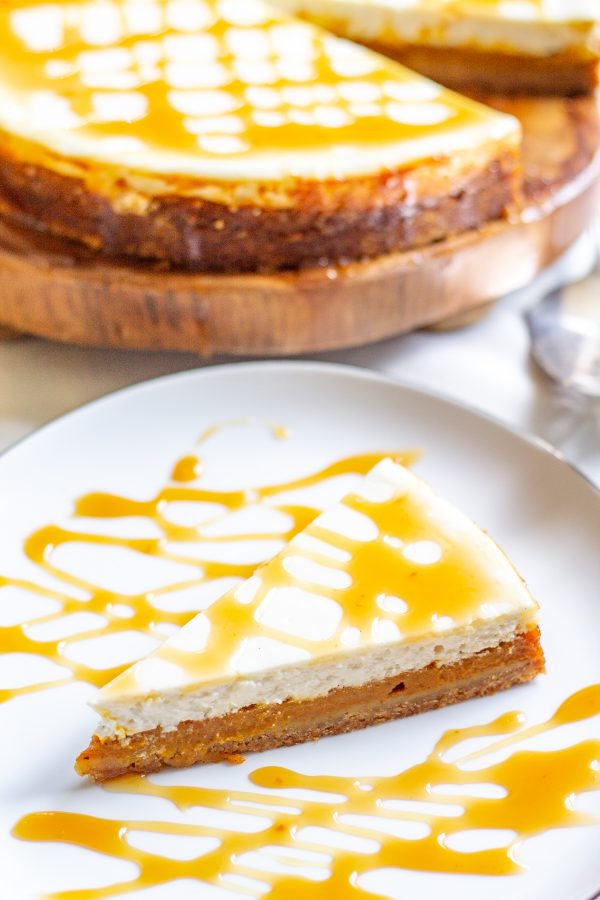 If you do not own a spring form pan, you can make this recipe in a parchment lined baking pan instead. Just make use you line the pan with parchment paper so that you can remove the bars from the pan to slice them up!

I chose to garnish my pumpkin cheesecake with a drizzle of caramel, but you could dust it with cinnamon instead.

Heat your oven to 350 degrees. Melt the butter in a small bowl in the microwave. Stir in the Graham Cracker Crumbs and 1 tablespoon sugar, and then press the mixture into the spring form pan. Place in the oven and bake for 10 minutes. After 10 minutes, remove from the oven and let cool.

While the crust bakes, beat the cream cheese with a mixer on medium speed for 1 minute. Then add the yogurt, egg whites, 1/4 cup sugar, and flour. Beat for another 3 minutes, stopping to wipe down the sides of the bowl. Add the lemon juice, butter, and vanilla. Mix for another minute.

Prepare the pumpkin layer by stirring together the pumpkin pie filling, egg yolks, and remaining sugar. 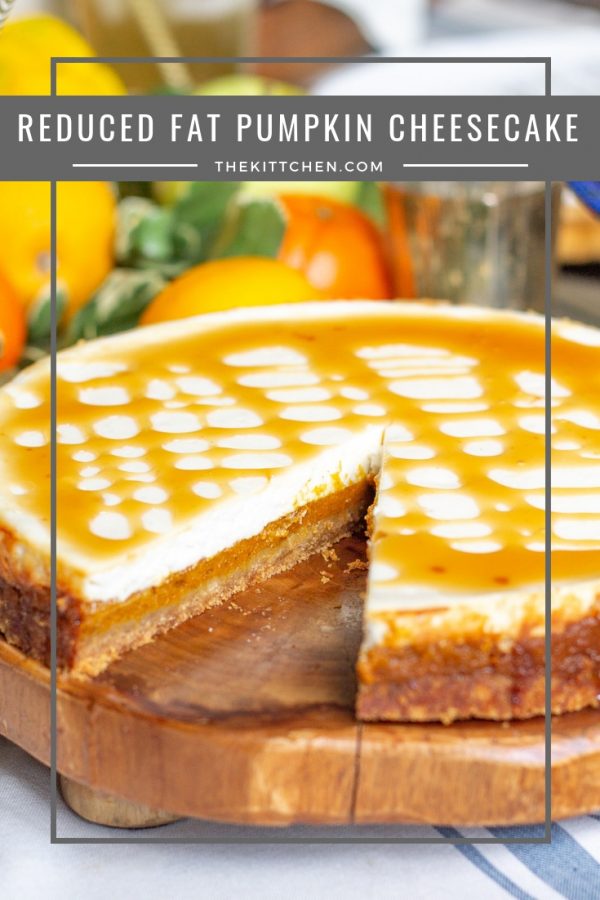