If you only have one day in Paris, this is how I think you should spend it. 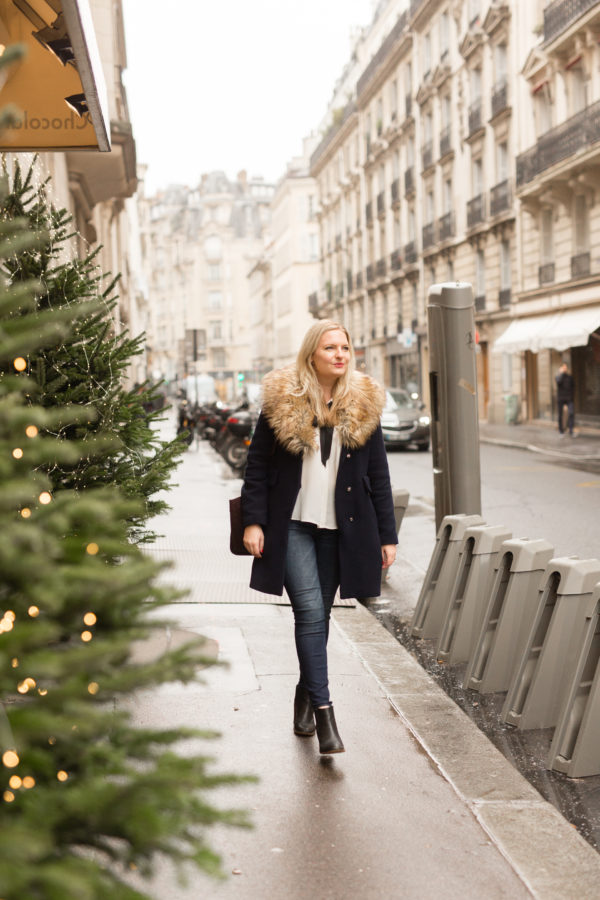 Thanks to the chunnel and high speed trains, Paris is only a 2 hour 15-minute train ride from London. On my last trip to London, I took the train and spent one day in Paris. Yes, Londoners thought that I was insane, apparently hopping on the Eurostar and heading to Paris isn’t something they do on the regular. For me, the trip made perfect sense. Charles was working all day, and he isn’t a fan of Paris and has always refused to go with me.

I had been to Paris before, so I used the day to see my favorite things in the city.

How to Spend One Day in Paris

I started by day by meeting up with Katie Donnelly, an American photographer who lives in Paris. She suggested that we walk over to Jardin du Luxembourg a large public park beside the Luxembourg Palace. In the summer the park is filled with model sailboats floating in the pond and bright beautiful flowers. It wasn’t as colorful or busy in December, but it was gorgeous none the less. 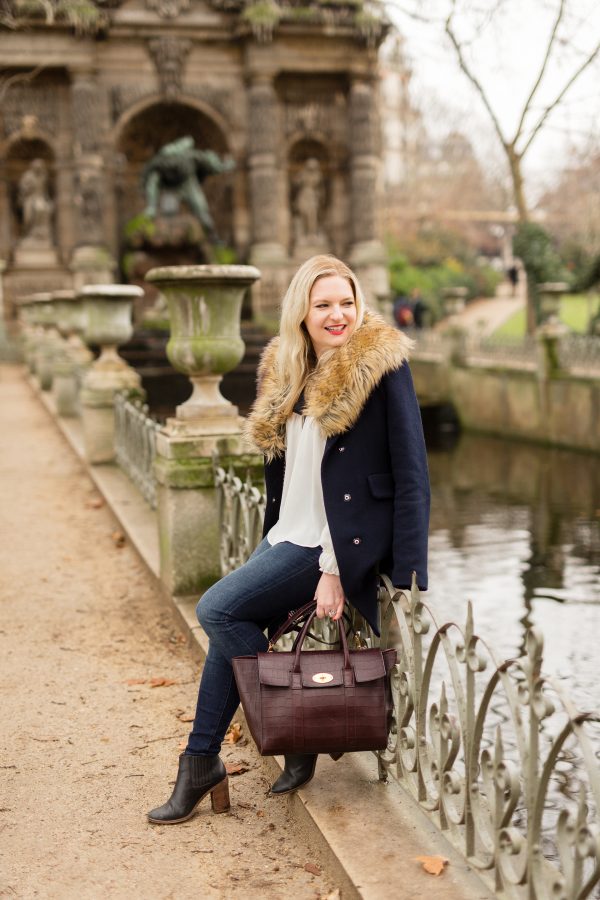 We took photos by the Medici Fountain, which as built in 1630 and restored in 1811 under the command of Napoleon. Today the fountain is a hangout for ducks. 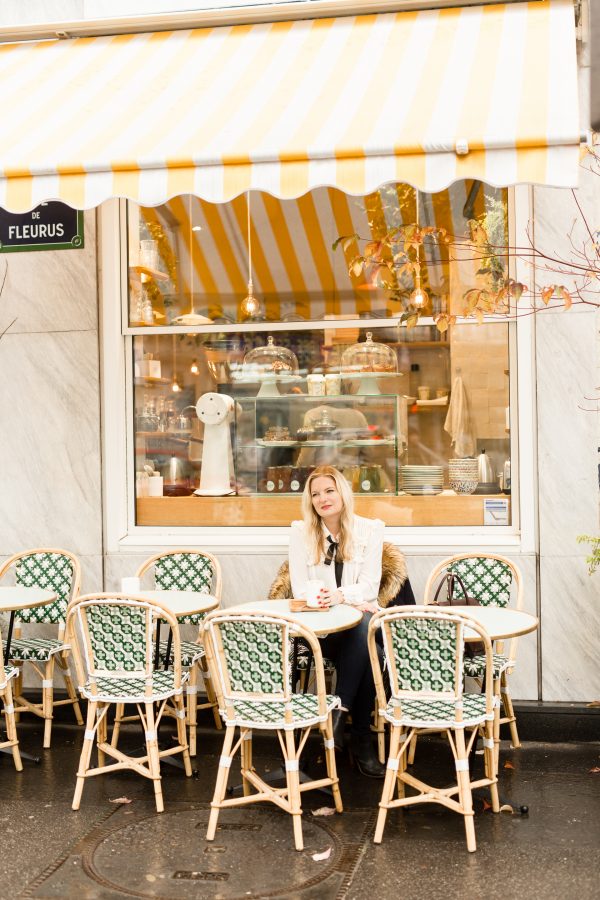 Paris is known for its cafes, and Katie and I couldn’t resist stopping at Judy Cantine Qualitarienne, a bright cafe that felt sunny even though the sky was grey. I love French hot chocolate so I had to order a cup. 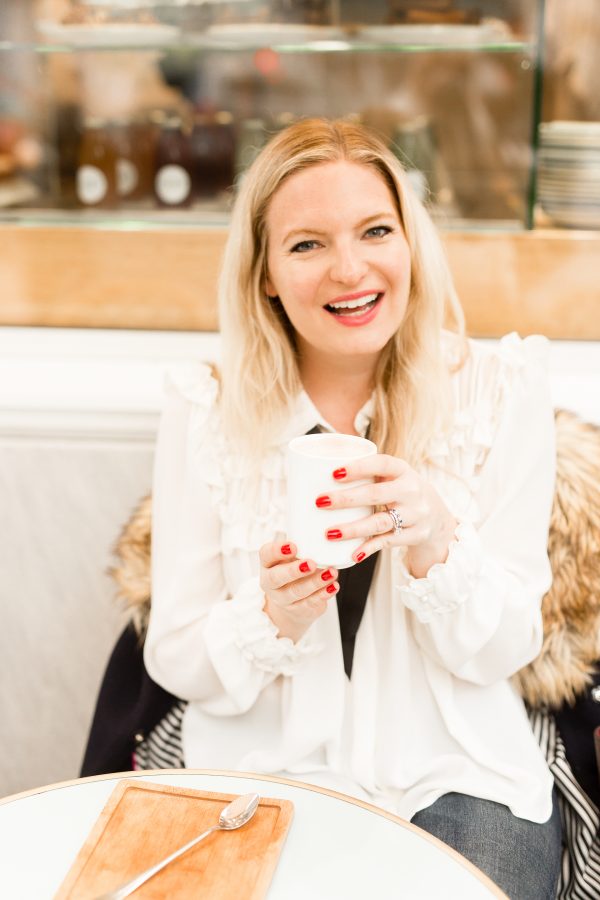 The French have a way of making even foods that I am familiar with taste even more delicious, and I love grabbing a table outside a cafe and people watching. Plus, if you go to Paris for a day, you will probably need to eat, so visit a cafe! 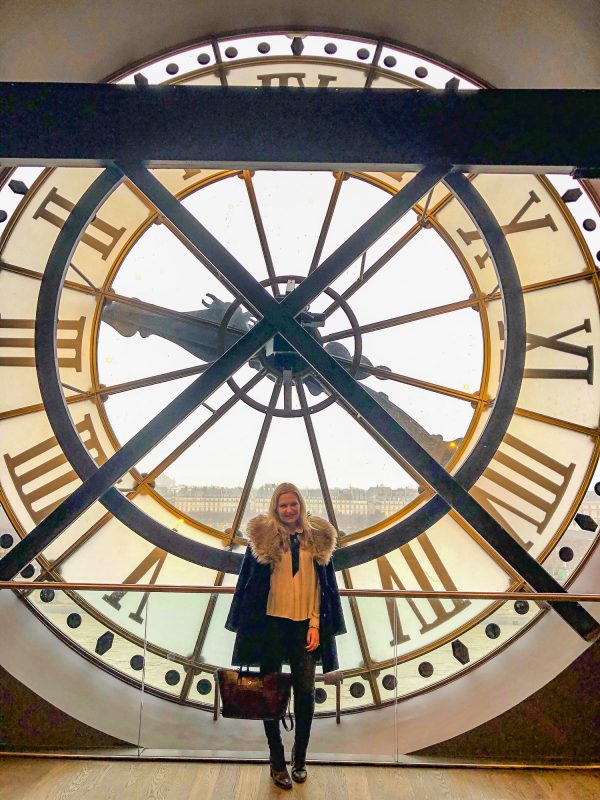 After I said goodbye to Katie, I headed to Musee d’Orsay. I pre-booked my ticket and got to bypass the line, which is something I highly recommend doing. Musee d’Orsay is one of my favorite museums (and as someone who majored in Art History, I have been to a lot of art museums). 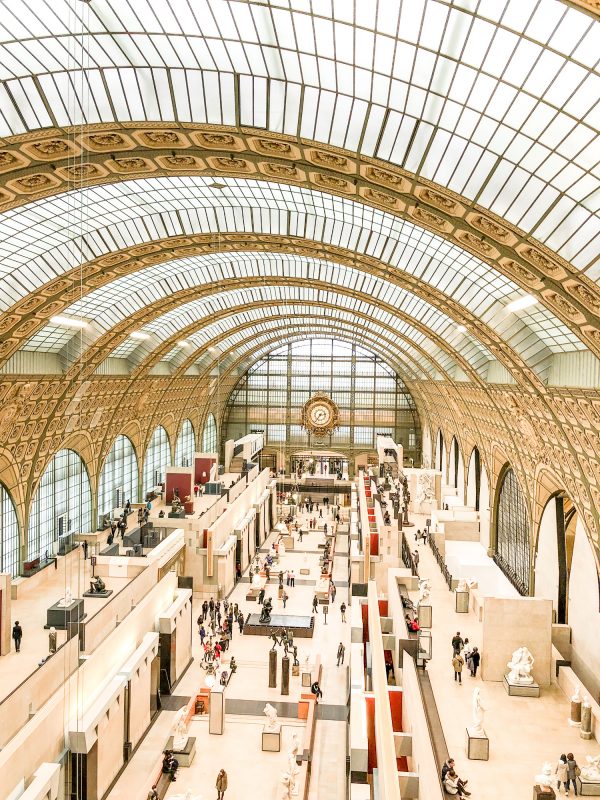 The museum is housed in a former train station and is famous for its collection of Impressionist and Post-Impressionist works. This is where you will find works by Degas, Monet, Manet, Van Gogh, and Gaughan. You could spend a half way working your way through the whole museum, or you could see the highlights in just a couple of hours. 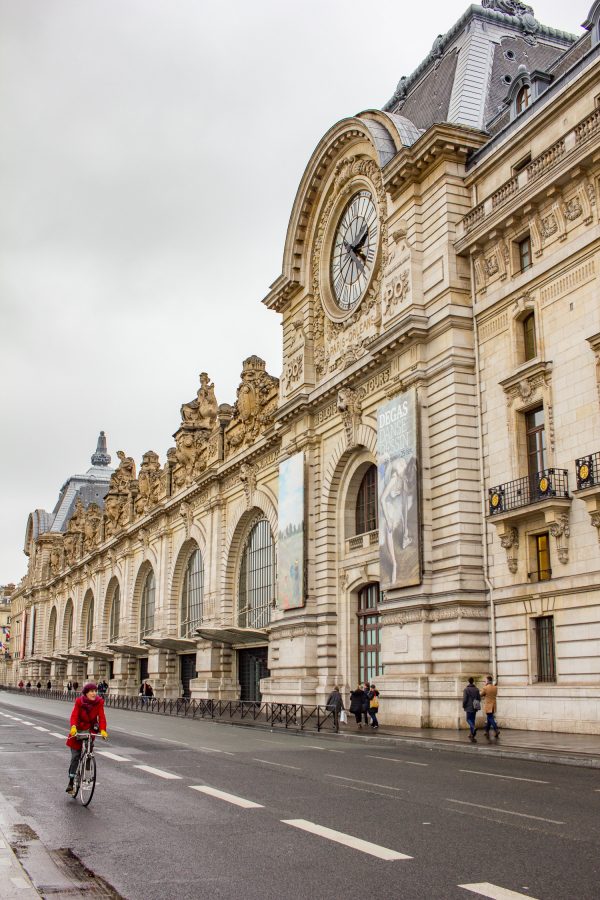 The museum has a gallery dedicated to Van Gogh, and it is home to one of the largest collections of Van Gogh paintings in the world. Other highlights include Manet’s Olympia, Manet’s Luncheon on the Grass, Seurat’s The Circus, Renoir’s Dance at Le Moulin de la Galette, and Monet’s The Rue Montorgueil in Paris. Celebration of June 30, 1878. If you are a fan of Impressionism and Post-Impressionism, skip the Louvre and come to Musee d’Orsay instead.

Musee d’Orsay is just across the Seine from the Tuileries Gardens, a massive public garden in the center of Paris. It stretches along the Seine from the Louvre to the Orangerie Museum. Since the garden is so centrally located (and between so many amazing museums) it is easy to sneak in a walk through this park. 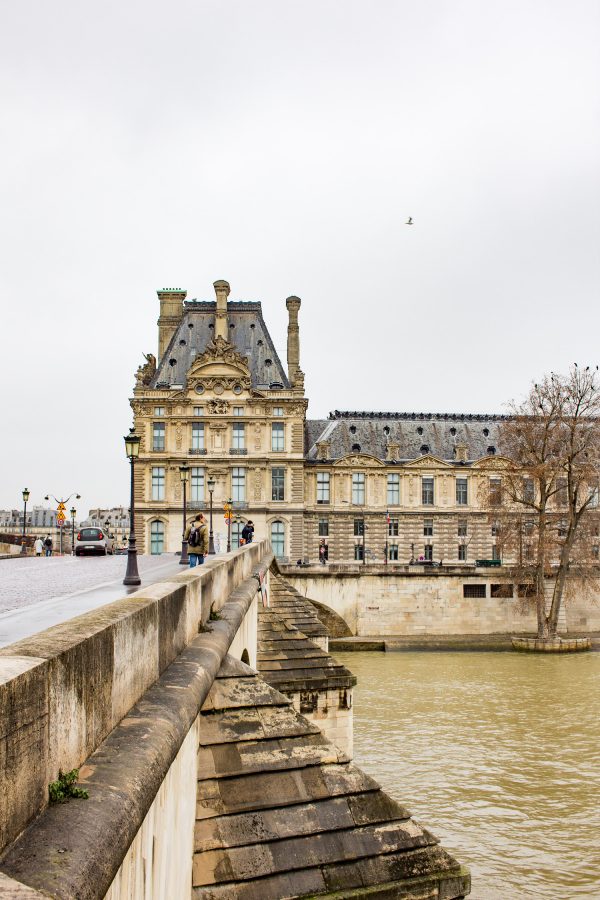 One of my favorite things to do in Paris is to just walk around. The city is filled with the most amazing architecture, and it is beautiful even on a drizzly day. When you just wander around in Paris you will find the most incredible things. 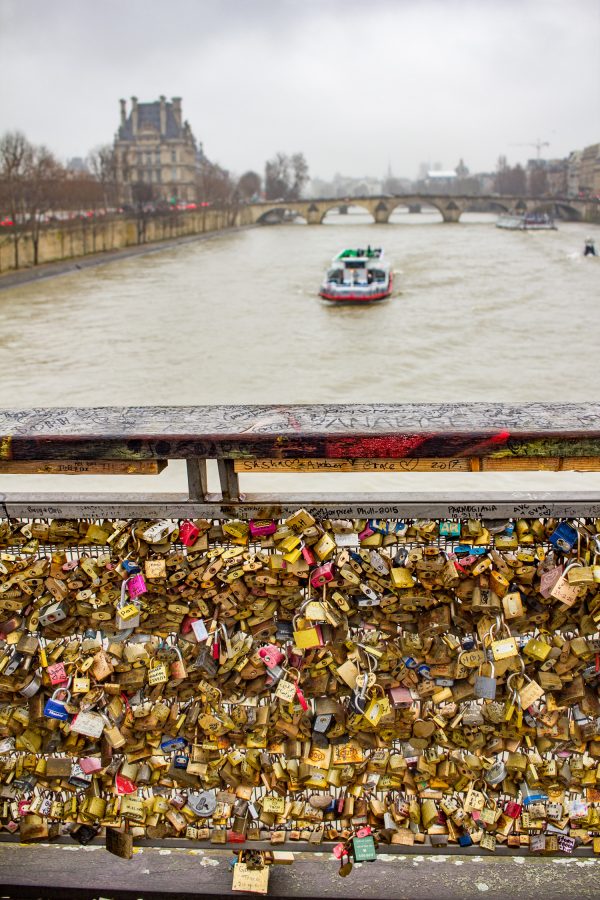 I came across Passerelle Leopold-Sedar-Senghor, a bridge beside the Musee d’Orsay that is lined with love locks. The original “love lock bridge” was Pont des Arts, but the locks were removed and the bridge was updated to prevent tourists from adding love locks after over 700,000 locks added over 45 tons of weight to the bridge. Parisians hoped that the love lock trend would end, but now it has just moved to other bridges in the city. 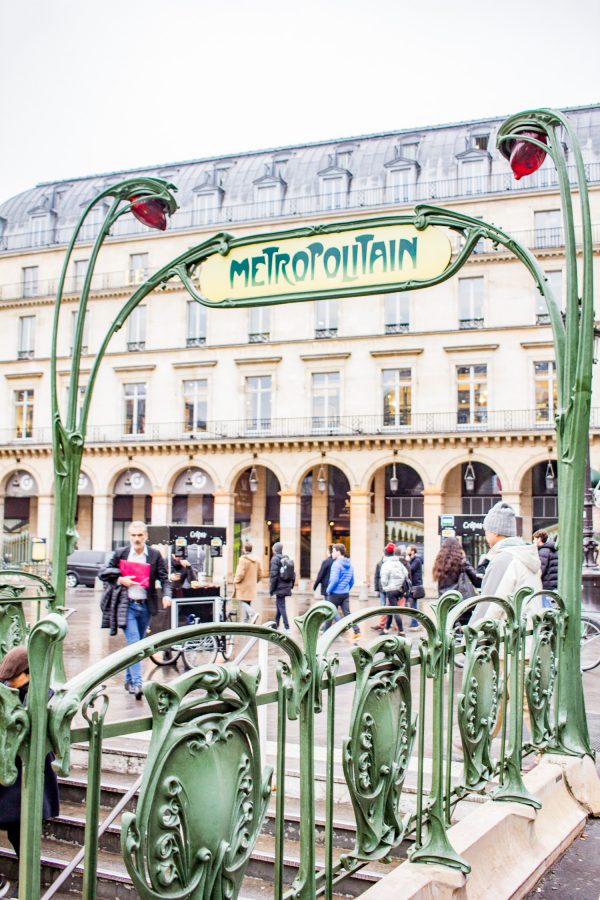 Paris has a handful of iconic Art Nouveau metro stations. This is the Palais-Royal station, which is near the Louvre. Of course Parisians can make even subway stations look nice. 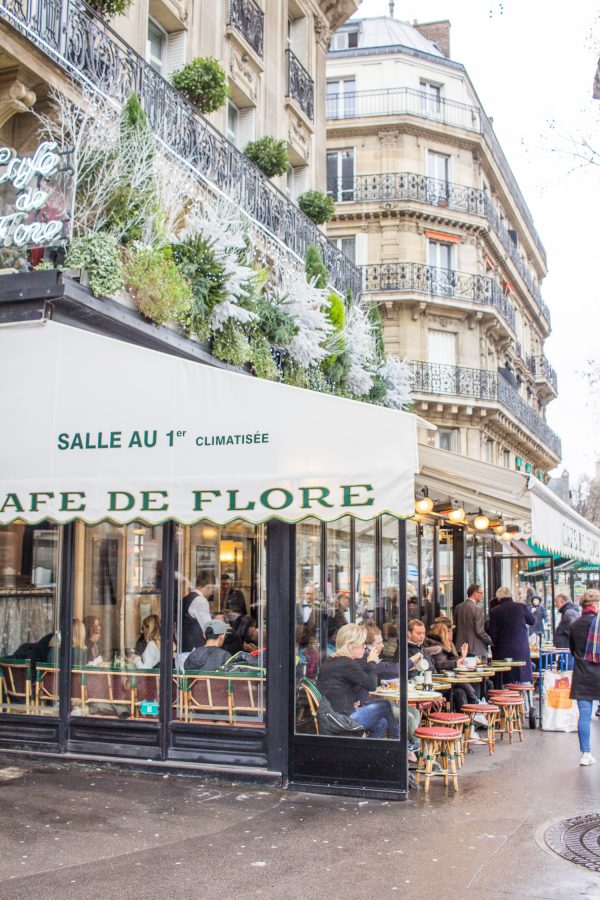 I walked down Boulevard Saint-Germain, which is lined with some of the prettiest cafes in the city. I always think of Gossip Girl when I think of Cafe de Flore, since Blair and Serena mention it several times throughout the television series. 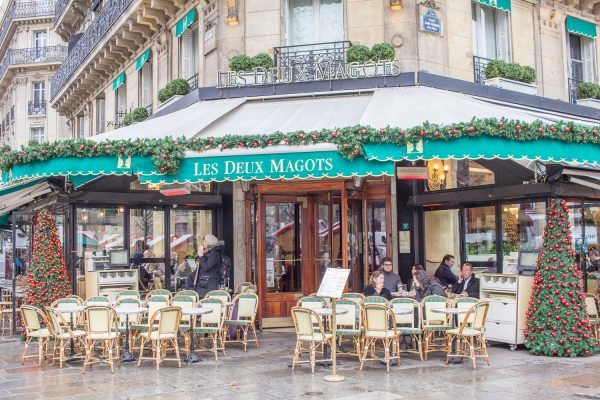 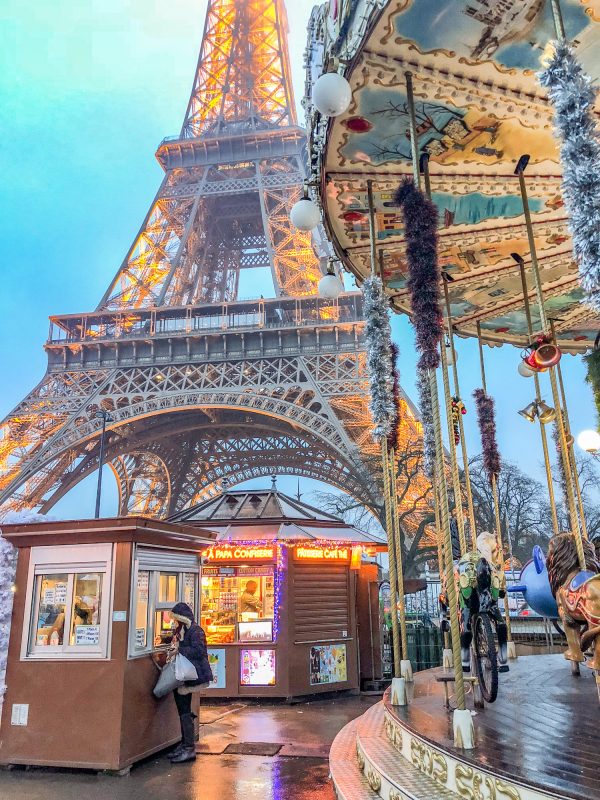 I walked over the to the Eiffel Tower in time for sunset. I had seen it several times before, but I couldn’t resist seeing it again.

I got there just as the sun was setting and was there when they turned the lights on. The lights come on at sunset, and the light show (which make the Eiffel Tower look like it is sparkling) takes place for 5 minutes on the hour for every hour from sunset until 1am. There are viewing platforms not the second floor (about 1/2 up the tower) and on the top of the tower, and you can pre-purchase tickets online. There are three restaurants, plus a Macaroon Bar and a Champagne Bar within the tower too.

Obviously, one day isn’t much time to spend in Paris. If I had more time I would have gone to The Louvre, Notre-Dame Cathedral, Montemarte, Centre Pompidou (which happens to have amazing views of the city), the Orangerie Museum, Versailles Palace, and the Champs-Élysées. 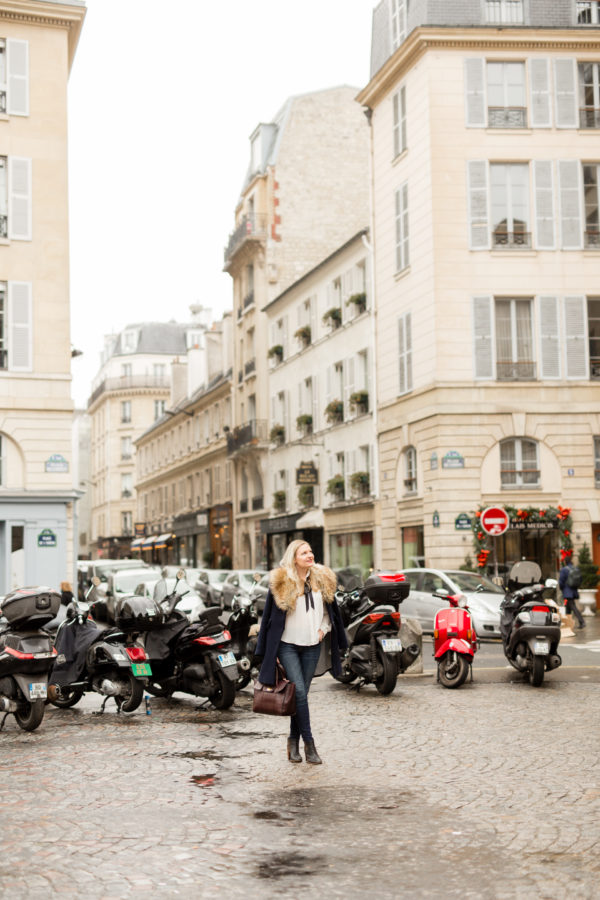 Huge thanks to Katie for meeting up with me last minute to take photos! If you need a photographer in Paris, I can’t recommend Katie enough, I was blown away by her work and we had so much fun together. I am hoping to see her again in 2018… because Paris is always a good idea.

Want to save How to Spend One Day in Paris for later? Here is an image for you to pin: 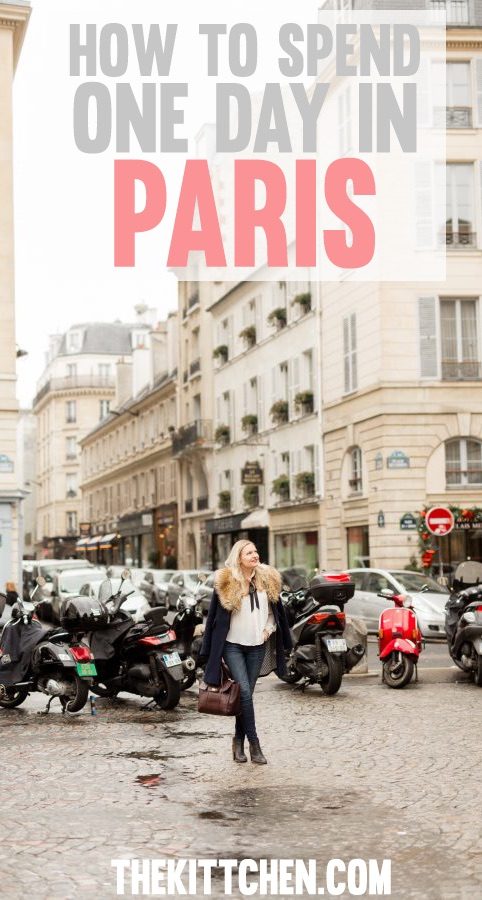 a day in Paris sounds great!