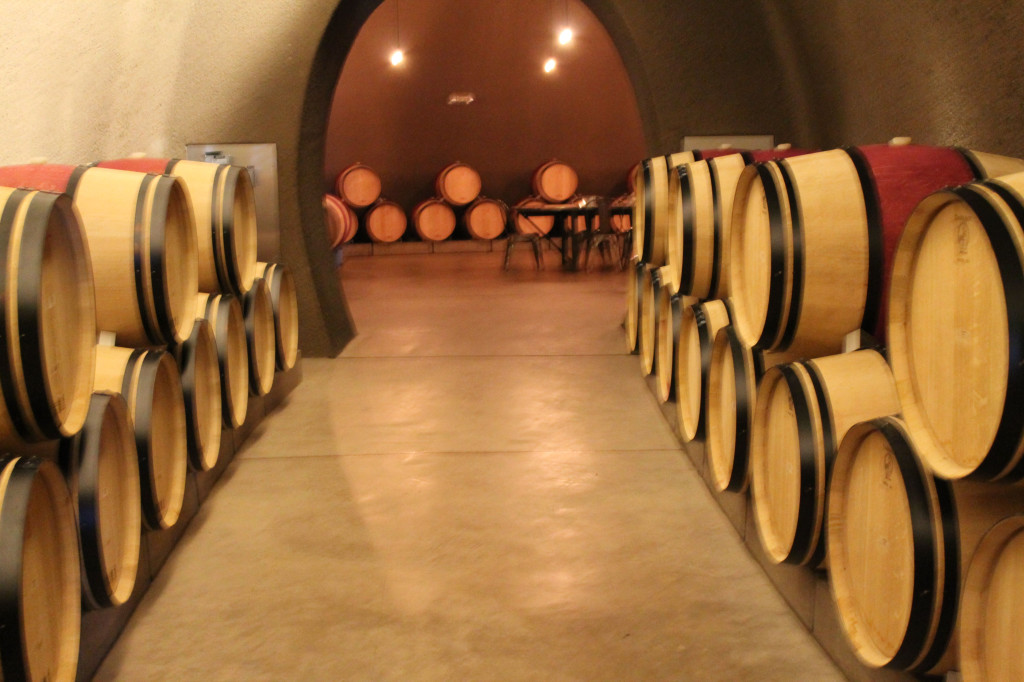 Charles and I had the best time celebrating my 30th birthday in Napa. I already wrote about all of the incredible food we enjoyed in Napa, and now it is time to talk about wine.

Before you go to Napa I recommend that you watch Bottle Shock and Sideways. Bottle Shock is based on the 1976 Judgment of Paris taste test, and it gives historical background on how Napa became such a famous wine region. The Judgment of Paris was mentioned by several tour guides, and it was nice to know what they were talking about. Bottle Shock was an independent film from 2008 with a great cast: Bill Pullman, Chris Pine and Alan Rickman – think about it – that is the President of the United States, Captain Kirk, and Professor Snape in a movie together. Sideways is movie about a crazy pair of friends spending the weekend in Napa. One of the characters trashed talked Merlot so much in the movie that sales dropped dramatically for years. So before you head out to Napa, grab a bottle of wine and have a movie night. 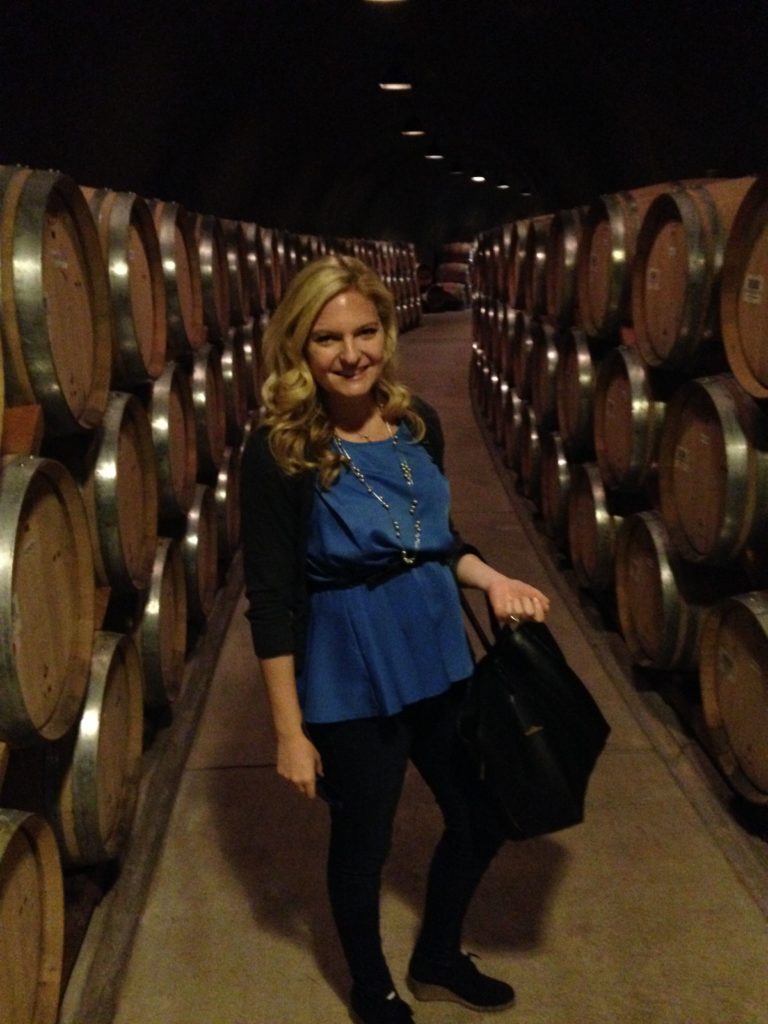 The first vineyard we visited was Stag’s Leap. The Stag’s Leap cabernet sauvignon won the 1973 Judgement of Paris, which made it a fitting place to begin our wine tours. We had a private tour of the winery and followed by a private tasting. Our tour started at 10am, and the tour guide gave us what he jokingly called a “breakfast wine”. Charles has clung to this term and uses it regularly. Charles and I rarely drink white wine, but the breakfast wine, aka the Sauvignon Blanc was so good that we left with 2 bottles. Our favorite wine was the Cask 23. It is a bit pricy but we took a bottle home, and will be saving it for a very special occasion. Stag’s Leap was my husband’s favorite vineyard. 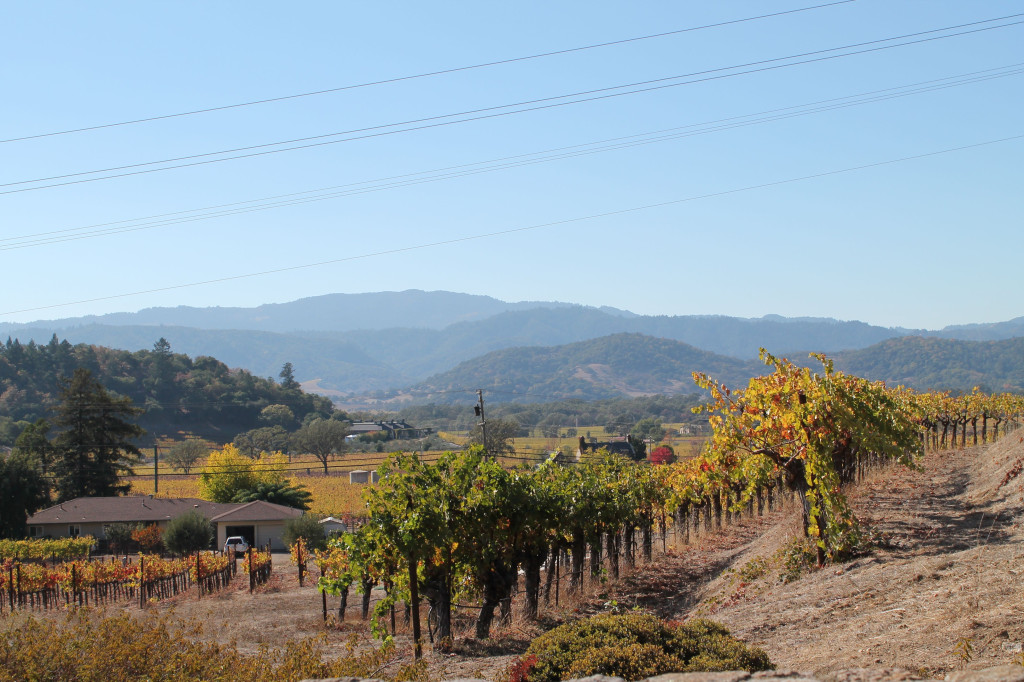 The next vineyard we visited was Robert Sinskey Vineyard. This tour was by far the best. Robert Sinskey’s daughter in law is a chef, and the tour was much more food focused than the others. The tour began with one of the chefs walking us through their garden. The vineyard is biodynamic, and they turn the grape skins into mulch for the next year. The garden had a variety of foods including pumpkins, a bay leaf tree (did you know they grow on trees?), eggplants, and figs. I loved listening to the chef talk about how they use the garden to create foods to pair with the wine. 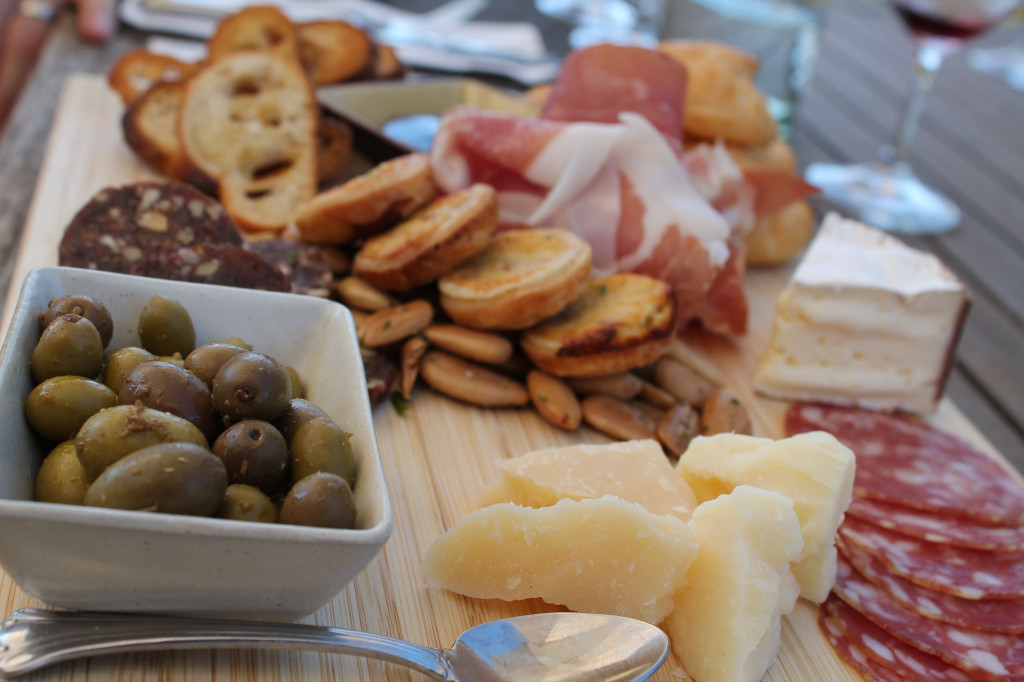 Perhaps the best part of the tour was the tasting. Unlike the other tastings, we were given a generous amount of incredible snacks. This might have been one of the best snacks of my life. The sage toasted almonds, fig bar, and the caramelized onion tartlets were delightful, and the cheeses were very well chosen. 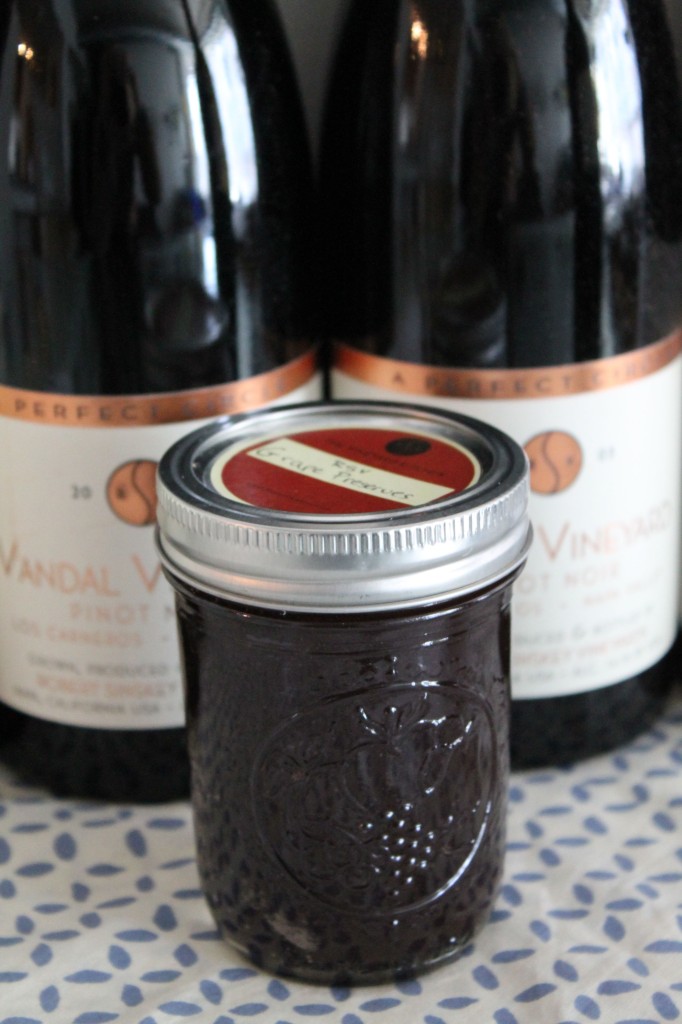 The standout item was the RSV Grape Preserves which was made with leftover grapes from the harvest. It pairs perfectly with cheese, and I have been using it to make grilled cheese sandwiches.

If you love food as much as you love wine, be sure to stop by Robert Sinskey Vineyard if you are in Napa. I know that going back will be my number one priority when I go back to Napa. 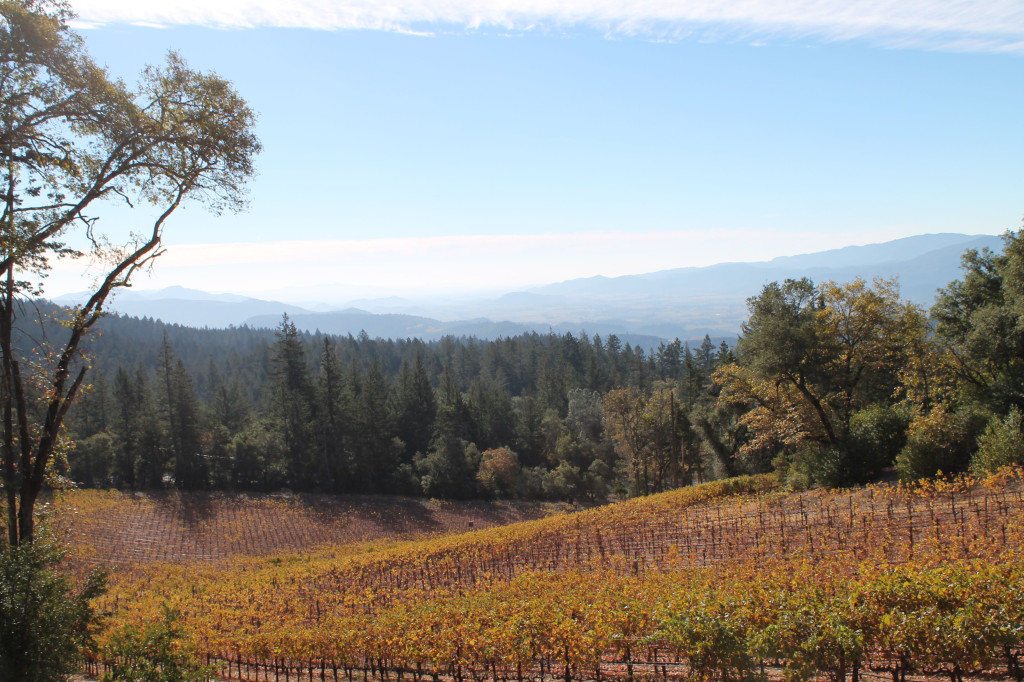 The next day we started things off with a trip to Cade, which sits on a stunning mountainside. They also paired their tastings with cheese and meat, which was a nice mid-morning snack. The drive from Napa to the vineyard was gorgeous, and the vineyard was the prettiest. 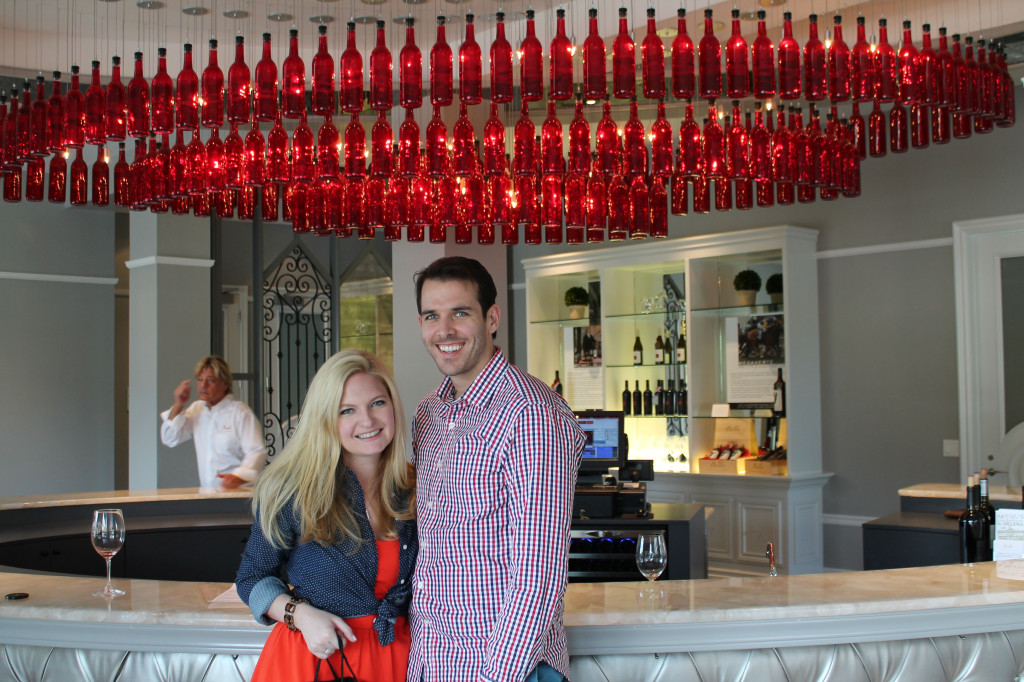 We had extra time between tours, so we stopped into Bello Family Vineyards for a quick tasting. We met the owner, Michael Bello. He overheard that we live in Chicago and then called his friend Chef Fabio Viviani and handed the phone to me. Our favorite wine was the Megahertz which is named after Michael Bello’s racehorse. 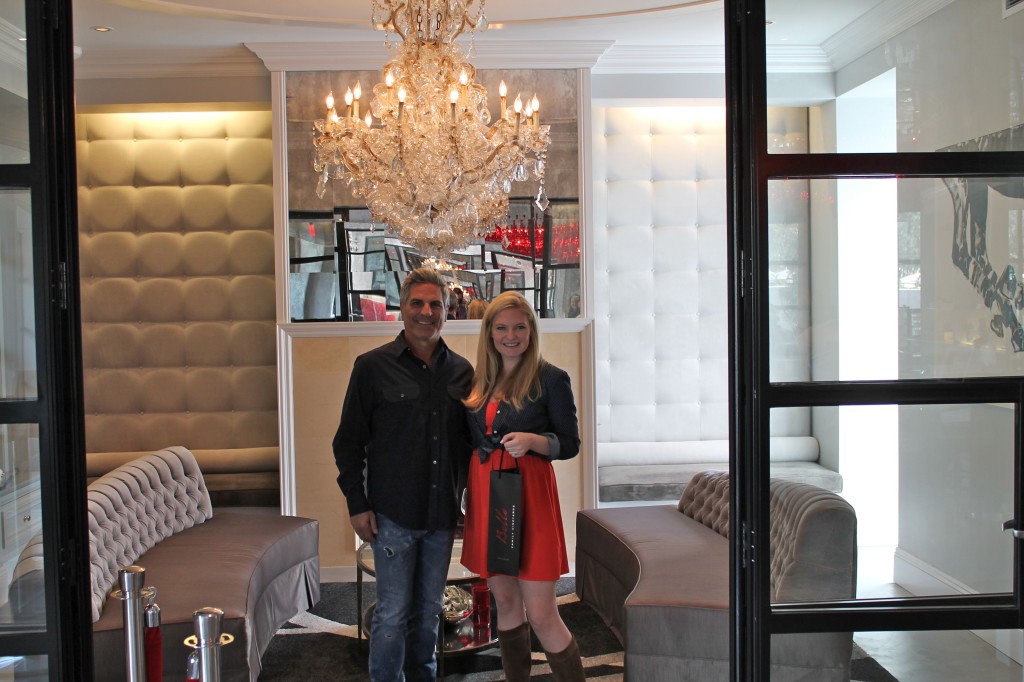 The last winery we visited was Merryvale, which is was the first winery built in Napa after Prohibition was repealed. For this reason this tour included more information on the history of the region. 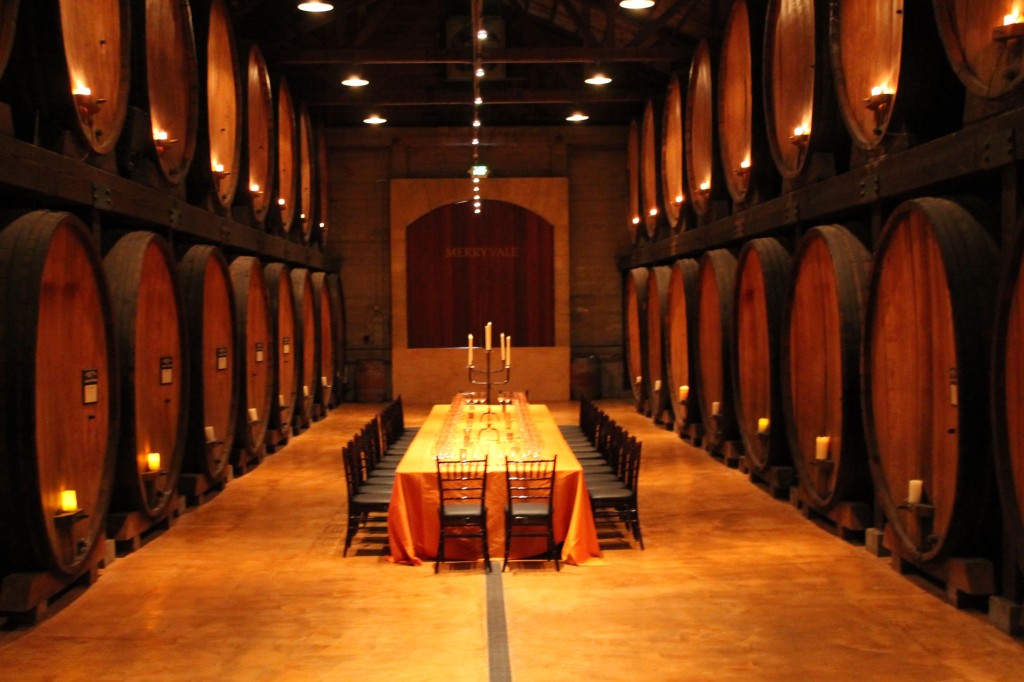 I want to let everyone know that we did hire a driver so we could enjoy the wine and not worry about transportation. I strongly recommend that you do this. We hired a wonderful and fun driver from Bee Driven. Our driver met us at our hotel and drove our rental car for us. It was also really great to get advice from a local on what to do with free time and which restaurants to try.

Charles and I assembled our own case of wine during our trip. The folks at Stag’s Leap gave us a box to hold 12 bottles of wine. We filled the case as we toured the vineyards, and then at the end of the trip we sealed it up and checked it on the plane. The San Francisco airport must be very familiar with people doing this since they had special wine stickers for our package. This was less expensive than shipping the wine. There are some states that you cannot ship wine into, so check before your trip.

This post is part of a campaign to get my parents to retire to Napa.