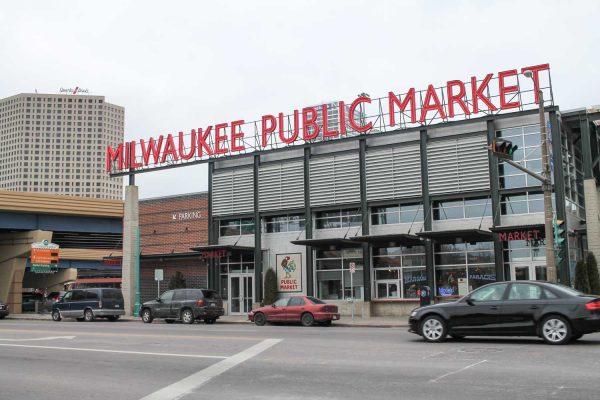 Chicago winters are long. We get stir crazy, and finding new and exciting things to do can be a challenge. When megabus.com asked me if I wanted to partner on a blog post and travel to one of their 100+ destinations, I didn’t have to think twice. A weekend away with Charles was just what I needed.

Since we were just going to take a quick weekend getaway, we chose Milwaukee as our destination. I had never been, it’s under 2 hours from Chicago, and I can easily get on board with a place known for cheese and beer! I feel like recent weekends in Chicago have been spent searching for something new and fun to do, and then us resorting to getting takeout and watching a movie on the couch. It was so much fun to explore a whole new city! 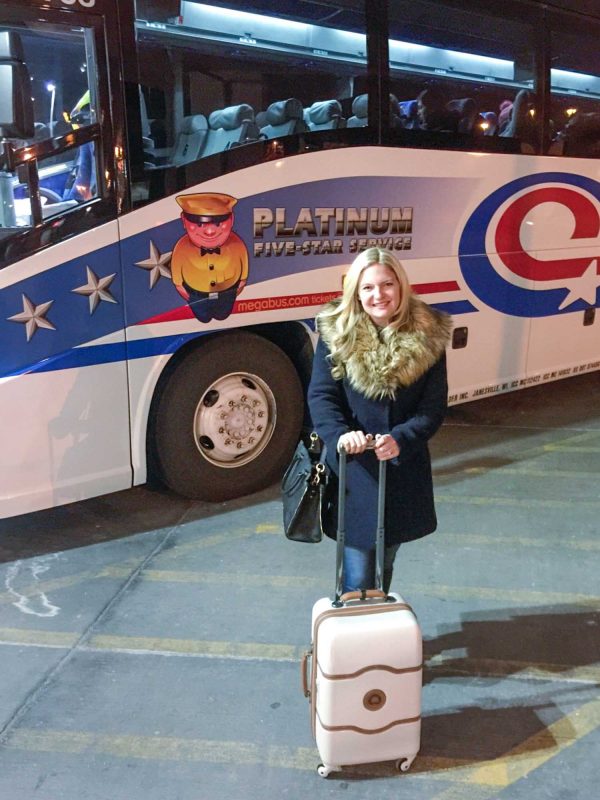 You might not know this about me, but I don’t like to drive. I haven’t driven in over 5 years! I would much rather let someone else do the driving. We don’t even have a car. On a recent Saturday, Charles and I hopped on a noon megabus headed to Milwaukee. We settled in, plugged our phones and iPads into the outlets, connected to the WiFi, and spent the ride relaxing. By the time I finished one episode of Miss Fisher’s Murder Mysteries we were nearly there. The experience was so much easier and far less expensive than renting a car. The bus tickets were only $10. 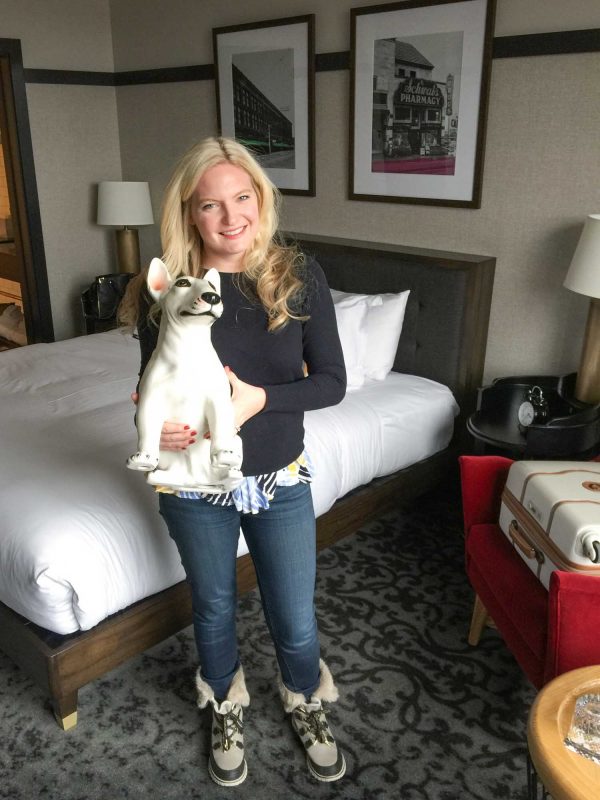 Our first order of business was checking into the new Kimpton Journeyman Hotel, a boutique style hotel in the Historic Third Ward. The hotel is perfectly located; we could explore so much of the city on foot. My favorite part of our room was the dog statue because I have been begging Charles to let me get a dog for years – he said that the statue is the closest thing to a dog that I am getting. The best thing about the hotel might have been the social hour in the lobby, which involved complimentary drinks in the chic hotel lobby for an hour each night. 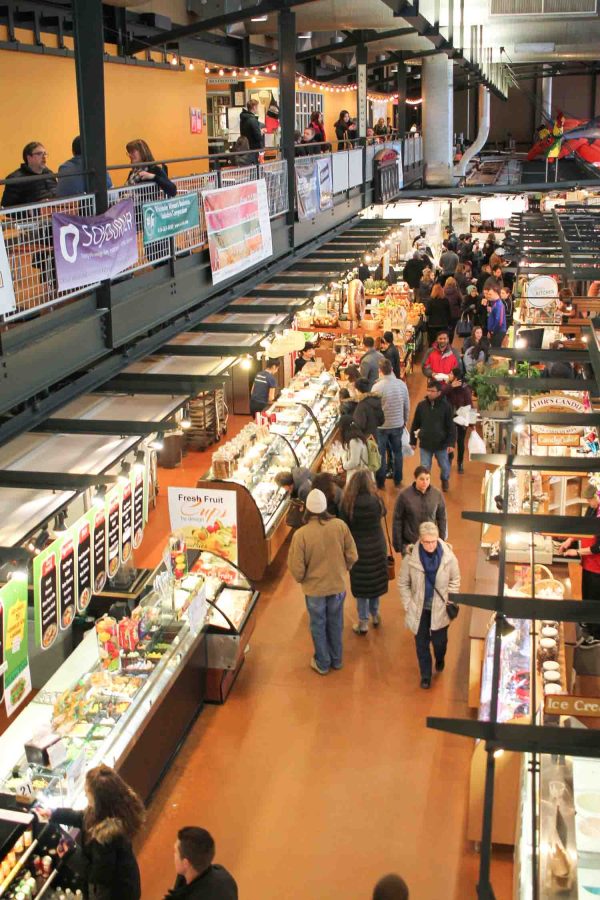 After checking in at the hotel, we set off on foot to visit the Milwaukee Public Market, a destination that several friends recommended. It was a bit crowded since it was the weekend, but we liked checking out all the different stalls selling food. 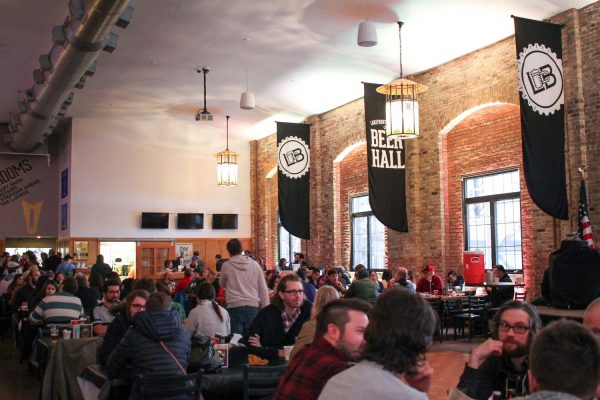 I had two things on my mind upon arriving in Milwaukee: beer and cheese. To satisfy these cravings we headed to the Lakefront Brewery. Lakefront Brewery was packed! The full tour was totally sold out- but we got to do the 30-minute mini tour instead. 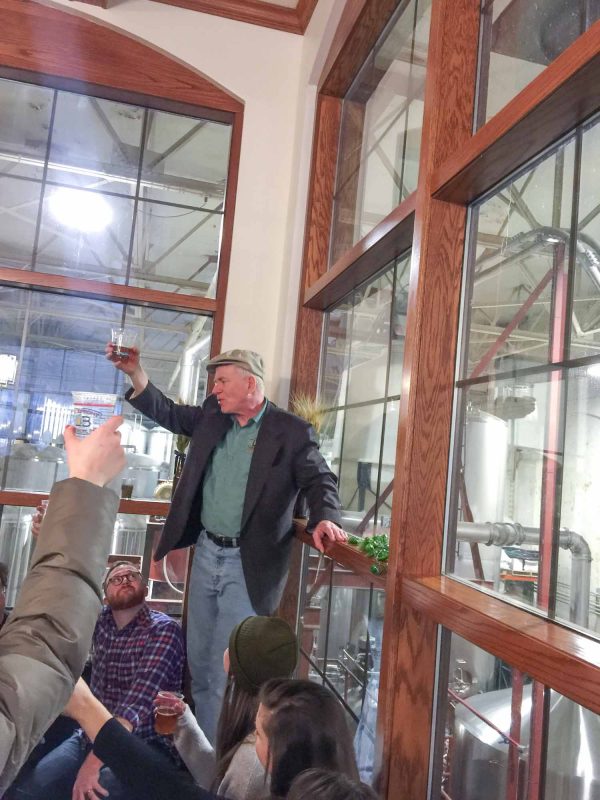 Our tour guide, Norman, is a local actor and a compelling storyteller. Lakefront is the second largest brewery in the city and the mini tour explained the history of the brewery and the process of how beer is made. We also got 4 tastings of beer with the $8 tour ticket. 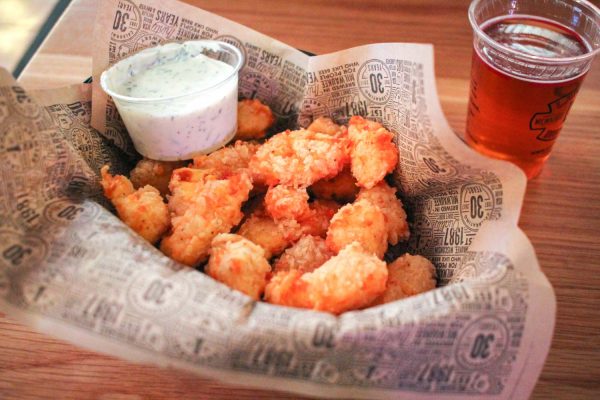 After the tour, we grabbed a table and ordered the famous cheese curds which have been listed among the best the Milwaukee. The cheese curds were battered with hearty breadcrumbs and served with a thick tangy creamy ranch dressing. They were exceptional. 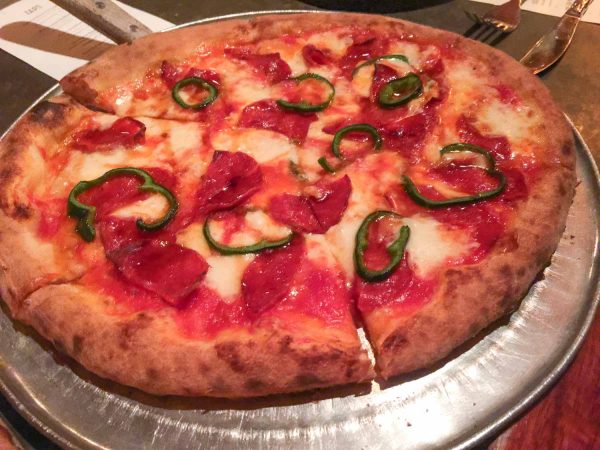 Several friends gave me a list of restaurants to check out, and Charles was in the mood for pizza so we headed to Wolf Peach, a restaurant within walking distance from Lakefront Brewery. We loved it. We grabbed spots at the bar and the bartenders recommended local beers to pair with our pizzas.

The next day we ate our way through Milwaukee stopping at Benelux Cafe, the old PBR factory, Milwaukee Brat House, and Odd Duck. We checked out the boutiques in the Historic Third Ward and continued our hunt for the best cheese curds. Next week I will spill all those details. 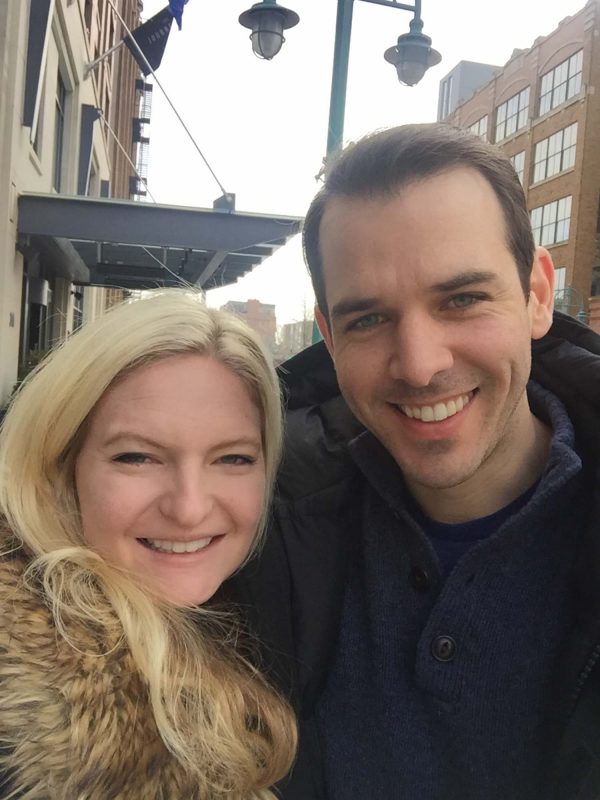 Chicagoans, if you haven’t been to Milwaukee yet – what are you waiting for?! For $10 megabus.com will take you to a whole new city to explore. It’s a great deal and exciting upgrade to hibernating at home during the weekend.

Have you ever taken a Megabus? Where did you go? I want to hear all about it! In the spirit of Valentine’s Day, megabus.com is holding the Marry Me on a megabus contest! You can enter to win a free wedding on a megabus, honeymoon transportation in the form of 2 roundtrip megabus tickets, and $2,500 to spend celebrating. You can enter to win the contest here – hurry up the contest closes on February 21st.

This is a sponsored conversation written by me on behalf of megabus.com. The opinions and text are all mine.