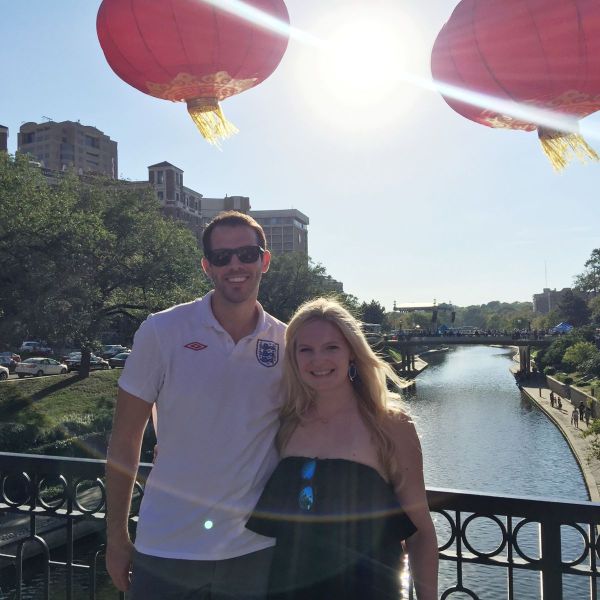 On day two of our trip to Kansas City our number one mission was to eat bbq. Kansas City is the bbq capital of the world, with over 100 restaurants devoted to the cuisine. Due to its central location within the US, KC has a mix of bbq styles, and some local specialities. Then, after filling up on bbq, we spent day three of our trip wandering throughout the Plaza Art Fair. I’ll tell you about both today, starting with the bbq. 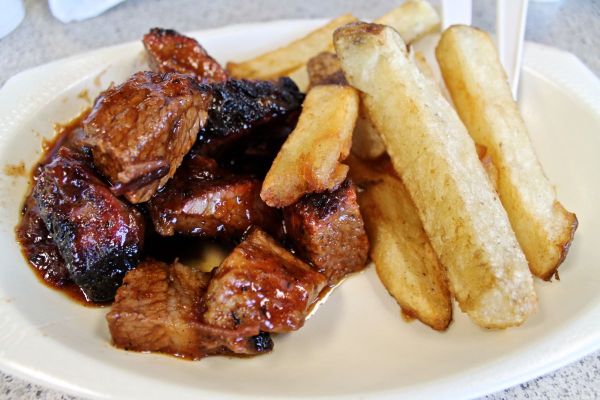 We began our mission at LC’s BBQ, a place known for burnt ends and fries. Burnt ends are a KC specialty and an item that can be found on the menu at any bbq restaurant in Kansas City. These fatty brisket ends are lightly charred, cubed, and served with barbecue sauce. 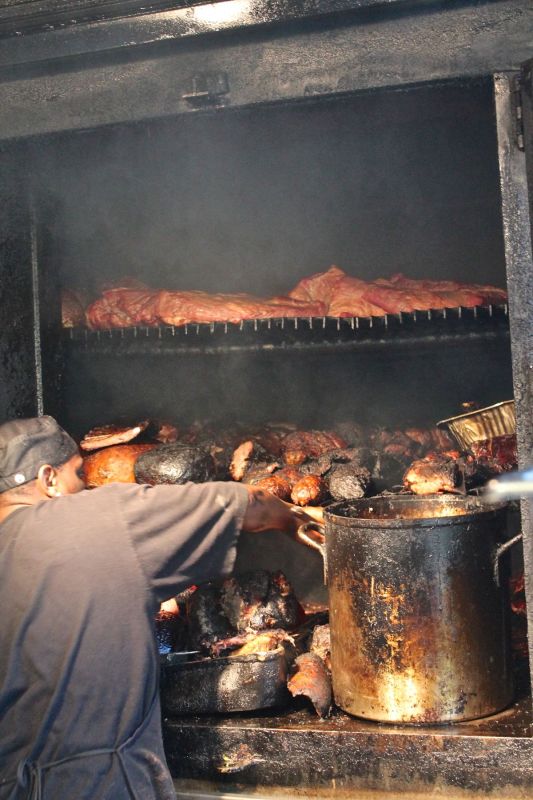 Charles liked the divy atmosphere of LC’s, and that the smoker is on full display so patrons can see the action. While Charles loved the burnt ends at Char Bar, he thought that LC’s were a touch better. I loved the extra thick fries that were crunchy outside and soft inside. 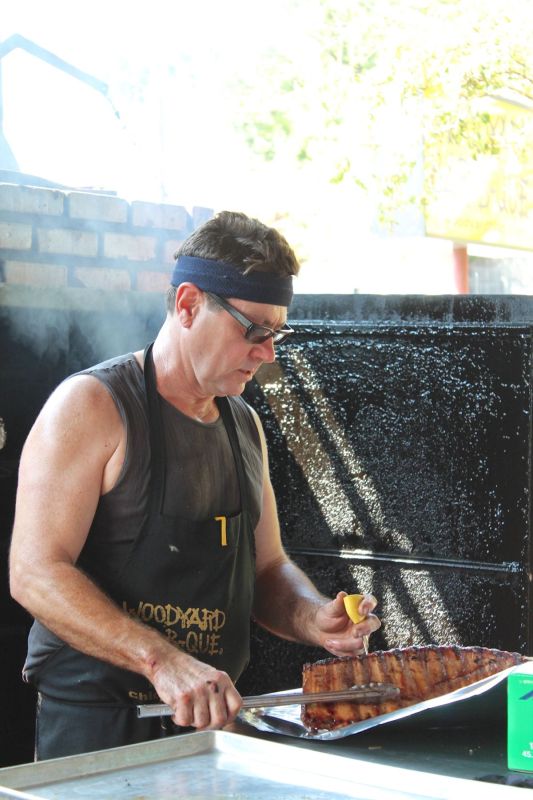 Next up was Woodyard Bar-B-Que, a barbecue place with an interesting backstory. Woodyard was originally just a place that sold wood and served free barbecue from a smoker to customers. Today, Woodyard is a full fledged restaurant, but they still sell wood to many other Kansas City restaurants. Woodyard has a large outdoor smoker that they keep running almost constantly. 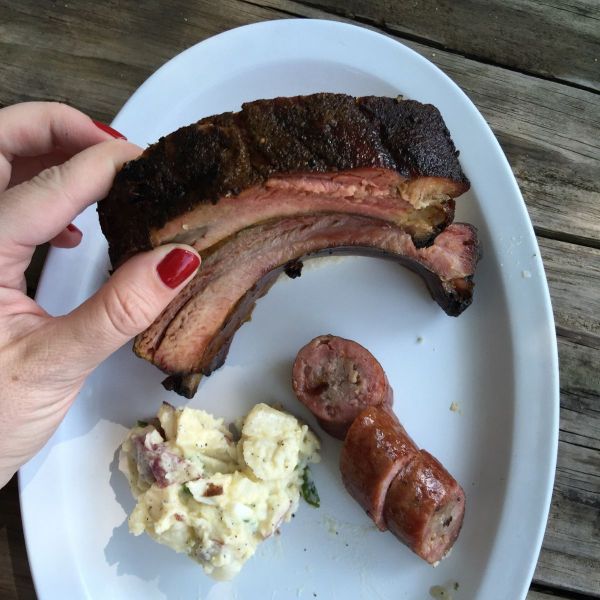 We tried the ribs, bacon sausage, and potato salad. The ribs were fall off the bone tender, and I thought Woodyard’s sweet and slightly spicy barbecue sauce was the best. Woodyard is also famous for their wings, which usually sell out by 2pm. 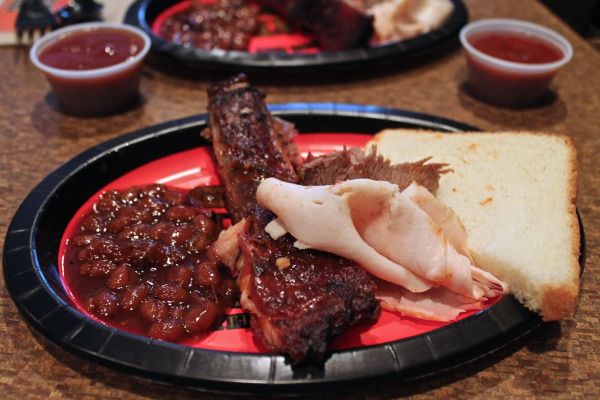 Our last stop was Gates BBQ, a restaurant that several people mentioned when they heard I was going to KC. Gates has six locations throughout Kansas City, and is a local favorite. I was getting full by the time we made it to Gates but I tried the ribs, baked beans, and brisket. These were Charles’s favorite ribs, and I loved the baked beans. We toured these bbq joints through KC Barbecue Tours, which offers a variety of food centric tours. 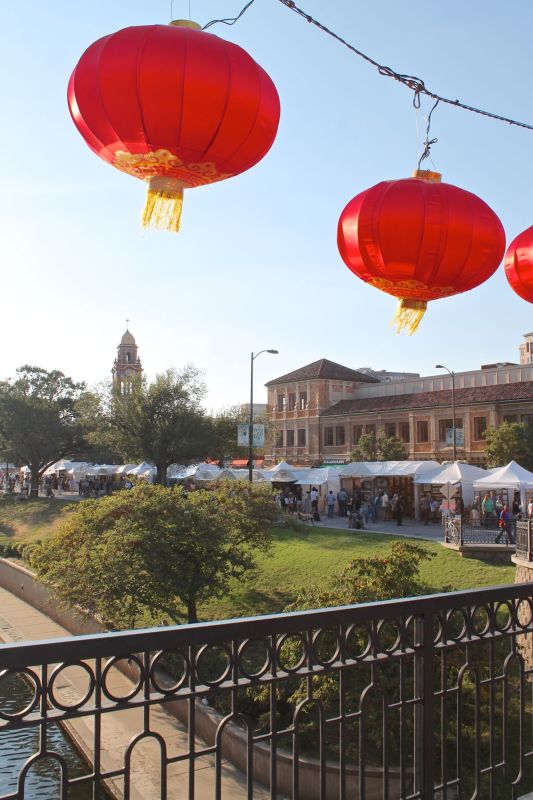 We were stuffed – post Thanksgiving dinner level full. We decided that we needed to try to walk it off. That day the Plaza Art Fair had kicked off. I wasn’t sure what to expect, but this was HUGE. While Chicago has lots of smaller neighborhood festivals, this felt like one bigger, and much more organized event. Several blocks of the Plaza are shut down so that hundreds of artists (over 240 total) from all over can set up booths. 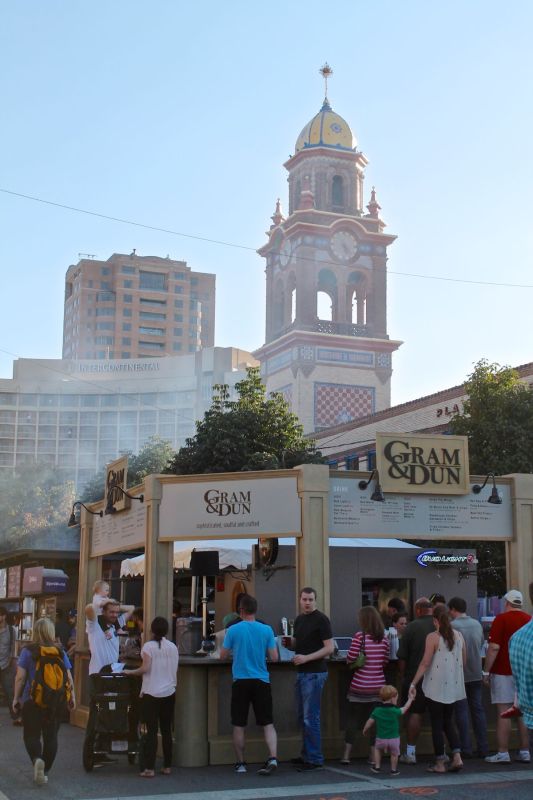 Twenty-three restaurants set up in three different sections setting up elaborate stands instead of basic tents. Plus there are three stages of music. This is a major occasion; the shops in the area get involved opening their doors and welcoming guests with drinks and snacks. The biggest difference between the Plaza Art Fair and all the Chicago festivals – you pay for food with cash. You don’t need to waste any money on those pesky tickets. 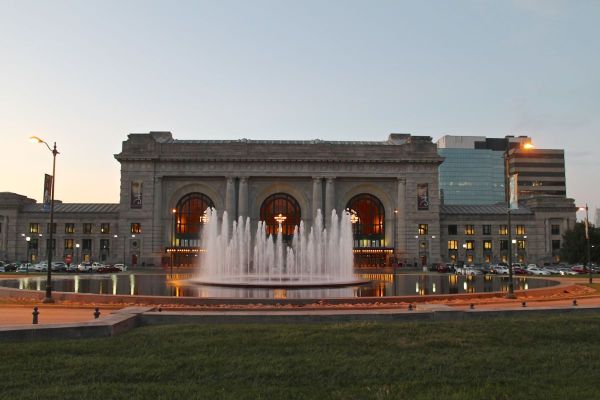 That night we joined friends at Kansas City Fashion Week at Union Station. The event was bigger and more elaborate than I had expected. Ten designers presented Spring/Summer 2016 collections, and my friend very kindly set us up with front row seats. 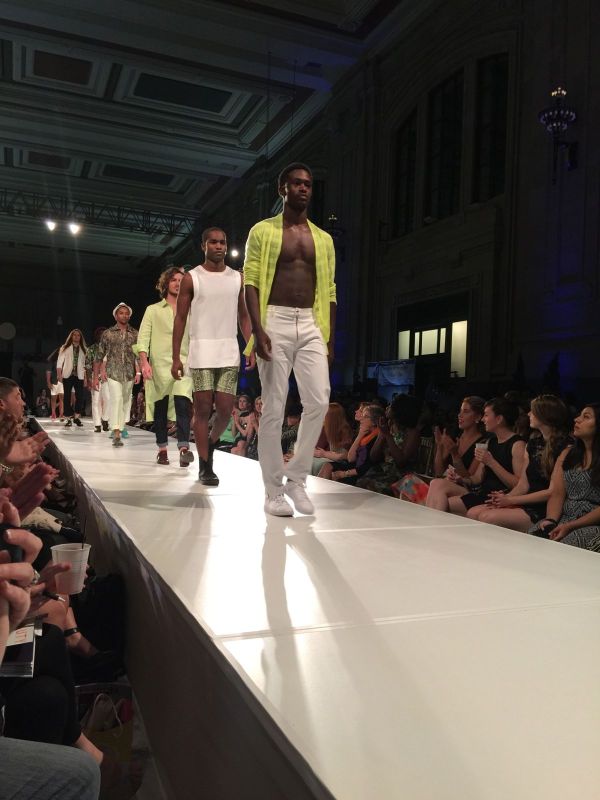 As a food blogger, I never get to attend fashion shows, so this was a special treat. 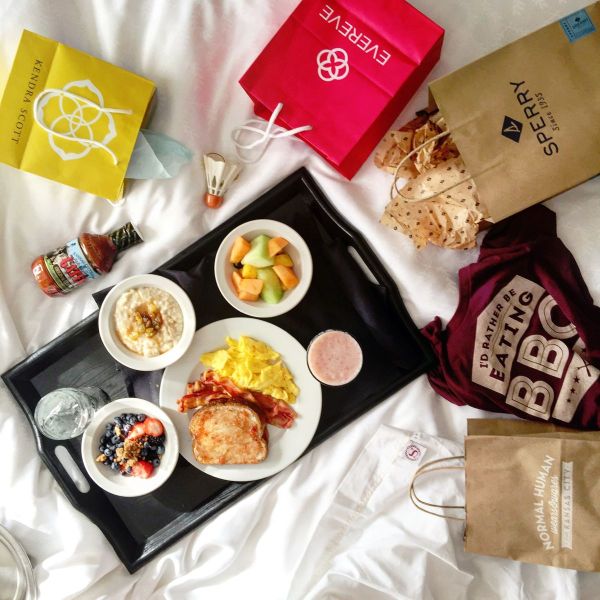 After two incredibly busy days in Kansas City, we took things a bit easier on day three, focusing our efforts on exploring the Plaza Art Fair. I started by day with a luxurious breakfast in bed at the Sheraton Country Club Plaza, while Charles hit the gym. 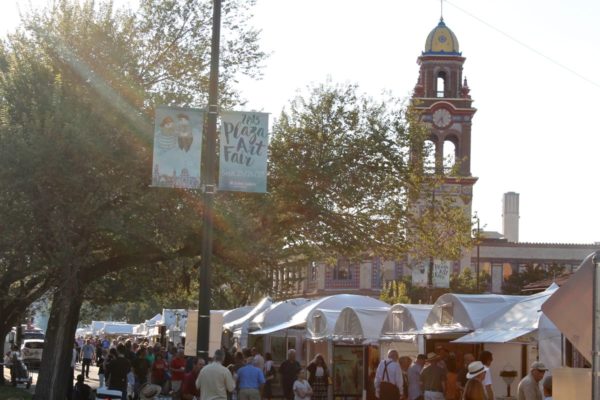 Then we walked to the Plaza Air Fair which was just a few blocks from our hotel in Country Club Plaza. 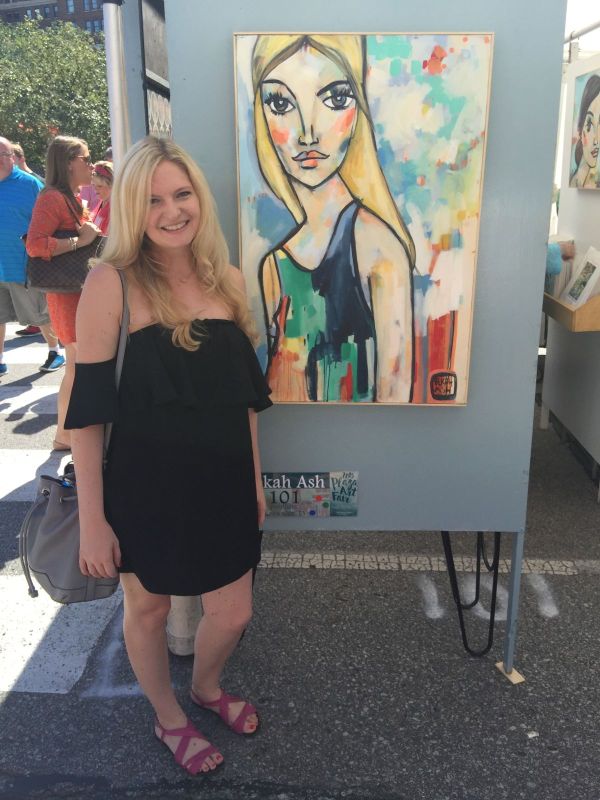 We began by checking out all of the artist’s booths, until we stumbled upon a painting that Charles thought looked like me. We loved the painting by Bekah Ash – and it is extremely rare that we agree on art – so we had to buy it. It will be arriving at our home in a few weeks, and I am excited for it to be a centerpiece in our home. With so many artists participating in the fair, there is something for everyone, and a wide range of price points. 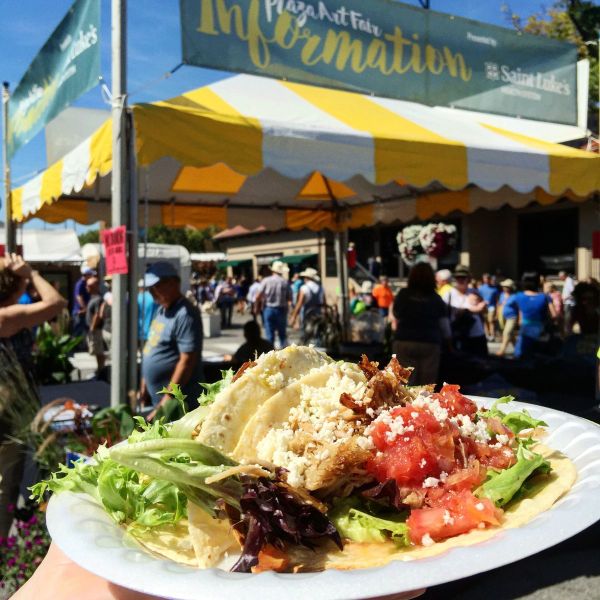 We worked up an appetite so we got lunch. Charles had pulled pork tacos from Classic Cup Cafe. 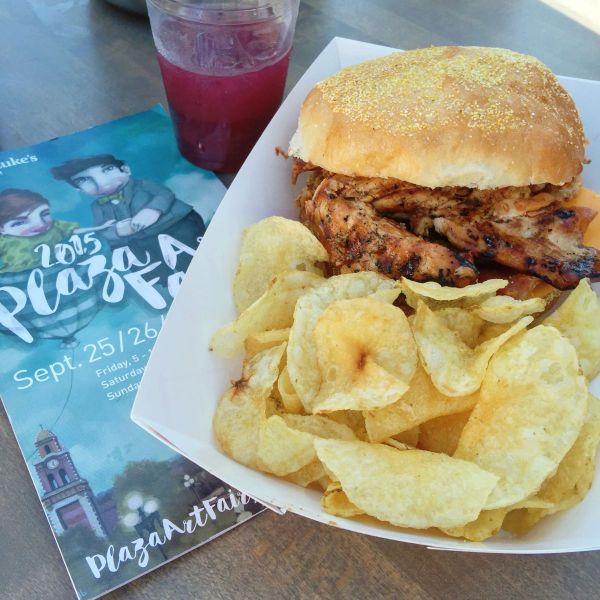 While I had a barbecue sandwich from Gram & Dun, and sangria from Classic Cup Cafe. The sandwich was a lighter take on bbq – just what I needed after eating so many ribs the day before. And the sangria was the best I have ever had. It was fruity without being overly sweet.

One thing that Charles and I kept on commenting on throughout our trip was the incredible pride KC-ers (I am not sure what they call themselves!) have for their city. It seemed like half of the people in town were wearing clothing supporting the city, and it added to the city’s charm. We had such a blast during our trip to KC! There was so much to do that we nearly wore ourselves out. This is a city that Chicagoans need to visit – especially since their fall since the weather was perfect.

This post was sponsored by Visit KC, but the opinions expressed are my own – and I am seriously in LOVE with Kansas City!!