You might want to make this Guinness Stew with Beef and Mushrooms for St. Patrick’s Day… 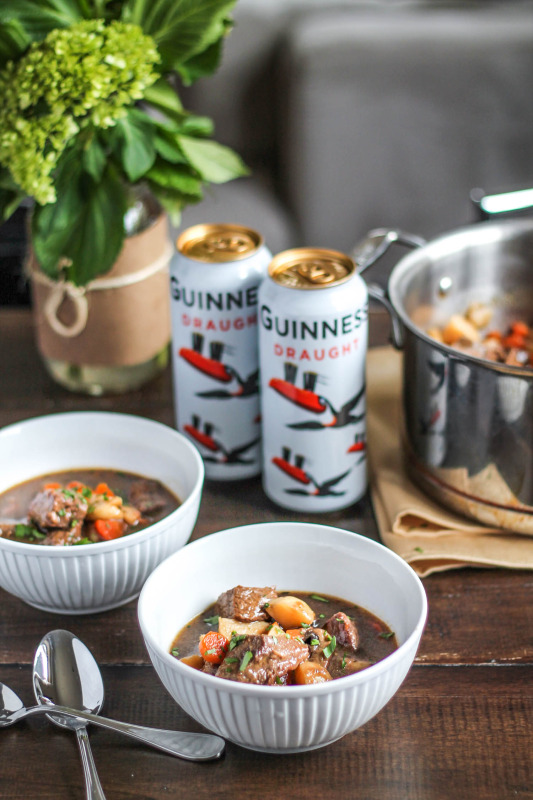 I thought that I would make something that is both festive – and not corned beef for St. Patrick’s Day. Inspiration struck and I made Guinness Stew with beef and mushrooms. Although mushrooms are not an ingredient in traditional Guinness Stew, they really added a lot to this recipe – I sautéed them in some Guinness to make them extra delicious. 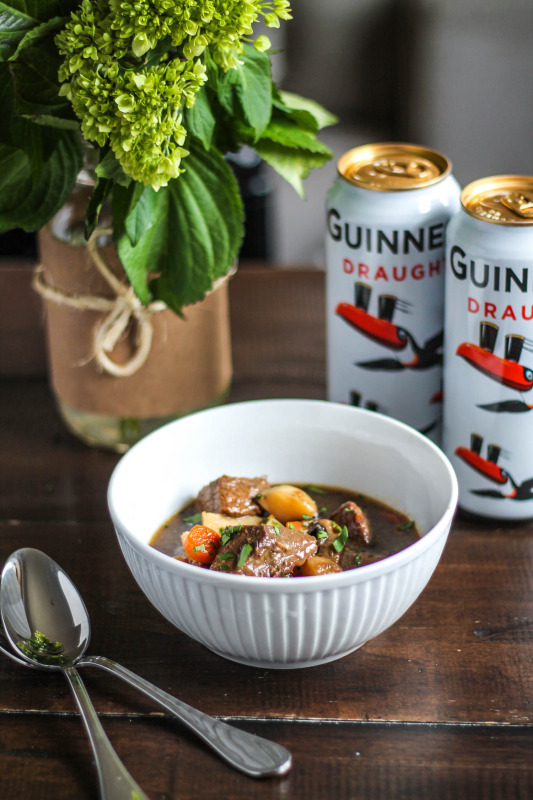 This Guinness Stew with Beef and Mushrooms also has chunks of potato, onion, and carrot. The Guinness gives this stew a rich flavor, but it doesn’t have a heavy beer taste, it is more of a subtle stout flavor. I added big chunks of potato, carrot, and mushroom to make the stew really hearty. The beef is so tender that it will nearly fall apart.

Compared to the other recipes on this site, this stew takes a bit longer to make. While the steps involved in preparing this recipe are easy, it does take a couple of hours from beginning to end since you want to slowly simmer the beef making it tender – so plan ahead. The active preparation time is only about 30 minutes, but the stew needs to simmer for 90 minutes. Be patient. I promise that it is worth the wait. And make extra, since this recipe is even better the next day. 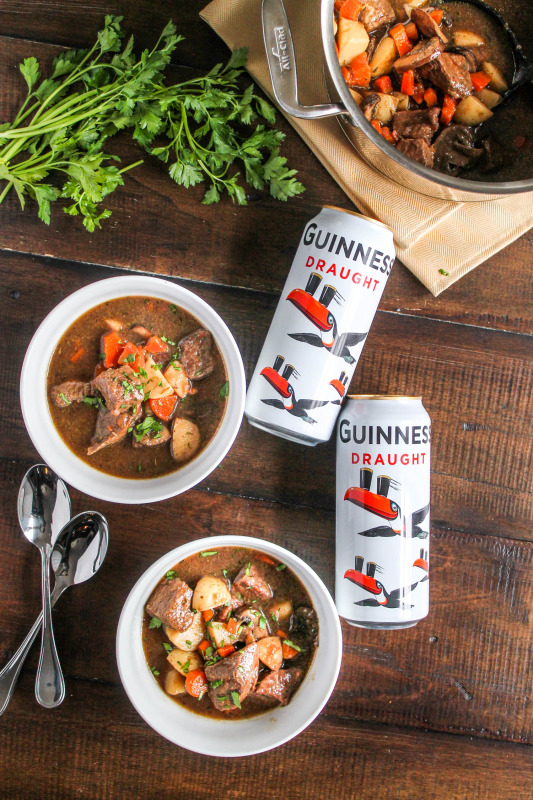 You can make this recipe with beef stew meat (chuck beef) or you can splurge a little and use a nice cut of beef. I used sirloin to make a smaller batch of the stew and it was phenomenal. I found a couple of smaller sirloin steaks at the grocery store and just chopped them up into small pieces. 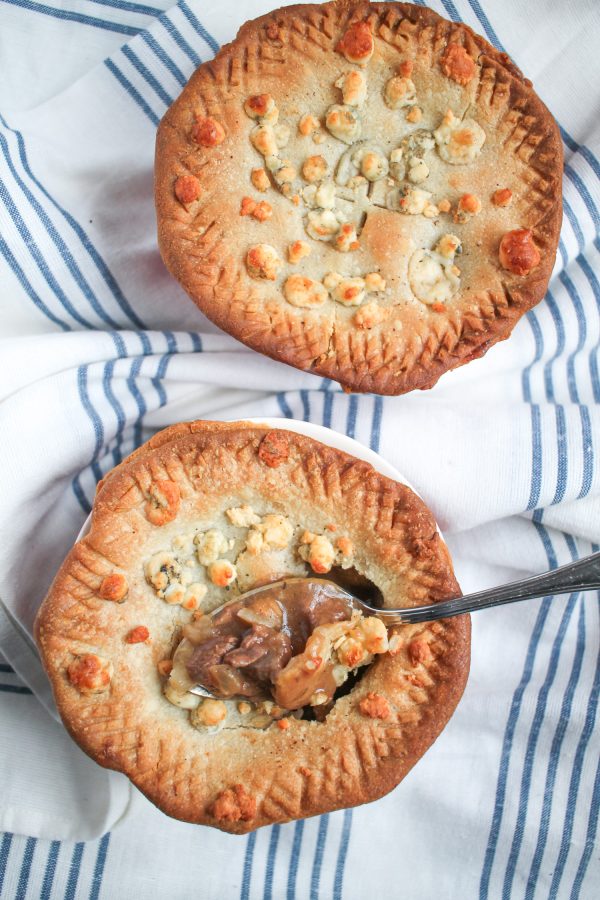 I used a version of this recipe to make Steak and Guinness Pies with a Blue Cheese Crust. The filling is just a thicker version of this stew with more finely chopped fillings. It’s definitely worth trying. If you want to use leftover Guinness Stew to make the pies, just thicken the broth into more of a gravy. Melt a tablespoon of butter, whisk in 2 tablespoons of flour, add it to the leftover stew and let it simmer and thicken.

How to make Guinness Stew with Beef and Mushrooms:

Guinness Stew with Beef and Mushrooms 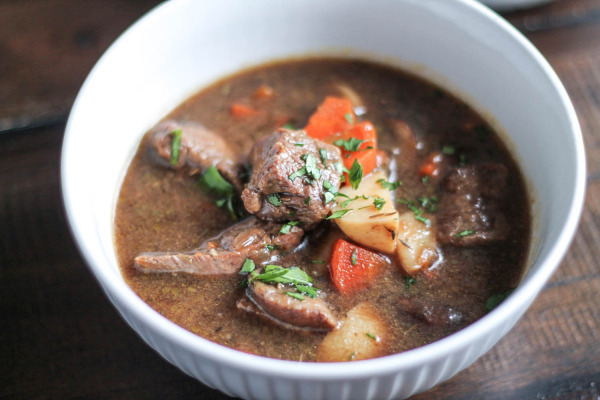 Want to save this Guinness Stew with Beef and Mushrooms recipe for later? Here is an image for you to pin: 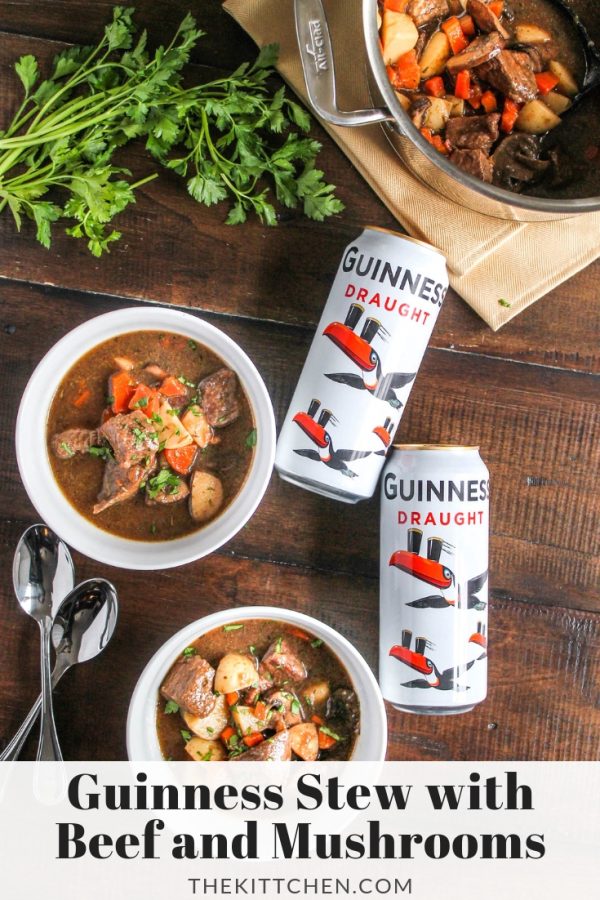 Yum! I love a good beef stew and I love a good Guinness. I definitely should try making something like this for dinner tomorrow to celebrate St. Patrick's day.