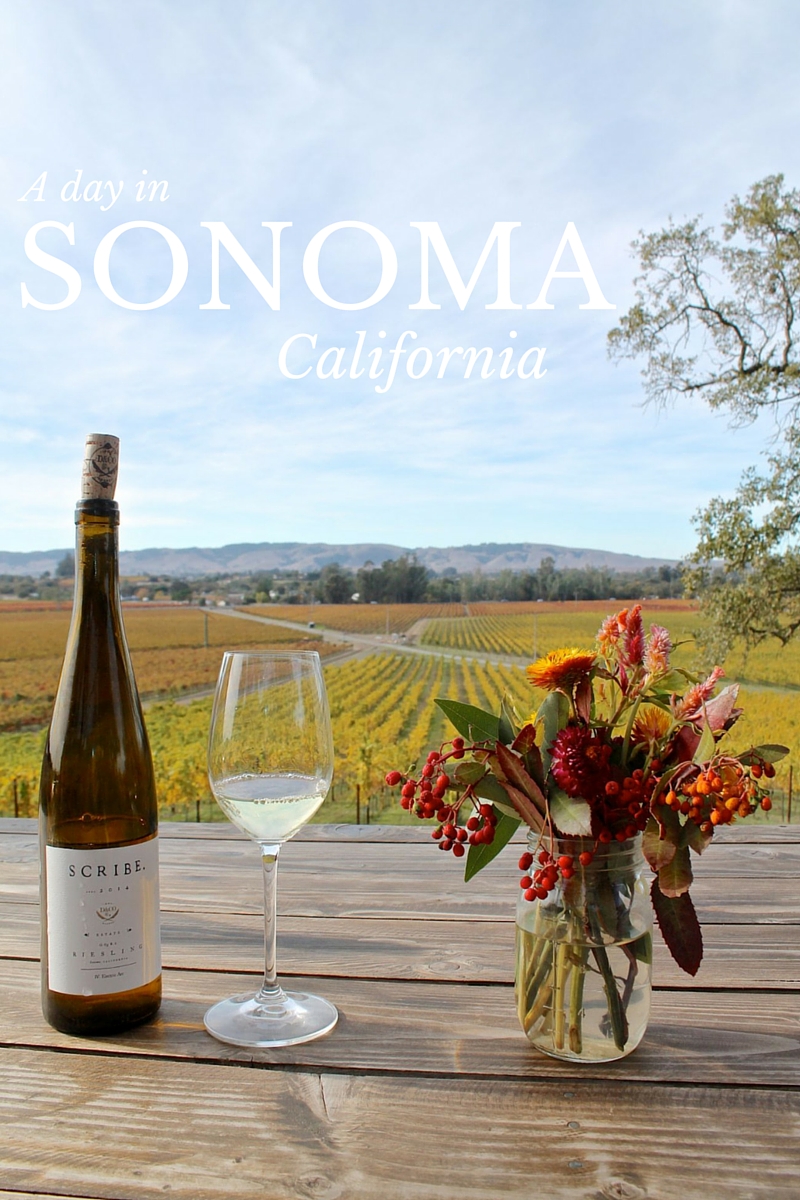 Are you ready to hear more about my trip to Sonoma? My Mom and I simply loved exploring the wineries in the area. On our first day we visited Domaine Carneroes and Matthaisson, and the next day we kicked things off with a tasting a Scribe. I was unfamiliar with Scribe, but my friends over at Formento’s highly recommended it, and it was a highlight of our trip. 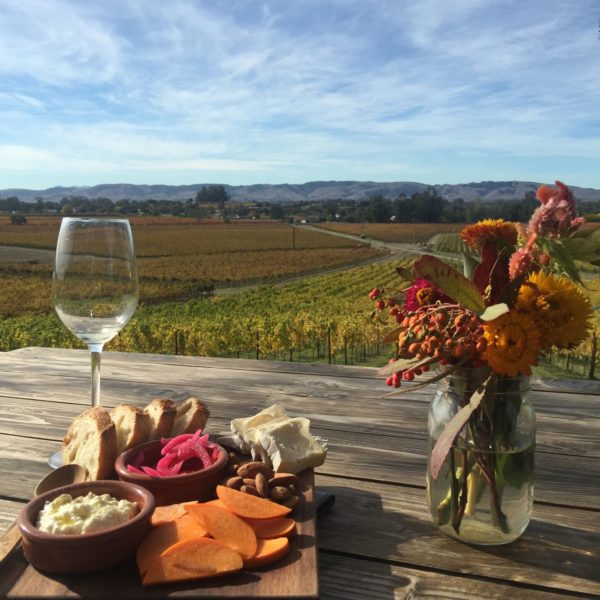 Scribe is located the southern part of Sonoma, tucked away into a hillside with incredible views of the fields below. We enjoyed a private tasting, and we got to learn about the history of the land and the founding of Scribe. We were welcomed with an amazing spread of cheeses, persimmon, pickled onions, and almonds that paired deliciously with the wines.

As we tasted wines, we learned that the Dresel brothers first planted the vineyard in 1858, and wine was being made on the land until the prohibition in the 1920s when the vines had to be ripped up. Then the land became a farm and orchard. When Andrew and Adam Mariani, fourth generation farmers, bought the land they brought it back to it’s roots cleaning it up and replanting a vineyard. Scribe’s vineyards were planned in 2008, and the first harvest was in 2011, but the Mariana brothers had been making wine since about 2004. 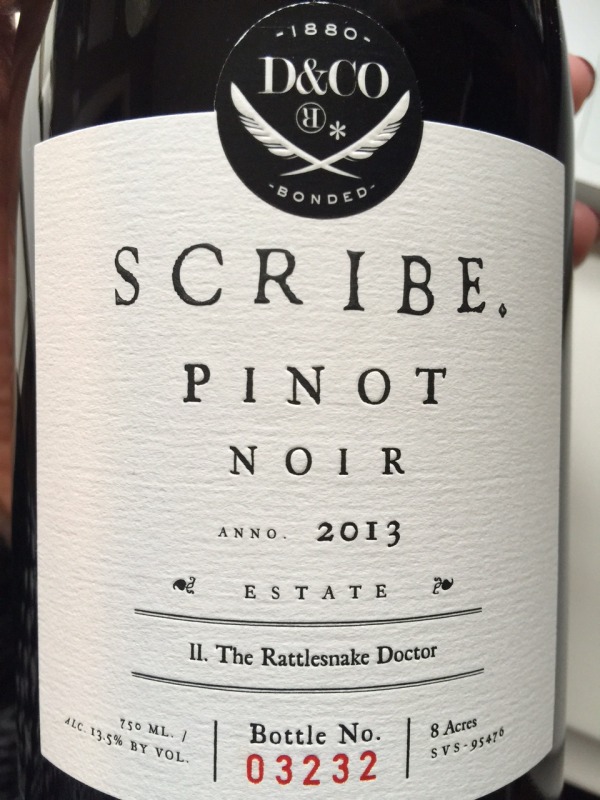 They named the vineyard Scribe because they want to honor the land’s history, and they see themselves as the scribes of the land. Each bottle is labeled like the chapter of a book, since each vintage is another chapter in the land’s history. My favorite wine was the Pinot Noir, and I brought two bottles home since I know that Charles will love it. This Pinot Noir is called “The Rattlesnake Doctor” and Andrew considers it his proudest professional moment. 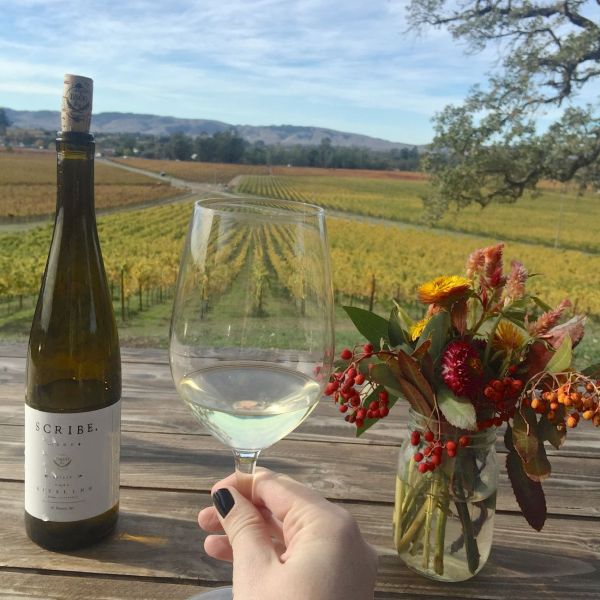 The first wine that we tasted was a dry Riesling. The Dresel brothers planted riesling grapes that they brought over from Germany, and Scribe’s riesling wine acknowledges the history of the land. I think that when most people think of rieslings they assume that they are going to be sweet, but this was crisper and more refreshing than most other rieslings I have tried. 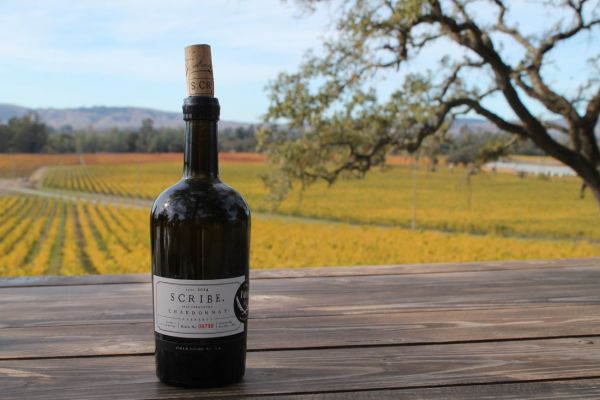 My mom and I aren’t big fans of Chardonnay but we liked the lighter un-oaked skin fermented Scribe Chardonnay. The skin fermentation gives the wine an orange color, and these wines are referred to as “orange wines”. This is a more experimental wine, and Scribe makes an experimental wine at least once a year. 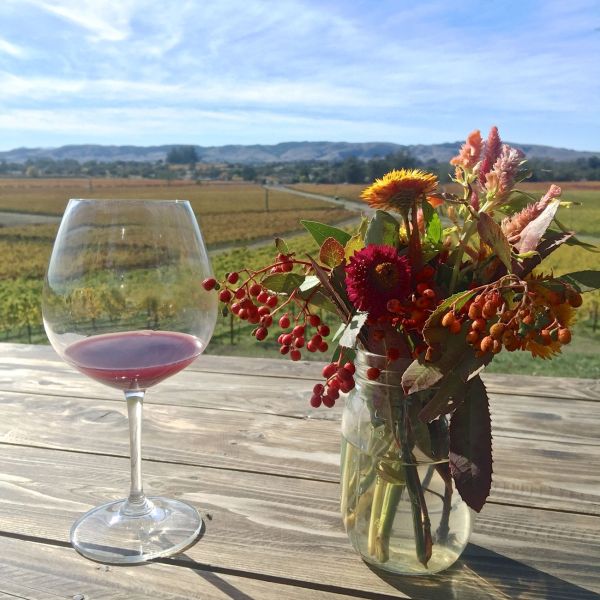 Andrew Mariani gave us a visit and poured us some of Scribe’s Nouveau, a bright fresh juicy wine that was a special treat. Unfortunately it sold out almost the instant it became available, but I will be keeping my eye out for it next year. I thought the cloudy pinkish appearance of this wine was beautiful, and I liked how different it was from all the other wines I tasted throughout my time in California.

Scribe’s wines are $50 or less (except for the magnums) and I think that you should try them. If you find yourself in Sonoma, add Scribe to your itinerary. The winery itself is gorgeous, and it’s the perfect place to hang out on a sunny day. Conveniently, Scribe is one of the wineries that is the closest to San Francisco, and it’s near the boarder of Napa and Sonoma. 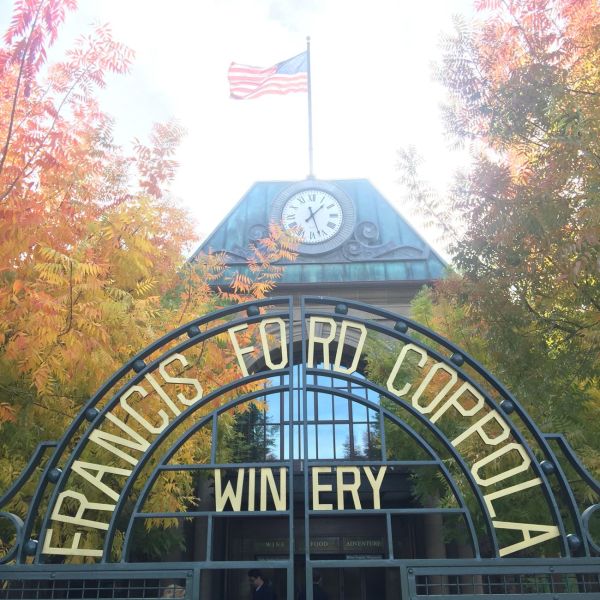 Several people had recommended that we visit Francis Ford Coppola Winery, so we made the trek across Sonoma to check it out. Honestly, I wouldn’t recommend it. The winery had atmosphere more fitting for an amusement park. 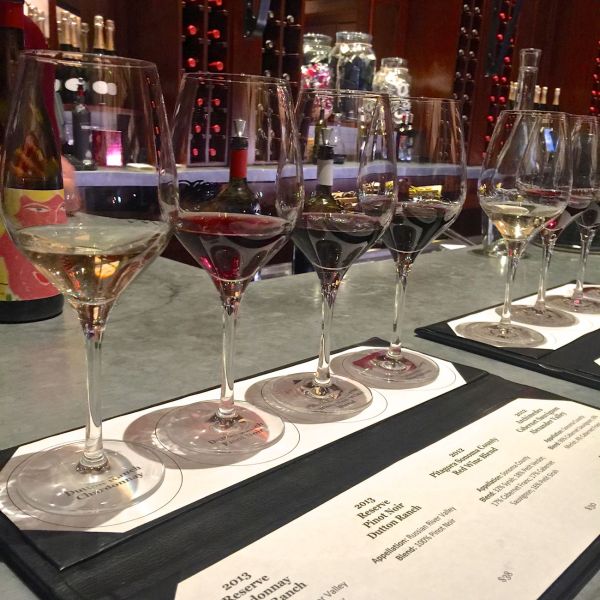 It felt commercial and touristy, and when we did the tasting there was no emphasis on educating us on the wines. The wine were good, but not exceptional. 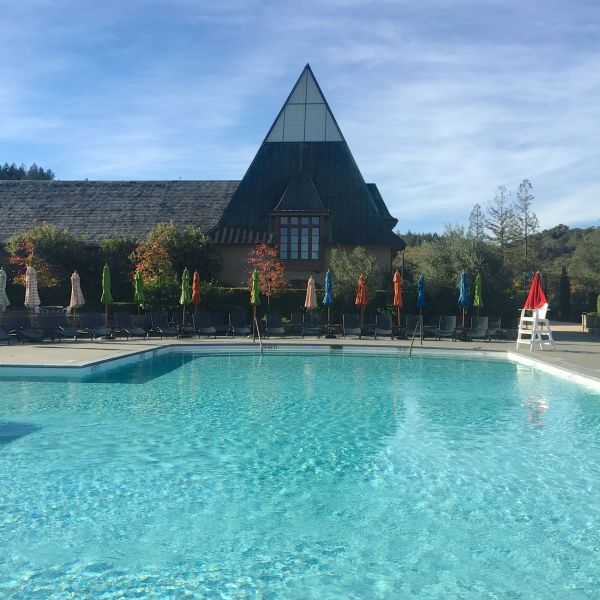 If you are serious about learning about wine, skip Coppola. But, if you want to take a break and see some memorabilia from FFC’s films, you would love it. There is a lovely pool and you can rent cabanas and lounge in the summer. 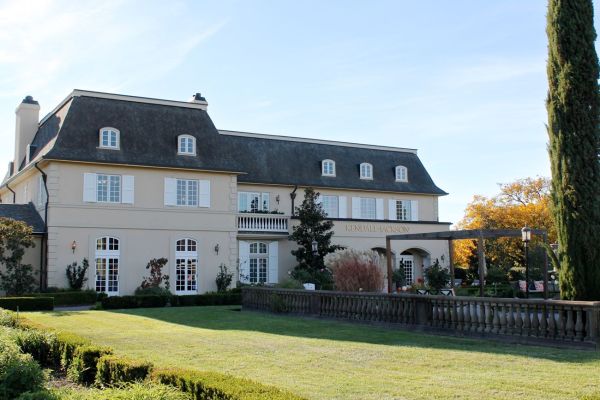 Our last stop of the day was Kendall-Jackson Estate and Gardens. I had met the lovely folks from Kendall Jackson at a private rooftop wine dinner over the summer, and reached out to them when I started to plan my trip to Sonoma. And they were incredibly welcoming and they really made us feel really special. You are probably familiar with Kendall Jackson, since their wines are popular on restaurant wine lists and are available at most grocery stores. Kendall-Jackson Vintner’s Reserve Chardonnay is the most sold Chardonnay in the United States. I really like the K-J Avant Red Blend – it’s an affordable wine that pairs well with most food. 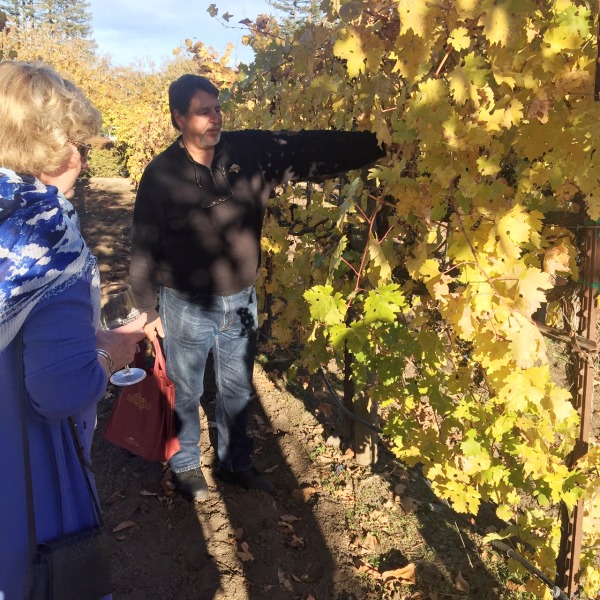 When we arrived at Kendall-Jackson, we were greeted by Will, who handed us glasses of wine and then took us to tour the property. He showed us the viticultural garden which is home to grapes that they keep on property, but don’t harvest, so that they can use it has an education stop along their tours. We visited in late November and the grape leaves were turning colors. 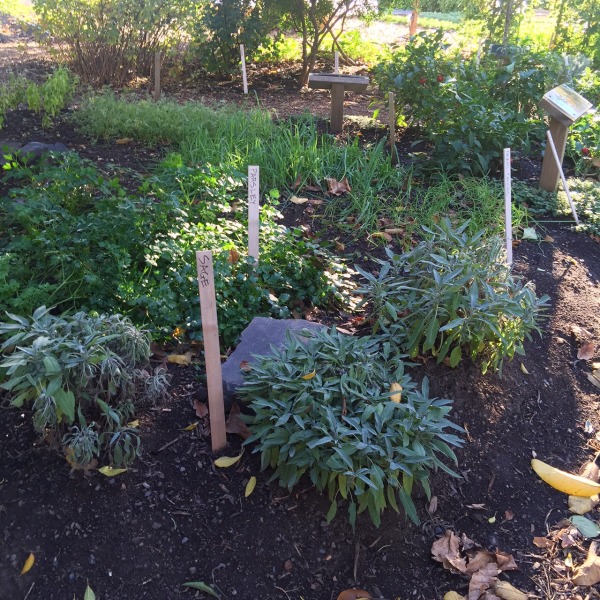 Next we met Kendall-Jackson’s Director of Culinary Gardens, Tucker Taylor, who K-J recently stole away from The French Laundry. Tucker is someone who clearly loves his job, and he had lots of pride for the large gardens he oversees. The gardens hold everything from common herbs like parsley and sage, to on trend vegetables including several varieties of kale, and some more exotic vegetables like yacon (a root vegetable that is part of the daisy family) and broccoli spigarello. The foods grown on the property are used by Kendall-Jackson’s chefs. 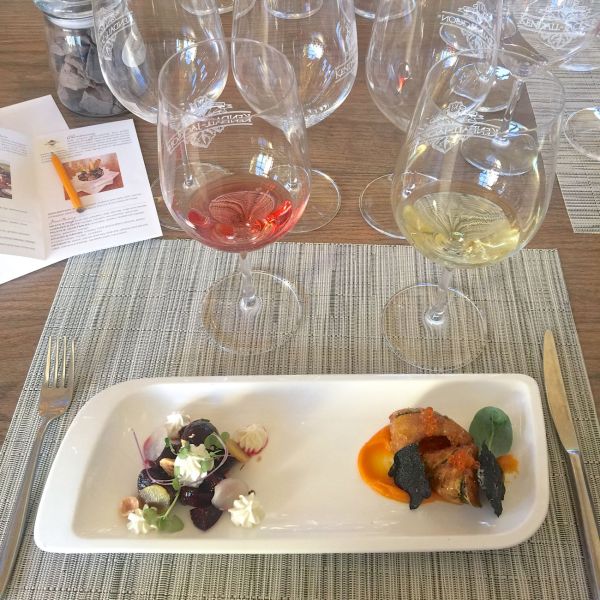 Next we moved inside and settled in for “The Kendall-Jackosn Sensory Experience” a seven course wine pairing created by Chef Matthew Lowe who personally presented each impeccable course. We began with roasted beets topped with delice de la callee cheese, pickle kohlrabi, and hazelnuts. This was paired with the Grand Reserve Rosé whose mineral flavor matched the earthy taste of the beets. Crispy acorn squash on a bed of miso butternut puree with oyster leaf and trout caviar was paired with the Jackson Estate Camelot Highlands Chardonnay. Tucker had introduced us to the oyster leaf outside in the garden. It’s a fascinating plant whose leafs actually taste like oysters. This was a sophisticated take on the sweet and salty flavor combination and I loved it with the slightly buttery chardonnay. 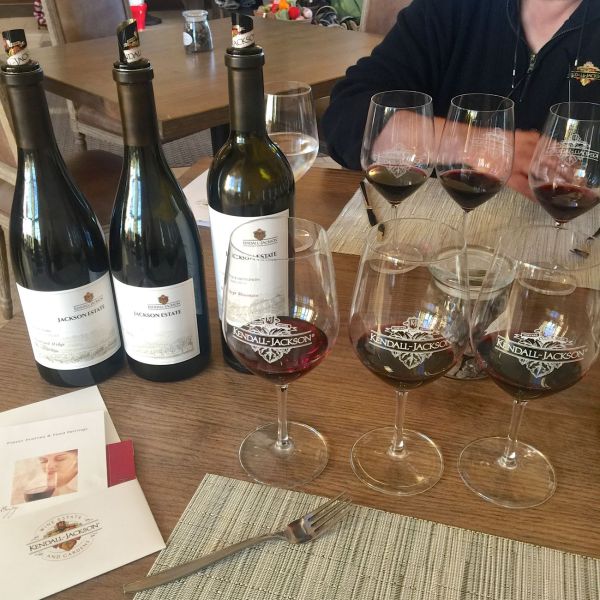 Sometimes food is so extraordinary, that I forget to take a photo. #Foodbloggerfail, I know. But trust me, the trio of small bites that came next was extraordinary. I did manage to take a photo of the wine. Prosciutto with picked peppers and strawberries, topped with shiso (a Japanese herb) was paired with Jackson Estate Outland Ridge Pinot Noir, a high elevation Pinot Noir from the Russian River Valley. It’s a full bodied wine that complimented the salty prosciutto. A sweet tea brined pork belly slider with a red wine BBQ sauce paired with the Jackson Estate Alisos Hills Syrah. The jammy BBQ sauce and the syrah with pepper notes and dark berry flavor were wonderful. My mother has not stopped talking about how much she loved this slider. A portion of flat iron steak came with charred eggplant puree, fingerling potatoes, and mushrooms. I have had charred eggplant puree paired with beef before and I love its earthy flavor and it was a great pairing for the intense Jackson Estate Hawkeye Mountain Cabernet Sauvignon. This was the biggest boldest wine that we tasted. 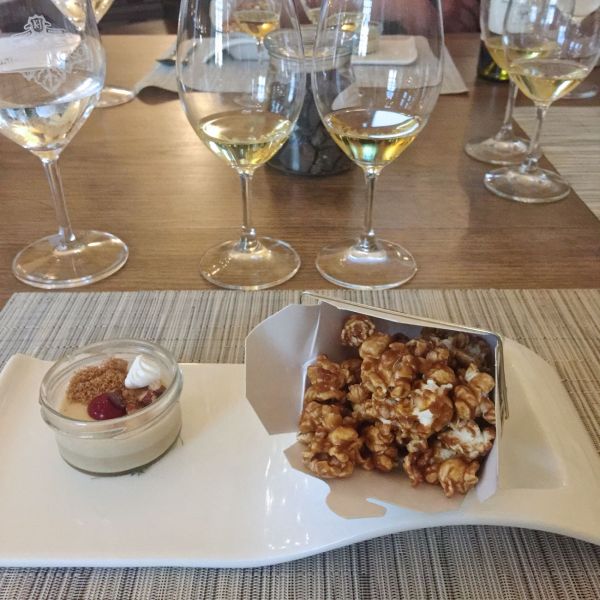 The experience culminated with a duo of desserts. A butterscotch panna cotta was paired with the Grand Reserve Late Harvest Riesling. I think that both butterscotch and rieslings tend to be under-rated; they aren’t trendy even though they are excellent. Riesling has a reputation for being sweet, but only some rieslings are sweet, and this riesling was not overly sweet. The fruit notes of the wine matched the lightness and sweetness of the panna cotta. The last course was caramel popcorn. I loved this playful touch. Wine tastings can be so overly serious, when they should really be fun, and the caramel popcorn ended everything on a light hearted tone. The caramel corn (which is better than Garrett’s) is from an old family recipe and it was paired with the Grand Reserve Late Harvest Orange Muscat, a wine with orange flavors and a balance of acidity and sweetness.

The amazing thing about Kendall-Jackson is that their garden tours, tastings, and culinary pairings are available to the public, you just need to book an appointment in advance. It’s definitely worth the trip. When I visit wineries I genuinely want to learn, and we learned about viticulture, gardening, food, food and wine pairing, and many of Kendall-Jacksons wines during our visit. Thank you to Kendall-Jackson for your incredibly generous hospitality. You have also given my mother the impression that I spend my days being wined and dined.

At the end of the way we were full and happy, and we uber-ed our way back to our hotel. On our second day in Sonoma we relied on Uber to get around, and had no problems doing so. Uber is a bit newer in Sonoma, and there aren’t as many drivers so it might take 10-15 minutes to secure a ride, but it is significantly more affordable than hiring a driver, which usually costs $50 an hour. We spent our time in Sonoma at the Fairmont Sonoma Mission Inn. The large hotel is just 10 minutes from Sonoma Square, and it has its own spa. I should mention that there were lots of extra costs at the hotel. Parking, WiFi (it was $14 a day!!), and breakfast added up, but we did have a pleasant stay.

Next week I will be finishing up my posts about California and sharing a guide to a perfect day in Napa.