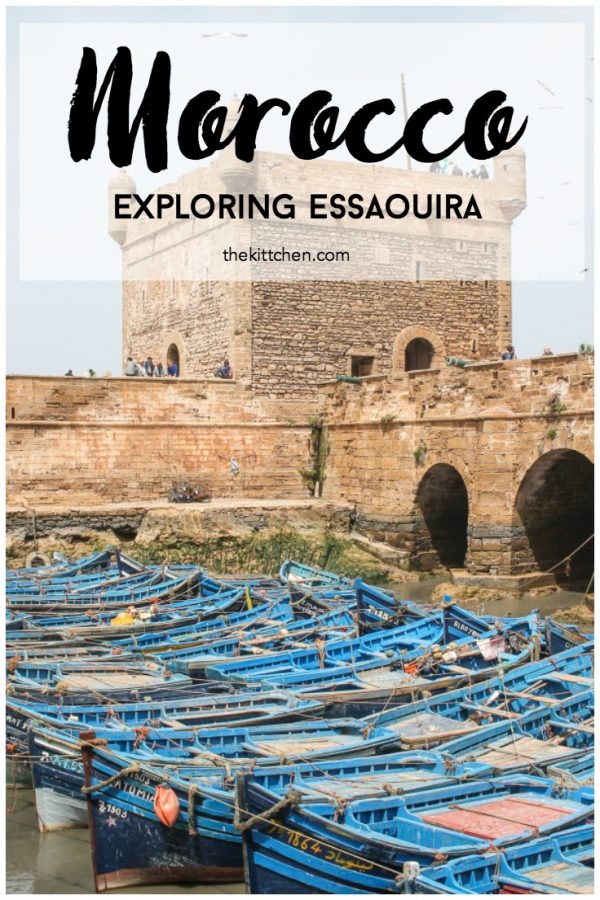 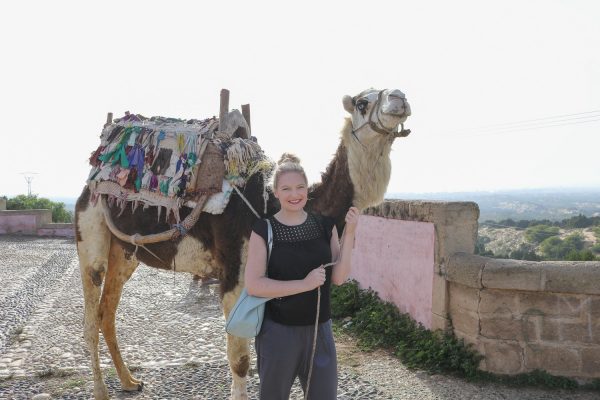 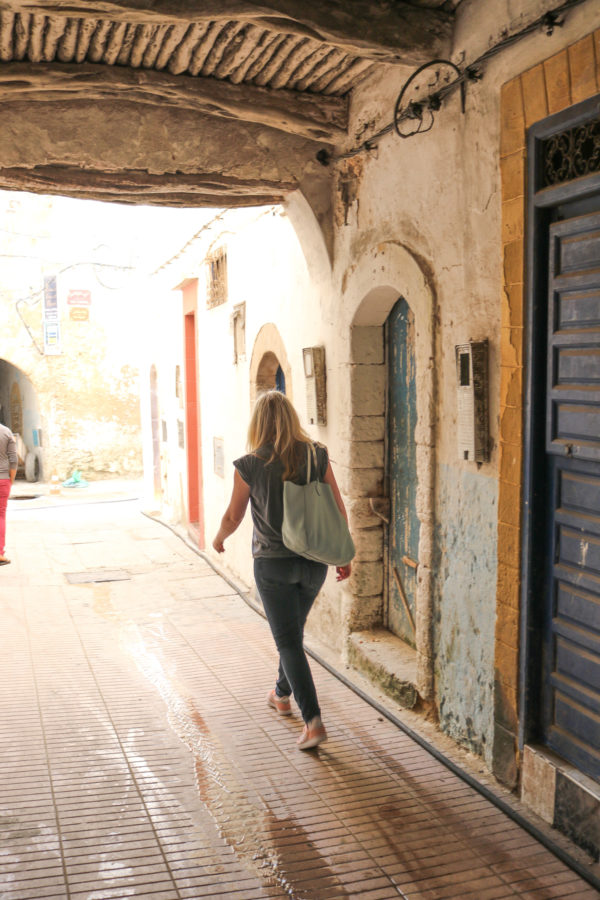 Essaouira is a beach town about a 3-hour drive from Marrakesh. It’s less expensive and easier to navigate than Marrakesh, and the food and shopping are incredible. Like Chicago, Essaouira is known for being windy. The sea breeze keeps Essaouira from becoming too hot for the summer, and it is a retreat from Marrakesh which gets unbearably hot in the summer months. 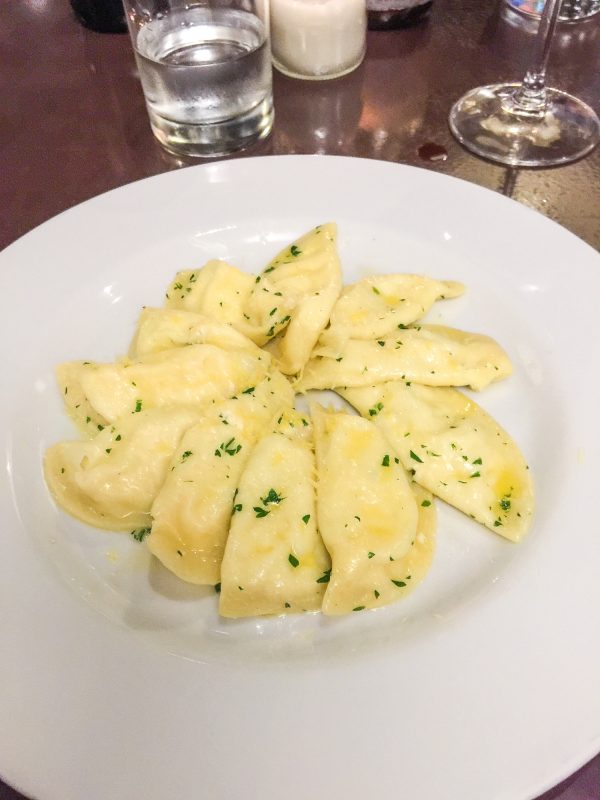 We arrived in Essaouira in the evening, and by that time we had been in Morocco for a week. We needed a break from tagines, so we headed to Gusto Italian, a small but charming restaurant by the beach, and it was delicious. I had ricotta ravioli made with freshly made pasta and a light lemon butter sauce. The wines were affordable, and the tiramisu was a delight. The total bill for the three of us came to only about $60. 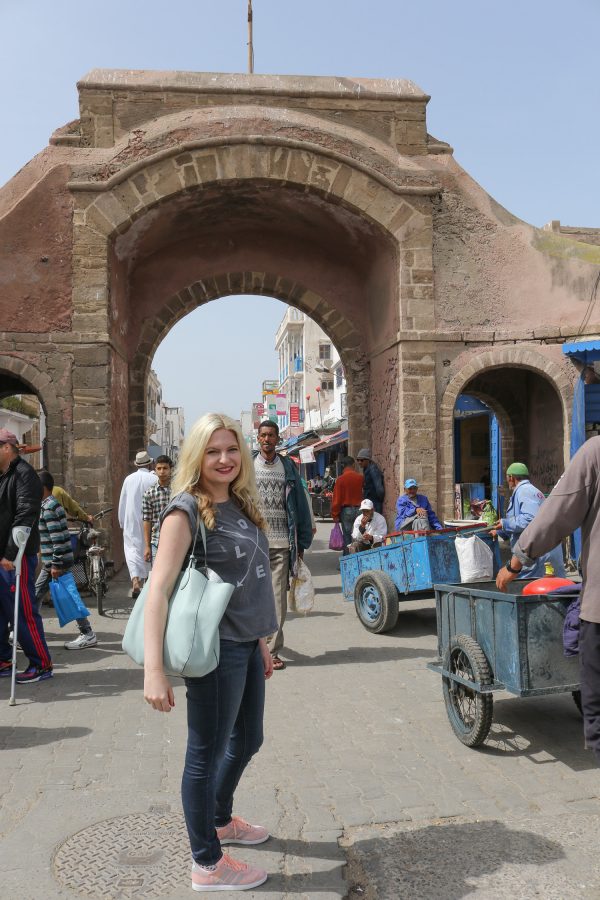 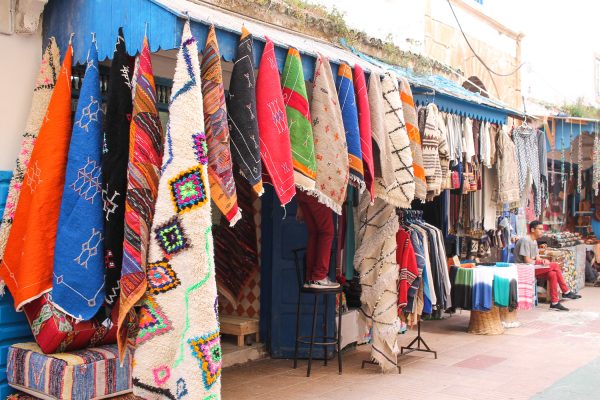 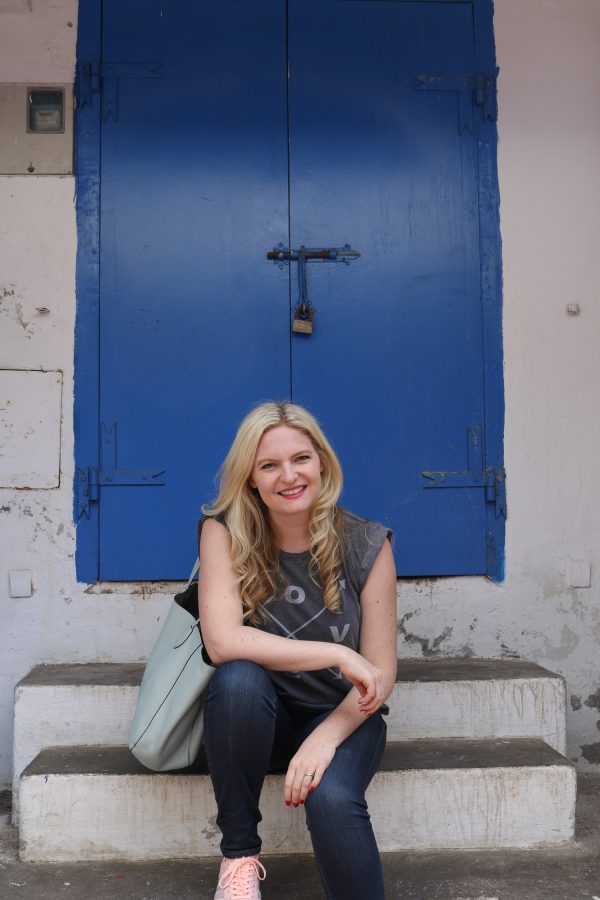 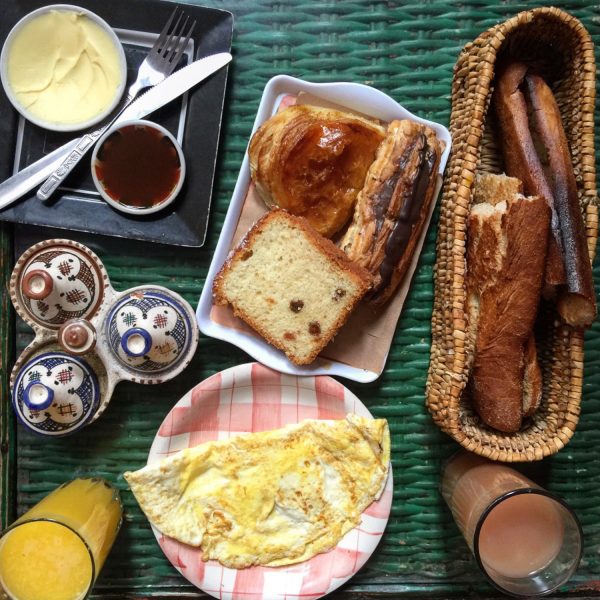 Before we started shopping we stopped at Patisserie Driss for breakfast. The bakery serves freshly made pasteries and omelets, it’s located right in the Medina, and its prices are far more reasonable than our hotel’s. We each got omelets, tea, juice, and pastries and the total was just $15. If like to eat, Essaouira is the place for you. We noticed that the food had more of a French influence than the cuisine in Marrakesh. 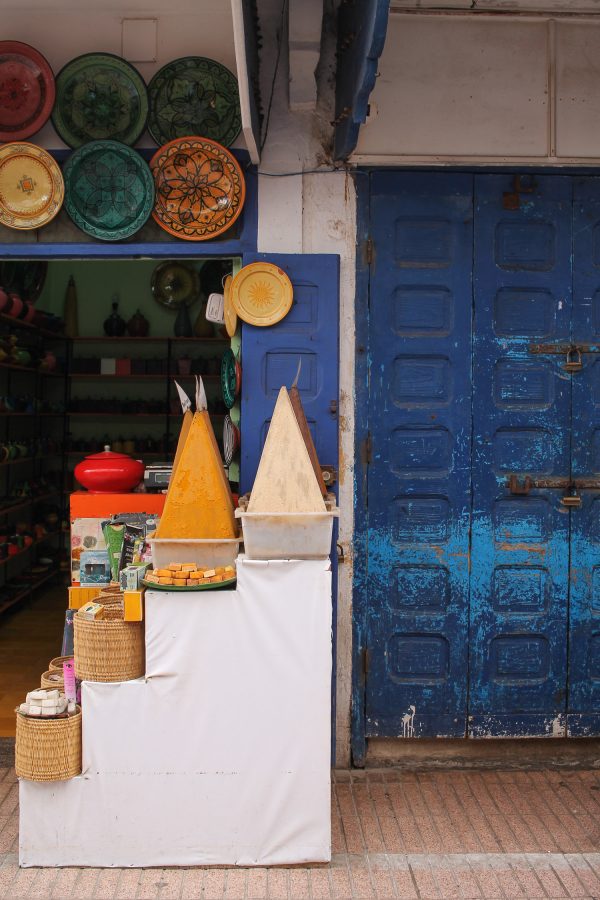 After eating a big meal for breakfast, it was time to shop. Kelly bought some beautiful wooden instruments for about $15 each. I couldn’t resist buying another Berber Wedding Blanket. I love the big sequins on these blankets. We also got some more ceramics. 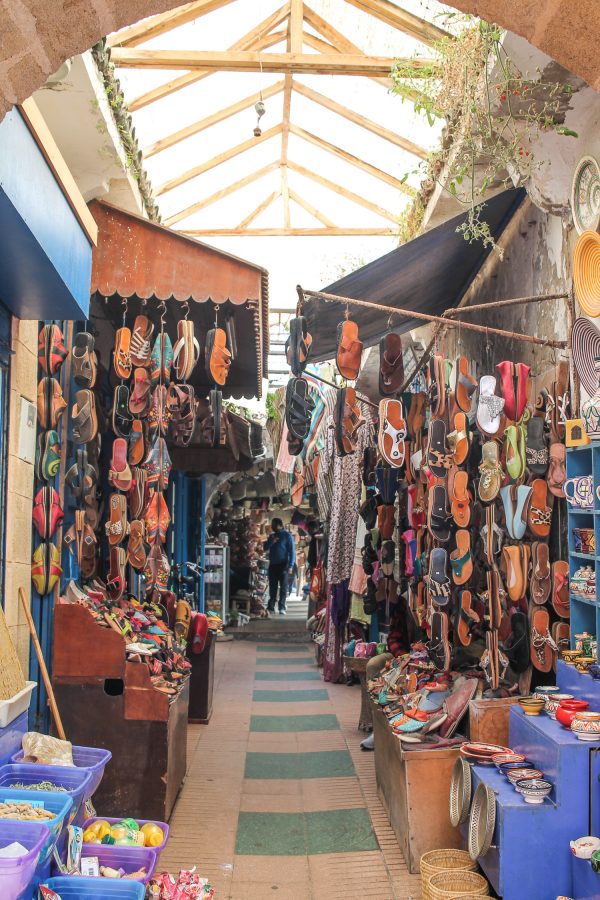 The souks in the Medina in Essaouira seemed calmer and were much easier to navigate. No one harassed us at all. Plus, since Essouira is much smaller we didn’t worry about getting lost. Kelly and my Mom repeatedly commented that they wished someone had told them to save all of their shopping for Essaouira. We thought it was easier and less expensive. 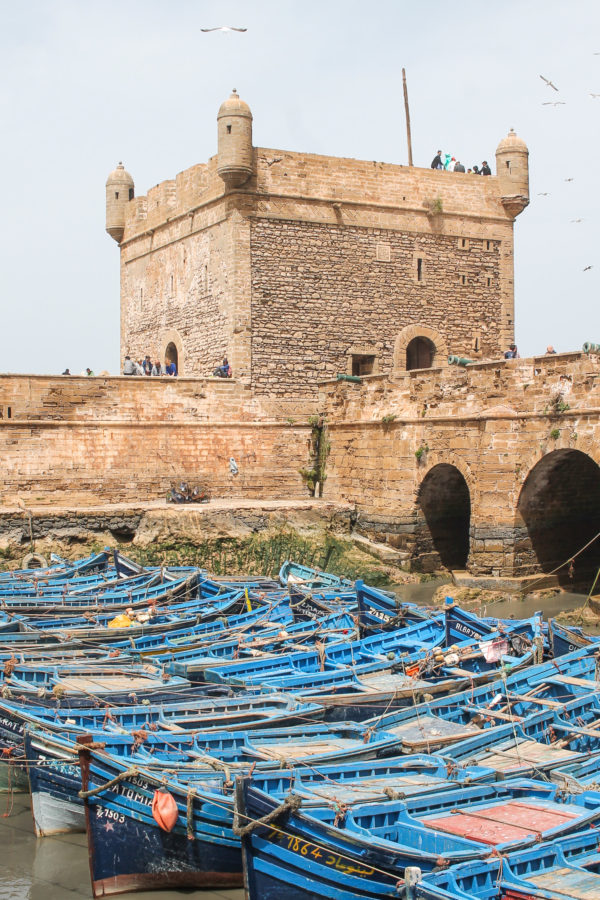 After the market, we walked over to the old fortress in the port. Kelly explained that this is a filming location for Game of Thrones. 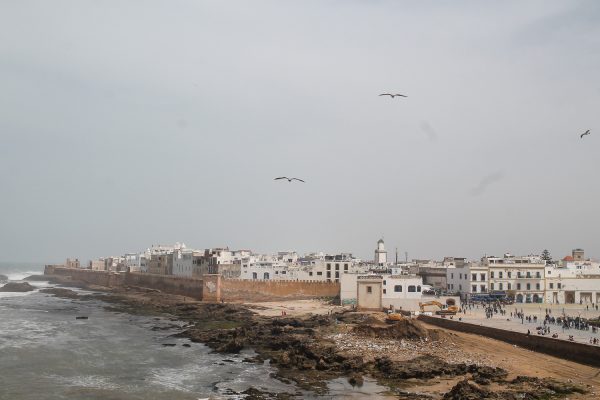 The top of the fortress offers sweeping views of the city and the port, and was a nice spot to take photos. 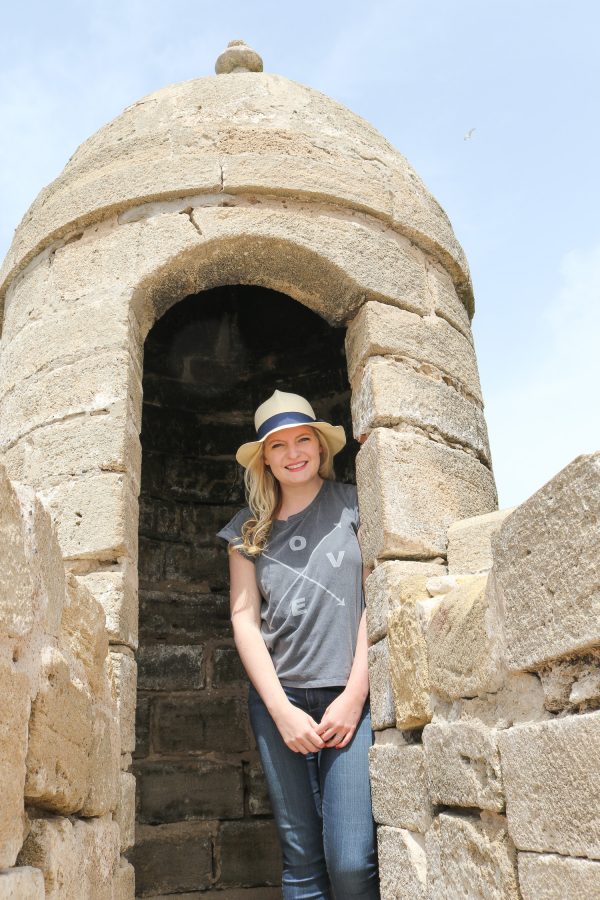 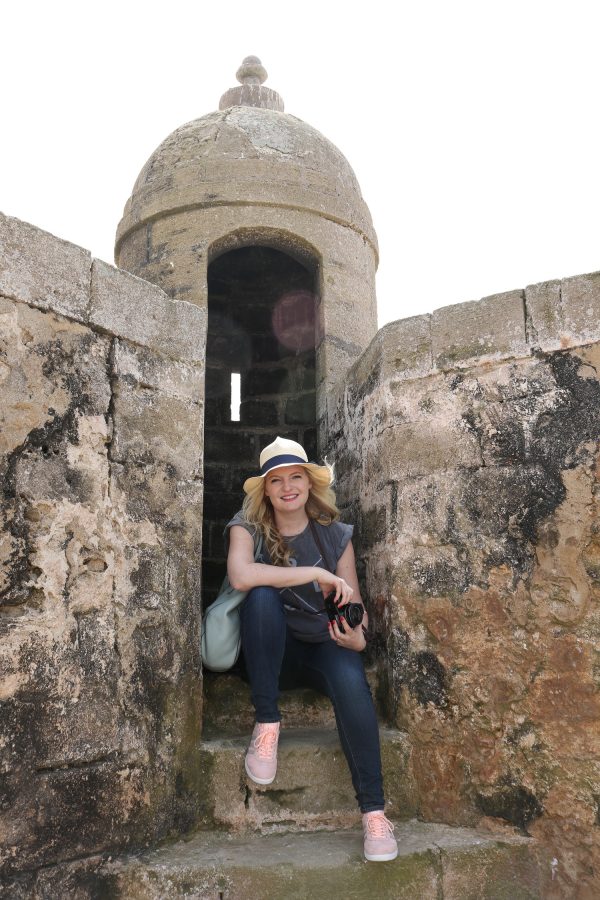 I took advantage of the fact that Kelly doesn’t mind being my photographer and got her to take a bunch of photos for me. I am wearing the hat Charles bought for me in San Juan when I was having a bad hair day. 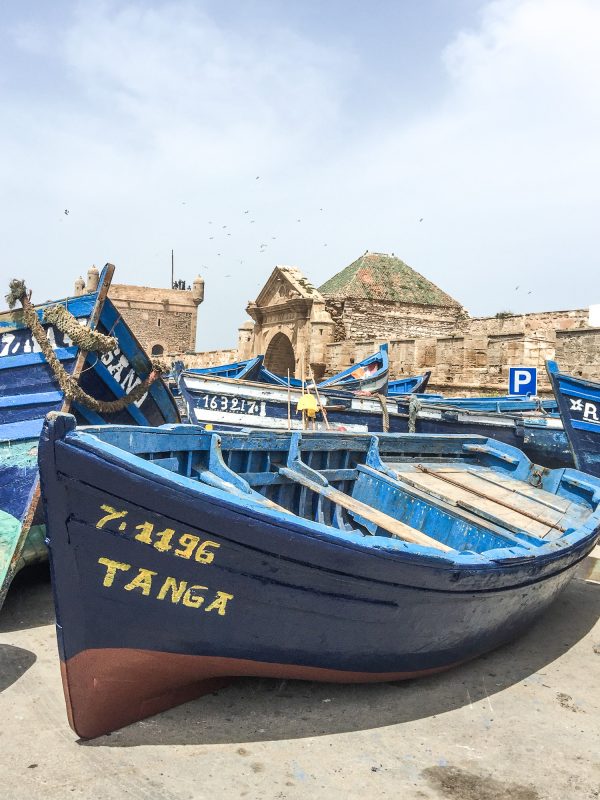 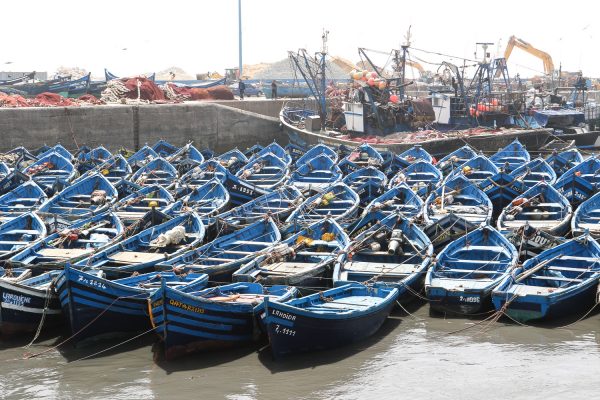 Essaouira is known for its vibrant blue fishing boats and they were all lined up on the waterfront. 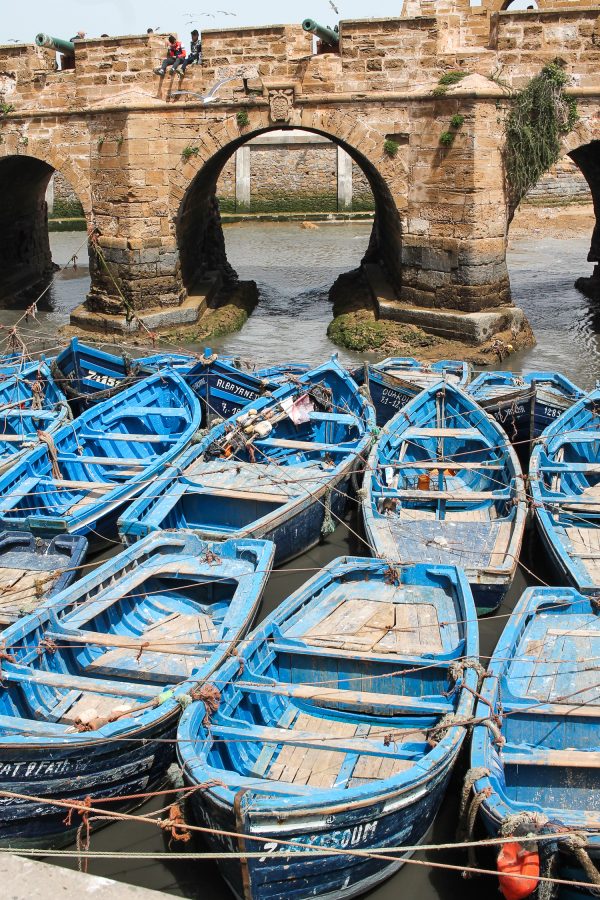 At lunch time a bunch of restaurants beside the port serve simply prepared fresh fish. 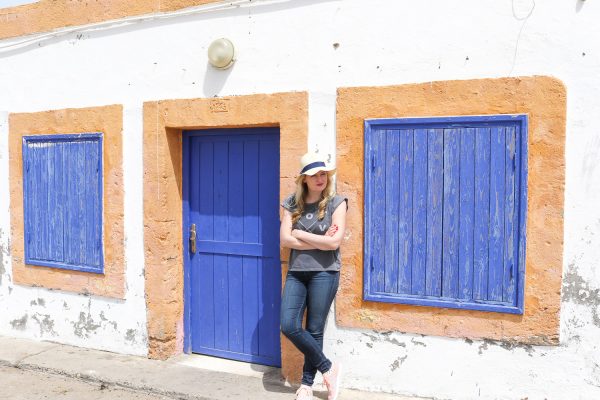 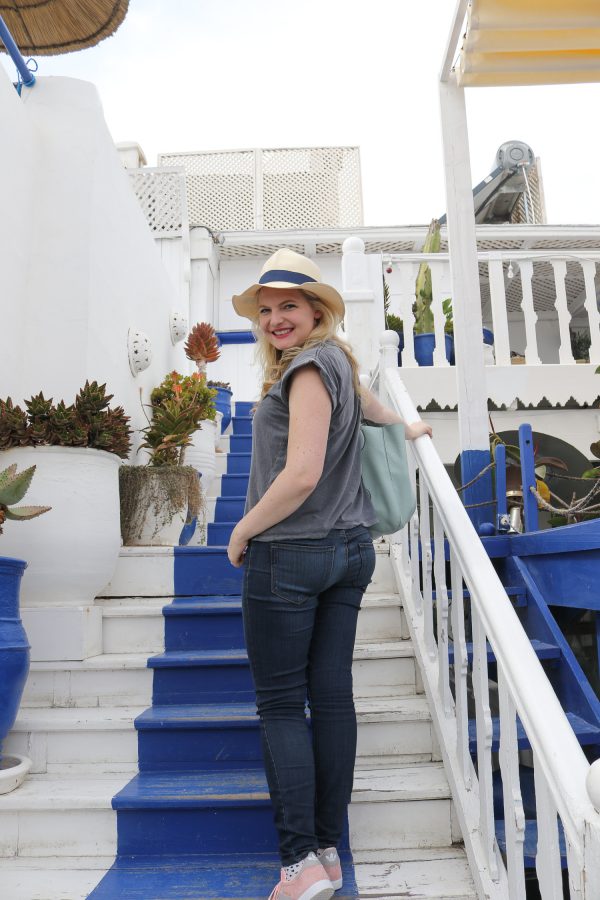 We opted to go to Taros Restaurant for lunch, since it had been recommended on several websites. The restaurant/bar has a huge multilevel rooftop terrace with views of the city and waterfront. 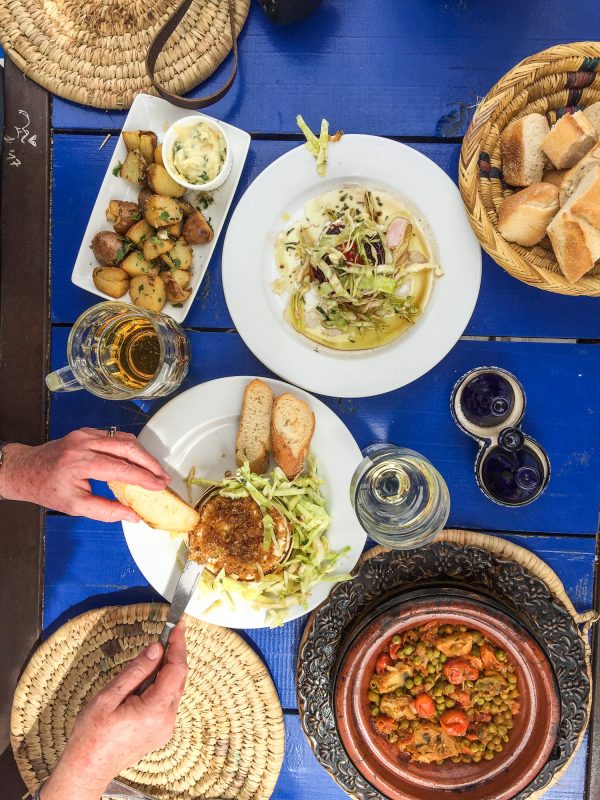 The food was excellent, and a bit more Mediterranean than Moroccan. We had baked brie, a beet and goat cheese salad, patatas bravas, and an artichoke tagine. 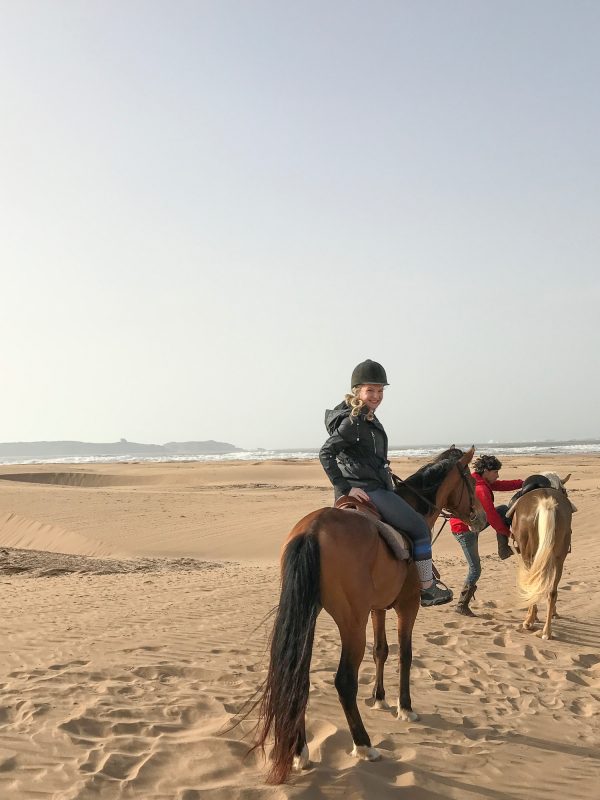 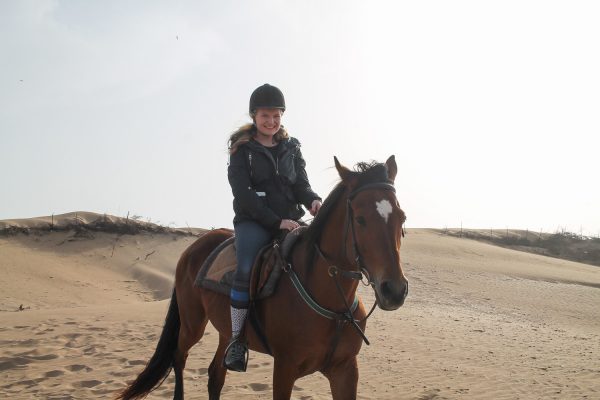 This time my horse, Flamenco, wanted to eat all of the trees in sight, and when we got to the beach he decided to get down and roll around in the sand. He definitely had a mind of his own, and luckily I was able to jump off the horse before he could crush me in the sand. Meanwhile, Kelly was singing songs to her horse about what a good horse he was. The horseback riding was only $75 for three people – such a deal. Maybe just don’t pick Flamenco.

That night we went to The Loft for dinner. It’s right in the Medina, and it was one of the best meals we had in Morocco. Their specialty is a more modern Moroccan cuisine, which was perfect since we still weren’t ready for more tagines. We ordered a crispy chicken with an avocado sauce, a noodle dish with chicken and vegetables, and beef with pears and mashed potatoes. And we all loved the crispy goat cheese rolls with almonds, raisins, and honey that we shared as a starter. Unbelievably, this meal cost less than $50 total. 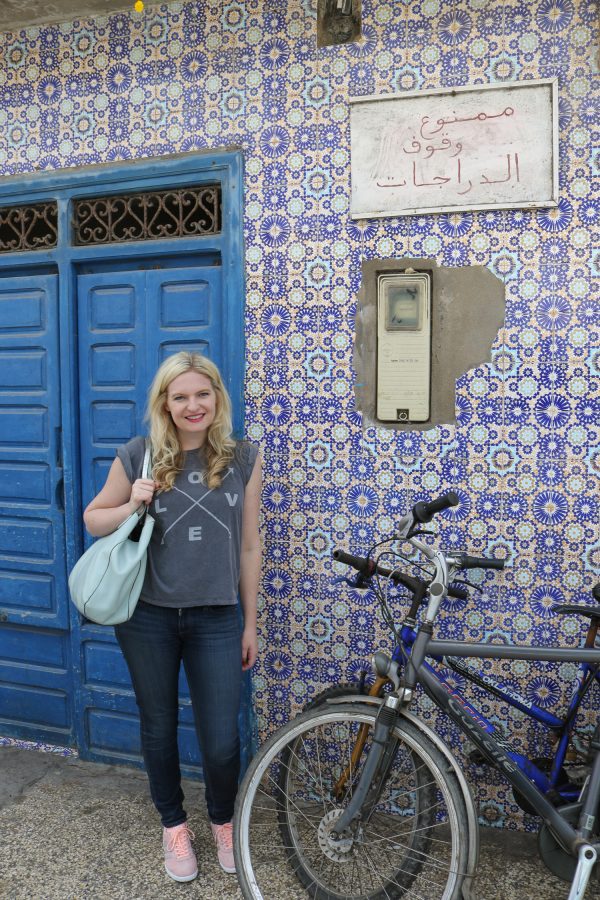 While in Essaouira we stayed at the Sofitel, but I would not recommend it. When we arrived we were told that my prepaid reservation had been canceled, and our room had an open shower without a shower curtain (it was so odd it is hard to describe), and the rooms didn’t have hair dryers or hangers. The grounds and the pool were lovely though. 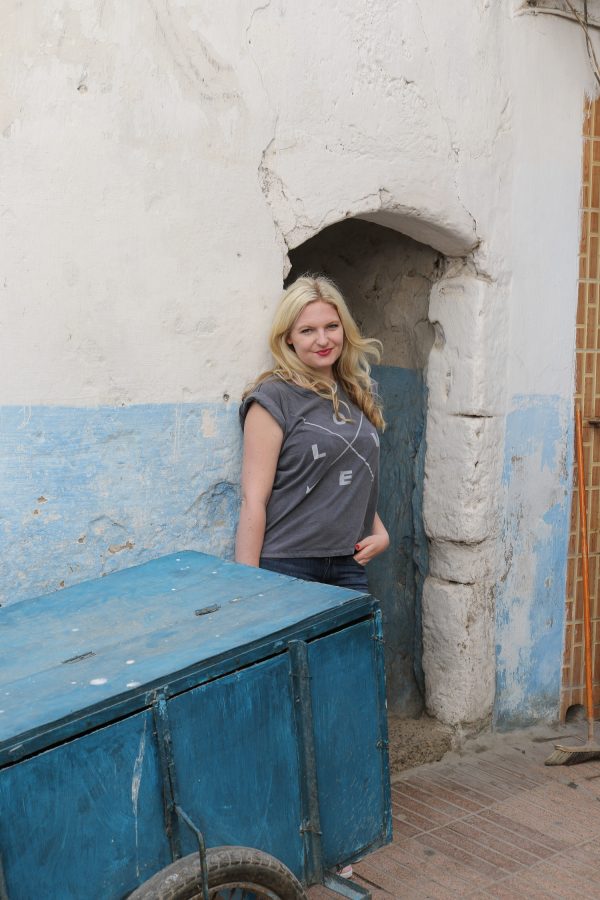 We were in Essaouira at the end of March, and the weather was warm and pleasant, but it wasn’t beach weather. We happened to be in town for the end of the Gazelle Rally, a women’s only car rally with participants from 30 countries. It was something that our desert guides had excitedly mentioned to us. The women drive through Morocco for days, without the use of GSP – just a map and a compass. The rally is not a race, the women who hits the check points while driving the fewest miles is the winner, not the person with the fastest time. The race takes the women through the mountains and desert. It was fun to see the women arriving in town proudly waving their country’s flags as the press took photos.

Have you been to Essaouira? What were your thoughts? Did you like it more than Marrakesh?