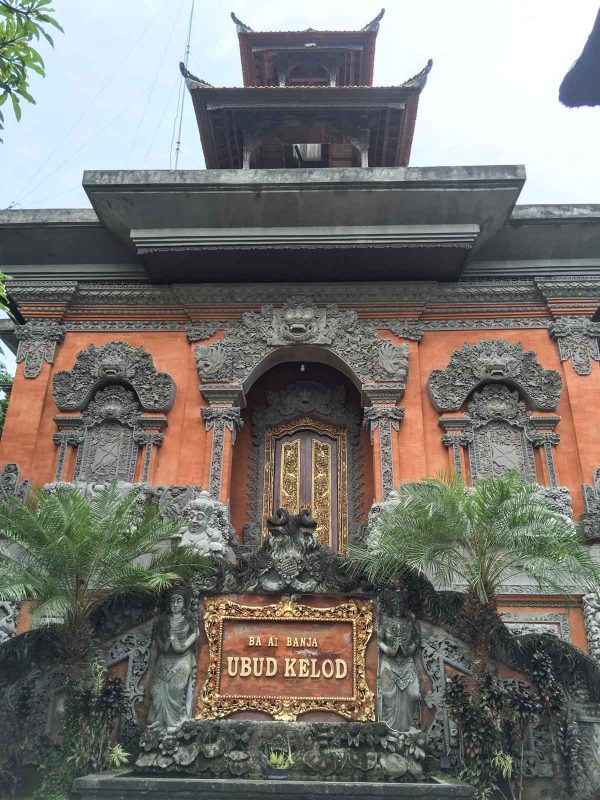 You probably think of Eat, Pray, Love when you think of Bali. But I think the book might have inspired so much tourism that the area is more touristy than you would expect. Don’t get me wrong – Bali is an enchanting place with beautiful beaches, fields of rice paddies, monkey-filled forests, and kind people. I will say that I thought the parts of our trip spent in Borobudur and Mount Bromo were better. Bali just didn’t seem like it was much of an adventure compared to our time visiting temples in the jungle and hiking up mountains.

The funny thing is that I took hundreds of photos in Borobudur and Mount Bromo and only a couple of dozen in Bali. Bali is the place to relax and unplug, which is exactly what I did. 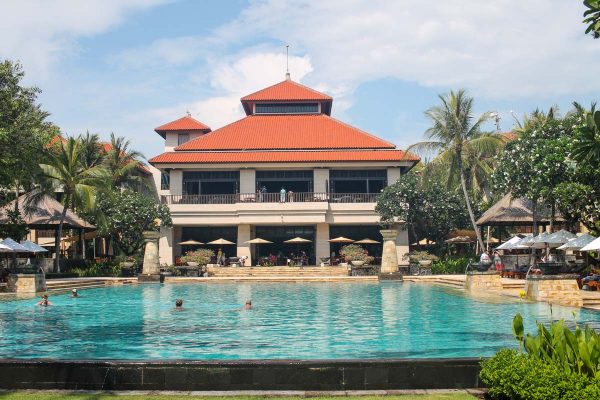 My sister and I took a domestic flight from Surabaya to Bali’s Denpasar airport (it took 45 minutes and cost about $100). While the other places we visited were a bit of a trek from the airports, it was a short ride from Denpasar to our first hotel, the Conrad. The Conrad is a massive resort hotel surrounded by lagoon pools. We liked it, but it lacked the charm and attention to detail of the smaller boutique hotels we usually stay at. 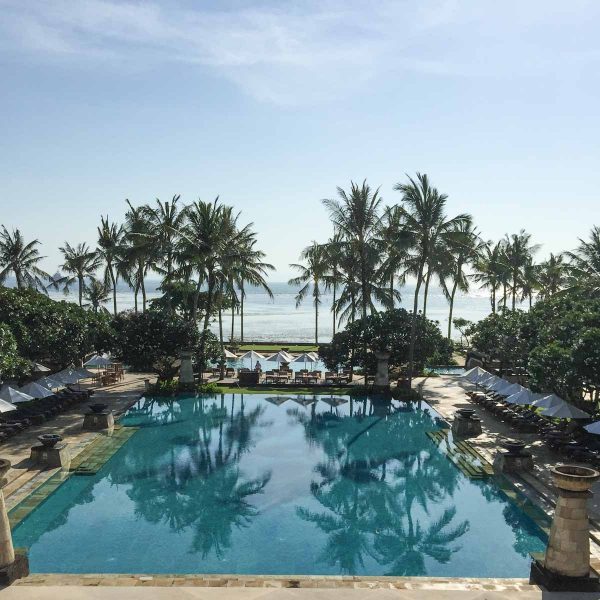 While staying at The Conrad we spent one day relaxing by the pool, and another day out exploring Ubud. Ubud is filled with really great shops, markets, restaurants, spas, and dozens of Hindu temples. 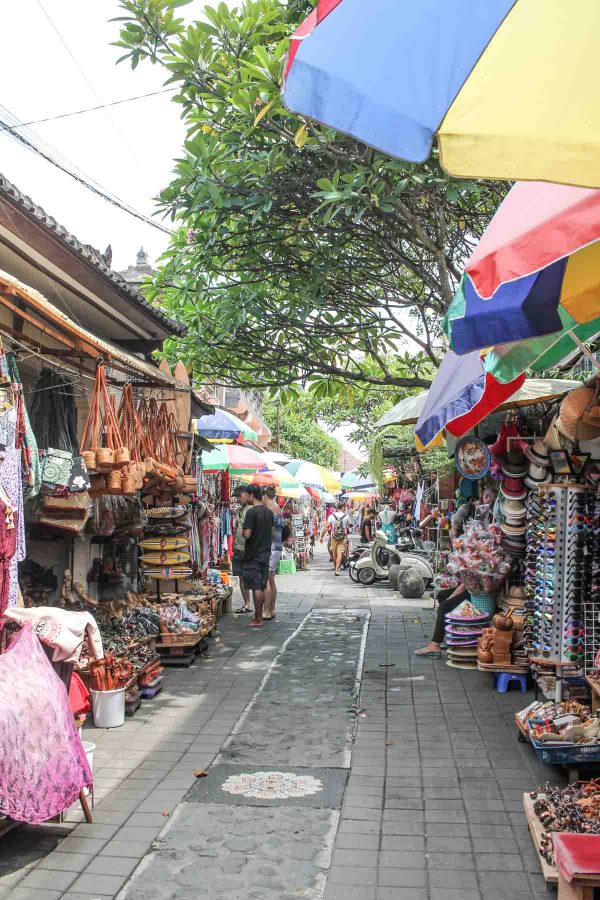 We absolutely loved the market and it was a perfect place to pick up gifts for our family. We bought beautiful silk robes, tee shirts, and absolutely gorgeous handmade quilts. 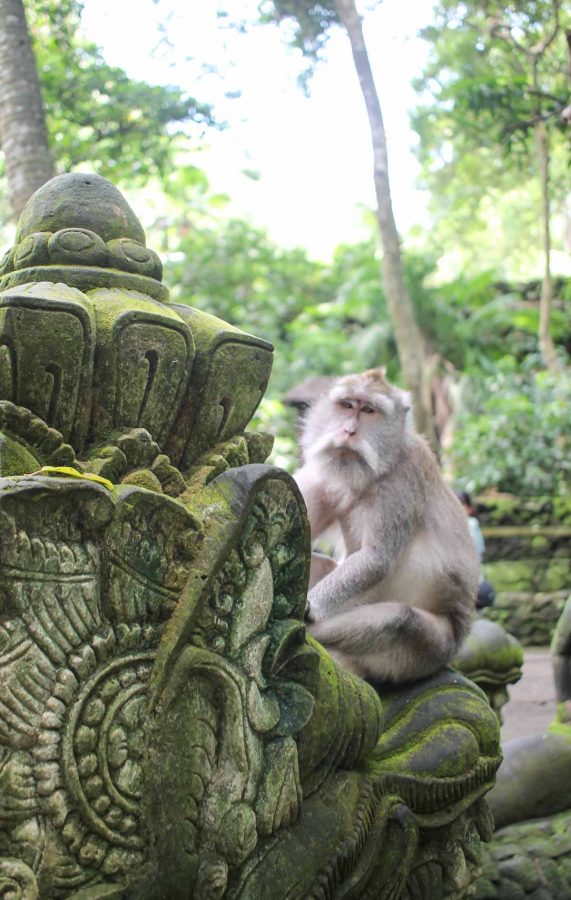 While in Ubud we stopped at the Monkey Forest where you can feed monkeys.

Kelly was daring enough to let them climb on her head! You can see in the video above – her facial expressions are priceless. 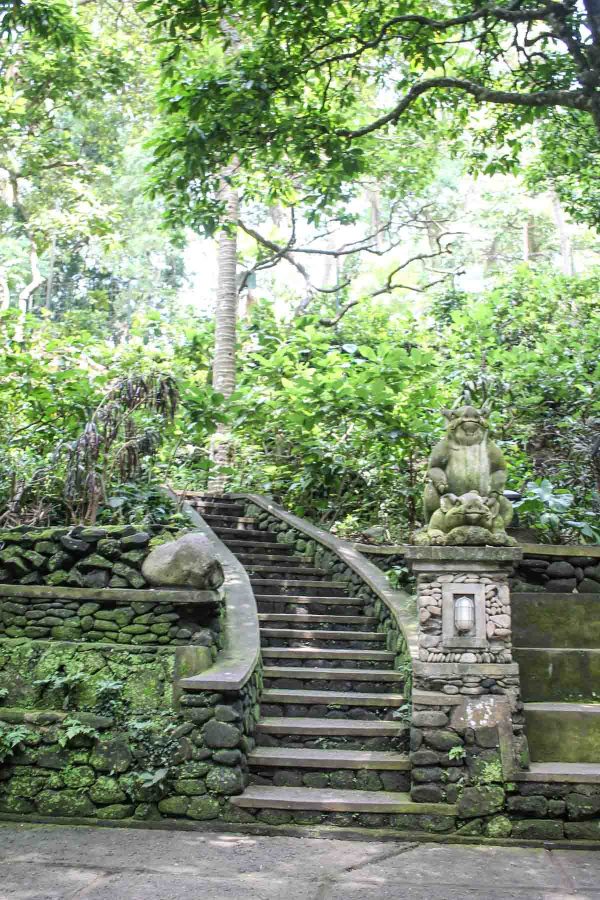 The monkey forest is both a nature preserve and a Hindu Temple so there was lots to explore. I thought all of the moss covered rocks made the forest look like something out of a fairytale. 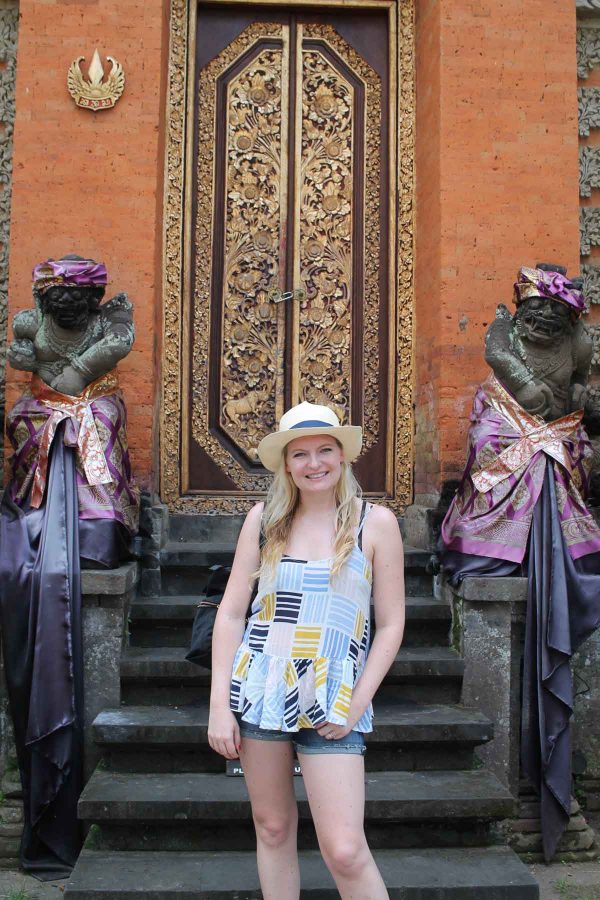 We went to Ubud Palace which is just beside the market, and local children were practicing dances in the square. 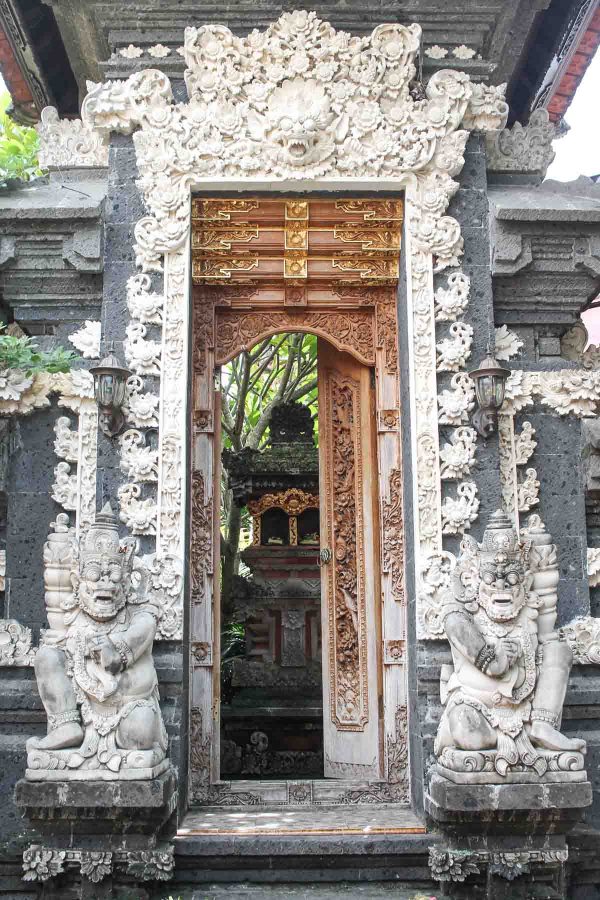 Then we walked through town discovering several Hindu Temples along the way. There are more temples than homes in Bali, so you can hardly walk for 2 minutes without seeing another temple. While Indonesia is a predominately Muslim country, Bali is mostly Hindu. 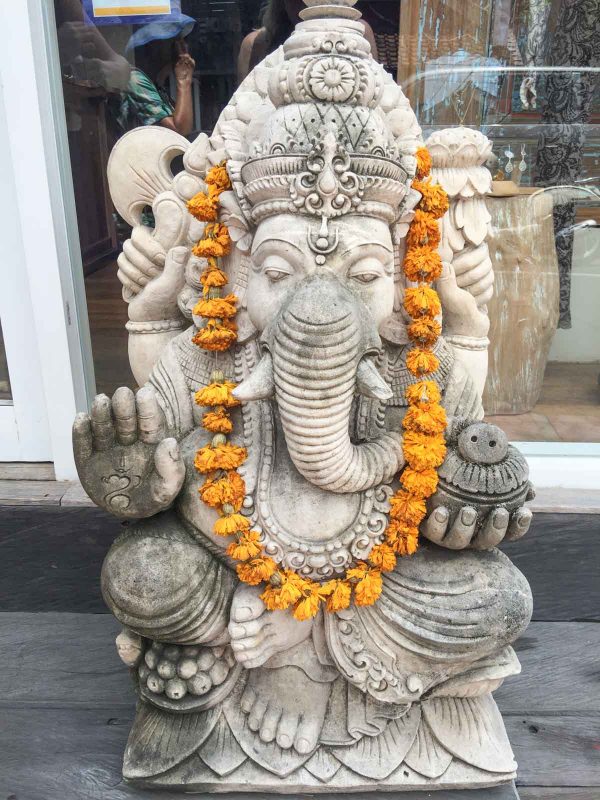 After two nights at the Conrad, we moved over to the Laguna, which is part of the Luxury Collection. While this was still a large hotel property, its atmosphere was calmer, quieter, more relaxing, and more upscale. 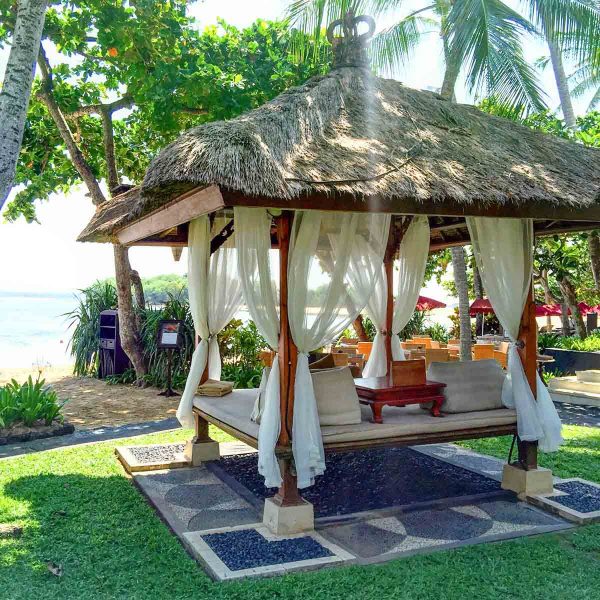 The best part about The Laguna was the cabanas. I don’t tan, I burn, so renting a covered cabana for about $15 USD was the perfect way to spend time outside without being directly in the sun. 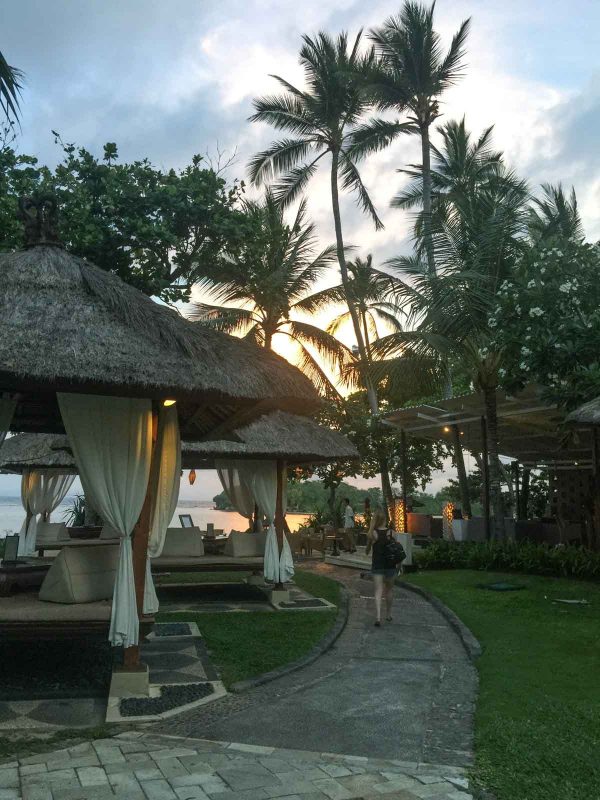 One of the things that we really liked about The Laguna is that it was in a little cove, and just outside all of the action. When we were at The Conrad there was a constant stream of load boats and watersports, it just wasn’t as relaxing as The Laguna. 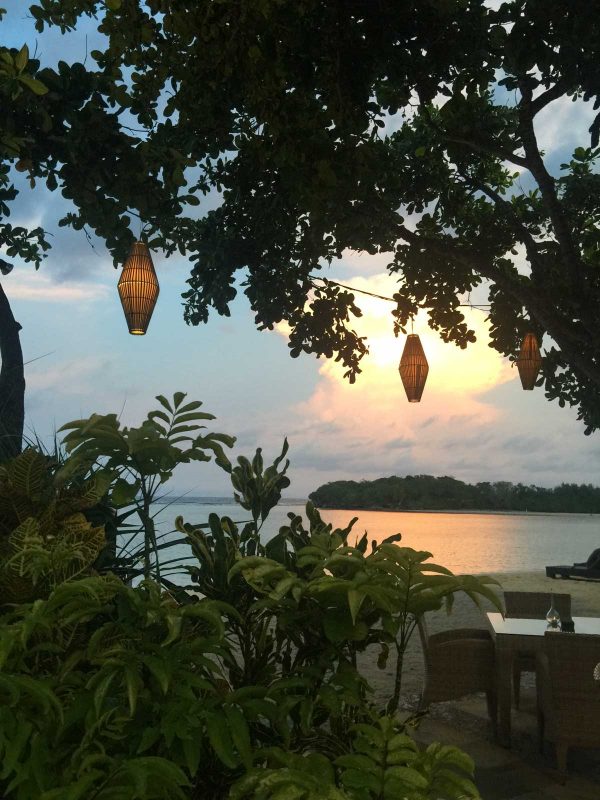 The sunset over the cove was magical. And as it got dark, fishermen who walked through the water with lights got to work, it was fun to watch.

My advice for someone traveling to Bali? Don’t just go to Bali. It was wonderful, but if you are in Indonesia, you should really go to Borobudur too! Also, Bali is not easy to get to – our trip from Bali to Maine to go home for Thanksgiving took 32 hours and 4 flights (we wanted more shorter flights instead of fewer super super long flights). But if you are making the trek from America to Indonesia, go for a least 2 weeks. Also, consider stopping in Toyko along the way – that was a smart move on my way to Indonesia.

Want to read more about Indonesia? Here are posts about our time in Borobudur and Mount Bromo.

This looks WONDERFUL and so relaxing! Love the videos. I does make me think a lot of Eat Pray Love but I'm sure as you say if you are adventurous you can find places away from all the tourists.

Yes, the key is to stay adventurous and avoid the touristy things :)

Great tips in this post! I am seriously considering going to Bali in May. But I'm thinking to go to Ubud for a few weeks, so it's good to see that there's things to do there. And yes, I just want to relax too :). I don't think I'd want to go to the Monkey Forest though! I'm not crazy about those little buggers anymore ever since one bit me!

Have a blast! Try to go to Borobudur too if you can!

I think you put it well when you said Bali is a good place to relax and unplug. Coming from Australia where going to Bali is the equivalent to going to Mexico for Texans, I had pretty low expectations when we went. I was pleasantly surprised though. We were able to stay in a private villa (found on AirBnB) for so cheap and the area we stayed in was extremely westernized but very nice. I would go back just to relax at the pool and get cheap massages haha. The monkey forest creeped me out though, I was so scared of them!

Yes. The analogy that Bali is Australia's Mexico is really fitting, but I think it is nicer than the touristy parts of Mexico.

Bali is one of my dream destinations!! Looks like an amazing trip and good flight deal for $100 :)

Thanks Sarah - that $100 flight was from another part of Indonesia though - just a heads up.

A friend of mine had her honeymoon in Bali, and she still can't stop raving about it, years later!

Bali would be an amazing honeymoon destination!