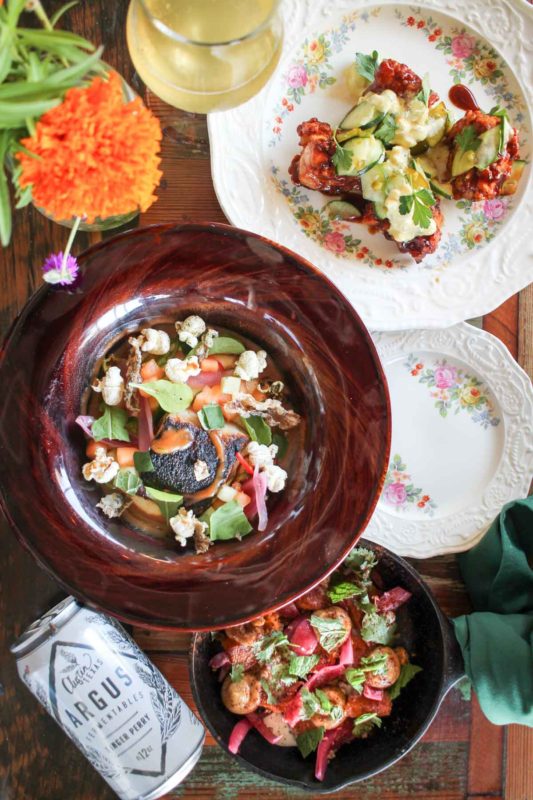 I had been looking for an excuse to go to Austin, and when the Blogher Food conference announced it was going to Austin in 2016 the stars aligned. I expected Austin to be similar to Nashville but with more emphasis on food than country music. While the conference was two days, I wanted to give myself more time to eat my way through Austin, so I decided to stay for five days. Jocelyn, one of my closest food loving friends came with me and provided carefully thought out restaurant plans. 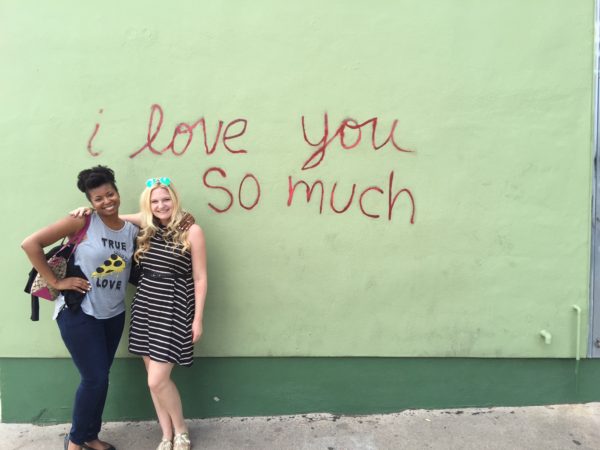 Austin is just a quick 2 ½ hour flight from Chicago, and the flights were cheap too. We chose to stay downtown at the Austin Hilton where we scored a discounted rate on the room during the conference. The conference was the same weekend as Austin City Limits, so other hotel rooms were expensive and hard to find. While the room wasn’t fancy, it had everything we needed (most importantly, a fridge to store rosé), and the central location was a good jumping off point for exploring 6th Street and Rainey Street both which were a short walk away. 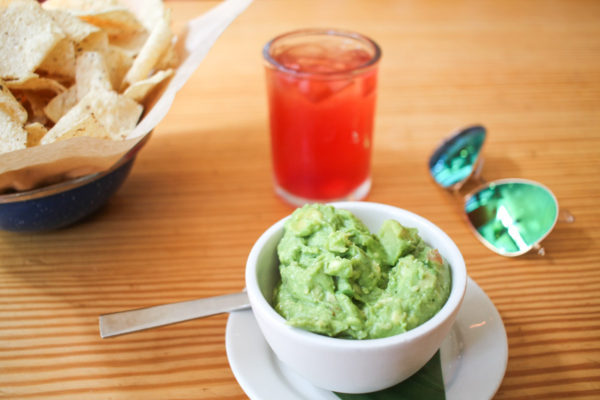 I arrived in Austin a few hours before Jocelyn and my first order of business was to eat tacos. This should not be a surprise. I found my way to La Condesa, a bright airy taco bar with an extensive mezcal list. Their guacamole was super simple and chunky and it came with extra thin and crispy chips. 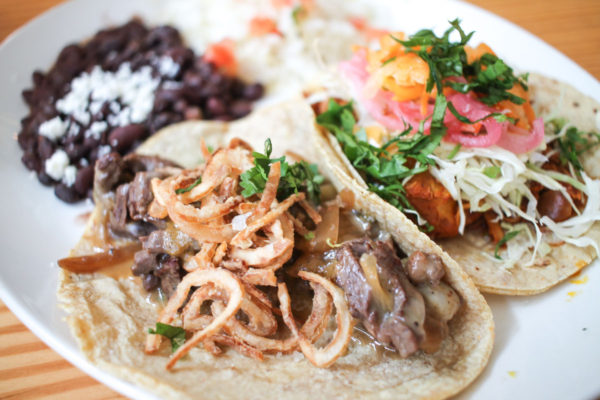 I loved the steak tacos which had both caramelized and fried onion. I also had the pork shoulder taco which was topped with pickled onions and spicy habaneros.

After lunch, I browsed through the boutiques along 2nd Street. I found a fun shirt that says “Time to Wine Down” at Austin Rocks. It obviously came home with me. Hemline was filled with women’s clothing with a boho-chic vibe. I found the coziest winter hat… and wondered if winter hats are ever really a necessity in Austin. Sikara & Co is a jewelry shop with a travel theme, each artisan is from a different city or country. I love finding unique locally owned shops when I travel; I get to support small businesses while picking up clothing that stands out from what the national retailers sell.

That night Jocelyn and I grabbed a reservation at Odd Duck, a restaurant that people had consistently mentioned recommended to both of us. We like to eat dinner early so that we can take photos in the natural light, and this also meant that we were just in time for happy hour. Several beers were just $2 and the appetizer plates were half off – definitely something to keep in mind if you plan to dine at Odd Duck. The menu is always changing, sometimes weekly, sometimes monthly based on what is seasonally available. This gives lots of room for creativity but not every dish was a winner – I definitely recommend the restaurant though. 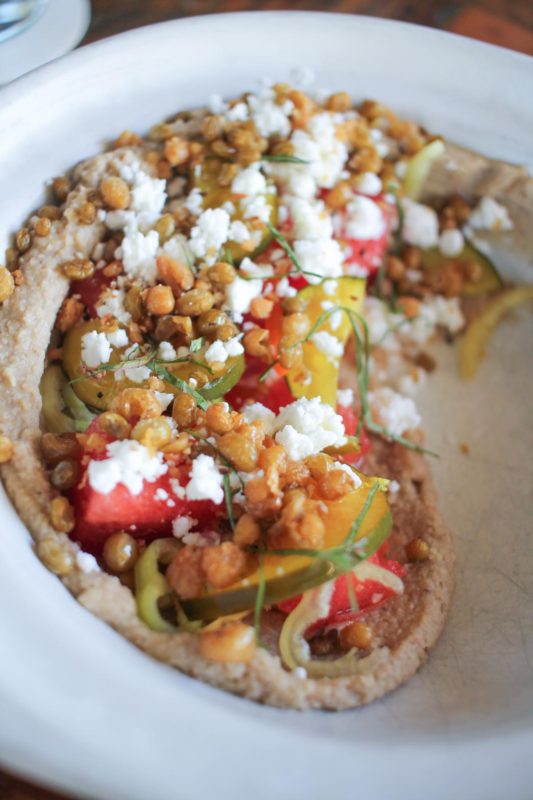 The field pea hummus with watermelon, goat cheese, and fried field peas was fresh and creative. I liked that it didn’t come with chips, instead we use a fork to pick up the watermelon and scooped up the hummus onto the watermelon. 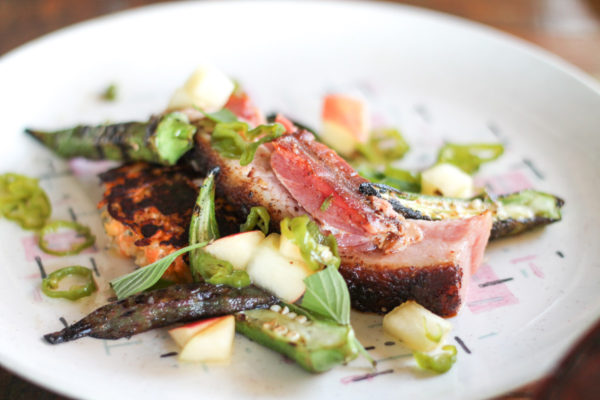 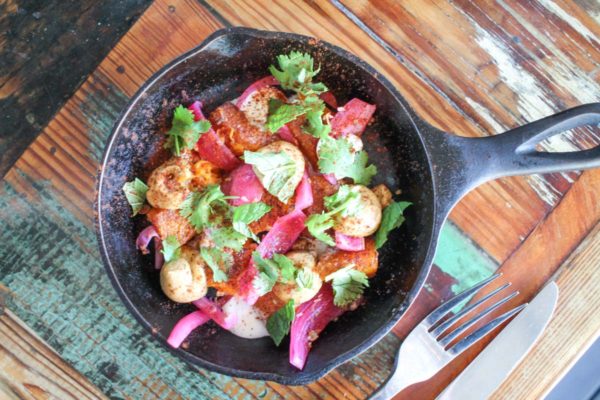 The butternut squash dish was just a touch too sweet, but I liked the flavor contrast of the pickled red onion, mint, and squash. 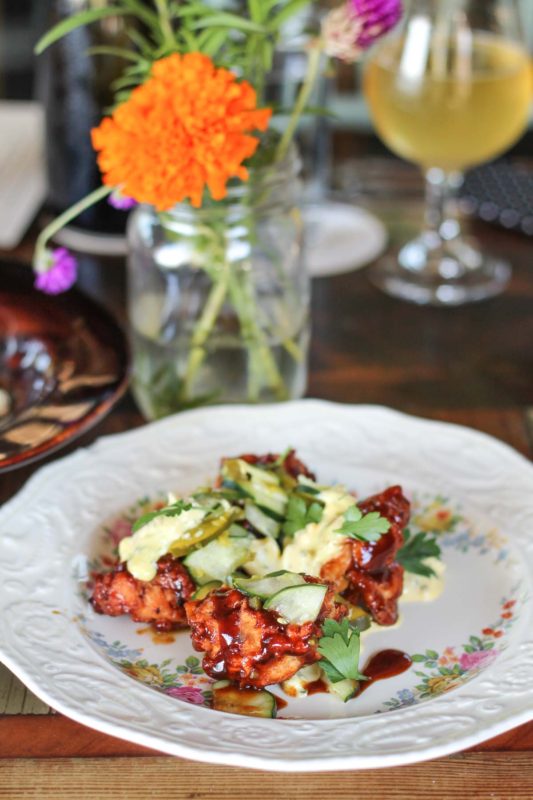 The fried chicken had a sweet and spicy glaze and was topped with egg salad and pickled zucchini. The creamy egg yolk in the egg salad added a whole new element to fried chicken.

When it was time to leave Odd Duck, we realized that we didn’t know how. You see, there is no Uber in Austin. Our waitress explained that a couple other ride-sharing companies are available in Austin, so we downloaded Fasten and were able to get a ride back to our hotel. 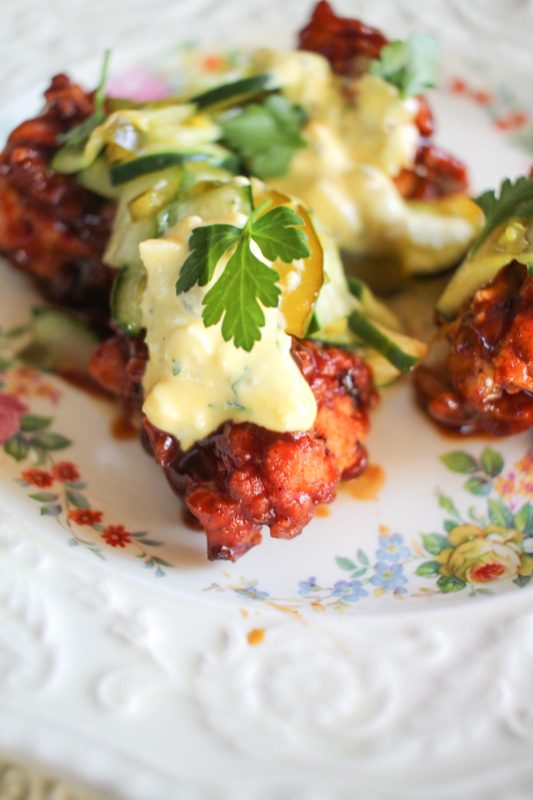 La Condesa and Odd Duck were a great introduction to the Austin dining scene. The following day we kicked things into high gear and created our own food crawl stopping at four very different restaurants. I’ll tell you about that next week.

Have you been to Austin? Do you have any favorite eateries? Share them in the comments – because I definitely plan to return to Austin ASAP!