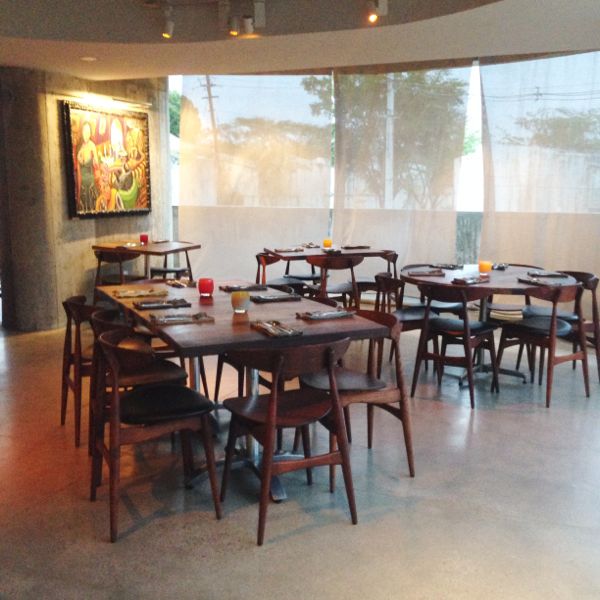 We spent 6 days in Puerto Rico, and discovered two restaurants worthy of their own blog posts. Overall, the food in Puerto Rico is quite good (far better than Belize) but two restaurants stood out from the crowd. Remember how we ended up at Santaella after we couldn’t get into Jose Enrique? Well, Jose Enrique just opened a hotel and restaurant in Vieques called El Blok.
The exterior of El Blok is concrete, and not exactly welcoming. We wouldn’t have known it was a restaurant if our cab driver hadn’t pointed it out. To find the restaurant, walk up the stairs, the second floor opens up to a large bar and restaurant. 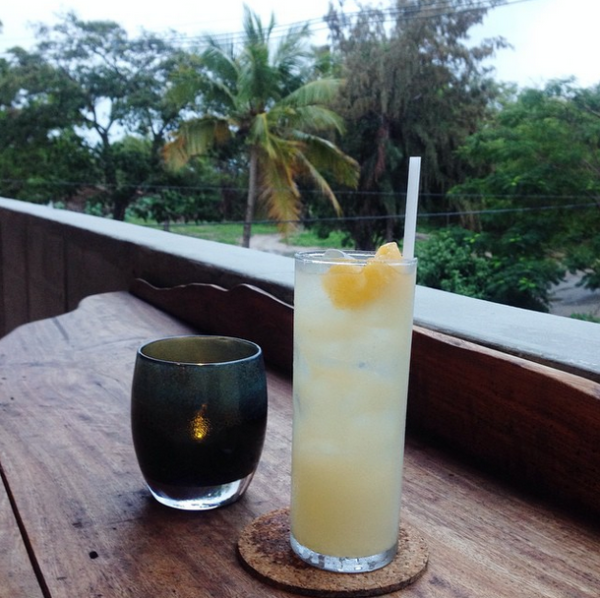 We visited the El Blok twice. The first time we visited after a lack luster meal at a nearby restaurant. We grabbed cocktails and chatted with the bartender, and ordered the churros. The cocktails were mostly gin based, adhering more to current trends than to local tradition. I had “The Champagne Thing” a fruity take on a French 75, while Charles had a coffee and anis cocktail inspired by a shot that is popular on the island. 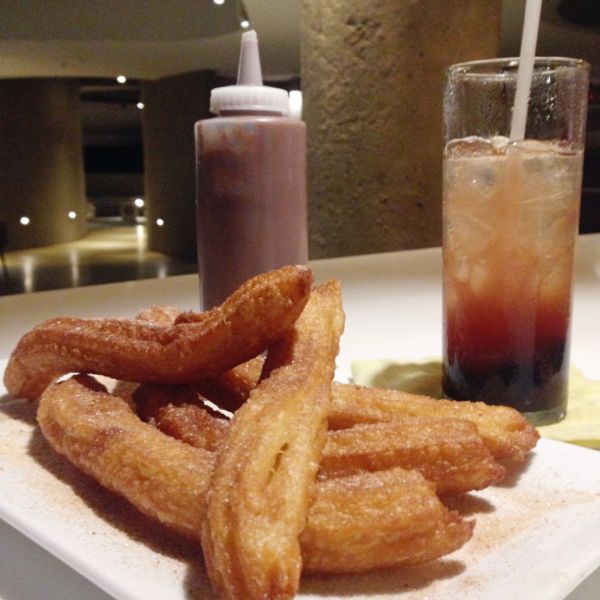 The portions in Puerto Rico tend to be large, and this was true of El Blok’s churros. The crunchy sugary pieces of fried dough were served with a trio of sauces, chocolate, duche de leche, and sweetened condensed milk, I was surprised that I liked the sweetened condensed milk the best. It was thick and creamy and sweet. The cocktails, churros, and friendly bar staff were enough to convince me to come back for a full meal.
Ee returned to El Blok the next night, it was a Saturday and we didn’t make reservations but there was plenty of room at the bar. We began our meal with a pair of appetizers. Charles ordered the Scotch Egg, the one dish on the menu that seemed to stick out, while I ordered an avocado salad. Although I thought that the Scotch Egg seemed out of place, it was delicious. The eggs was perfectly runny on the inside, breaded and fried on the outside, and served with a fresh warm tomato sauce. 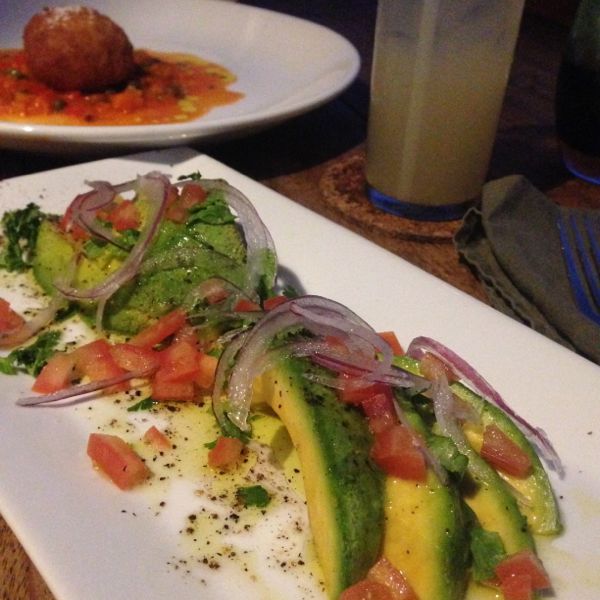 The Avocado Salad was very simply prepared. In the US, most of the avocados you see are Hass avocados, which are the result of cross breeding two other varieties of avocados. You see, the small flavorful avocados from Mexico were too delicate and they didn’t ship well, so they were cross bred with a less flavorful, but not so delicate avocado. Hass avocados are made to survive the trip to the grocery store, but they just aren’t as good as other varieties. This is why I jumped at the chance to have the avocado salad; I knew that the avocado would be worlds better than the stuff I can get in Chicago. I was right. The salad was made with beautifully tender Dominican avocados, and dressed with salt, pepper, citrus, very thinly sliced red pepper and tomato. It was a treat for someone who can’t get anything like that at home.
El Blok’s menu is small, but the list of specials is long. Charles and I both ordered specials. Charles had the Swordfish with Eggplant, and I ordered Breadfruit Gnocchi. The swordfish was good, but the eggplant was outstanding. It was diced, lightly fried, and tossed in a light sauce that started off sweet and ended with a touch of heat. The texture was perfect – something that can be difficult to achieve with eggplant; it was crisp on the outside and tender on the inside. We could have eaten a giant plate of it. 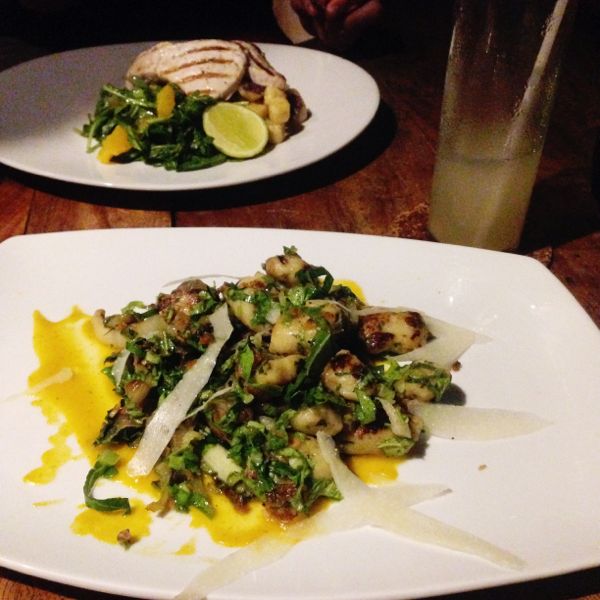 I ordered the gnocchi out of curiosity. I had ordered cassava gnocchi at another restaurant the night before, but it wasn’t very good. Cassava is a locally grown root vegetable that looks similar to a carrot and tastes like a potato. The dish sounded promising, but the cassava lacked the light pillowy texture of good gnocchi. I knew that El Blok was a superior restaurant, and I wanted to see if they could successfully make gnocchi with local ingredients. They knocked it out of the park.
Breadfruit is a tree fruit that grows in Vieques. It is about the same size of a cantaloupe, and it sweetens as it ripens. At El Blok, the breadfruit was wood fire roasted and then used to make gnocchi. The gnocchi itself had the perfect texture and mouthfeel, it wasn’t dry in the center like the cassava gnocchi, instead it was soft and moist. It was served with caramelized onions, and shaved pecorino. El Blok excels at simple preparations that let the local ingredients shine, something I truly appreciated after trying some unnecessarily complicated dishes elsewhere. 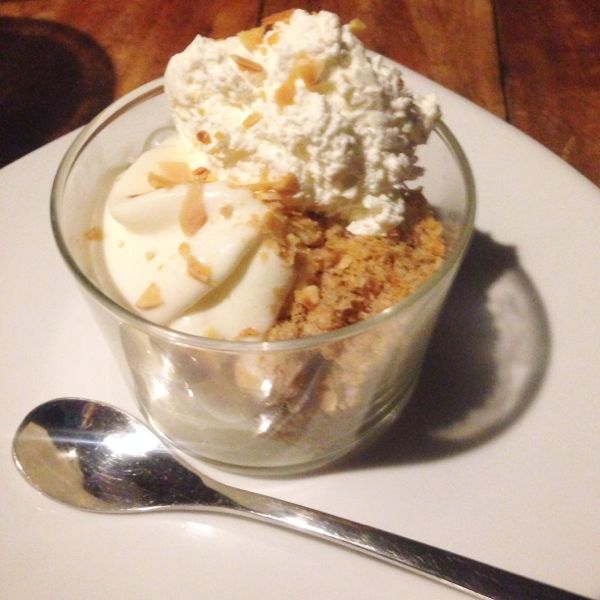 For dessert we had the whipped key lime, a deconstructed key lime pie served with pulverized toasted almonds that replicated the crust, a refreshing whipped key lime pudding, and whipped cream. Charles very rarely even eats a bite of dessert, but he ate half of this- he loved it. The key lime was sweet and tart and the almond crumbs added a bit of crunch.
El Blok is in Esperanza, and it is the first in the line of restaurants along the boardwalk. After dinner you could work your way down the row of restaurants sipping cocktails, but we opted for an adventure and went kayaking in the bioluminescent bay. It was our favorite night of the trip, a splendid meal followed by the magical experience of kayaking through glowing water under the stars.
El Blok does accept reservations, and they are even on Open Table. El Blok is located at 158 Calle Flamboyan.
This is my final post about Puerto Rico. We explored Old San Juan, dined at Santaella, and explored Vieques. We had an incredible time. Huge thanks to Erin, Emily, Kelly, and Spoon Food Tours for all of the thoughful and helpful recommendations.