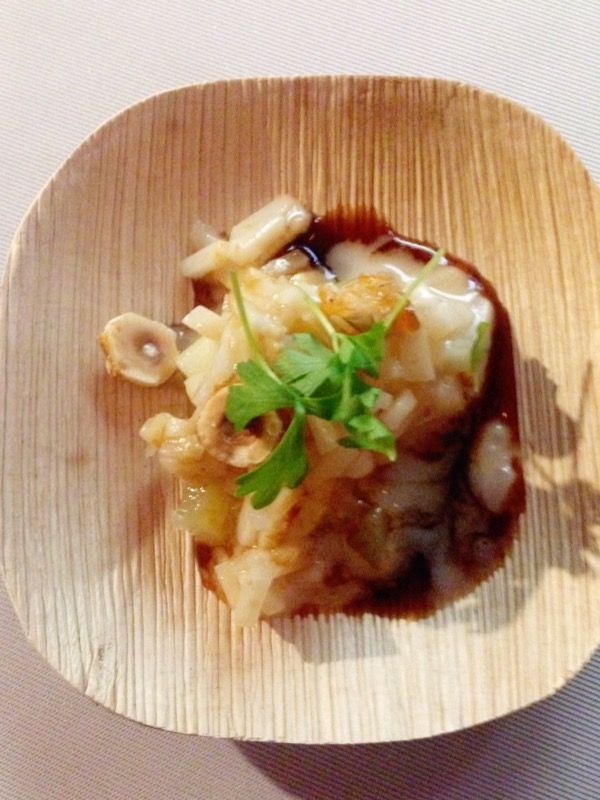 Let’s take a closer look at one of the twenty-seven dishes prepared for the James Beard Foundation Awards earlier this month. On the day of the awards, I had the chance to visit with Chef David Posey, a finalist for the Rising Star Chef Award in 2014, as he prepared his Celery Root Risotto to be served at the awards that evening. I met Chef Posey in his former kitchen at Blackbird, where he incredibly cooly and calmly prepared his dish on a massive scale to be served at “the Oscars of food”. Chef Posey shared the backstory of how his unique version of risotto came to be, and how it became a part of the 2015 James Beard Awards.

What inspired this dish, and can you tell us about how you are using celery root instead of rice to make risotto?

This is a hybrid of two dishes. One is a dish that I had while I was on vacation with my wife in Paris. It was one of the worst dishes I have ever had in my life, at a very expensive three star restaurant, called Celery Root Risotto, and it did not remind me of risotto at all so that stuck with me. At the same time, a cookbook came out where they were doing risotto with a rice stock and some vegetables. I melded the two ideas together and it turned into this. The base was the same and Heinz [Chef Heinz Beck of the Waldorf Astoria Rome] and I figured the we could riff on the Waldorf Salad since that is already a classic. The celery root was on the menu when I was a chef here, and I presented the idea to Heinz and he liked it but wanted to tweak some techniques. He showed me to start the celery root in wine to give it a nice acid, then once it is soft we add a rice stock that we make with just some rice, celery, and onions. It comes together and it is really creamy. We finish it with a little butter and Parmesan, like a traditional risotto. It’s creamy, it is a little healthier, a little lighter.

Does it cook more quickly than risotto made with rice. Do you add broth once or multiple times?

Yes. It is just one addition of broth. We get this to where it is just underdone and then we will boil some of the rice stock and add it until it is tender and then add butter. 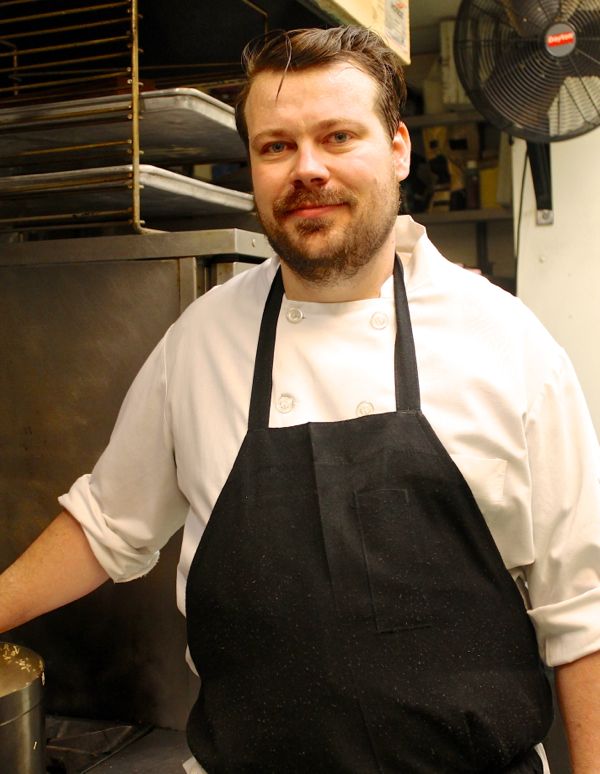 How much are you making for tonight?

So your arms are tired.

I have calluses, but the chopping goes fast. You zone out and think about other stuff.

Are you excited to see old friends tonight?

Yes! This weekend has already been crazy. So many friends are in town.

Can you tell me more about Taste of Waldorf?

Taste of Waldorf is the program that they reached out to all the long listed Rising Star Nominees last year. [It was created by the Waldorf Astoria in partnership with the James Beard Foundation]. We had to write an essay and five people were chosen and assigned restaurants [at Waldorf Astoria properties around the world]. I was lucky enough to go to Rome for a few days with Heinz. The other people went to Berlin. Shanghai, Edinburgh, and La Quinta, California.

We all came up with dishes with our respective chefs and presented them in New York and judges voted on them, and this was winner.

I was a little bummed when I won because I knew what was coming – cooking for two thousand people at the James Beard Awards. [Laughs]

Cooking for two thousand people probably isn’t something you will do often in your career.

It’s rare. I have done big events, but this one is a mega-event.

I don’t want to stress you out, but the pressure must be on because you are cooking for your colleagues.

Yes, it is all people whose cookbooks I have. Thomas Keller is going to be there and he is god to me. The first time I went to the awards I was in culinary school and I was volunteering, and I saw Thomas Keller talking to Alain Ducasse and Jacques Pepin, and those are my three top chefs.

Now that I actually get to cook there representing myself, it is unreal.

Do you have any favorite Chicago restaurants other than Blackbird?

We don’t eat at fancy restaurants that often. We just had a phenomenal meal a Lula Cafe and every time I go there I am blown away. We go to Pho on Argyle Street and Dum Sum in Chinatown.

What’s next for you? Another restaurant in Chicago?

Yes! We are looking at a building nothing is finalized yet.

If you missed Chef Posey’s Celery Root Risotto at the James Beard Awards, it is available at all twenty-six Waldorf properties worldwide.

I had a great time seeing the action both behind the scenes and at the awards themselves. The celery root risotto did successfully mimic the tastes of textures of traditional risotto but with a lighter final product. It is a great example of the creativity that the chefs’ displayed at the James Beard Award Reception.