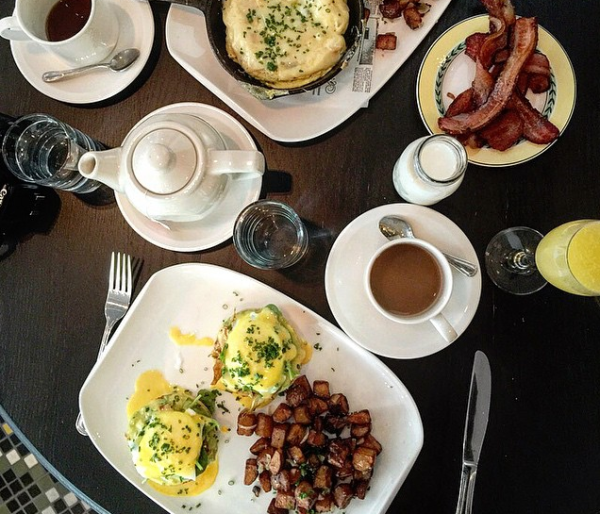 Weekend brunch in the Loop sounds a little crazy to Chicago’s locals, but trust me, Cochon Volant is worth checking out. The new French inspired eatery is bright and full of light, has side walk seating, and doesn’t feel the least bit like a hotel restaurant – even though it is connected to the Hyatt. Charles and I recently had brunch at Cochon Volant, and I was so impressed that I returned for lunch a couple of weeks later. 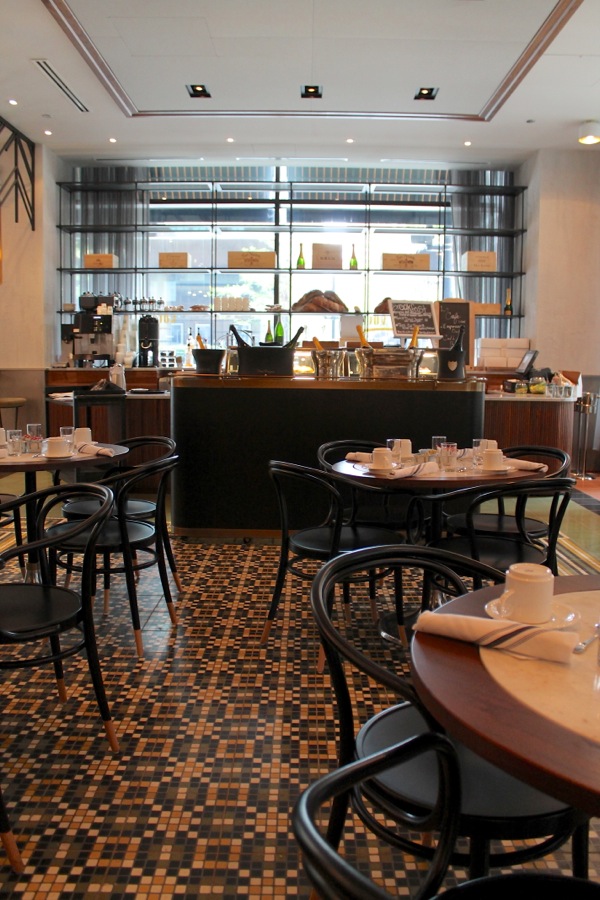 The brunch menu at Cochon Volant has all the classics you expect – omelets, pancakes, benedicts, and waffles, with a French twist. The menu is big enough that there is something for everyone, and I enjoyed that there were multiple varieties of omelets, pancakes, benedicts, and waffles on the menu. It seems like so many brunch places have condensed their menus to the point where they only have one option for each. 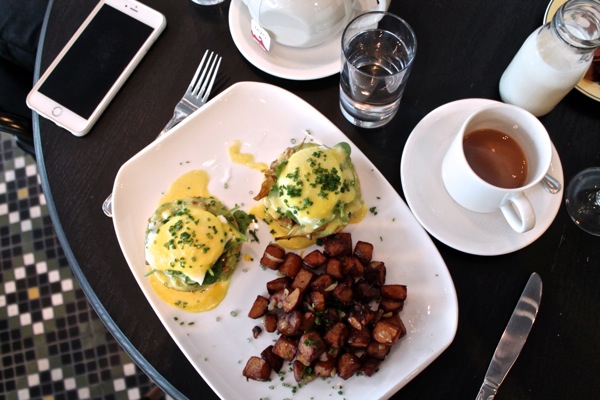 I ordered the Super Green Benedict. Avocado, spinach, crispy artichokes, and poached eggs were piled on house made english muffins and drown in hollandaise. Delightfully flavorful and crisp potatoes were served on the side. This is a vegetarian brunch that is still hearty. I want brunch to keep me full through lunch, and this did the trick. 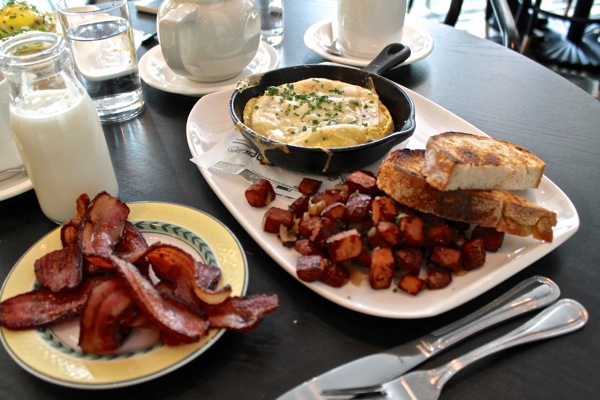 Charles opted for the Wild Mushroom-Kale-Gruyere Omelette, which was wonderfully fluffy. I never order omelettes at restaurants, but this might have changed my mind. It was far superior to other omelettes due to the fluffy texture and generous use of cheese.

When I returned to Cochon Volant a couple of weeks later, I had an aggressive amount of food. 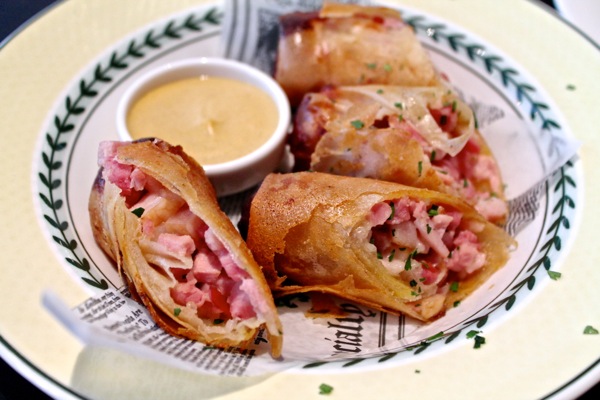 We started with the Croque Madame Eggrolls. Cochon Volant has transformed the classic French sandwich into a fun and irresistible appetizer. Diced ham and cheese in wrapped up in an eggroll and served with spicy mustard. I might be inspired to try making these at home. 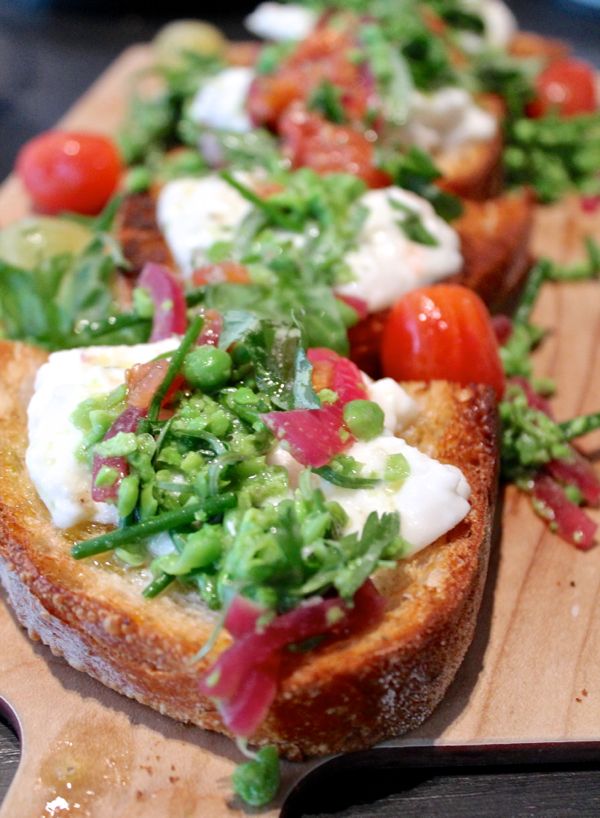 The Burrata and Toast is made with freshly baked bread and ingredients picked up at the Green City Farmers Market. Toasted bread was topped with creamy burrata, fresh mashed peas, picked onion, and tomatoes. This simply prepared started let the fresh local ingredients shine, and it just tasted like summertime. 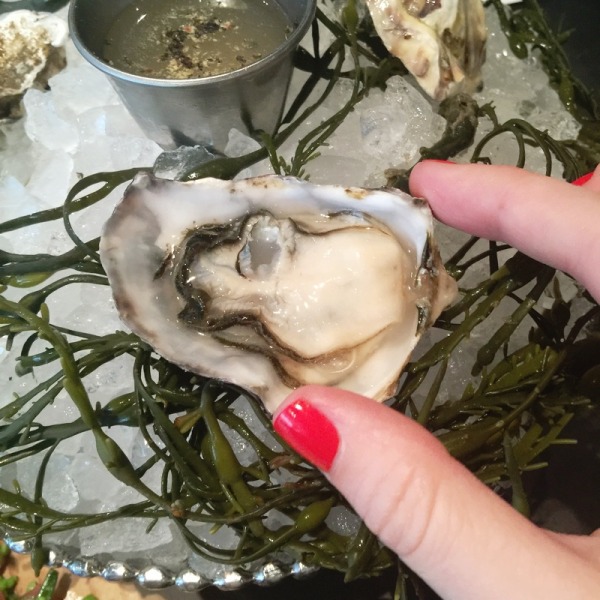 Then Chef Matt brought out oysters that were flown in from New Zealand that day. These oysters make it from the ocean to the restaurant in just 18 hours. Cochon Volant opts for these oysters instead of East or West Coast American oysters since the colder water temperatures in New Zealand (since it is winter there) result in more flavorful oyster with a perfect balance of creaminess and brininess from the ocean. 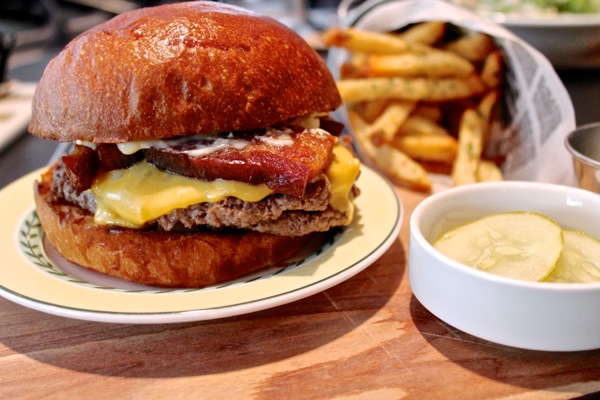 I had heard rumblings that the Cochon Volant burger is comparable to the Au Cheval burger – minus the 90 minute wait. Now those are bold words. Le Cheeseburger Royale, which also appears on the brunch menu, has made with two thin patties of prime dry aged beef, crispy super thick bacon, confit onion, American cheese, dijonnaise, and pickles on a brioche bun, served with seasoned fries. The verdict? This is one of the top 5 burgers in Chicago, and the comparison to Au Cheval is well deserved. It is everything you want a burger to be, meaty and cheesy, with a crispiness from the bacon, and a burst of flavor from the dijonnaise and onions. 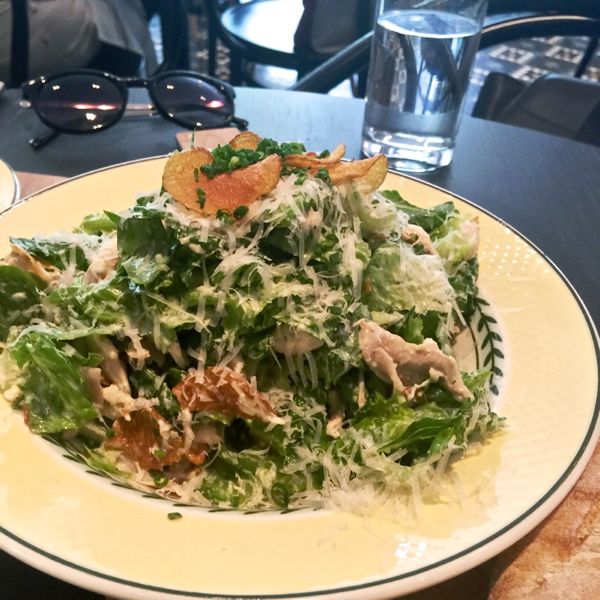 I also tried the Rotisserie Chicken Caesar, certainly one of the most popular items at the restaurant since over half of the tables around me ordered it. This twist on a Caesar Salad has crunchy potato chips instead of croutons, but the star of this salad is the remarkably tender chicken that practically melted in my mouth. 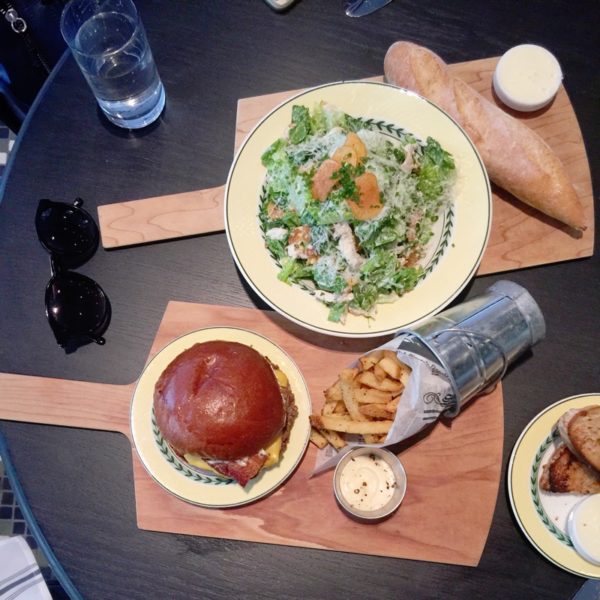 Cochon Volant‘s address is 100 West Monroe Street, in Chicago’s Loop. They do accept reservations. As word gets out about this place, I expect that reservations might be hard to come by in the future, so head over there ASAP!