These Baked Jalapeño Poppers are seriously addictive. I ate at least 8 of them as soon as I finished taking photos. I kept going back for more, which is the sign of a good appetizer. These poppers have just the right balance of spice and cheese with extra flavor thanks to some bacon and garlic powder.

One of the challenges in making Baked Jalapeño Poppers is getting the breading to be as crispy as it would be if you fried the jalapeño poppers. I came up with a two part solution.

First I used panko which is bigger and crispier than breadcrumbs. And secondly, I added some crispy bacon. I loved the additional flavor and crunch from the bacon, but you could leave it out if you want.

The cheese filling is made with a mixture of cream cheese, cheddar, and monterery jack and is seasoned with some garlic powder. I love the burst of flavor that the garlic powder gives the jalapeño poppers. If you wanted to add a little extra spice to this recipe you could use pepper jack cheese instead of monterrey jack. You could even add a little hot sauce to the cheese mixture.

You can serve the Baked Jalapeño Poppers on their own, or with a side of ranch dressing for dipping. You may know that I am obsessed with homemade ranch dressing, and dipping the poppers in ranch is a way to tone down the spice level. 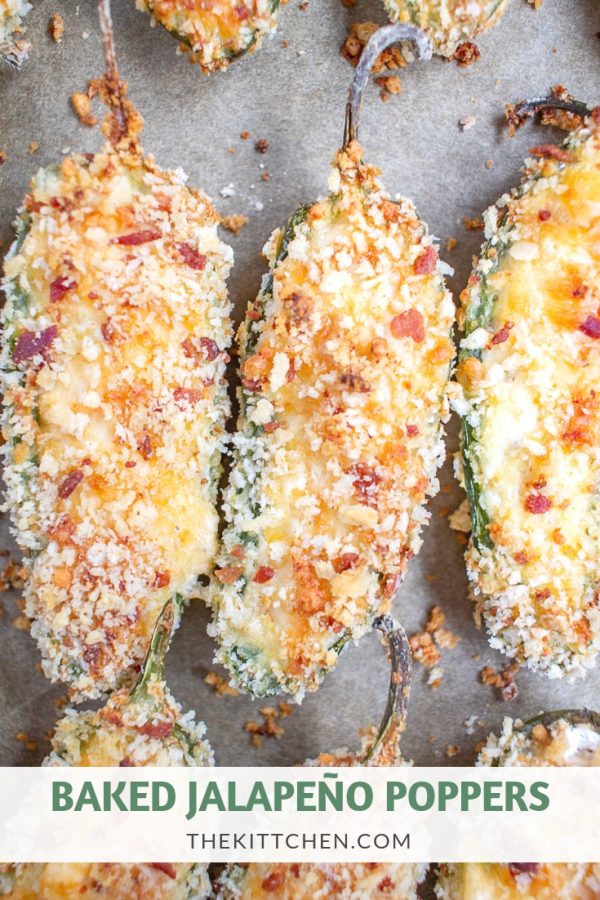 How to make Baked Jalapeño Poppers:

You can serve the Baked Jalapeño Poppers on their own, or with a side of ranch dressing for dipping.