A three day itinerary for a weekend in Winnipeg. Winnipeg is a quick trip from Midwestern cities, it’s affordable, and it’s filled with fun things to do. It’s just the place to go on a long weekend. 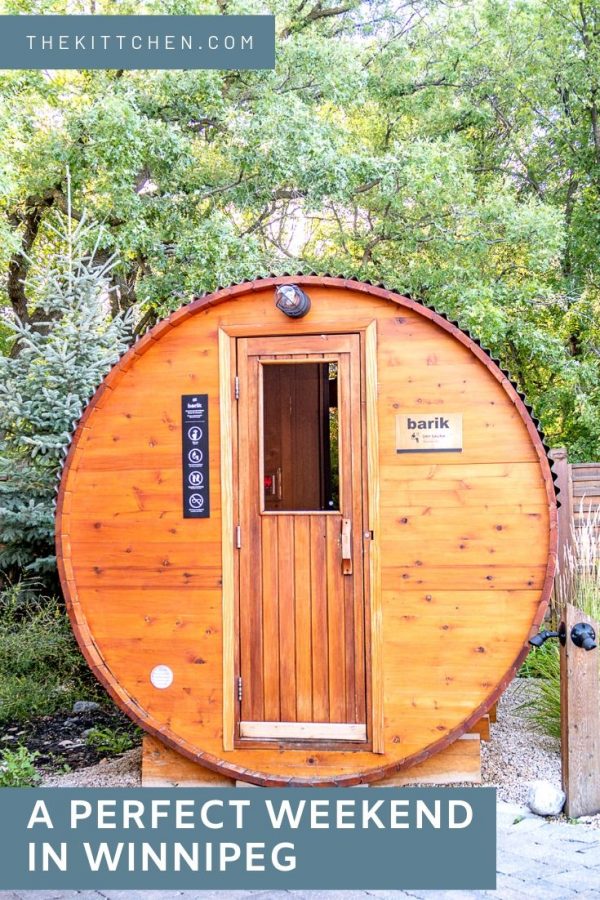 There are direct flights from Chicago to Winnipeg on United, and the flight time is just under 2 hours. It’s quick and easy. One of the most convincing arguments for a weekend in Winnipeg is the exchange rate. The exchange rate has been pretty consistent and $1 US is equivalent to $1.33 Canadian. So for Americans, it is like Canada is on sale. Our money goes further, which makes Winnipeg a more affordable destination than many cities in the United States. 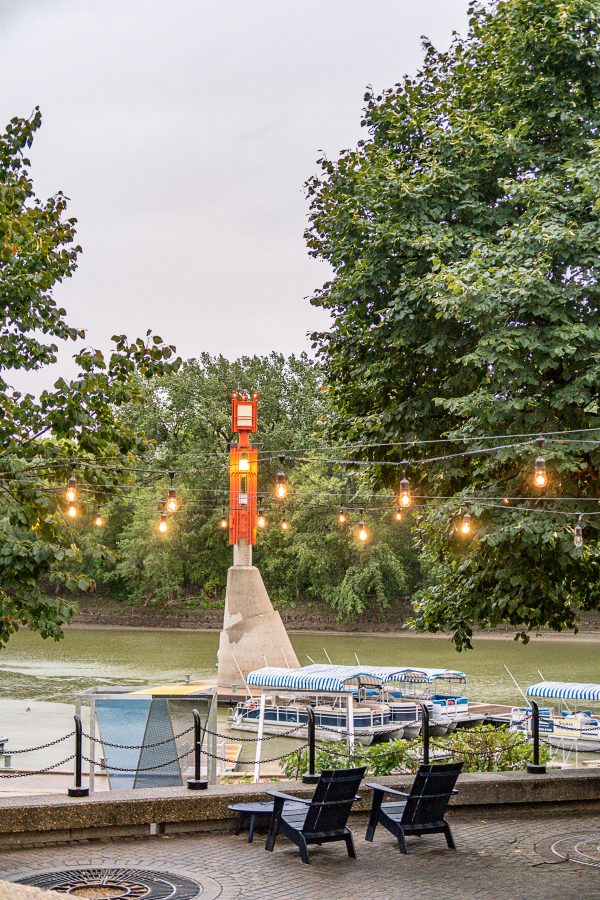 Not only is Winnipeg easy to get to and affordable, there is so much to do! There is a wonderful food culture, beautiful architecture, local breweries, and one of the best spas that I have ever experienced. Oh, and if you are into hockey, go when the Winnipeg Jets host the Blackhawks. And… Elton John’s farewell tour is stopping in Winnipeg for two nights in October and he isn’t coming back to Chicago.

I spent five nights in Winnipeg and I have pulled the best of the best into this Winnipeg weekend itinerary. 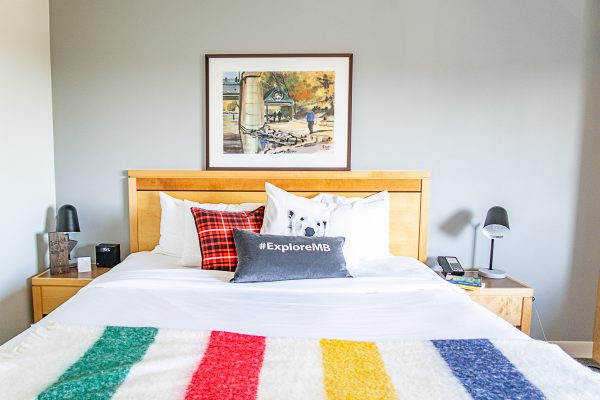 Arrive at Inn at the Forks

This well located hotel puts you right next to The Forks Market, a dining and shopping hall, and within walking distance to Downtown and the Exchange District. 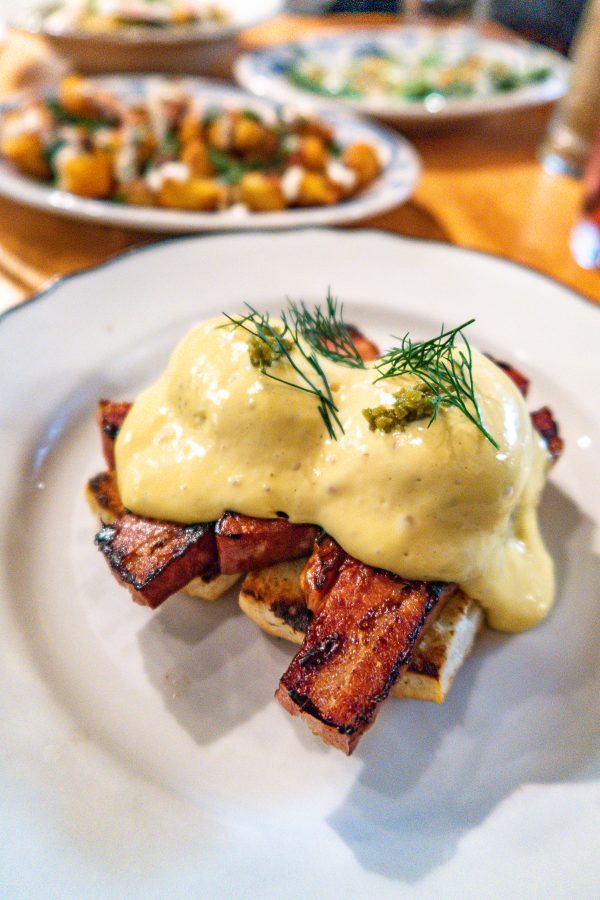 If you arrive in time for lunch, go to Clementine which is a beloved brunch spot. The menu has items like a Braised Bacon Benedict with brown butter hollandaise and and Chicken Chiliquiles Verde topped with a avocado and a fried egg. They don’t accept reservations, but I expereinced a very short wait on a weekday (they are open everyday). 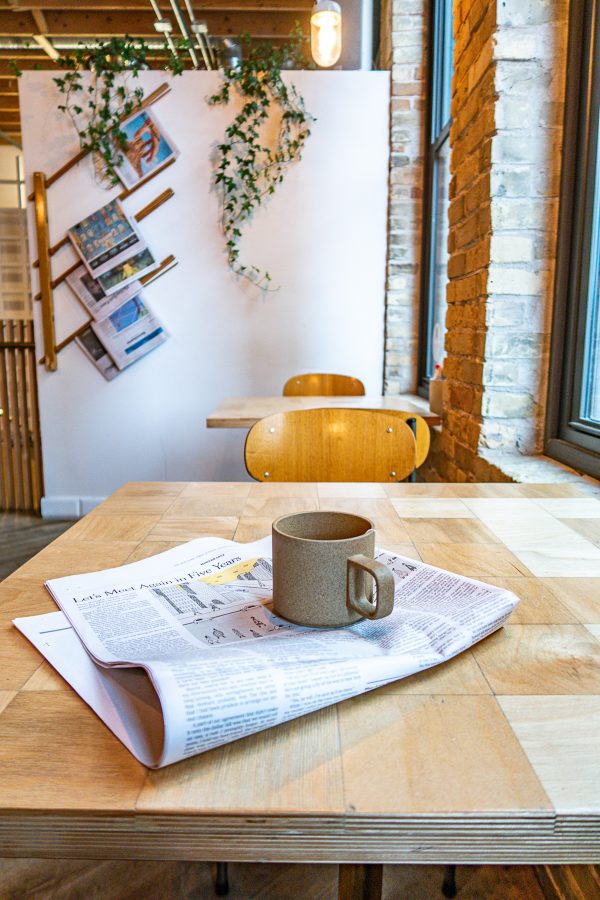 For a quick pick me up, make the short walk to Forth for a coffee. There is also a cocktail bar on the rooftop if you want to go back after 4pm.

(Note: Clementine are a short detour from The Forks to the Exchange District but it is still walkable). 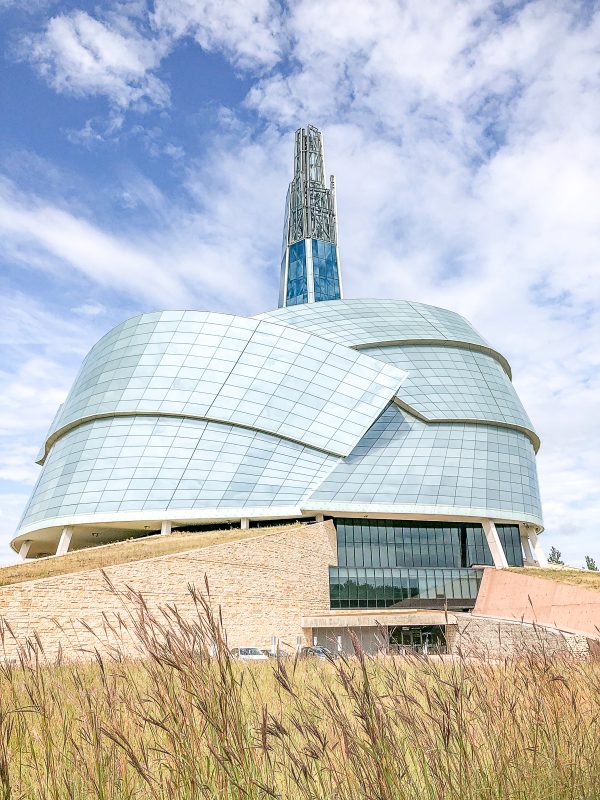 This national museum is a very quick walk from the Inn at the Forks, and is the only museum devoted solely to human rights. The architecture of the museum is remarkable. The exterior of the building was made to resemble dove’s wings. A large tower, called the Tower of Hope, rises out of the wings. The tower appears unfinished since the work of human rights is never complete. 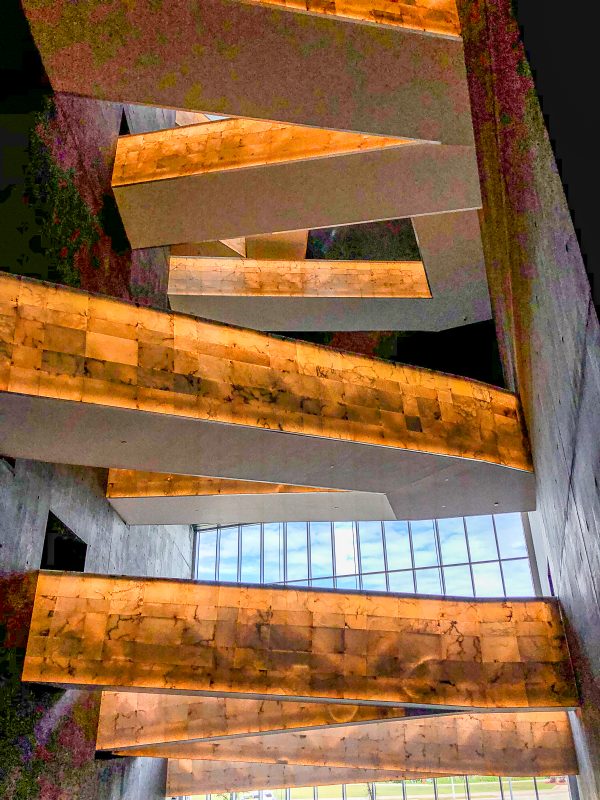 Once inside, exhibits examine the struggle for human rights throughout history. Spaces are devoted to topics like the history of human rights in Canada, the Holocaust, and turning points for humanity. Your visit to the museum ends with walking to the top of the Tower of Hope and admiring the view of Winnipeg. 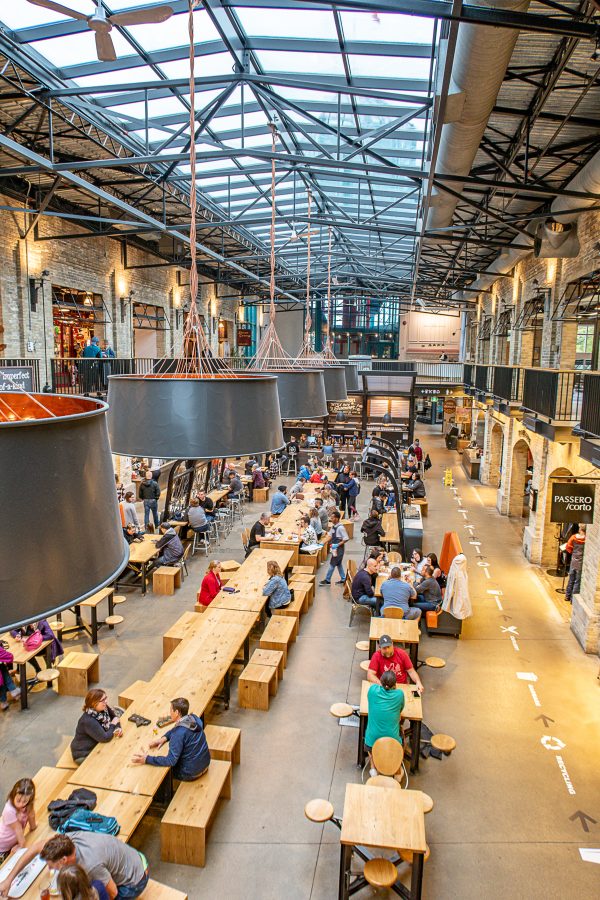 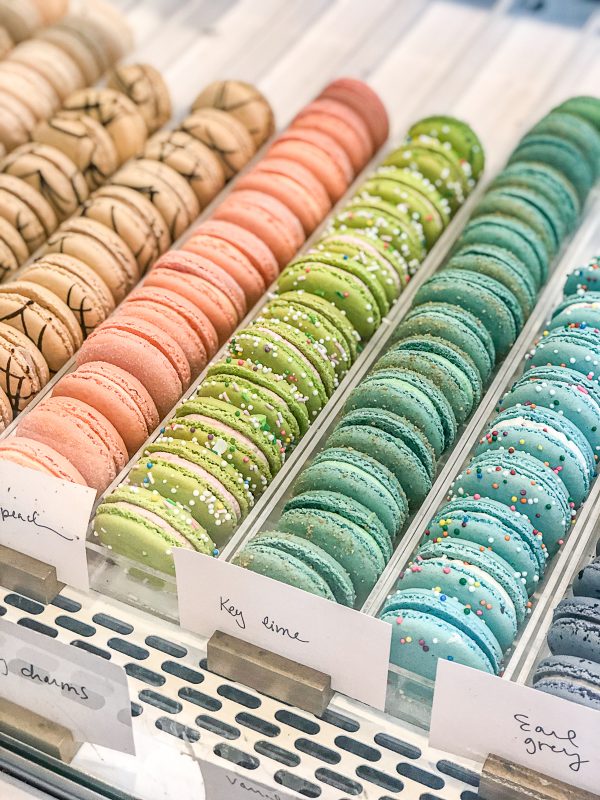 Play pinball at Phantom Amusement Arcade, try a sweet treat at Jenna Rae Cakes, have a drink at The Commons, and shop at Forks Trading Company. Depending on what time you arrive, you might want to put your name it at Passero (located on the ground floor) before exploring. 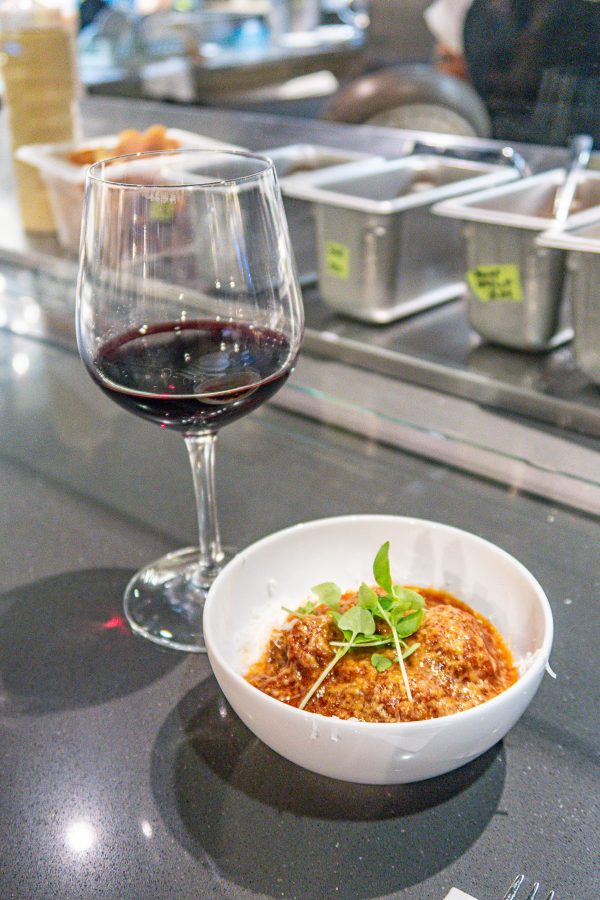 I went to 26 different bars/restaurants/coffeehouses while I was in Winnipeg and Passero was my favorite. It’s one of the best meals that I have had all year. The campanelle pasta with a short rib ragout, black truffle, pecorino, peas, and a horseradish mascarpone was hearty and meaty but light and delicate at the same time. The balance of flavors was magical, my mouth is watering as I type this. I also had the meatballs, which were exceptional. I encountered some other travelers during my time in Winnipeg who were also raving about Passero; make a point to dine here. 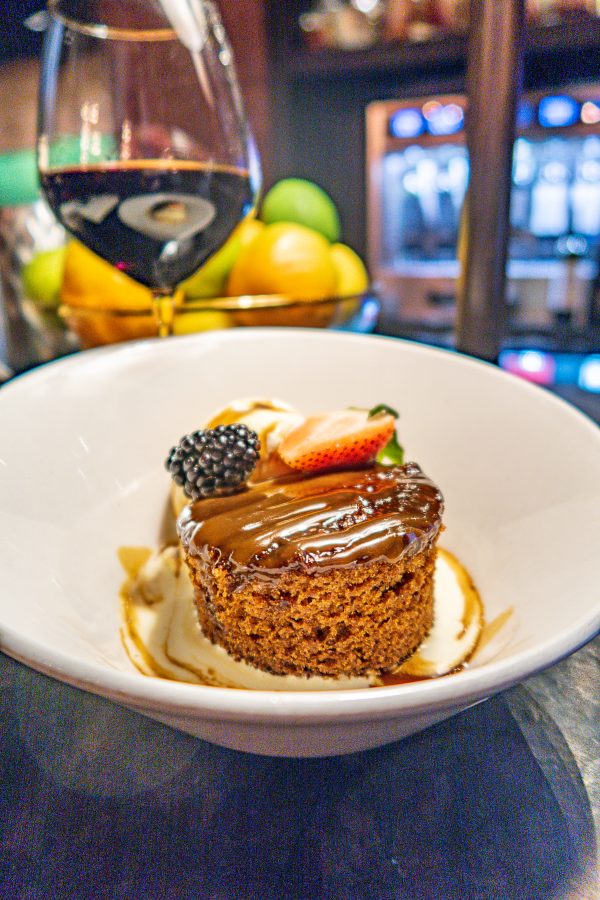 It’s rare that I love a hotel restaurant, but Smith at Inn at the Forks is one of the exceptions. The bar comes to life on Friday and Saturday nights when there is live music. I liked having one final glass of wine and listening to the music before calling it a night. One night I ordered the Sticky Toffee Pudding, which is something I recommend doing.

I loved the breakfast at Smith; I had the Huevos Tostada twice during my stay. This is the place to grab a meal before heading to the spa. 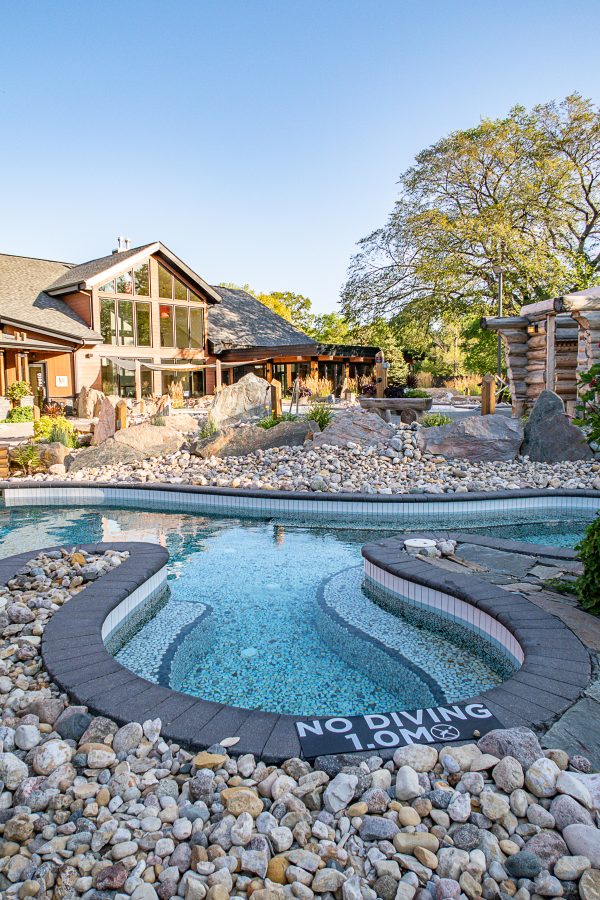 This Nordic-style spa is so good that it is worth coming to Winnipeg just to experience it. The large spa facility has steam rooms, saunas, relaxation areas, and a series of outside hot tubs, temperate pools, and cold water plunge pools. In addition, they offer a full range of spa services. I recommend starting with a massage and then spending a few hours rotating between the saunas, steam rooms, and pools. I recommend going in the morning when it isn’t as busy.

One of the most unique parts of the experience are the aufguss ceremonies that take place in the large sauna. During the ceremony snowballs infused with fragrant essential oils are placed on the hot stones and as they melt the aufguss master uses a towel to more the air in the space to distribute the scent and heat. The aufguss master choses three songs to play during the ceremony, and they almost dance around slowly as they move the air with the towel, it’s relaxing and enchanting. Listen for the gong to signal that it is about to begin and look at the schedule listed outside the dry sauna. 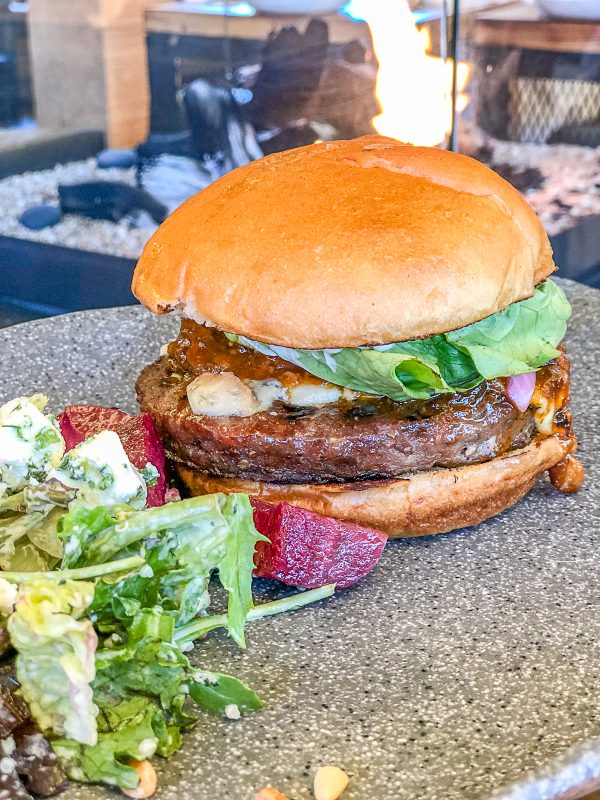 Plan to eat lunch at Thermëa too, the menu has both healthy and comfort food options, and the lounge with a glass woodstove in the middle is beautiful. I had the burger, which I highly recommend.

There are a few things to know about Thermëa, you will want to book in advance since it is very popular. You might want to bring your own flip flops and robe so that you don’t need to pay to rent them. Lastly, the spa spaces are all co-ed and everyone wears bathing suits. 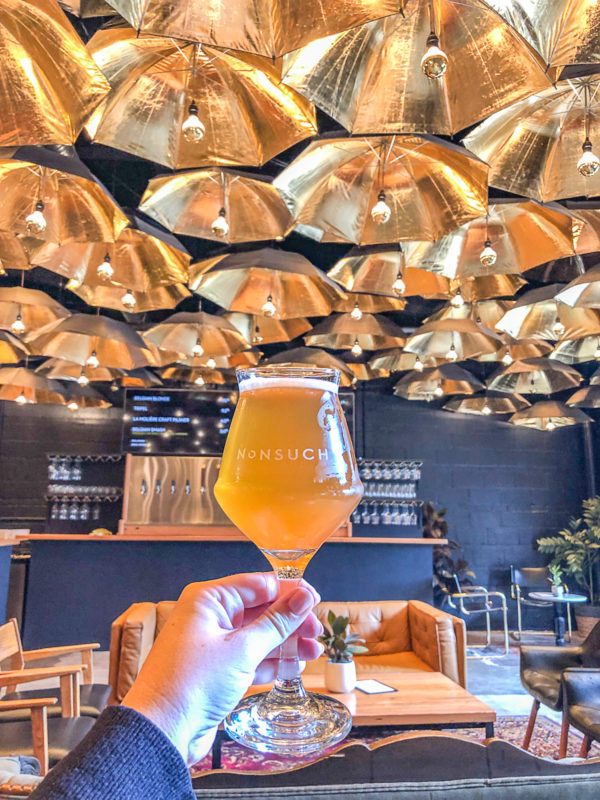 The tasting rooms at these two breweries couldn’t be more different. Nonsuch has an elegant taproom with menu serving snacks like oysters, steak tartare, and fish and chips. 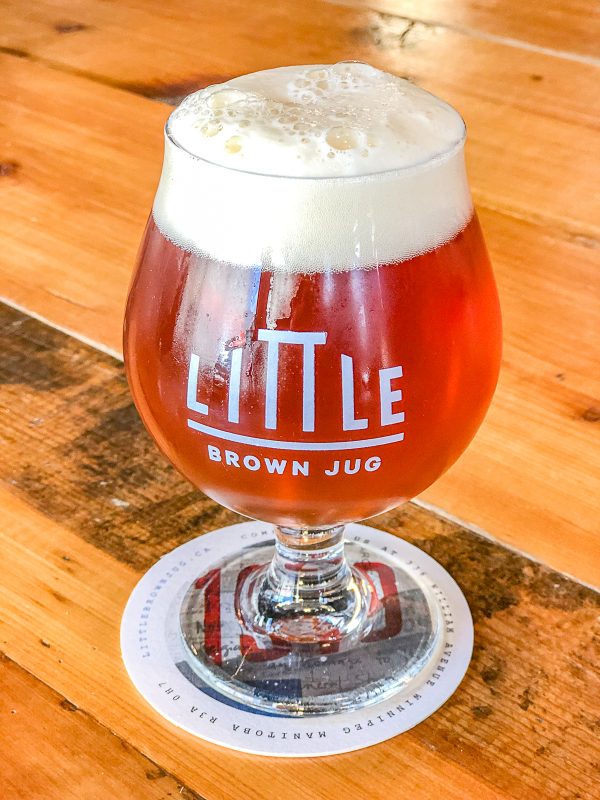 Little Brown Jug puts you right next to the action where you can watch their Belgian-style beer being brewed. Try their signature brew the 1919.

The beers at both breweries are great, and both have outdoor spaces. They aren’t too far apart so you could walk between the two if you want to check out both.

See a Concert or go to a Jets Game

If you want to see a concert, the big acts play Bell MTS Place (Elton John will be there October 4-5). Click here for a listing of concerts at other venues.

The Winnipeg Jets are a NHL team that was relocated to Winnipeg in 2011. There was a different team called the Winnipeg Jets that played from 1972-1996. In 1996 the team was sold and moved to Arizona where they became the Phoenix Coyotes. Locals in Winnipeg explained that the city had an identity crisis during the time the city didn’t have a hockey team.

There were major celebrations when the Jets returned. This happened when the Atlanta Thrashers team was purchased and moved to Winnipeg and renamed the Jets in reference to the original Jets team.

The Winnipeg Jets are hosting the Chicago Blackhawks on December 21, February 9, and February 16. 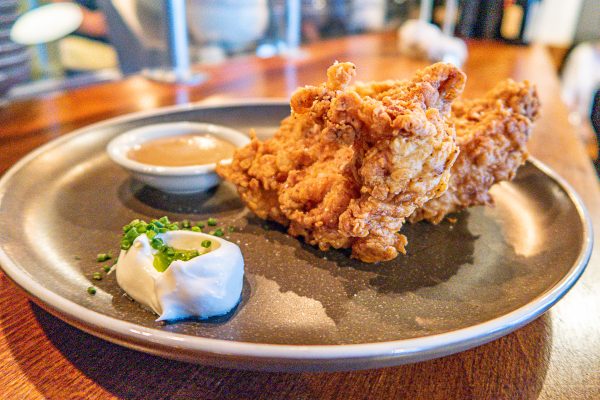 Or if you want to go for dinner go to Enoteca

Enoteca serves up creative Italian cuisine. It’s a sister restaurant to Passero, but the menus are completely different and it is worth going to both. The fried chicken with black garlic ranch, creme fraiche, and chives is just as good as the famed fried chicken at Roister in Chicago. The menu has about a 50/50 mix of meat and seafood dishes.

Entoca is a smaller restaurant, so you should make a reservation.

Locals recommended these two bars that host bands and DJs. The Good Will also hosts karaoke nights. The Handsome Daughter has stand-up comedy nights on Thursdays. 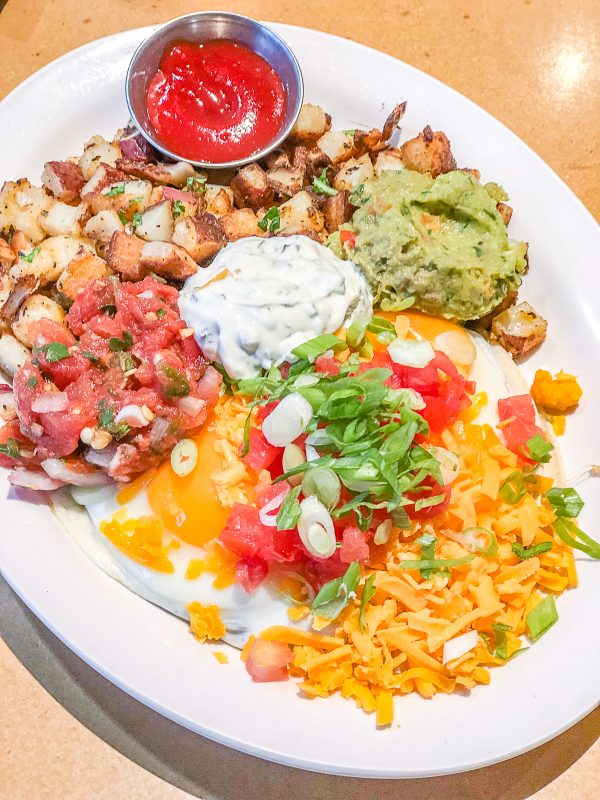 Stella’s has multiple locations, but go to the one in on Sherbrooke Street in Wolseley so that you can pair brunch with visits to some must-see destinations nearby. I had the Mexican Breakfast which my server said is one of the most popular items on the menu. It is made with soft corn tortillas topped with refried beans, sunny side up eggs, cheddar, salsa, guacamole, cilantro sauce, and tomatoes. I love it. The menu has a big selection of egg dishes plus classics like french toast and pancakes. It’s a restaurant everyone will love. 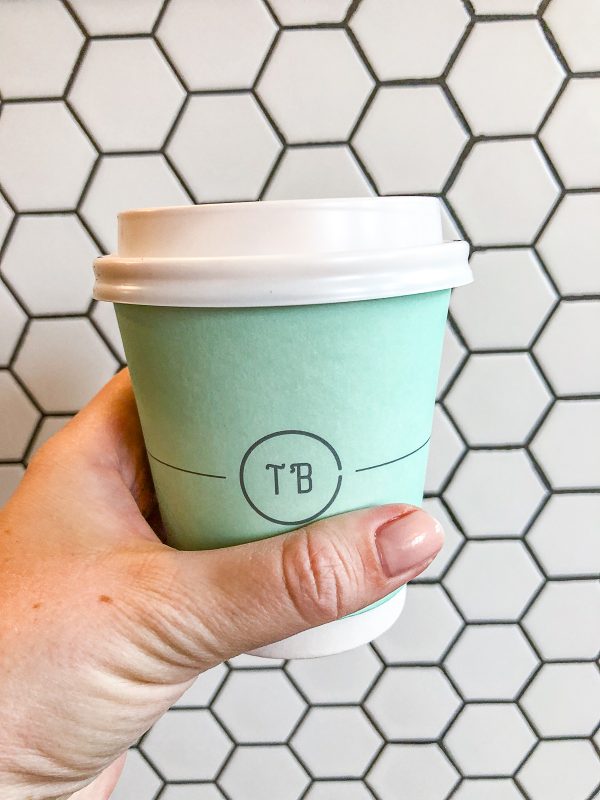 This bright welcoming coffee shop makes the best London Fog that I have ever had. I had it twice during my five days in Winnipeg. Grab a coffee or tea to go and then walk towards Back Alley Arctic. 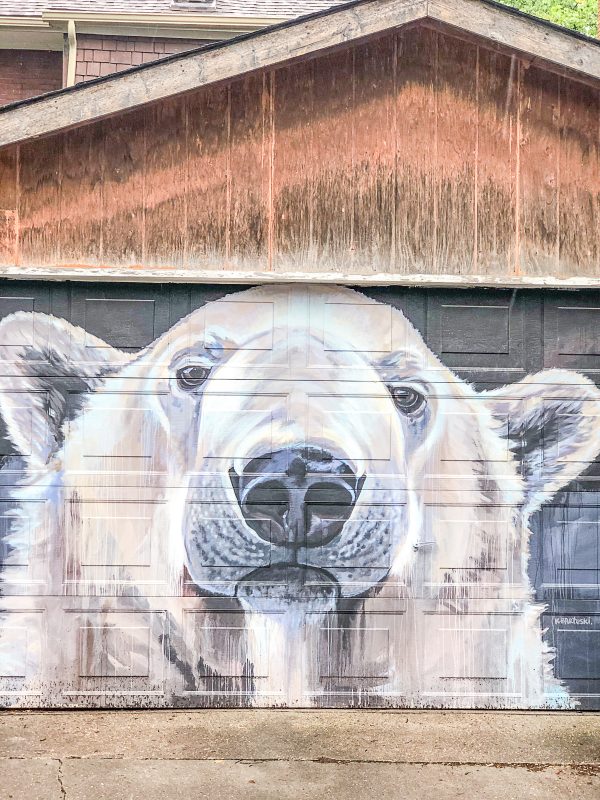 Take the time to walk around the neighborhood a little, I loved the homes with gardens in the front. 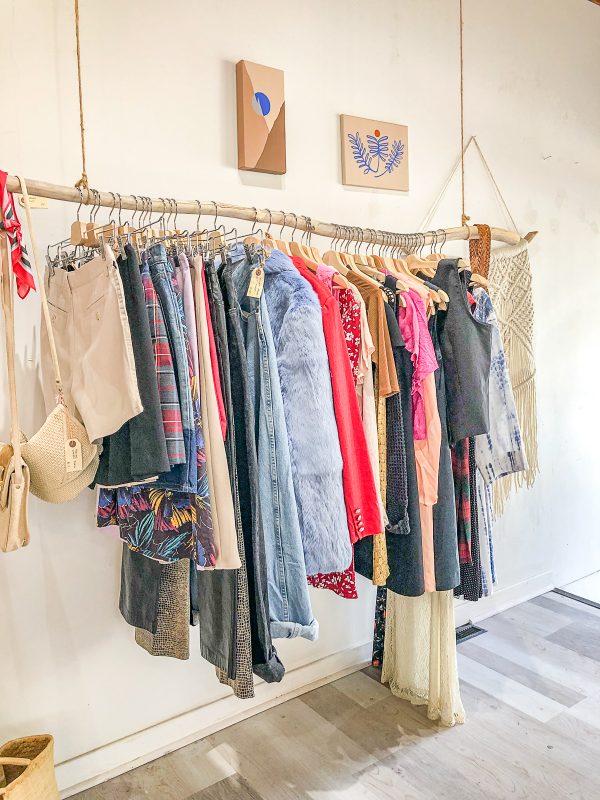 This small boutique on Sherbrooke Street sells women’s clothing, accessories, and home decor items and is a quick walk from Back Alley Arctic and will put you on a street where it is easier to get a cab. 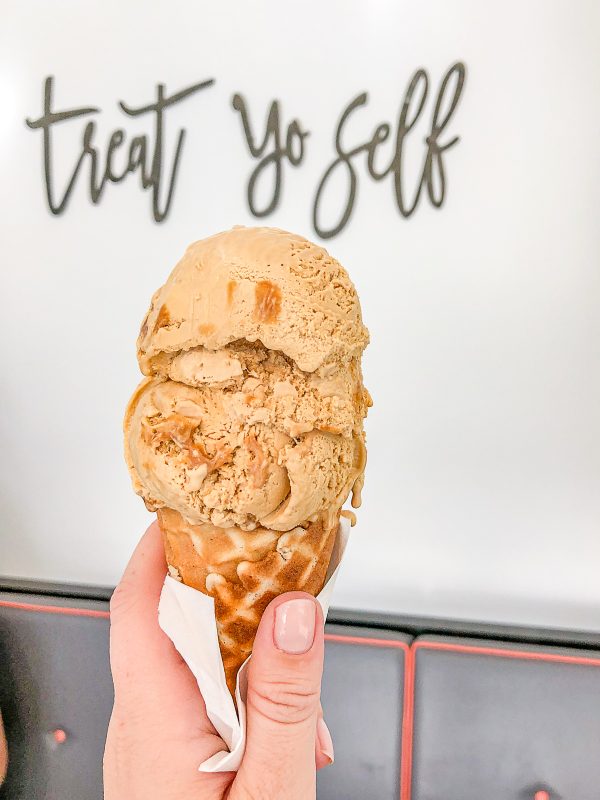 Take a cab from Wolseley to Chaeban Ice Cream in Osborne Village, the ice cream is just as incredible as the story behind the shop. It all started when the South Osborne community came together to sponsor Zainab Ali’s family, Syrian refugees, to come to Winnipeg. Zainab and her husband Joseph, a dairy scientist, wanted to thank the community for their kindness, and start a business to help employee their newly relocated family members, so they they opened an ice cream shop.

Chaeban’s is known for super premium ice cream with inventive flavors like Mojito Mint Patti and Abir Al Sham which is made with rose and orange blossom water, toasted pistachios and cashews, ricotta, and orchid root powder.

From Chaeban’s is it about a 10-15 minute walk going north up to the main section of neighborhood. 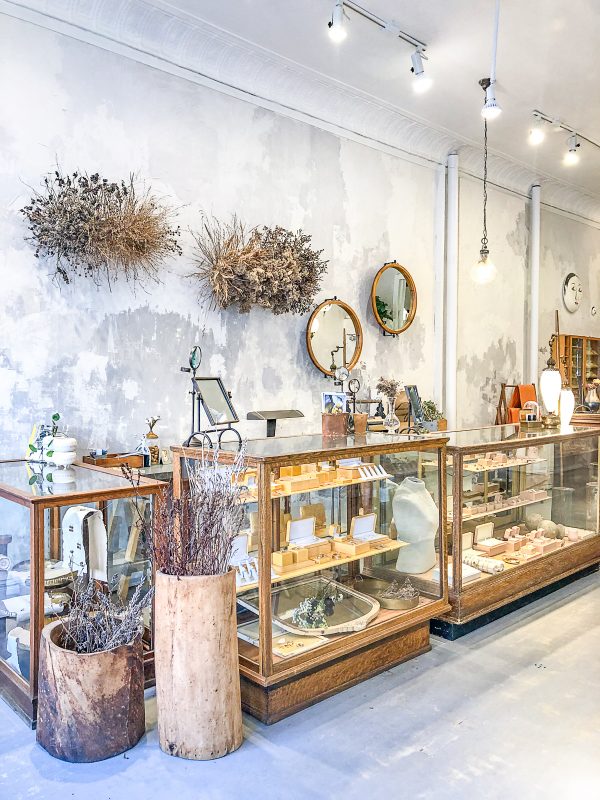 This trio of shops share an owner and are all next to one another. Small Mercies combines a coffee house, home decor shop, and florist. Rooster sells women’s shoes and clothing, and Silver Lotus focuses on jewelry. 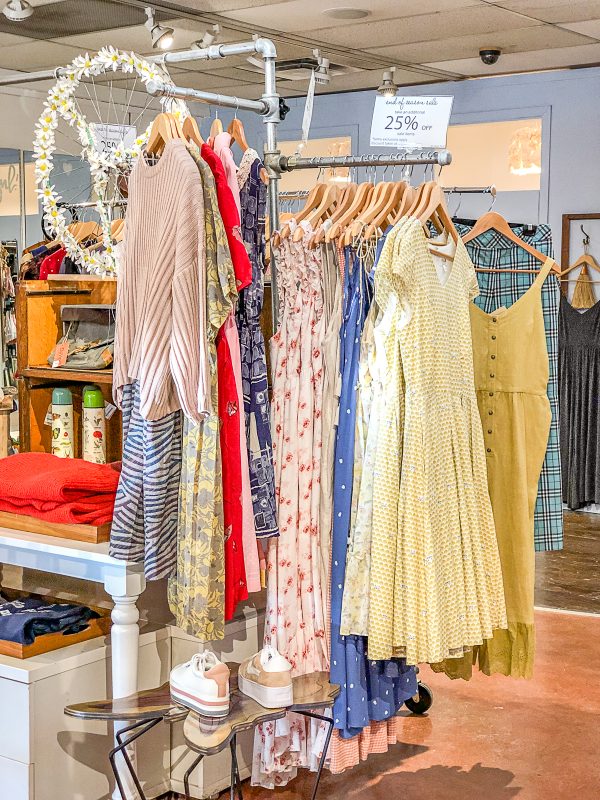 Out of the Blue

Located just across the street from Small Mercies, Out of the Blu was a large selection of womens clothing and it on trend yet affordable. 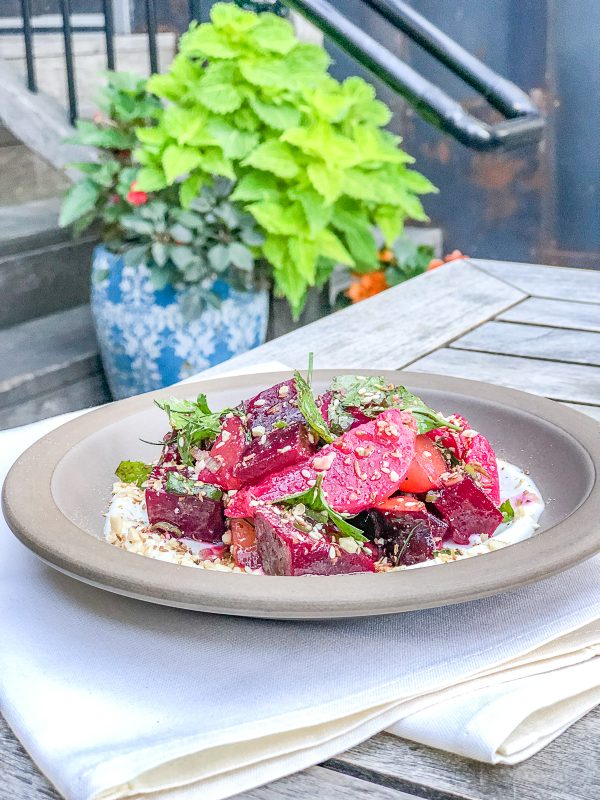 This spot serves classics like Iberico Ham and patatas bravas, plus more modern and seasonal creations like battered and fried zucchini with mint, lemon and ricotta. I also loved the beets and plums served with goat yogurt and cashew dukkah. The cuisine at Segovia is unlike anything I had tasted before and I loved the fresh flavors found in everything I tasted.

Segovia is closed on Tuesdays. 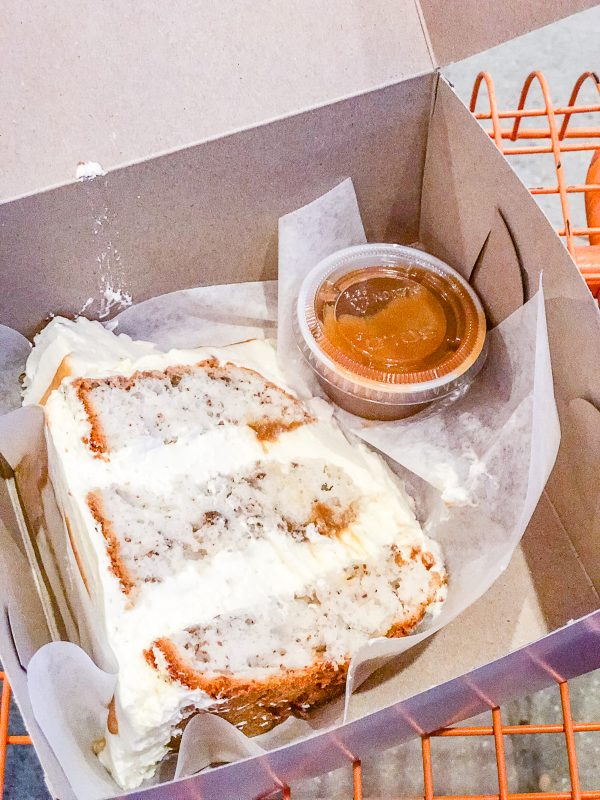 A reader named Julie told me that I had to go to this bakery and order the “schmoo” torte. It’s an angel food cake with pecans that is topped with whipped cream and caramel sauce. It’s light as a feather but so delicious. I am so glad that I listened to Julie and tasted this delicious confection. 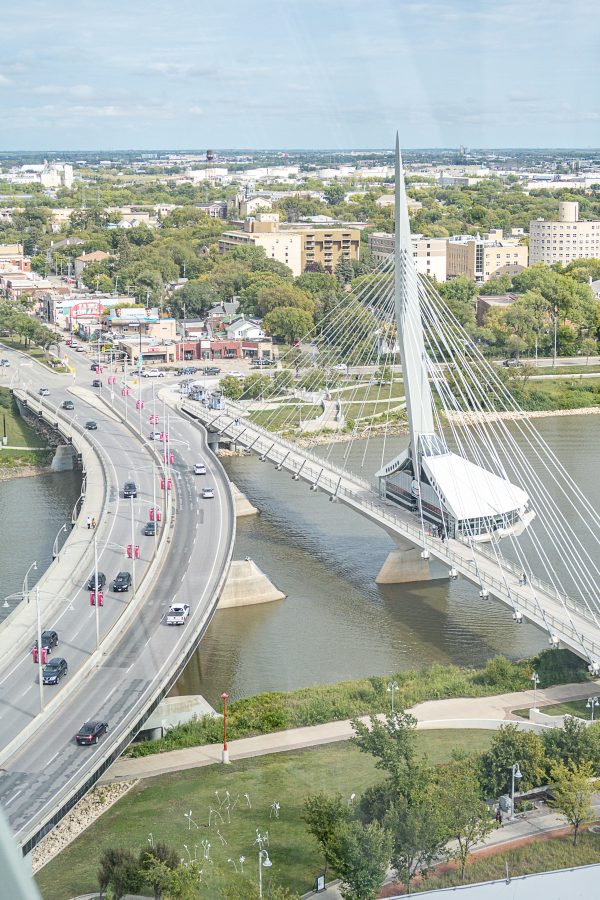 Download the Unicity Taxi App since they don’t have uber or lyft in Winnipeg. I think it will cost less to take cabs than to rent a car.

I just loved Winnipeg! It is a city that wasn’t on my radar until I was invited to visit, but I am already talking about going back. If you have been to Winnipeg and have any recommendations please share them in the comments.

Where to Eat in Winnipeg

11 Foods to Try in Quebec City

What to Do in Quebec City in Winter

I partnered with Travel Manitoba on this trip. As always, all the opinions expressed are my own.