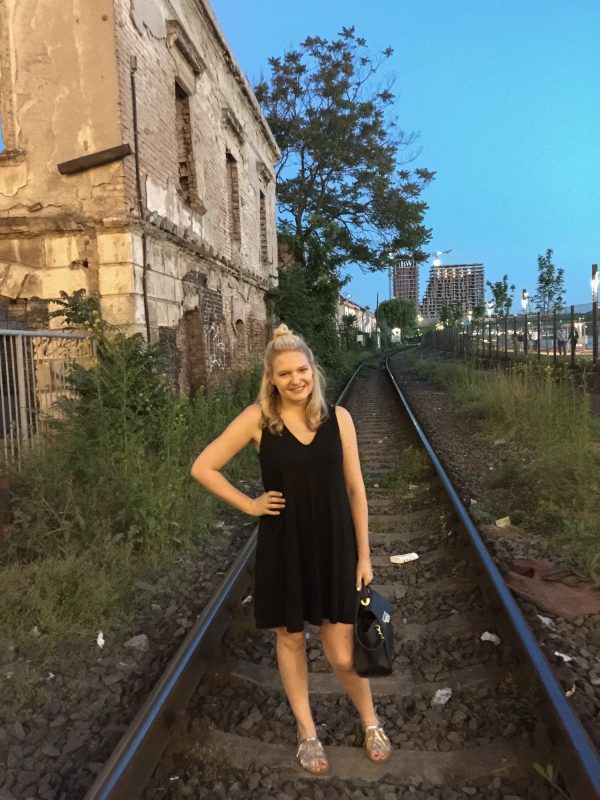 Partying all night in Belgrade is an easy thing to do. The city springs to life at night. I honestly think that more people were out and about in Belgrade after 9pm than during daylight. Belgrade has a population smaller than Chicago, but an incredible abundance of bars and restaurants. 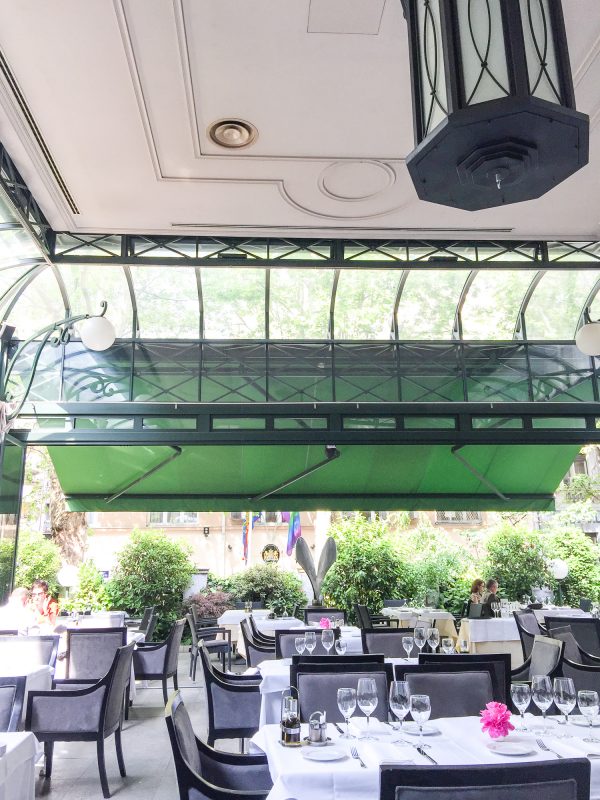 You don’t really hear about Belgrade being a hub for design, but their bars and restaurants are all so thoughtfully designed that each place seemed to have its own distinct personality. We went to a funky place with a large colorful sculpture of an elephant hanging above the tables. Another restaurant had bright red rain umbrellas strung together and hanging over the patio tables. One had brightly colored chairs in a garden terrace. Seriously, Belgrade puts Chicago to shame. And perhaps the most amazing thing was that every restaurant seems to have a massive patio. 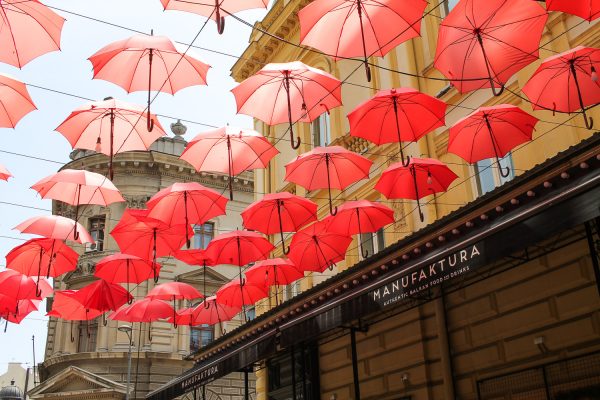 Locals ease their way into a night out. First they eat a late dinner at a restaurant – usually around 9pm. Next they move on to a bar. Then they finish off the night at a club. It’s easy to stay out until 3am – although many restaurants/bars are open 24 hours a day. Locals seem to treat a night out like an event.

Belgrade has several distinct areas filled with restaurants, bars, and clubs. You can pick a neighborhood and hop between bars with ease. There are three different nightlife areas that I recommend checking out: the Savamala district, Ada Lake, and the Skadarlija neighborhood. You could easily pick one area and stay there all night, but it is also easy to grab cabs and jump from place to place. 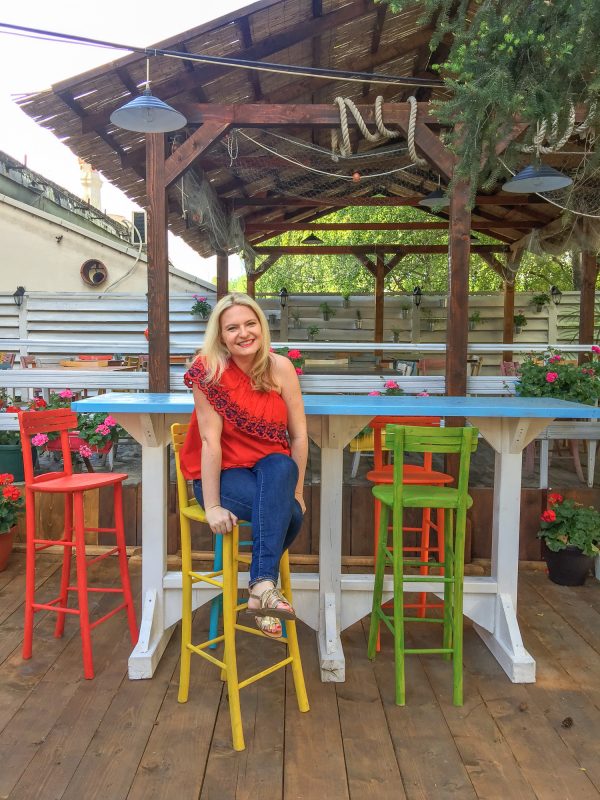 The Savamala district is beside the Sava River, and has a long row of new restaurants/bars. One night we went to Frida for dinner before going to a club. Around 10pm the restaurant transformed into a massive party with live music and dancing. It was like someone flipped a switch from restaurant mode to party mode.

Another night I returned to the Savamala district to have dinner at Ambar, which is just beside Frida. I had the most incredible meal and a couple of beers, and was shocked when the final bill was only $15. The Savamala district is a little more upscale, and it seemed to attract a crowd of people in their 30s and up.

Ada Lake is a manmade lake surrounded by restaurants/bars/clubs many of which are open 24/7. The lake is a popular place for water sports, there were several rowers working out while we were there. We stopped by Ada Lake for an early morning breakfast in mid-May. So it was a little quiet, but it was easy to imagine how the area is the place to be on a hot summer day. Ada Lake is the type of place where you could spend an entire day, the shores of the lake are just like a beach with lounge chairs and umbrellas. The restaurants serve food during the day, before transitioning into being bars and clubs at night. 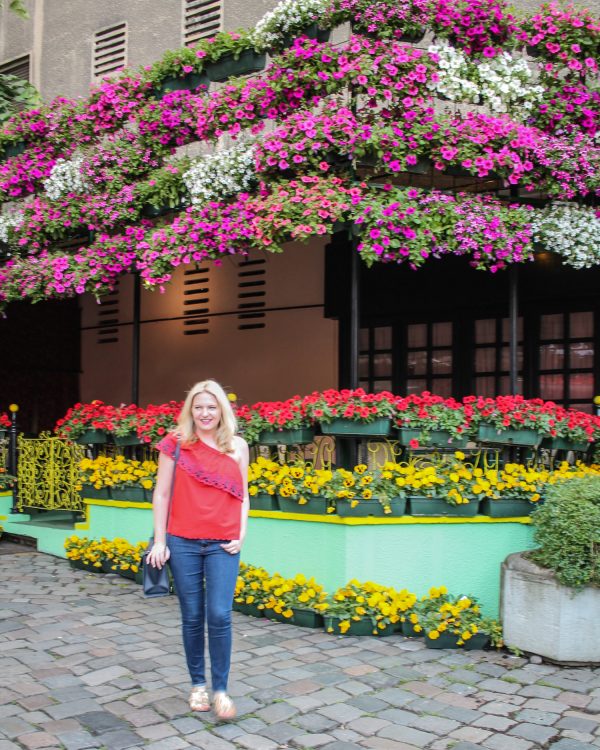 If you want to bar hop, head to the Skadarlija neighborhood. It’s the old Bohemian section of the city and it is filled with pubs with huge amounts of outdoor space and there is lots of colorful street art. You will find people of all ages here, and there is a nice mix of restaurants, bars, and clubs. 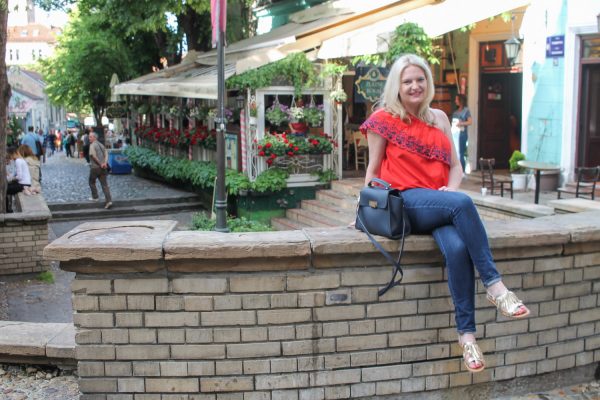 There are two parts of the Skadarlija neighborhood to explore. The first is Skadarska Street which is filled with restaurants. We ate dinner at Tri šešira, a restaurant whose name translated to “3 Hats” one night and they served wonderful local cuisine and it was fun to watch the party unfold and the night progressed. The restaurant was filled with big groups of locals who were just starting their night out. 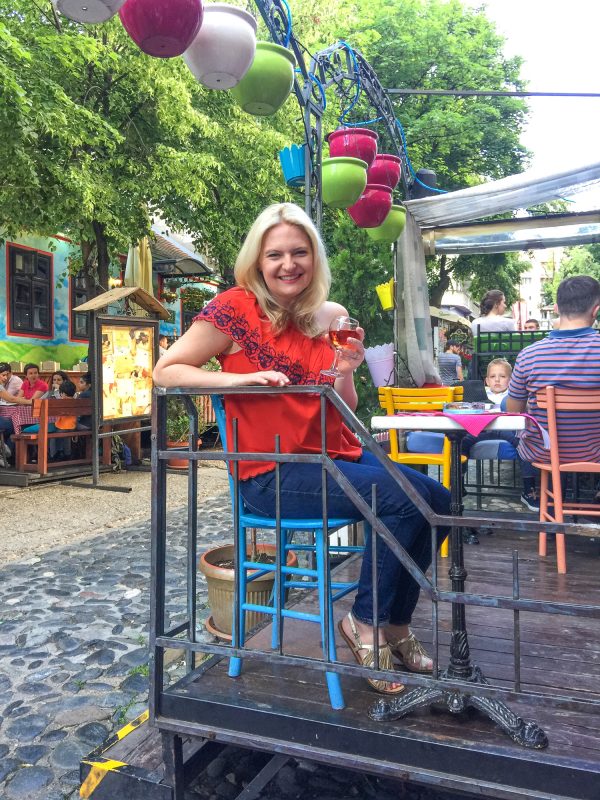 One important bit of advice, choose your shoes carefully before going to Skadarska Street. This street is paved (using that term generously) with rocks and would be a nightmare if you were wearing heels. I should also mention that the bars and clubs didn’t seem to have the strict dress codes we are used to in the US.

The second part of the Skadarlija neighborhood to check out is 15 Cetinjska Street. The address refers to a complex of bars occupies the space that was once a beer factory. A first glance you could easily walk by thinking it is simply a parking lot, but once you walk inside the complex there is so much to explore. You could easily spend an entire night here. 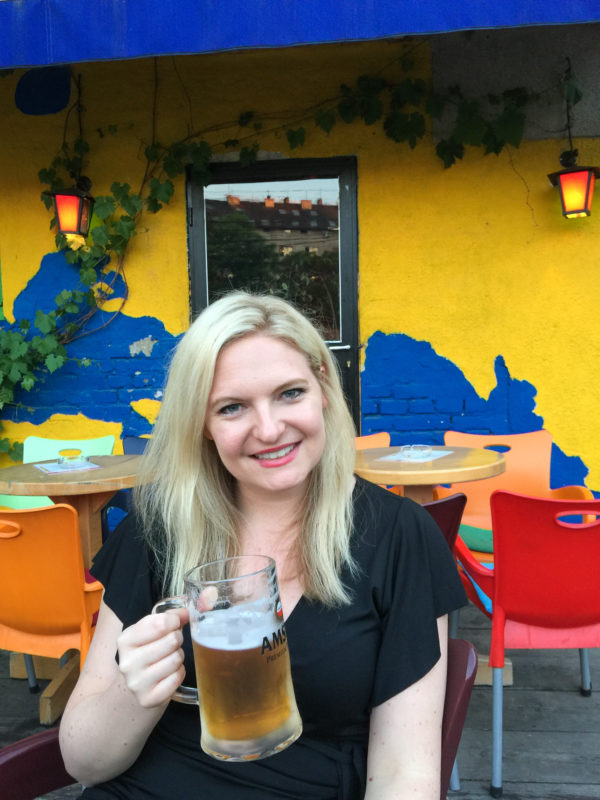 During the day 15 Cetinjska Street’s pubs are open and are filled with people sitting in the sun and catching up with friends. One day I grabbed beers with one of our tour guides, Nenad, at Klub Dvorištance. Nenad was incredibly knowledgeable, and he explained that each bar and club is known for something different, and that certain places are popular on specific days of the week.

Nenad also recommended a pub crawl for me to join when I returned to Belgrade on my own. The pub crawl is run by Belgrade Walking Tours. It was only $12 and it included drinks in 4 different bars. A group of 19 people from all over the world assembled at Republic Square and we set out on foot the Skadarlija neighborhood with a friendly guide named Mia. 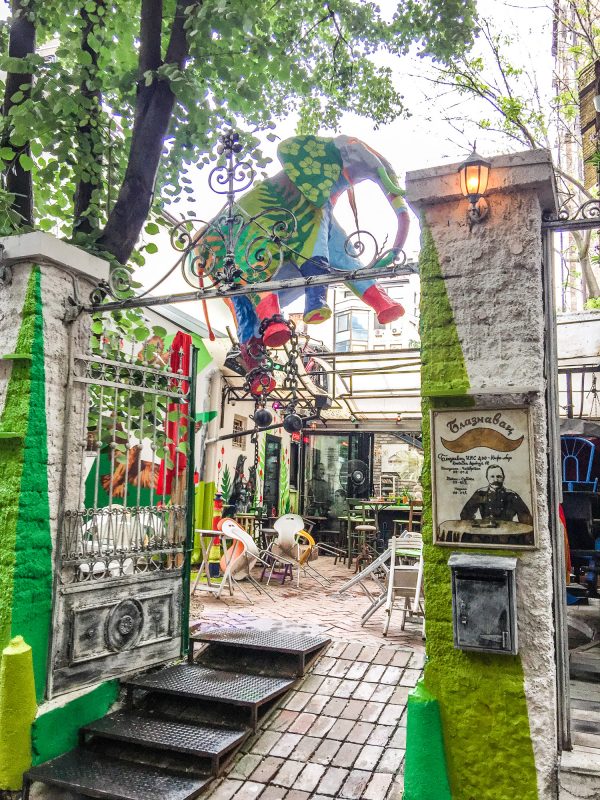 Our first stop was Blaznavac, a bar that Nenad had pointed out earlier. It has a modern bohemian aesthetic with a multicolor elephant sculpture hanging above the entrance next to a unicorn pulling a chariot. I was not exaggerating when I wrote that these places have personality. 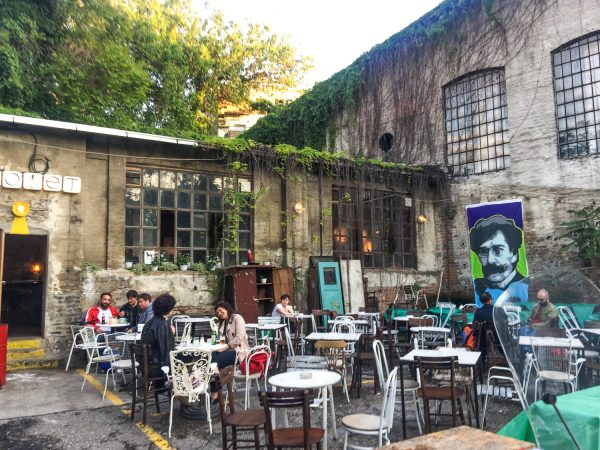 Later pub crawl made another stop at Polet, a bar, performance space, gallery hybrid that is across from Klub Dvorištance at 15 Cetinjska Street. This is how I ended up watching a drag show with 6 fraternity brothers. Polet has a very active events calendar, and they are known for embracing all art and music forms. We happened to be there on the night that Olympia Bukkakis was performing. The guys were surprised and confused, but also earnestly interested and I think they each asked me to provide some context (something that proved to be challenging since they hadn’t heard of Rupaul).

After Polet the pub crawl moved along to a nearby nightclub called The Wurst Platz, they had a great live band playing a mix of 90s American and Serbian rock. I bought a round of 7 half liters of beer and it cost less than $20. It was lively, but not too rowdy or sloppy (there is a fine line). Before I knew it, it was nearing 2am and I decided to call it a night.

While the Wurst Platz was right in the Skadarlija neighborhood, most of Belgrade’s nightclubs are on boats in the river. Nenad explained that the nightclubs in Belgrade have summer and winter locations. In the winter they are inside, but in the summer they move down to boats on the river. How amazing is that?! The clubs make the move to the boats at the beginning of June. 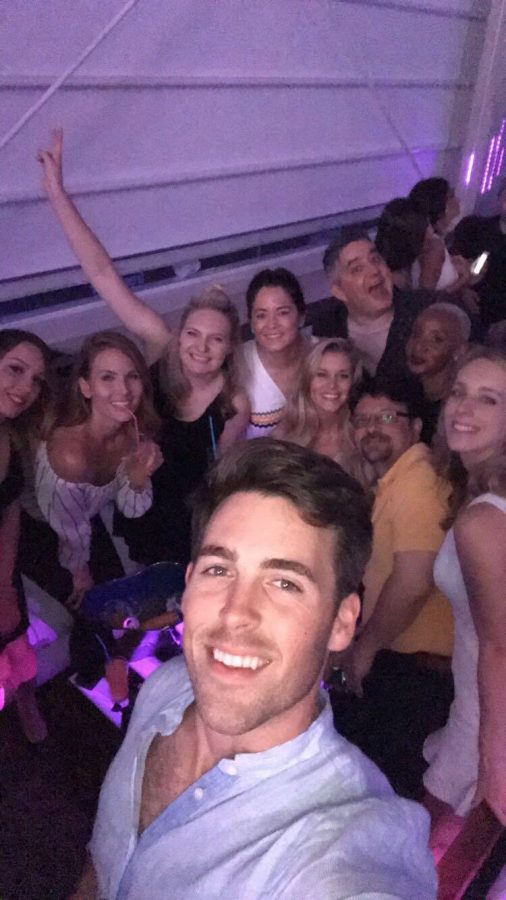 One of the most popular nightclubs on a boat is Freestyler. It’s so big that it doesn’t really feel like a boat, it seems like a nightclub that requires you to walk across a moat to enter. A night at Freestyler was part of the itinerary on the first leg of my Belgrade trip when I was traveling as part of a press trip with 6 other American bloggers. Freestyler plays mostly music in English, and I was surprised at how reasonable the prices were compared to the prices for bottle service in the US.

If you want to learn more about Belgrade’s night clubs, we met a local blogger who covers Belgrade nightlife on her site Belgrade at Night.

The American fraternity brothers told me that they were on a several week tour of Europe with stops in Florence, Budapest, Berlin, and Dublin. They explained that they threw Belgrade on the itinerary as a wildcard. They had expected Berlin to be the best place to party, but were pleasantly surprised with Belgrade’s variety of bars and clubs, and the low drink prices. There was an ease to going out in Belgrade. There were no lines, no cover charges, and managing to order a drink at the bar proved to be easier than it is in America. And generally speaking, I thought the bars where way cooler than the places at home. Sure, Chicago has some fun places with beautiful patios, but good luck getting in on a weekend. In Belgrade, that wasn’t a problem!

I partnered with Serbia Tourism on this series of blog posts. If you are looking for a tour guide you can contact Nenad at nenadblagojevic@yahoo.com