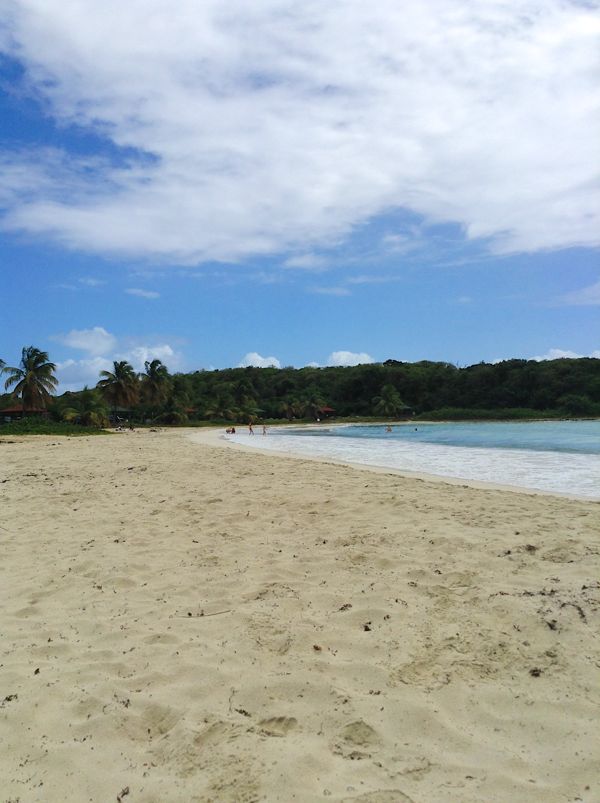 Vieques is a small little slice of paradise just a short ferry away from Puerto Rico. There are two main towns on the island, Isabel II (pronounced Isabel secundo) on the North, and the larger and livelier Esperanza in the South. It’s just a 15 minute drive from one to the other and a trip around the entire island takes 90 minutes.

Vieques is casual and laid back. Even at the nicer restaurants you will find people in swim trunks. While San Juan is bursting with energy, Vieques is it’s sleepy sibling where wild horses, dogs, and roosters roam the streets. 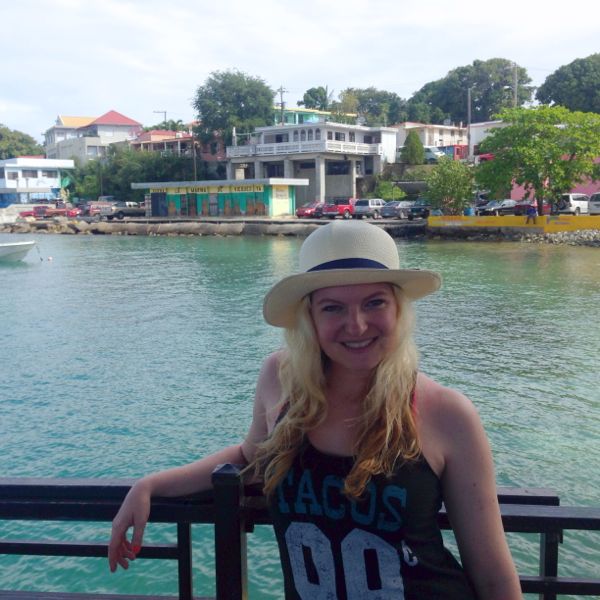 My vacation planning style is fly by the seat of my pants. I’ll grab a guide book when I get there and figure things out. Charles prefers to plan every minute of a vacation and to document it with an excel spreadsheet before departure. He then presents me with 2 copies of said spreadsheet which I lose almost immediately. I was in charge of planning this vacation, so instead creating a spreadsheet, I crowd source suggestions. I announce where I am going and hope people chime in to help me plan. The whole idea of Puerto Rico came about when my friend Erin of Loop Looks suggested it. She specifically mentioned Spoon Food Tours and the Tour of the bioluminescent bay. After speaking with Erin, I talked to my friends Emily and Kelly who both recently honeymooned in San Juan and Vieques. Why read tour books when I can get the facts from people who know me? Huge thanks to Erin, Emily, and Kelly for all their help! 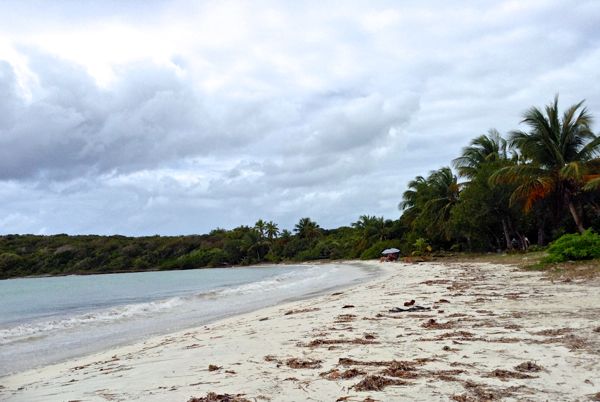 We arrived on Vieques, and when we checked in at the hotel, it became clear that I might have dropped the ball on a couple of things. I hadn’t rented a car, or booked the bioluminescent tour. But I sorted both these issues out with 15 minutes and a little determination. When it comes to rental cars, you need a Jeep. Most rental cars are Jeeps, but you do not want a scooter. In some places the “roads” are actually a series of potholes that make Chicago’s roads in the spring look drivable. When it comes to the bio bay tour, book with Jak, they have glass bottom kayaks which just make the experience even more amazing.
Vieques has over 20 beaches to explore. Each is slightly different, and the condition of the roads to these beaches varies greatly. We made the trek to Punta Arenas which involved bouncing our way through two miles of pot holes – I wouldn’t recommend it since there are equally beautiful beaches that are more accessible. The beach itself was so secluded I felt like I was in an episode of Lost. We were warned that no-see-ums take over the beach at 2pm so our stay was brief. Next we went to Media Luna, a bigger wider beach in a small bay. The water had too much seaweed for my liking, so we switched beaches at lunchtime. Next we went to Caracas which had the softest sand and far less seaweed. Part of the fun of being on an island full of beaches is exploring them until you find one that you love. One thing to know is that quick, yet heavy, rain showers might pass through, and if you choose a beach that you can drive up to, you can hide out in your car while the storm passes – seriously these storms come out of nowhere! 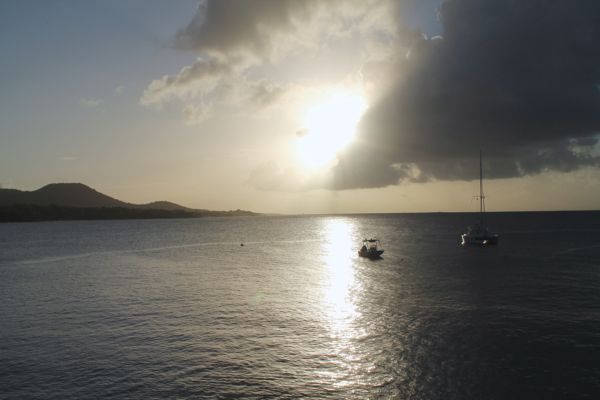 We spent our days at the beaches, and our nights exploring the rest of the island. My favorite thing was the food (not surprising), and Charles’s favorite part of the trip was kayaking in the bioluminescent bay. As I mentioned, Charles let me plan this trip – so he hadn’t done much research and he didn’t know about the bioluminescent bay, which meant that for him, it was a magical surprise. We met up with JAK Water Sports in the parking lot of Sun Bay Beach at 8pm. After a quick introduction and some aggressive bug spray application, we piled into a van and drove 8 minutes to the bio bay. There we were given instructions on how to paddle, and hopped into kayaks two by two. The heavier person went in the front, which gave Charles the opportunity to accidentally splash water all over me, at least the water was a warm 82 degrees. 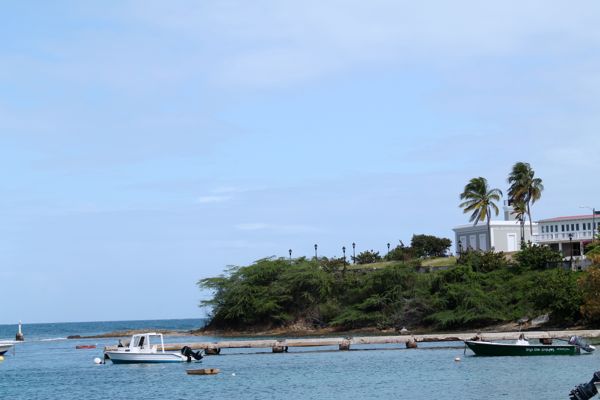 Almost as soon as we started paddling the water started to glow. Well, it is actually some rare plankton that glow blue when they are disturbed. This phenomenon is incredibly difficult to capture on film, and my iPhone wasn’t sophisticated enough, and I didn’t want to risk bringing my DSLR in a kayak. Thus, I will attempt to use words to describe the experience. As you paddle, stick your hand in water, or otherwise move the plankton in the water, they begin to glow a cool shade of neon cobalt. The luminescence stirs through the water just briefly and disappears. You can look down throw the glass bottom of the kayak and see a flurry of tiny individual plankton glowing as you paddle by. You can scoop up water in your hand and watch specks in the water glow. It inspires a childlike awe and giddiness in everyone. Charles was the most excited out of everyone in the group, he happily splashed this hands in the water for the full 90 minutes.
The bio bay in Vieques has a unique environment that is perfect for the bioluminescent plankton. The shape of the bay itself doesn’t allow of the exchange of much water, keeping the plankton in the bay. The bay is surrounded by red mangrove trees which feed the plankton minerals and nutrients. The water itself is shallow – just 13-15 feet at its deepest, which keeps the water very warm, which is crucial since the plankton start to die off if the water dips until the 70s. Essentially, this is a special place that is home to a rare phenomena. There are two other bio bays in Puerto Rico, but the one in Vieques is known for having the most luminescent waters.
Once we had kayaked to the center of the bay – which is very easy work since the bay is very calm, the group circled up and one of the guides used the most intense laser pointer ever to point out constellations. The lack of light pollution in the area makes the stars clear and bright – a special treat for a city dweller. I have been on tours in Central America and the Caribbean before. I have tubed through ceremonial caves, repelled down waterfalls, zip lined through the rainforest, and fished on private island – this tour was my favorite. If you go to Puerto Rico, make a point to go. 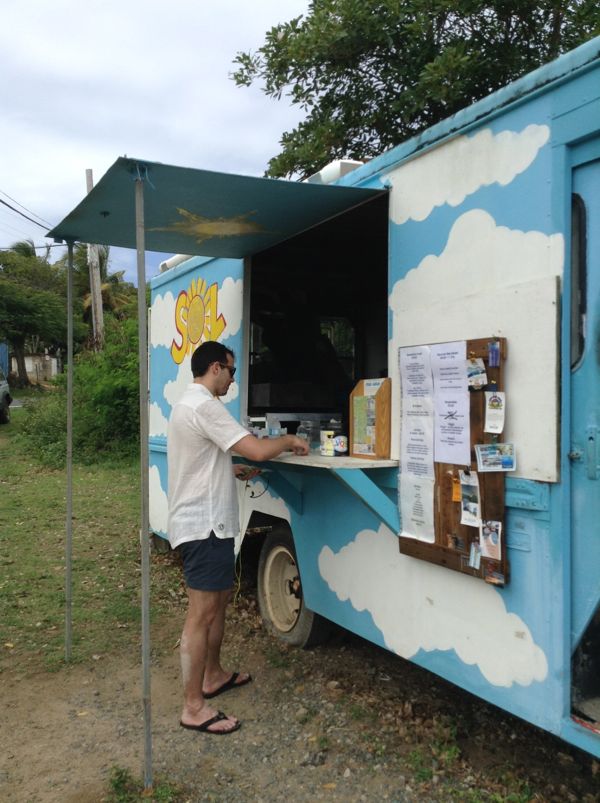 You might be wondering what I ate to fuel all of my beach exploring and kayaking adventures. We dined at a handful of location restaurants, but one of my favorite discoveries was a food truck. Sol Food is a small food truck situated beside the road that leads to several beaches, including Caracas. We stopped for a late lunch and ordered way too much food because I was overly excited and wanted to try everything. Sol Food’s sandwiches are massive in size and taste. 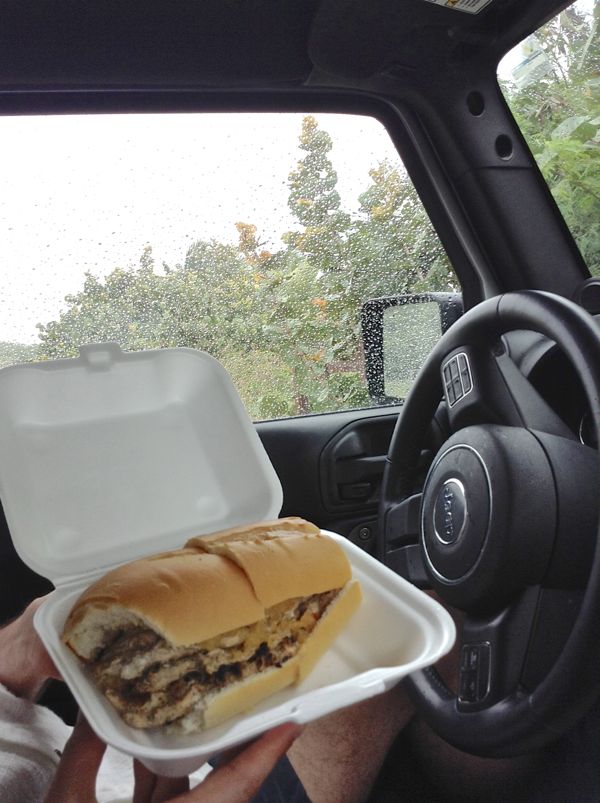 We ordered the “Bob Marley” a traditional jerk chicken sandwich with habanero peppers and pineapple (pictured above), and a Cuban. Now these sandwiches were more than enough food – but I didn’t realize that. 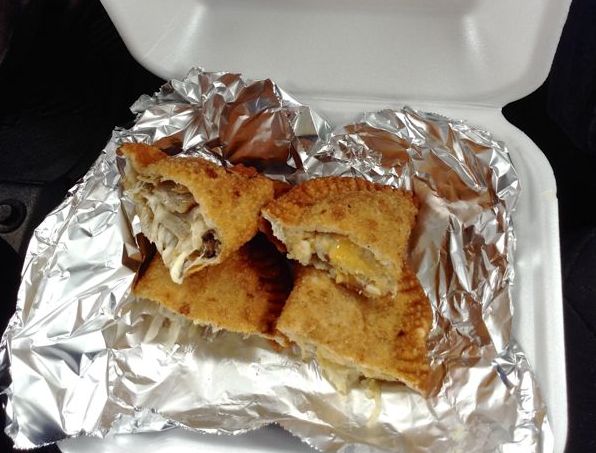 I also ordered two empanadas because they were the most creative empanadas I have ever encountered. One was a reuben empanada (on the left), and the other was a pierogie empanada. What?! Take all the ingredients of a reuben and put them into an empanada! Or completely combine a Polish classic with a Caribbean staple – so inventive and equally well executed. 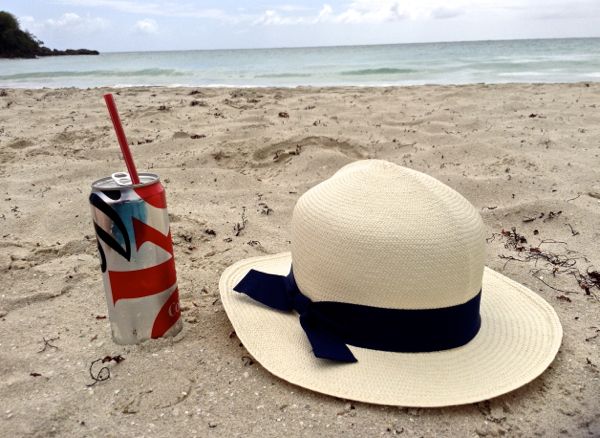 I should note that Sol Food is a food truck that doesn’t move. It’s tires are flat and it’s on cinderblocks, so it isn’t going anywhere, they have a perfect location anyway. Beach goers can swing by and pick up food for a picnic, which was our plan exactly. Except that the moment I set foot on the beach it began to rain. We turned out beach picnic into a Jeep picnic. I didn’t get the beautiful food on the beach with palm trees in the background photos I hoped for, but we had a wonderful meal while the raindrops drummed on the roof of the car.
Vieques is only 52 square miles, so there isn’t much to do beyond relaxing on the beach, partaking in water sports, and eating. I will be finishing up my series of posts on Puerto Rico with a review of my favorite restaurant on the island next Tuesday.
Have you been to Vieques? I’d love to hear your favorite things about the island.