It is the time of year when staying inside all day on Sunday, and cooking brunch at home is far more appealing than going out in the cold. These homemade cheesy Spinach Artichoke Omelettes are a weekend brunch that is just as good as any restaurant brunch. 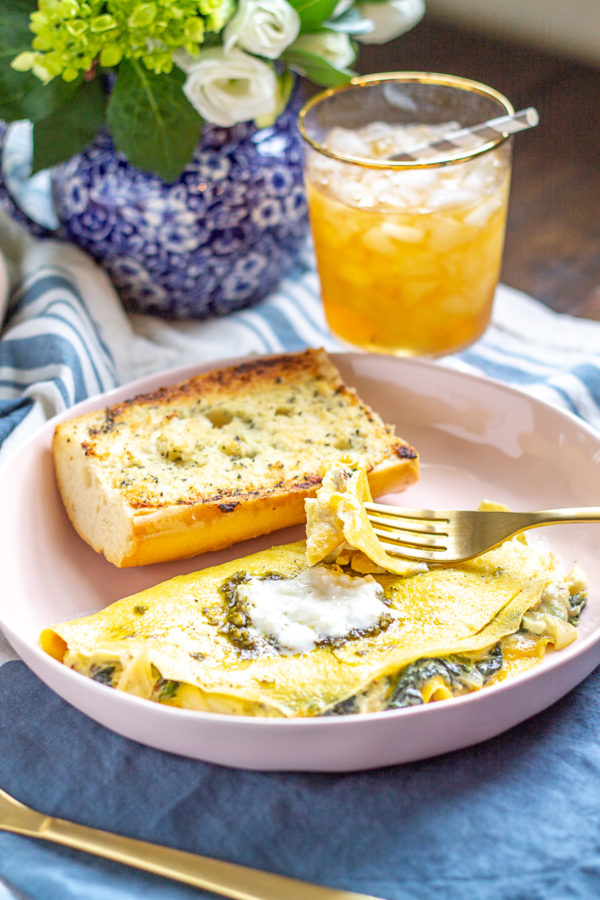 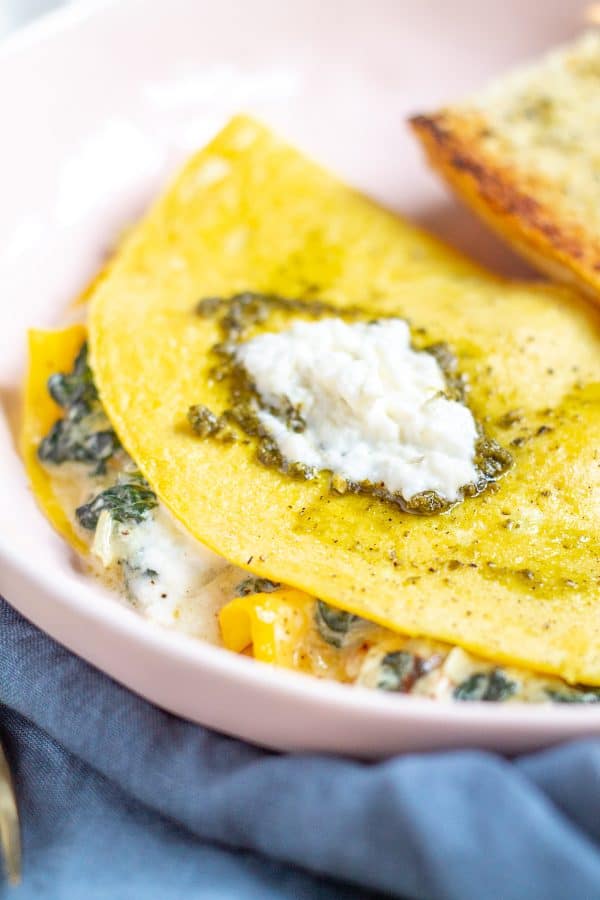 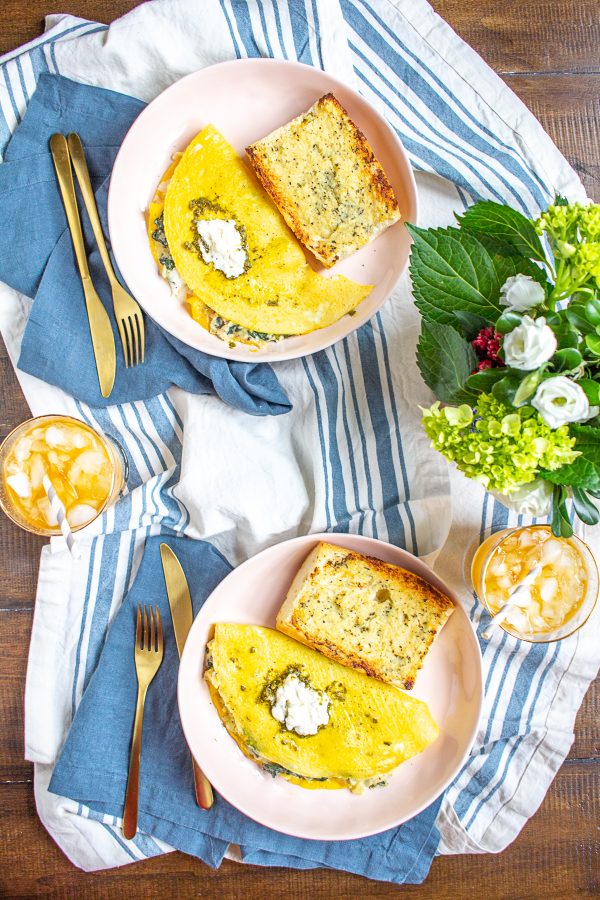 I was thrilled to discover that my grocery store sells tubs of stracciatella di bufala. This cheese is comprised of shredded cheese in a thick cream, the consistency is similar to cottage cheese. Stracciatella has a rich buttery cheesy flavor. It is softer than other soft cheeses because it is part liquid, for this reason it is sold in tubs. If you are unable to find stracciatella, you can use a ball of burrata. 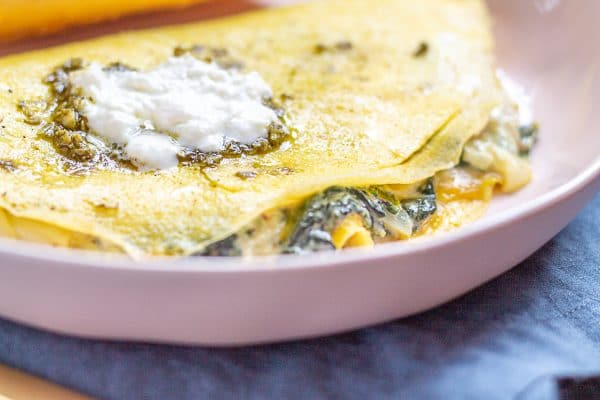 Next I added the artichokes, and a touch of parmesan and mozzarella. Once that was incorporated I let the mixture simmer and thicken. The secret to a really flavorful spinach artichoke filling is to cook the mixture until the cheese is slightly toasted. It adds a richer flavor.

You will keep the spinach artichoke filling warm while you cook the omelettes, and then you will scoop the filling into the center before folding the omelettes in half. 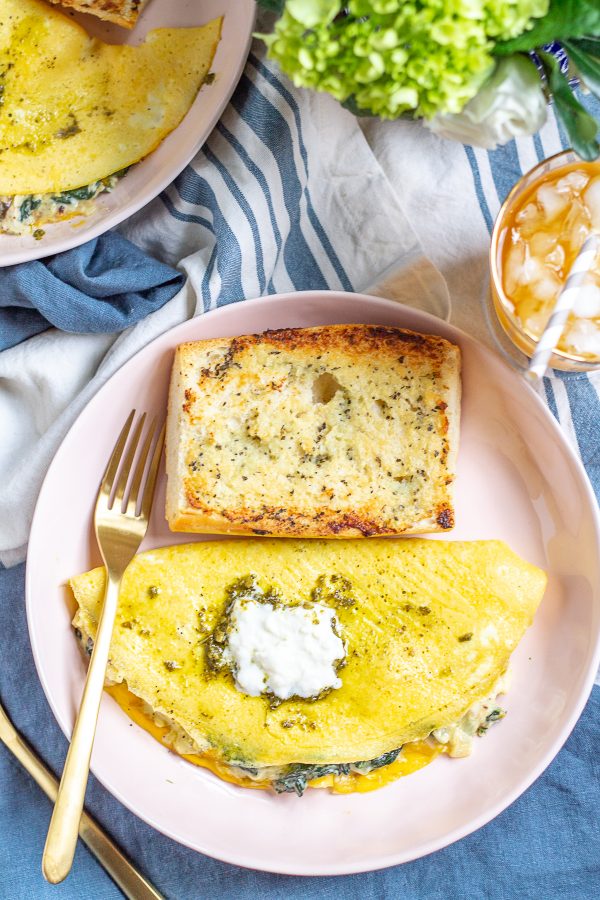 I served the omelettes with garlic bread, it perfectly complements the spinach artichoke omelettes.

How to make Spinach Artichoke Omelettes:

Heat the olive oil in a skillet over medium heat. Add the onion and garlic, and sauté until the onion is translucent.

Then stir in the stracciatella, and add in the lemon juice and spinach. Stir frequently until the spinach wilts.

Next stir in the mozzarella, parmesan, and artichoke, and bring to a steady simmer, letting the mixture thicken for 2-3 minutes.

Whisk the eggs together. Melt the butter in a skillet heated over medium low heat. Pour half of the whisked eggs into the skillet. Move the eggs around the pan so that they are at an equal level and just hitting the edges of the skillet. Then cover the skillet and wait.

After about 3-4 minutes the egg on the top surface of the omelet should be setting up. At this point add spread have of the cheesy artichoke spinach mixture over the top of the eggs.

Carefully remove the omelet from the skillet, and place it on a plate. I garnished with a touch of pesto and a dollop of stracciatella.

Want to save this recipe for Spinach Artichoke Omelettes for later? Here is an image to save on Pinterest: 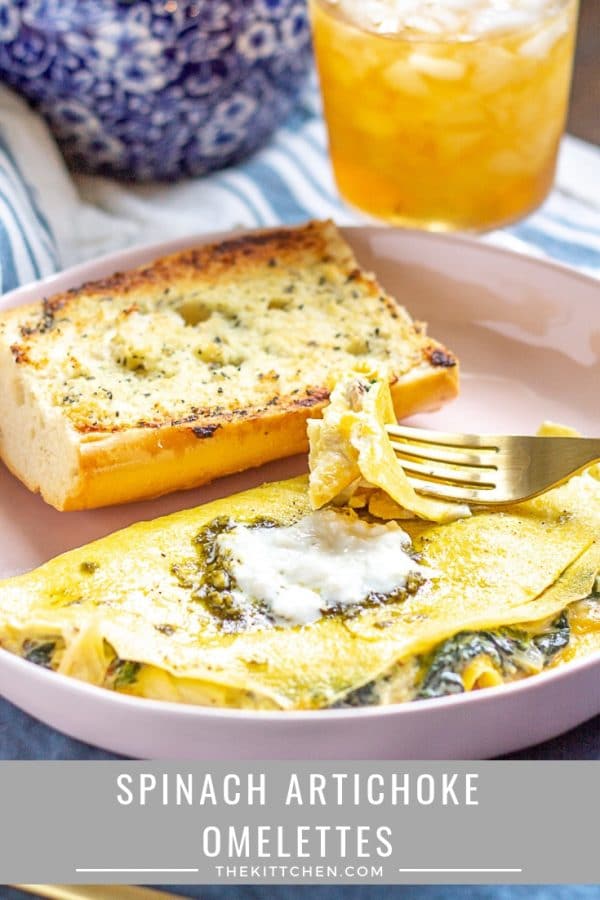