Slow cooker shredded beef tacos are made with corn tortillas filled with tender spicy shredded beef and topped with cheese, jalapeños, cilantro, and sour cream. This is a zero fuss meal that can feed the whole family with only minutes of active preparation time. 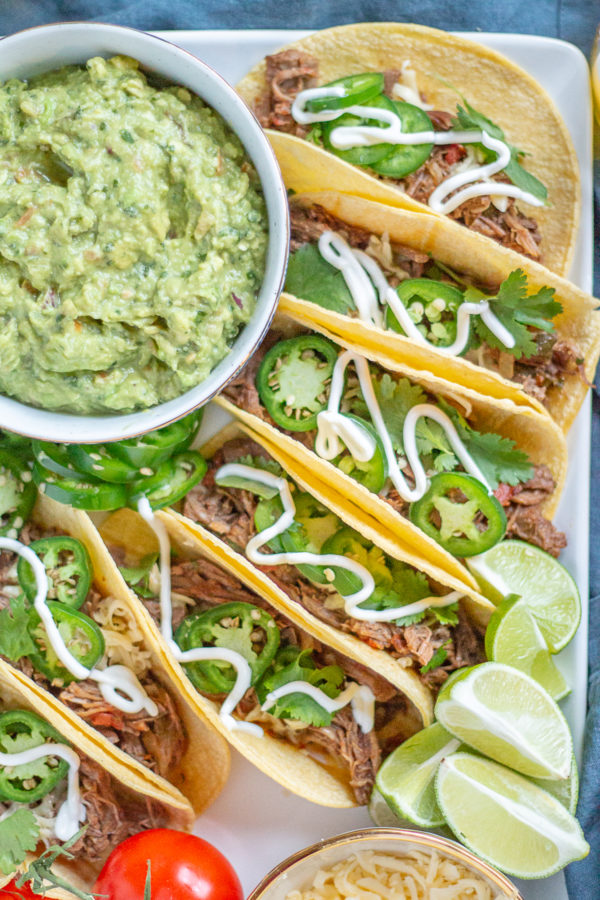 These slow cooker Shredded Beef Tacos were inspired by my visit to corn and cattle farms with Illinois Farm Families®. This group of volunteer farmers’ mission is to educate the public on how our food is raised, I got to visit a livestock farm and a corn farm for a firsthand look at two family run farms in Illinois! 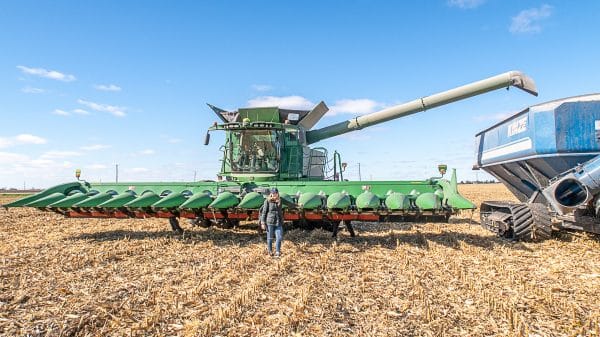 As someone who moved to Chicago from the East Coast, I was surprised that so many farms are located just an hour or two from downtown Chicago. It was just about a 90-minute train ride from downtown to Family Farm Meats and Larson Farms, where I got to spend the day learning about how corn is grown and harvested and how our meat is raised. 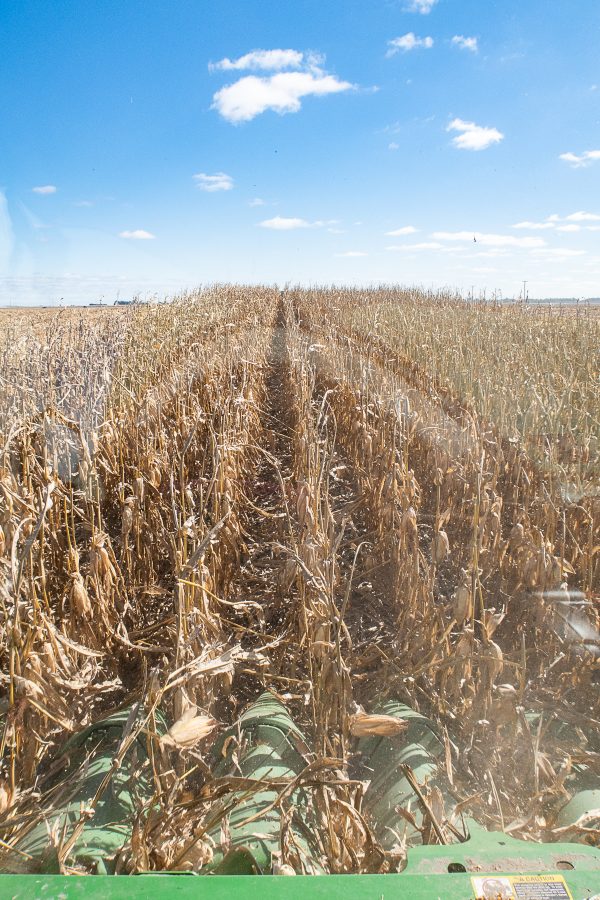 The day started off with a quick combine ride – something I had never experienced before. There is something soothing about how rapidly the corn is run through the combine, striping the kernels, and storing them in the back. The back of the combine fills up with kernels in just minutes! It’s surprising how fast it all happens! 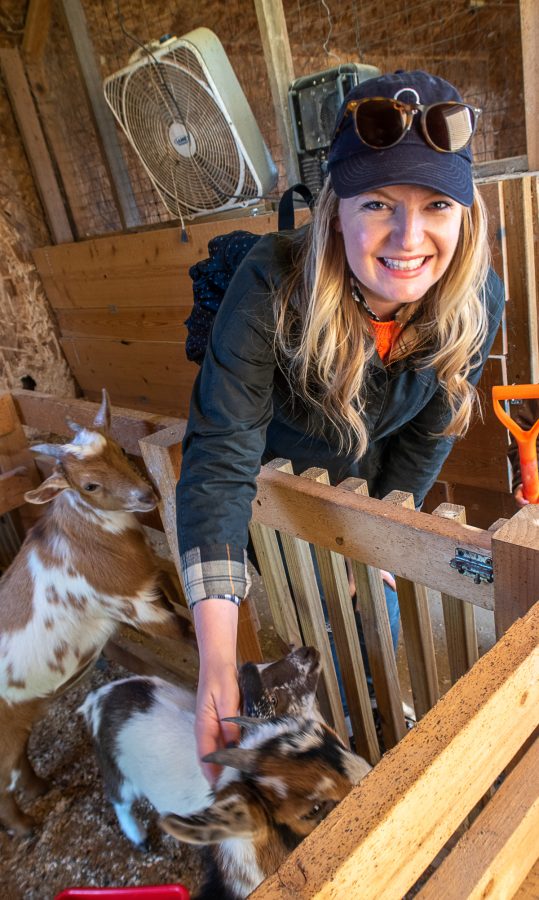 Next I went to Family Farm Meats, where I met up with Jenny and her son Owen. In 2012, Jenny purchased her family’s farm and today she raises cattle, hogs, and chickens. The farm is also home to a pet goose named Pearl, and some adorable goats. 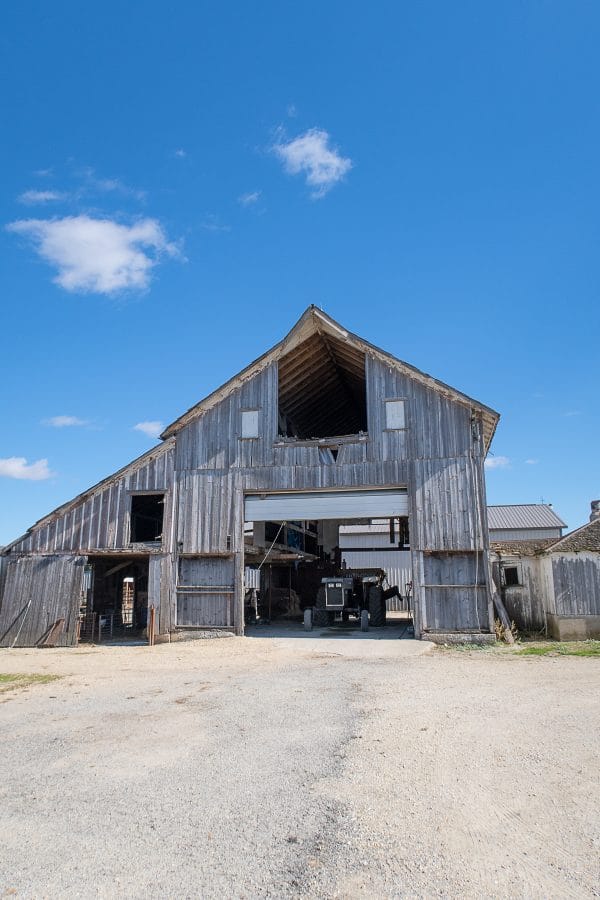 Jenny is a fifth generation livestock farmer! One thing that I have learned through this collaboration with Illinois Farm Families is that many farms are family owned and run by the same families for generations. 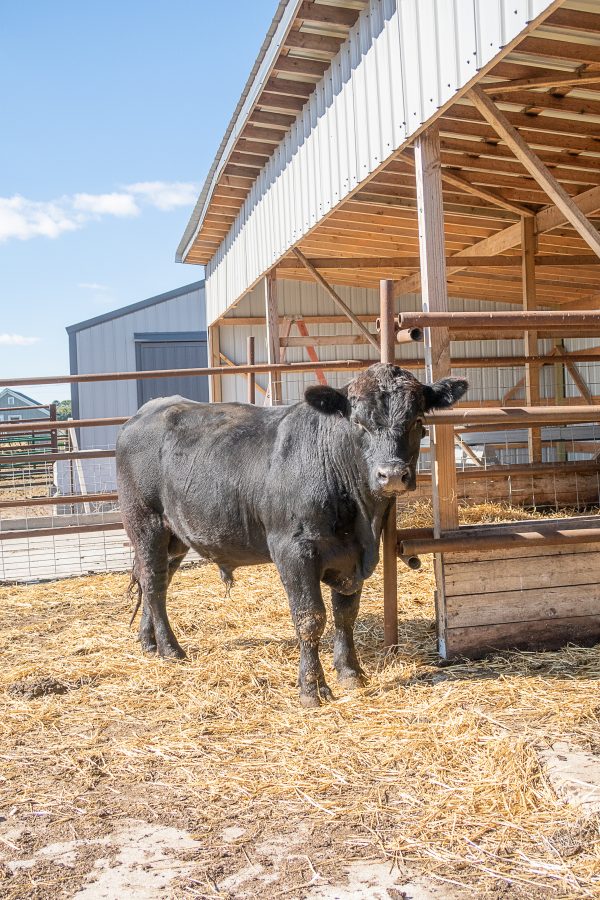 Jenny explained that she purchased the farm she grew up on from her parents because she knew that when she had kids she would want them to grow up like she did – surrounded by animals. 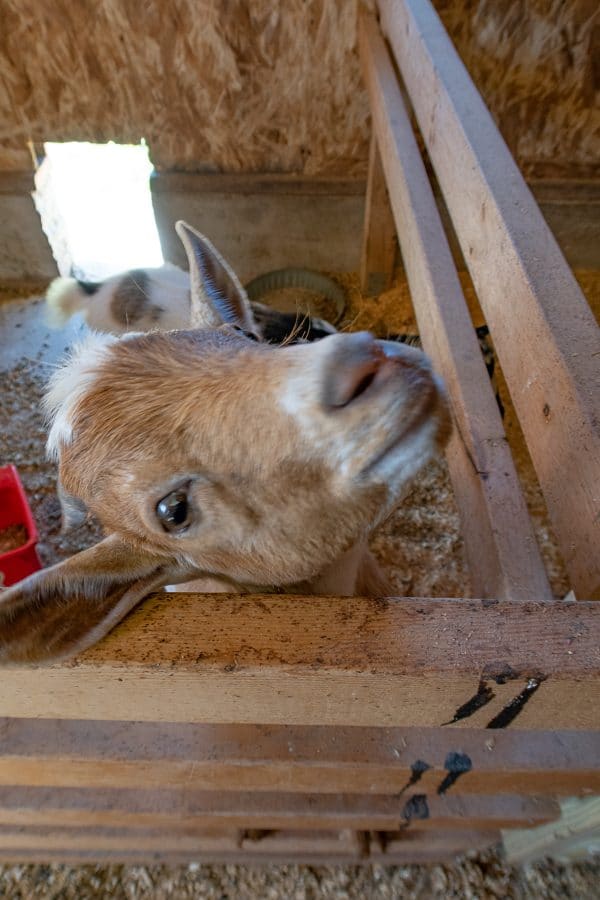 Today Jenny runs the farm with help from her 4-year-old son Owen who excitedly showed us around. Owen was dressed in a buffalo plaid flannel shirt, jeans, cowboy boots, and a John Deere hat – he is dressing the part. Owen takes his role seriously. He wanted to be sure that Pearl the goose wouldn’t wander off, that the piglets born the night before were doing well, and that his five pet goats were happy. 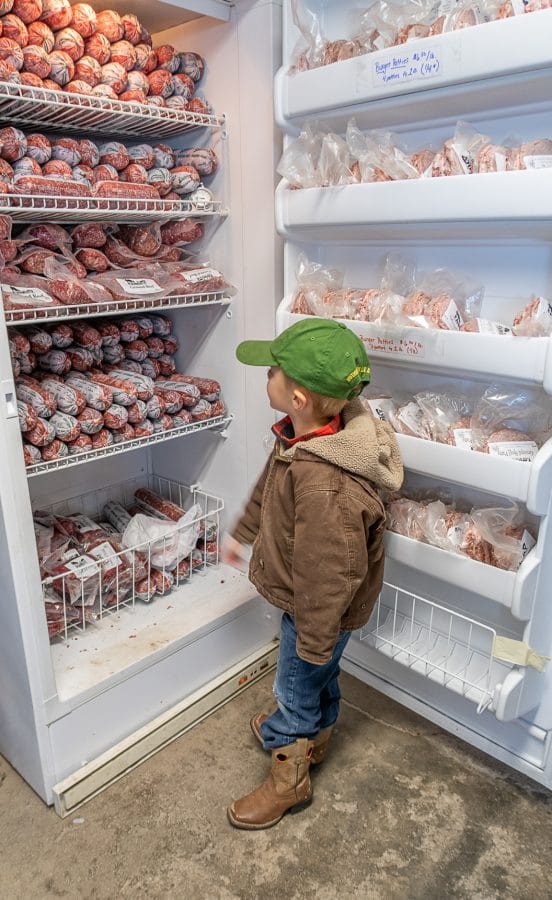 In addition to caring for over 70 animals, Jenny runs a meat store on-site. You can find out more about the store on their Facebook Page. Located in Hinckley, the store sells cuts of beef, pork, and chicken. I used a bone in chuck roast to make my shredded beef tacos. Jenny recommended cooking the roast low and slow, so I took her advice. 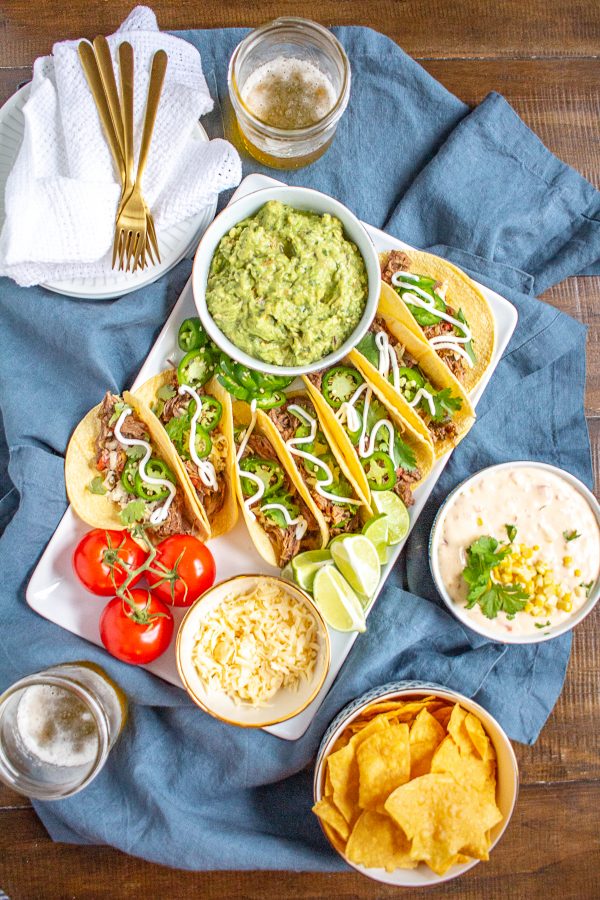 To bring my corn field and cattle farm experiences together in a recipe, I made these slow cooker Shredded Beef Tacos, and served them in corn tortillas. 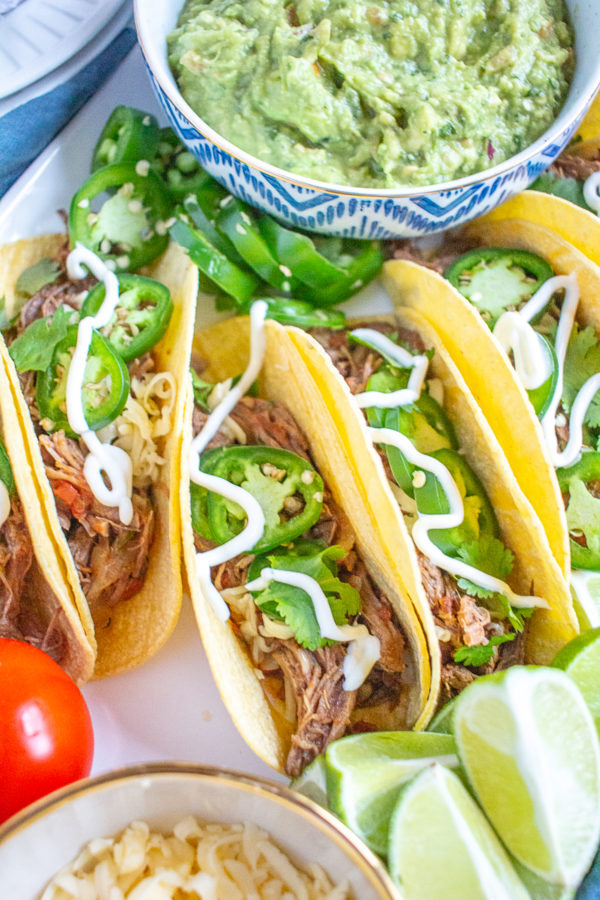 At Larson Farms I learned that field corn, like the corn in the field I visited, is the most commonly grown corn, and it is very different from the sweet corn we are used to eating off the cob. Most field corn is used to make animal feed and other products, but a small percentage is used to make foods like corn tortillas. 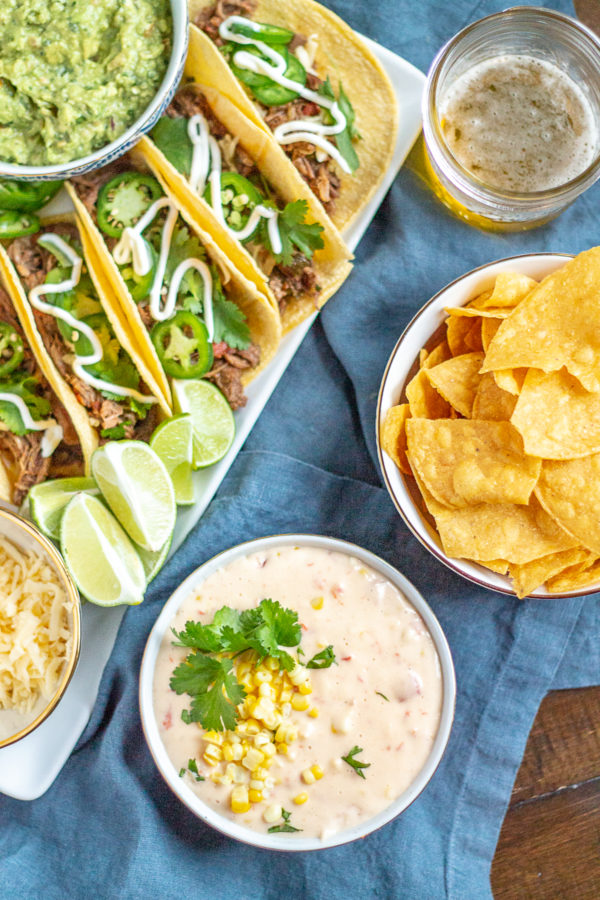 To serve these tacos I filled corn tortillas with a generous amount of the shredded beef and them topped them with some cheese, jalapenos, and sour cream. And I might have added some corn queso on mine. It is a delicious meal that helps to remind me that much of my food is being locally produced. 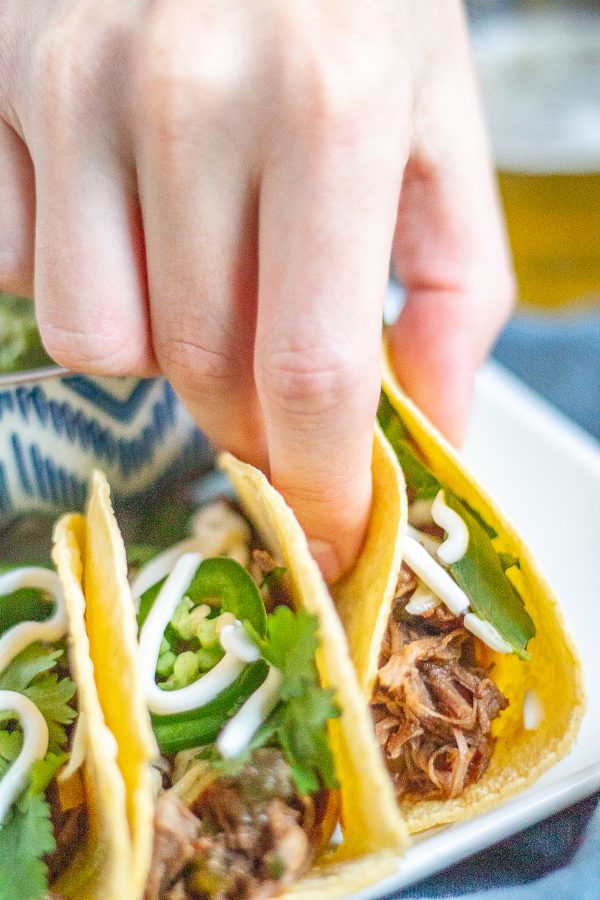 Next add beef broth until it just covers the beef. This is the trick to really tender beef.

Turn the crockpot on to low, and let it work its magic for 6 hours.

After 6 hours, remove the beef from the crockpot, and place in a bowl. Using 2 forks, shred the meat, this is an easy task since the beef is so tender. Remove the bone if there is one.

Use a slotted spoon to scoop the onion, tomatoes, and peppers and some of the juices in the crockpot over the shredded beef.

To assemble the tacos, fill corn tortillas with the beef and add cheese, jalapenos, and sour cream on top.

Want to save this recipe for Slow Cooker Shredded Beef Tacos for later? Here is an image to save on Pinterest: 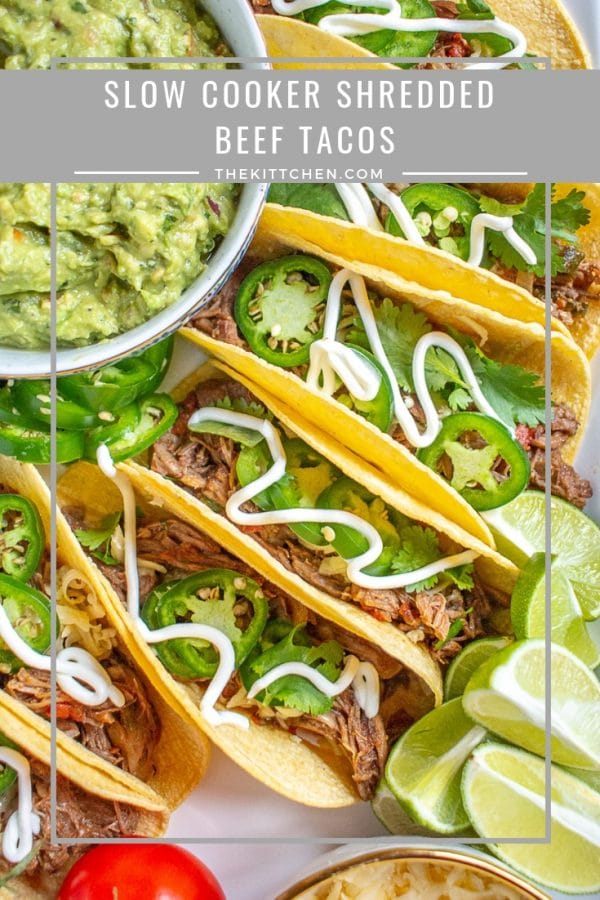 This post was sponsored by Illinois Farm Families®, the opinions expressed are my own.