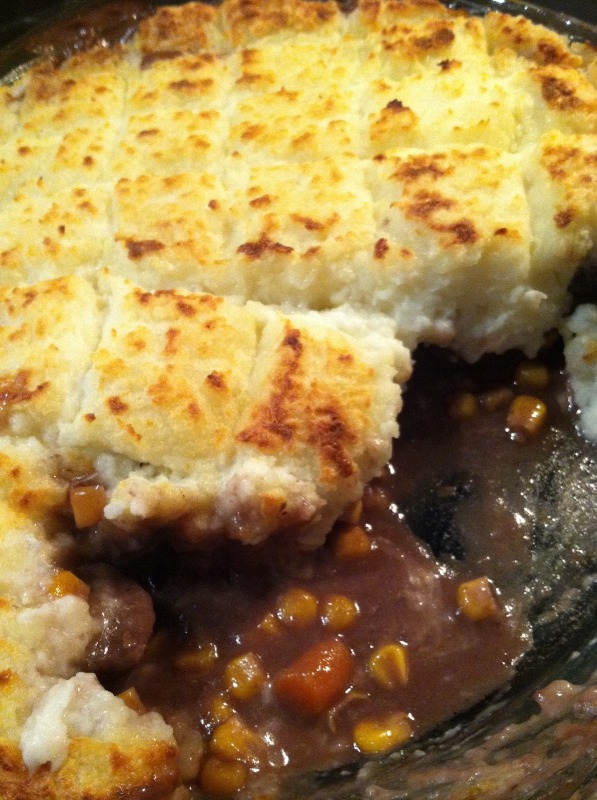 I had lots of leftover baked potato after I made the Buffalo Chicken Baked Potatoes – since I had to scoop out some of the middle of potato.  This inspired me to make Shepard’s Pie.  My fiance is British, so he has had a lot of Shepard’s Pie.  He thought that his was a very classy Shepard’s Pie since I used sirloin instead of ground beef. 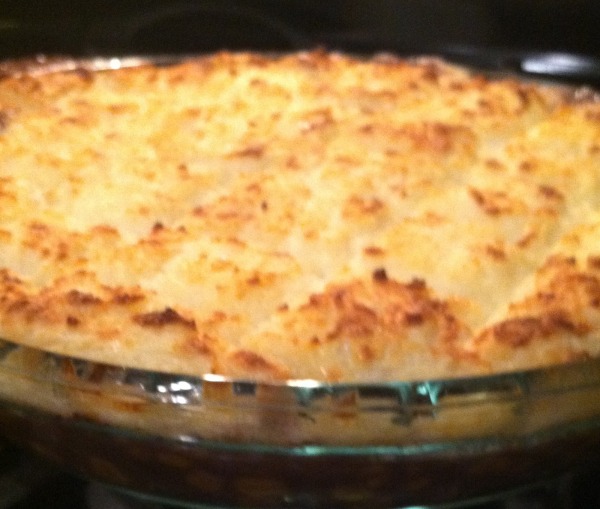 Step 1:
Chop the sirloin into 1 inch pieces.  Pour the flour into a bowl and then season with salt and pepper.  Then toss the meat in the seasoned flour.  In a large pot, melt 1 the butter and add 1 tablespoon olive oil.  Brown the dredged meat in small batches adding more butter and oil if necessary.

Step 2:
Once all the meat is browned, set it aside.  Add 1 tablespoon olive oil to the same pot and add the onions.  Once the onions have browned return the meat to the pot.  Stir in the broth and wine.  Heat until just boiling, then add the carrots and corn.  Let simmer for 2 hours. *You can thicken the mixture by adding 3 tablespoons corn starch, dissolved in an equal amount of water. It will thicken the gravy within 10 minutes.


Step 3:
As the meat simmers, boil the potatoes in a pot until soft.  Then drain, and add the sour cream, cream cheese and chicken broth.  Either combine and mash with a mixer or a fork.


Step 4:
Preheat the oven to 350 degrees.  Then pour the beef and vegetable mixture into a glass pie pan.  Top with the potatoes.  Evenly spread the potatoes out over the top.  Then bake for 30-40 minutes until hot and browned on top.