My sister, Kelly, got married on the 22nd and I took on the role of bachelorette party planner, floral designer, toast giver, dress bustle-r, gopher, and videographer. I captured so many photos of the event, and I received so many sweet messages on Instagram that I thought I would pull everything together into a blog post. 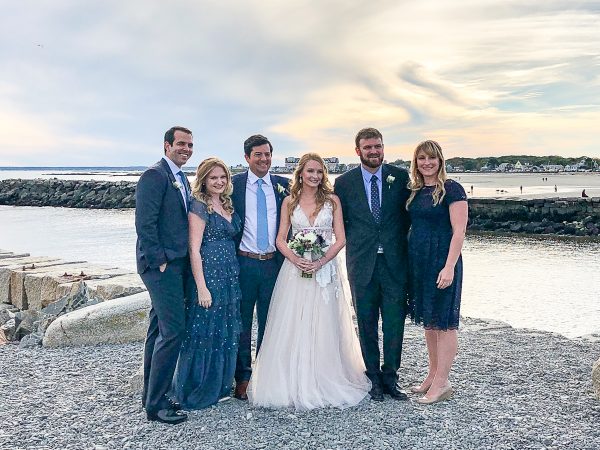 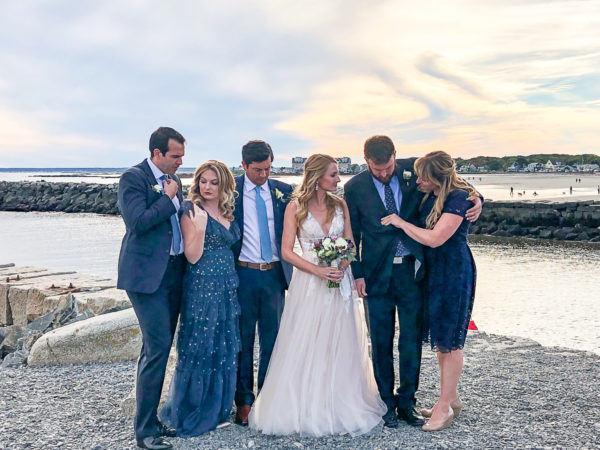 The sun was shining and the air was just starting to feel crisp. The sunlight was dancing over the Kennebunk River making it shine like glitter. The Kennebunk River Club Boathouse, a historic wooden building that stands on stilts above the river had been transformed into a romantic scene filled with flowers, candles, and twinkle lights. 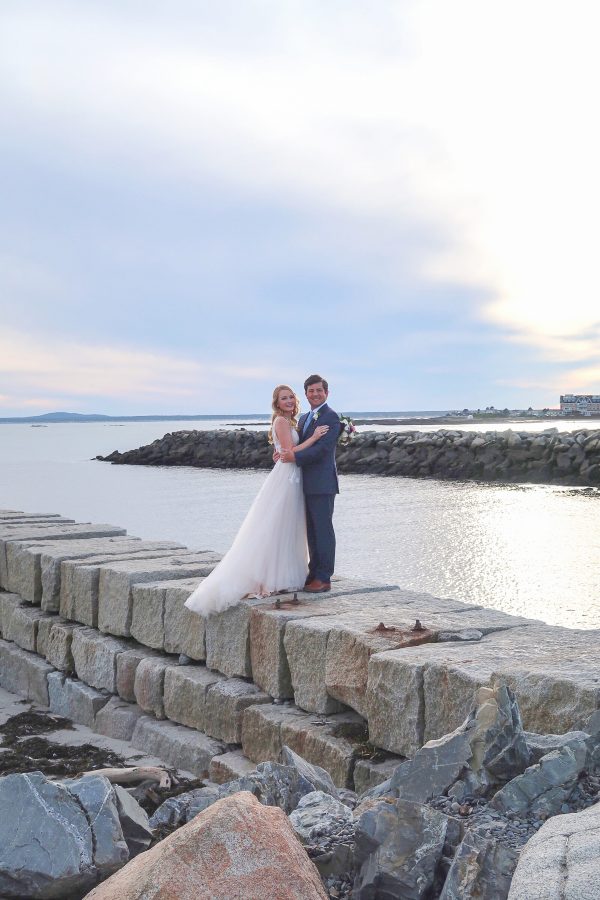 Kelly wanted to get married at the Kennebunk River Club, a private tennis and boating club in our hometown, Kennebunkport. It’s the ideal place for a wedding, and since we grew up spending summers taking tennis lessons and attending events at the club, it has a special place in our hearts. The summers we spent working for a catering company gave us experience decorating the boathouse. And my own wedding at the boathouse, 6 years ago, meant that we already knew most of the wedding vendors. 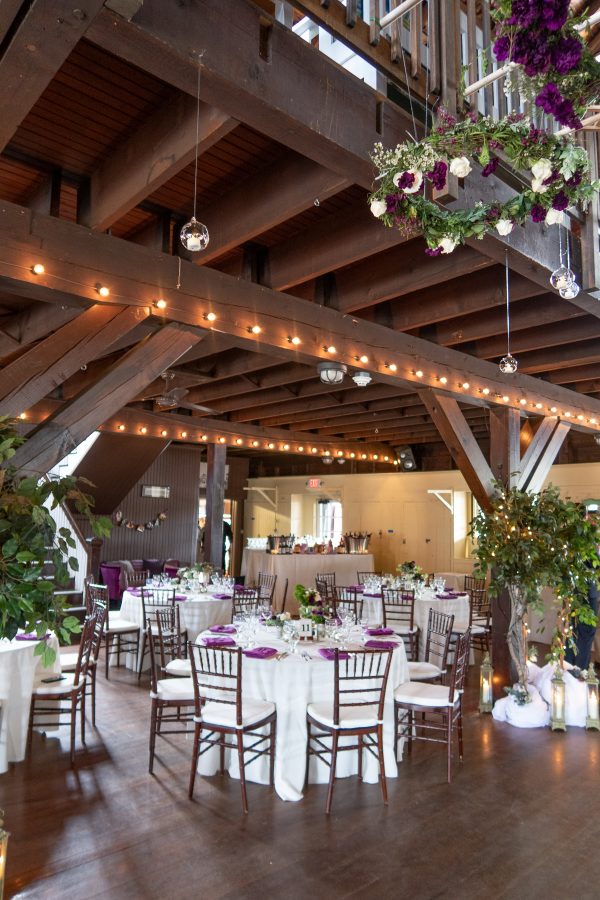 Kelly wanted her wedding to have a different look and feel from all the other weddings we had seen at the club. The boathouse is a large and mostly empty space. It’s been the venue for everything from weddings to themed dinners, disco parties, bingo nights, and birthday parties. The boathouse is a blank canvas ready to be adapted to fit the any occasion. 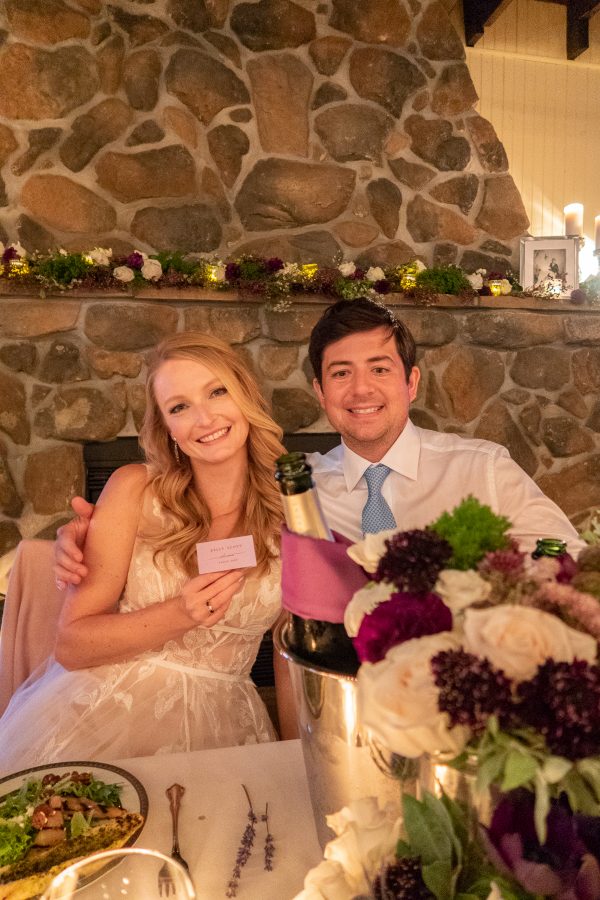 Kelly wanted the space to feel formal and romantic. She brought in flowers, trees, and twinkle lights to transform the space into a romantic wonderland. The catering team, who has been catering events at the club for decades, said that they had never seen the space so dressed up. Instead of hiring an event planner and floral designer, we did all that work ourselves – luckily it wasn’t our first rodeo – Kelly, Jeff, and I spent several summers when we were in college working for a catering company that did weddings almost every weekend all summer long. We had some experience in dressing up the space – but usually a florist was part of the team. This was our first, and likely last, venture into floral design. 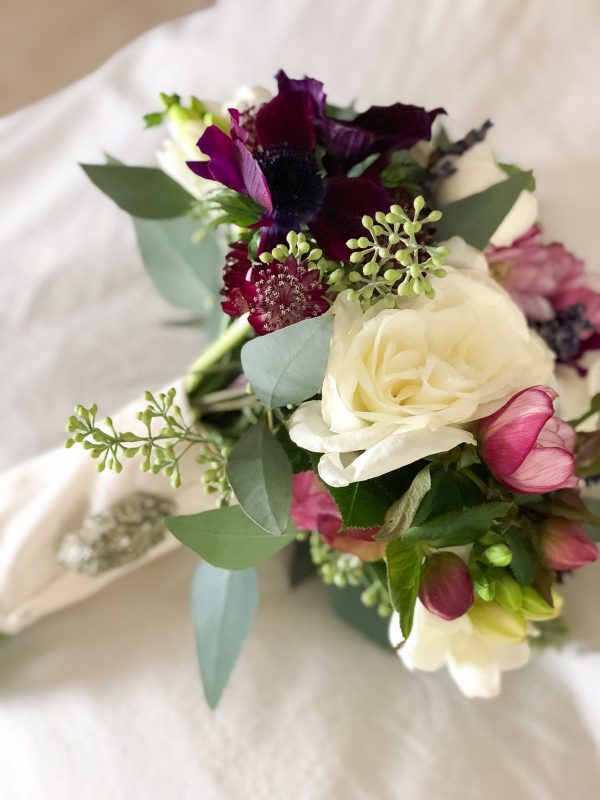 In order to get the most flowers for her budget, Kelly purchased all of the flowers (except the boutonnieres and her bouquet) at the flower market in New York City. Kelly lives in NYC, and she rented a box truck, filled it with flowers, and then her fiancé drove it up to Maine. This was a strategic decision that meant that she could get more flowers for her money… and she got a lot of flowers. 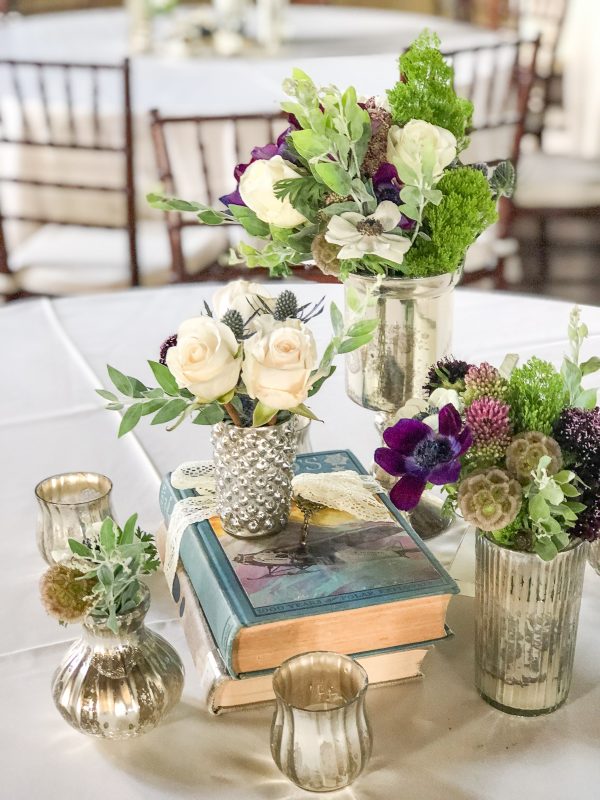 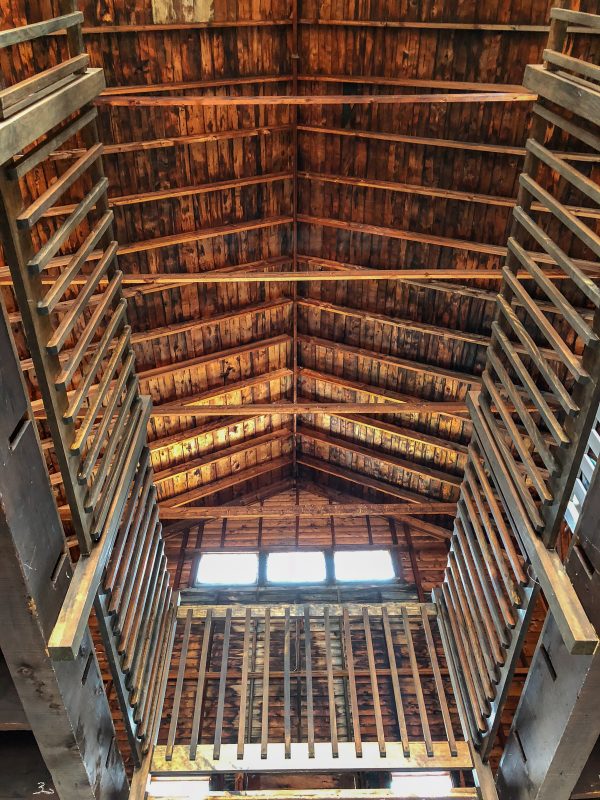 There is a large opening in the ceiling between the first and second floors of the boathouse where boats used to be lowered down. Kelly decided to fill that space with five large floral wreaths, which I was put in charge of designing. 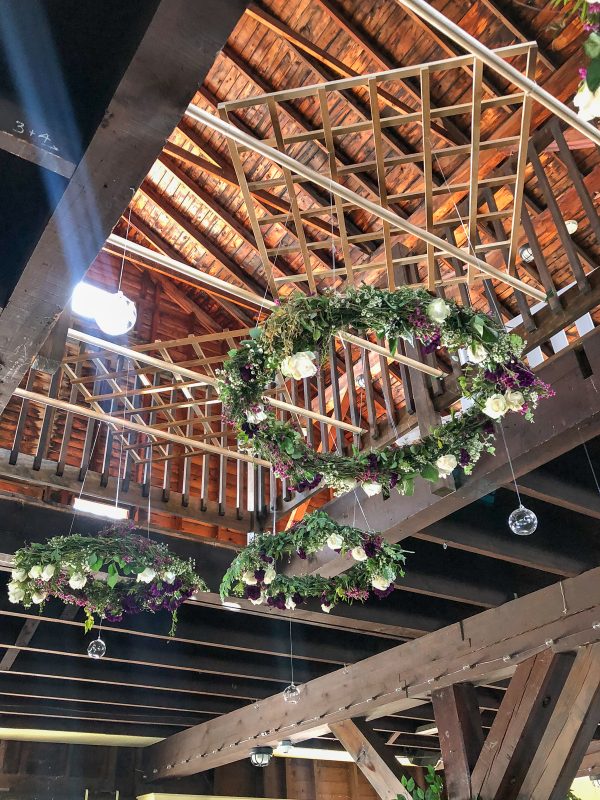 We started with a wire structure and which I covered with greens and small white and purple wax flowers. I secured these with florist wire. 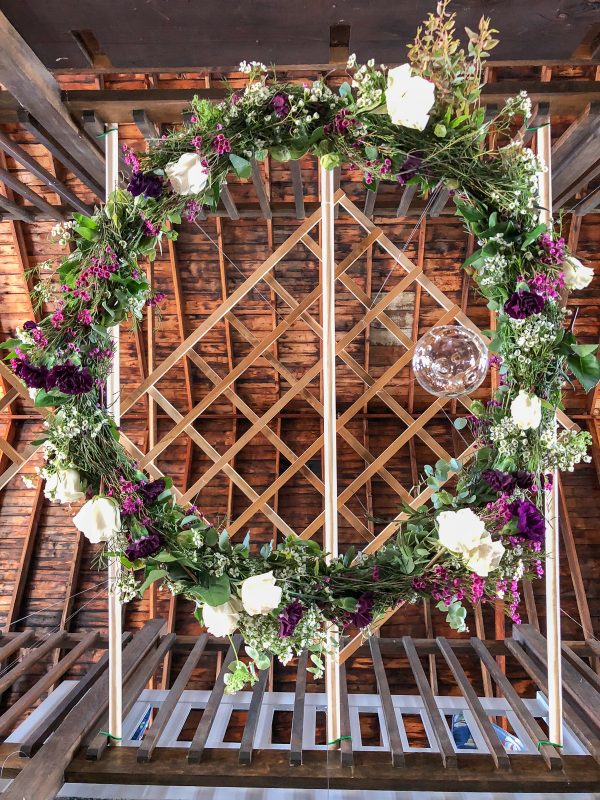 Then I added white roses and deep purple carnations. The wreaths were hung from the opening in the ceiling, along with some lights. 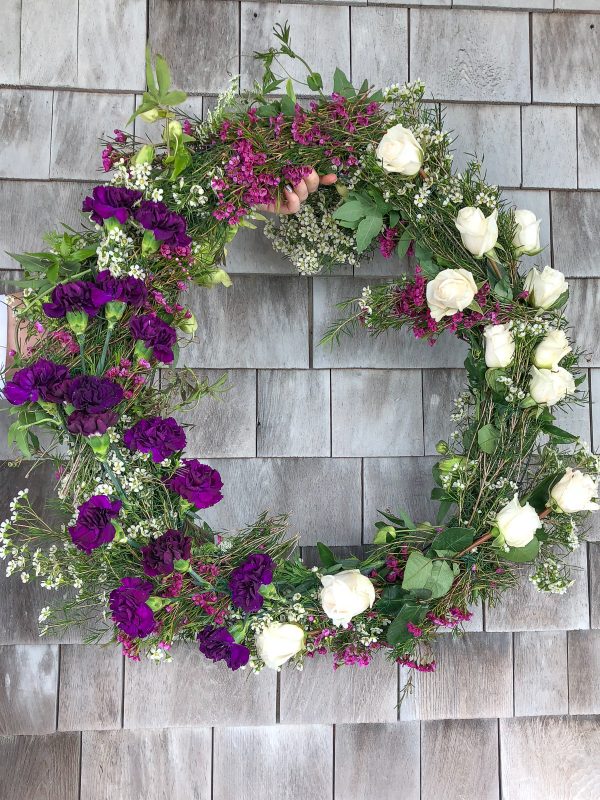 After the wedding the wreaths were taken to my sister, my brother, and my brother’s home where they are being dried out and used to decorate their homes. 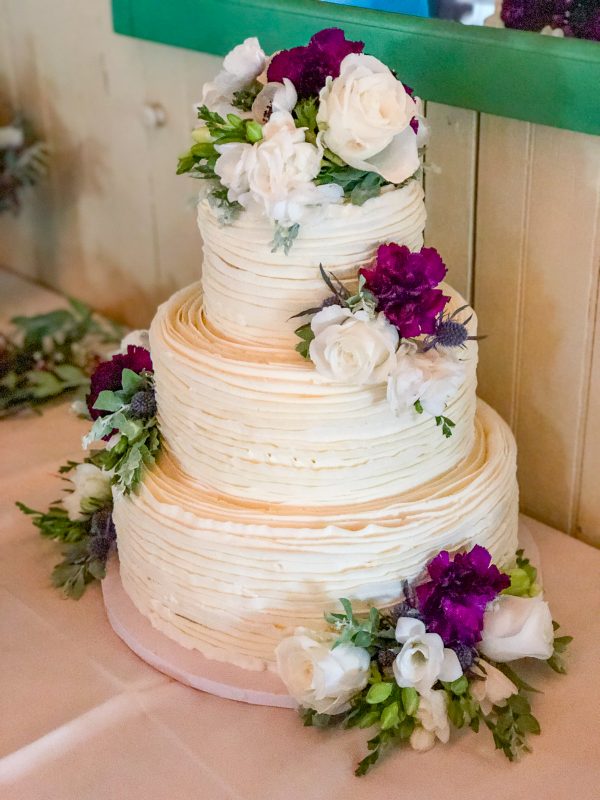 I was also tasked with putting together flowers to decorate the wedding cake. 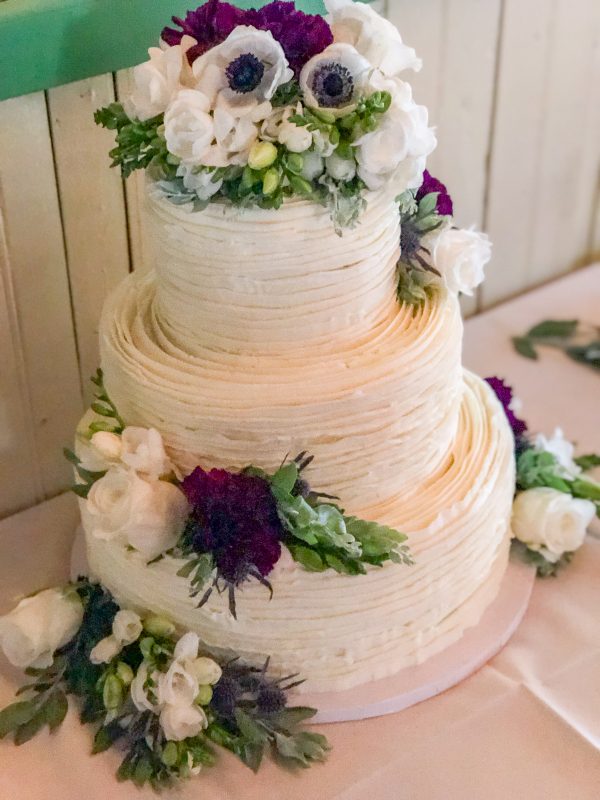 I used florist tape to tie small groupings of flowers together, and then once the cake was delivered the flowers were placed on the different tiers of the cake. 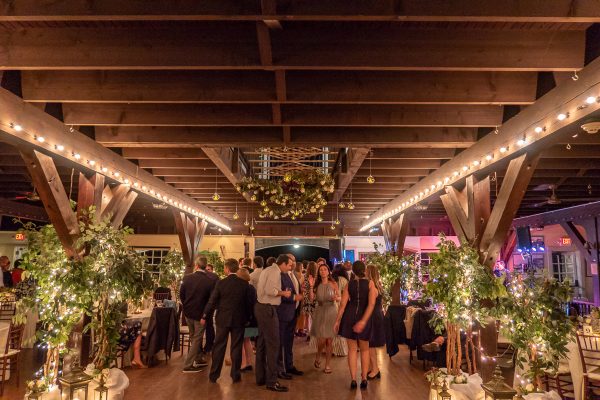 Trees strung with twinkle lights helped to complete the space, along with lanterns filled with candles. 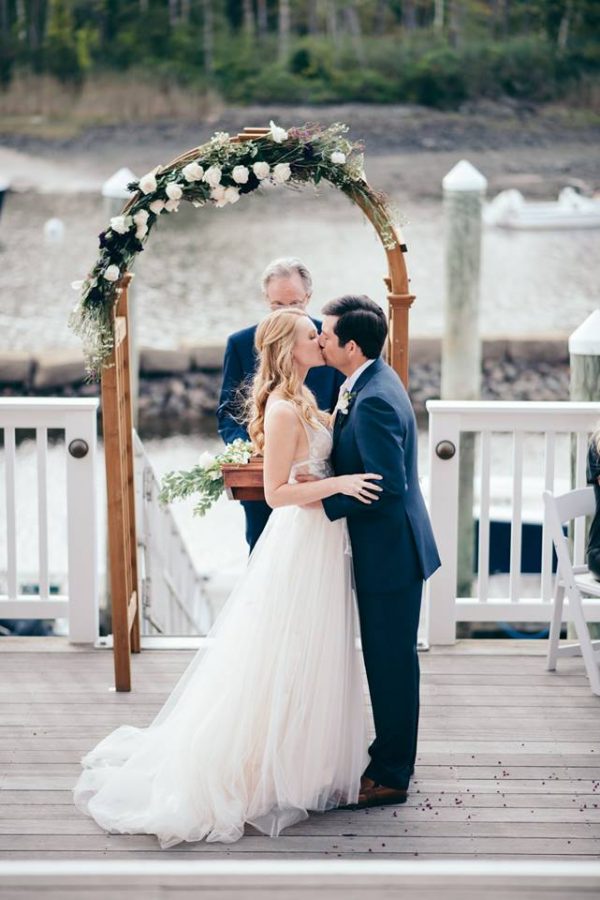 Extra flowers were used to decorate the arbor and podium where the ceremony took place (above photo by Molly & Victoria Co.). It took about 2 days to put everything together. In the end Kelly said that everything looked just the way she had hoped. 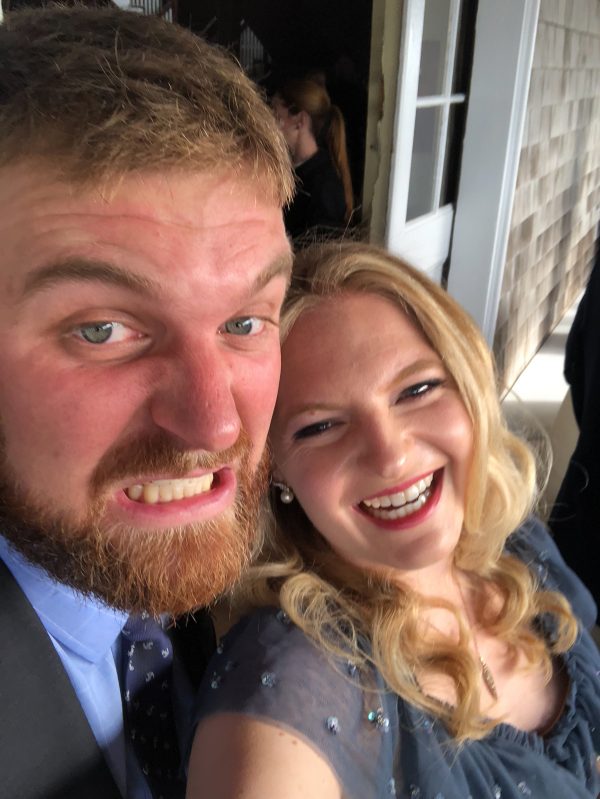 My brother (who doesn’t like selfies) and I were asked to give a speech, and I struggled with writer’s block and had a hard time nailing down what I wanted to say. We came up with a touching yet funny speech at the last minute, and when my brother lost his voice it provided comic relief. He was saying the sweetest things, with the gruffest most emotionless delivery, and it received a lot of laughs. It was a hit, and we were relieved. 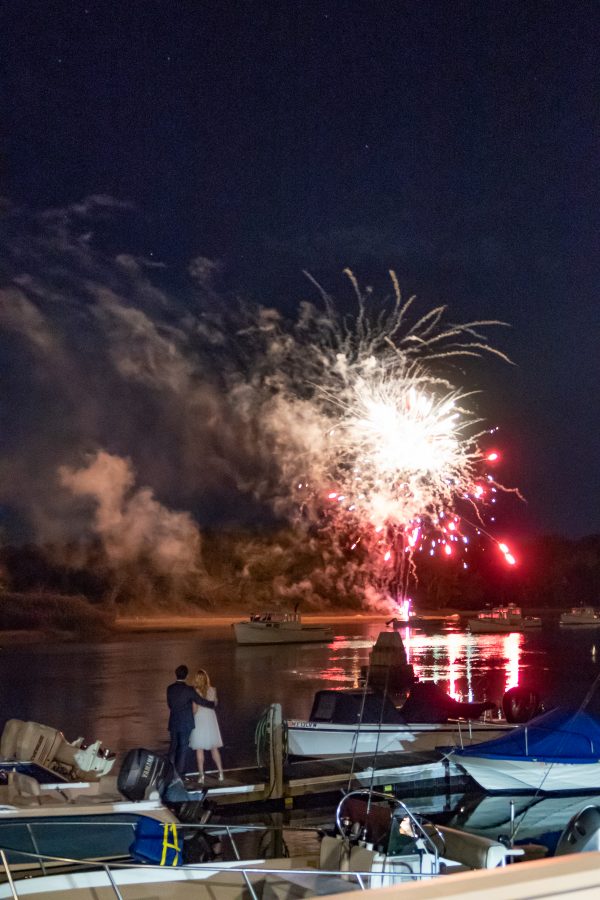 The evening ended with fireworks. It was a magical night and the Graham Family is so excited to welcome Kelly’s new husband, Andrew, into the family. 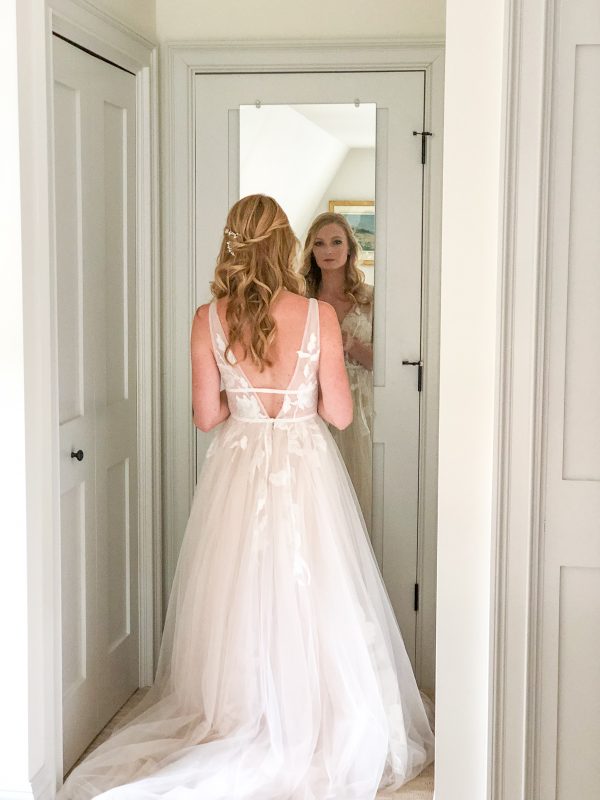 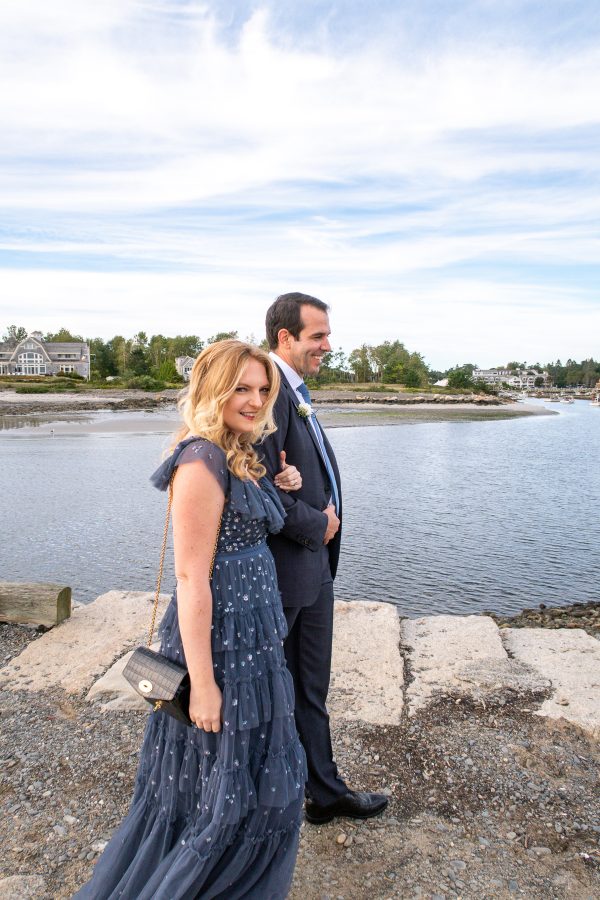 My dress was a past season Needle and Thread for BLHDN dress that I discovered online, fell in love with, and found on Poshmark. I owe Joy Cleaners on North Avenue in Chicago a huge thank you for altering it in just 5 days.

The professional photographers were Molly & Victoria Co. but most of the images above are my own – we have only gotten a couple sneak peak photos so far. 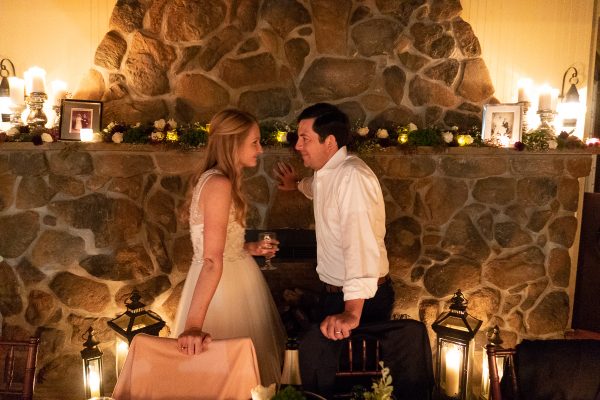 I captured video throughout the night using my small travel camera, a Canon Powershot G7X Mark ii and I love how the video came out. The camera also did a wonderful job of taking photos in low light during the reception. I have found that this is a better low light camera than my DSLR. And it is wifi enabled so I can easily transfer the images to my phone to share on social media. Some of the photos in this post were taken with that camera (including the above photo), while others were on my iPhone.