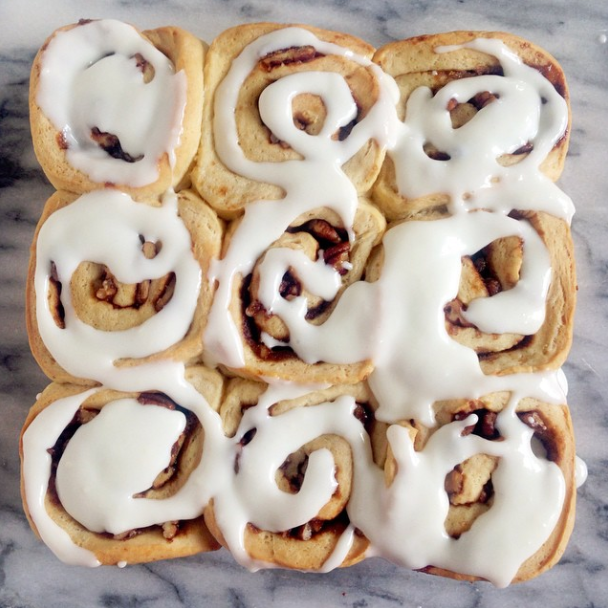 Warm, fresh out of the oven, cinnamon rolls covered in cream cheese icing is one of the most decadent breakfasts. I updated classic cinnamon rolls by adding pecans toasted in maple syrup to create Maple Pecan Cinnamon Rolls. Adding the maple glazed pecans is really simple- they just get spread out and added to the cinnamon rolls along with the cinnamon before the dough is rolled up.

Cinnamon rolls are a great breakfast to make for when you have house guests. You could prepare the dough the night before, and let it rise, and then bake the cinnamon rolls in the morning so that your guests can have warm gooey breakfast. The dough is very easy to prepare, you just need to be patient and give it time to rise – it isn’t a quick process, but it is worth the time. 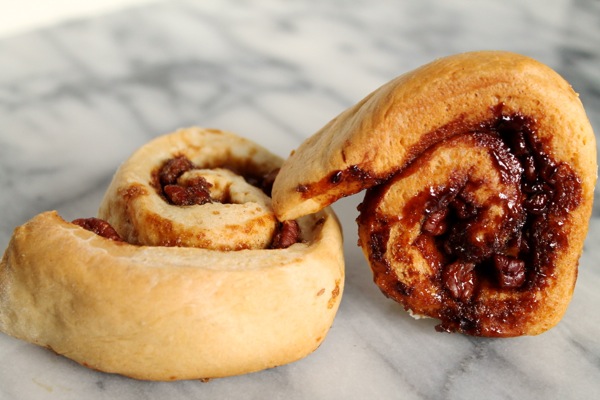 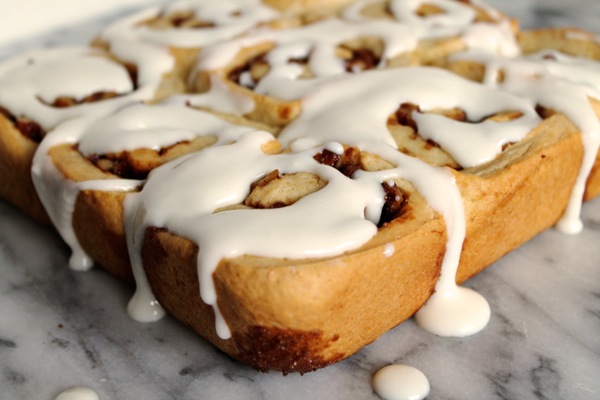 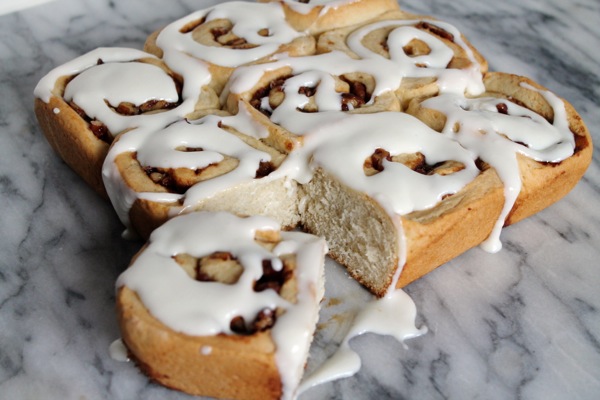 Step 1:
Melt 3 tablespoons Butter and then combine the butter and almond milk in a bowl. Stir and then let cool to 110 degrees – this step is important because if the milk is too hot it will kill the yeast and the dough won’t rise.

Step 2:
Once the milk has cooled to 110 degrees, sprinkle the yeast over. Let sit for 10 minutes so that the yeast activates.

Step 3:
Add the flour to the to the milk 1/2 cup at a time. Once the dough it too think to stir, remove it from the bowl and knead the flour into the dough. Flour the surface before kneading to prevent sticking.

Step 4:
Grease a bowl with a bit of grapeseed oil or butter. Place the dough in the bowl, cover with plastic wrap, and let it sit until it rises and doubles in size. This will take about 1 hour.

Step 5:
Preheat the oven to 350 degrees. Roll the dough out into a large rectangle about 1/4 inch thick on a floured service. Melt 1 tablespoon butter and brush it over the dough.

Step 6:
Melt 1 tablespoon butter in a skillet, add the maple syrup, salt, and the pecans. Toast for 2 minutes over medium low heat, stirring frequently. Then evenly pour over the dough.

Step 7:
Sprinkle the brown sugar over. The roll the dough, do this by rolling the long edge of the dough to create a long cylindrical piece of dough.

Step 8:
Butter a 9×13 inch baking dish. Then slice the dough into 2 inch pieces and then add them to the baking dish. Then bake for 25-30 minutes, until the top had browned and a toothpick inserted into the cinnamon rolls comes out clean.

Step 9:
To prepare the frosting, use a mixer to combine the cream cheese, powdered sugar, milk, and vanilla. Drizzle the frosting over the cinnamon rolls.

Inspired by The Minimalist Baker