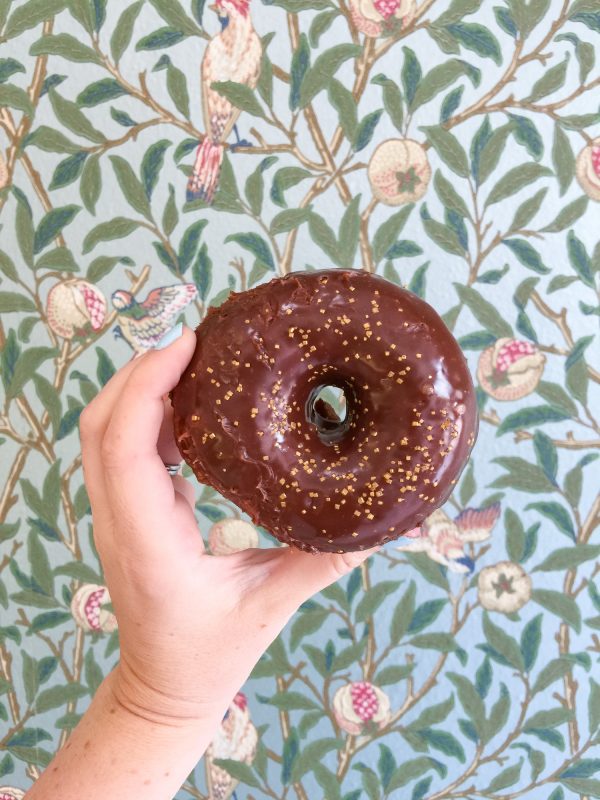 I instantly said “yes” when I was asked to judge the Wisconsin Milk Marking Board’s Grilled Cheese Showdown in Madison. I love grilled cheese, and I had been looking for an excuse to visit Madison. Instead of just going up for the day, I took a two-day trip so that I could explore Madison, and I was surprised by how much I liked the city. 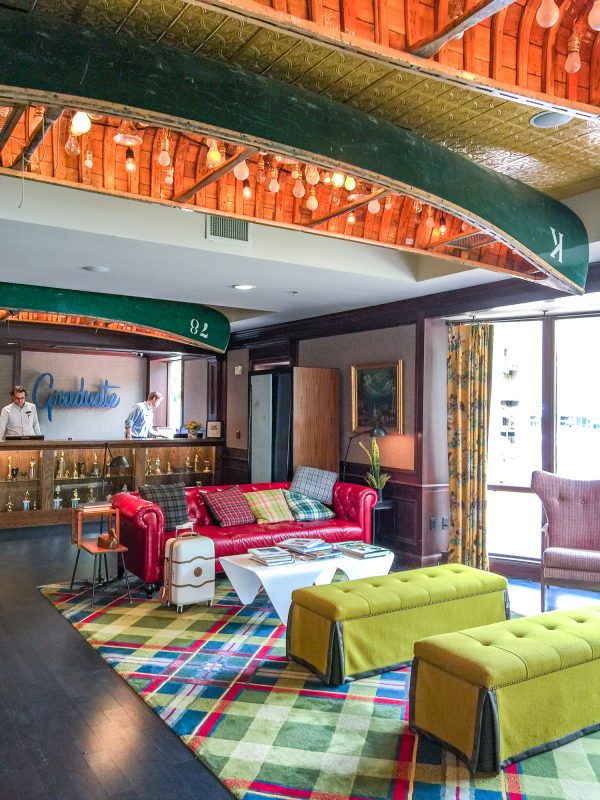 Madison is just about 3 hours from Chicago, but since I don’t really drive, I took a bus which took 3 ½ hours. The bus dropped me off on the University of Wisconsin campus – it was super convenient since my hotel was only 2 blocks from the bus stop. I stayed at the newly opened Graduate Hotel. 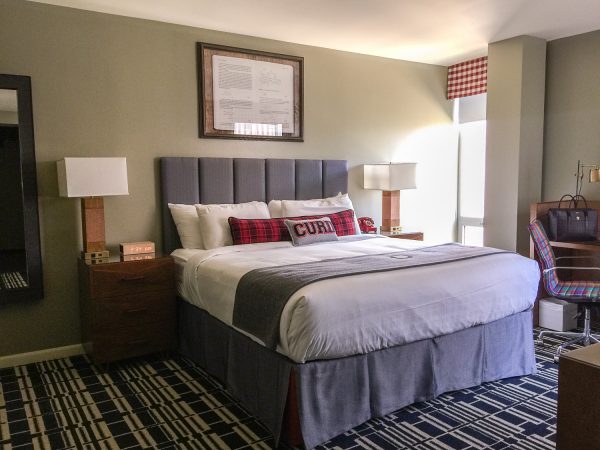 I loved the camp-meets-college décor of the hotel, and rooms were very affordable – our “suite” was $230 and had a king sized bed in addition to a futon which was in a small room with a tv and a play station. There were some kinks when it came to the service at the hotel, I asked the staff of make up the futon so someone could sleep on it, and they just put a sheet on top of the futon. No pillow, no blanket, just a sheet, so I had to make an awkward call to the front desk. 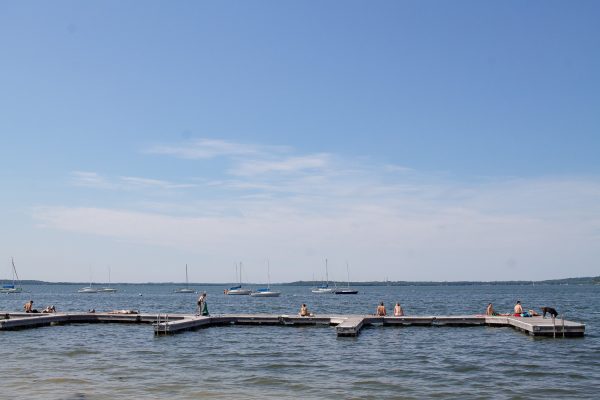 After I checked into the hotel it was time to explore! I was traveling with Ashlee and Christine – two amazing women who work behind the scenes for The Kittchen and the Windy City Blogger Collective. Ashlee and I kept saying that we were surprised by how beautiful Madison is! Downtown Madison sits on a narrow piece of land that sits between two lakes so you are always near the water. 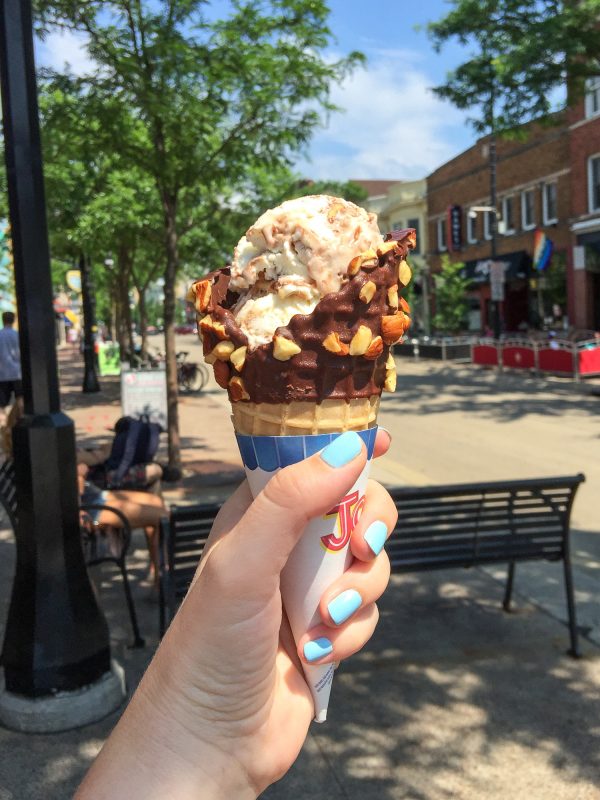 Christine had been to Madison before and she showed us around. We walked down State Street stopping to get ice cream at Chocolate Shoppe Ice Cream, a family owned ice cream parlor that has been open since 1962. Their flavors are all pretty indulgent with toppings mixed it. I had the turtle flavor which had chocolate and caramel swirled in. It was so hot that it was a challenge to eat it before it melted!

The shops on State Street definitely have a college vibe. Tailgate and Don’t Ask Why are a pair of shops in one space with a coffee shop in the middle. Tailgate is filled with vintage style University of Wisconsin gear. Don’t Ask Why sells clothing fit for a summer music festival. Further down the street, Anthology had amazing paper products and lots of clever politically inspired buttons. I couldn’t help by scoop up a few buttons to give to friends and family. 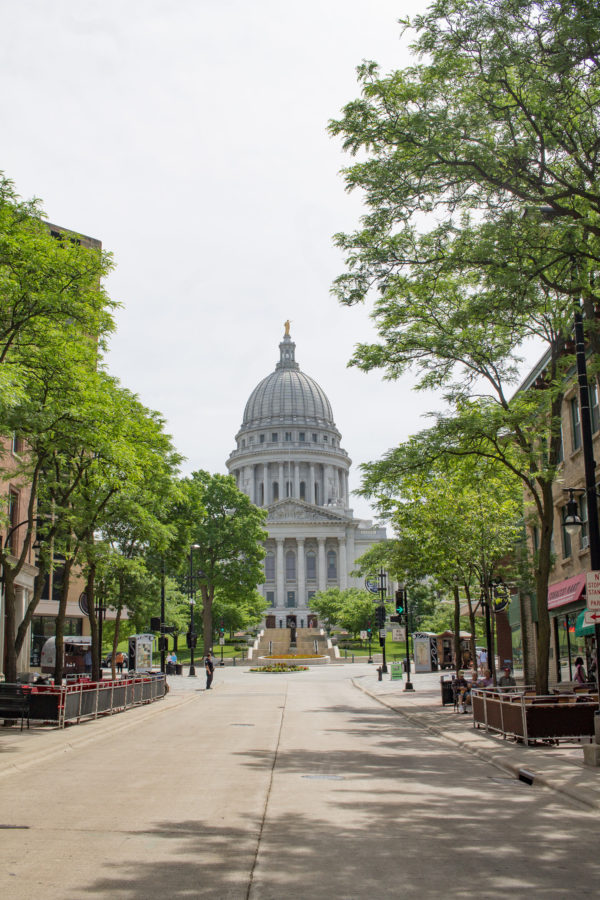 We continued walking down State Street until we reached the Capital Building, which seems simply massive compared to everything else in Madison. 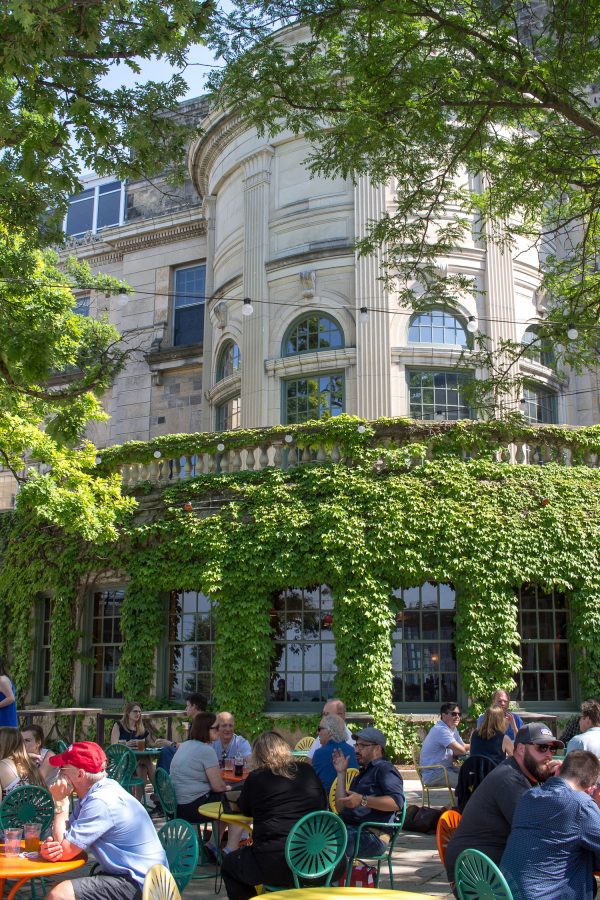 Next, we walked over The Terrace, an outdoor restaurant beside the lake with brightly colored chairs. 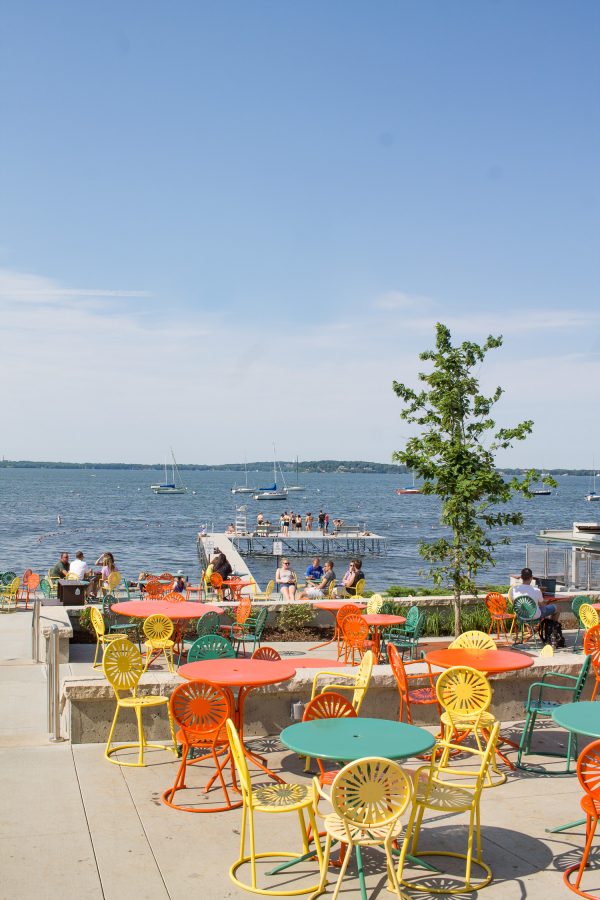 It overlooks a public pier where people were sunbathing and jumping into the lake – I can only assume that the lake was pretty cold. A frat house nearby was blasting Mumford and Sons. The area definitely had a relaxed school is out for summer vibe. 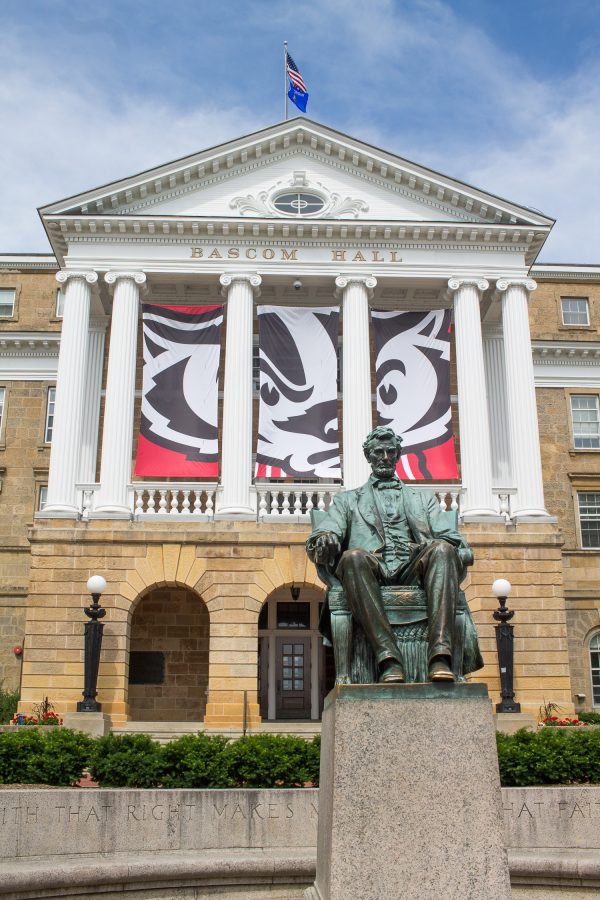 As we walked past giant fraternity and sorority houses and beautiful buildings on campus I did start to question why I decided to go to a small college that regularly tops the list of ugliest campuses in America. 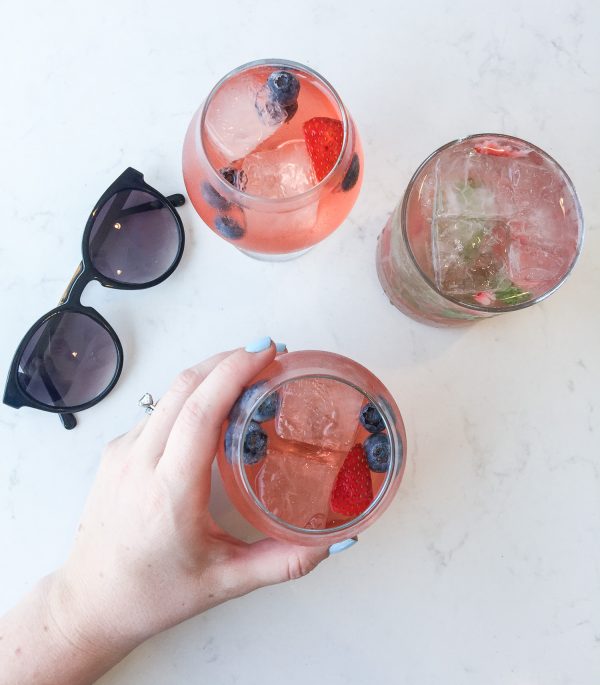 That night we embarced on a food crawl. We started at The Blind Madison, a rooftop bar at the Graduate Hotel that had been recommended. They say it is a rooftop bar, but it is really on the top floor of the hotel – it isn’t an open-air space. But it was a great place to have rose sangria and fried cheese curds to kick off our evening. 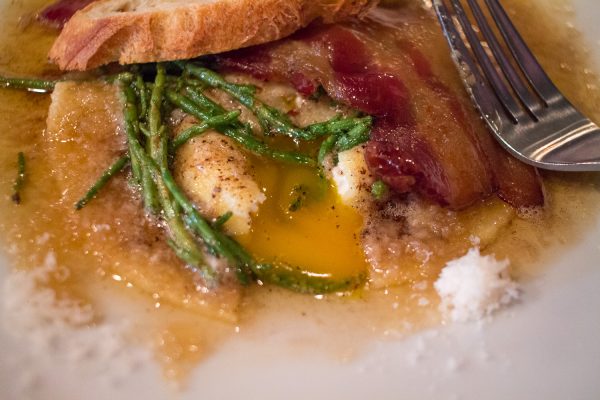 After happy hour cocktails, we set off on foot and walked along the lake to A Pig in a Fur Coat, a trendy spot serving up sophisticated modern American cuisine. The stand out menu item that we tasted was a raviolo filled with ricotta cheese and egg yolk that was covered in a rich brown butter sauce. 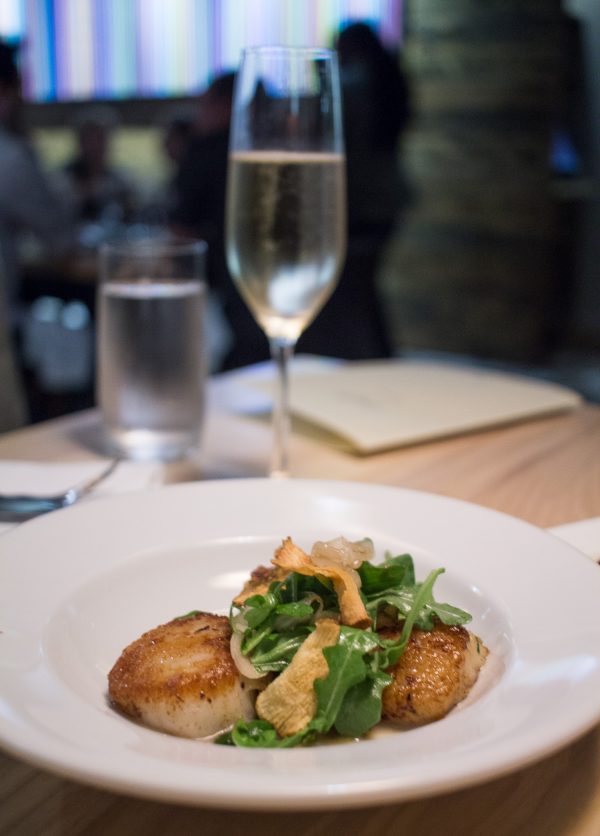 Next, we walked back towards the Capital Building (and our hotel) to Graft. The walk from A Pig in a Fur Coat to Graft took about 25 minutes and was enough to help us feel hungry again. Graft is a larger restaurant that sits beside the Capital Building and specializes in small plates. We had fried goat cheese with honey, an oyster po-boy, scallops, and the most amazing short rib with a port wine sauce. 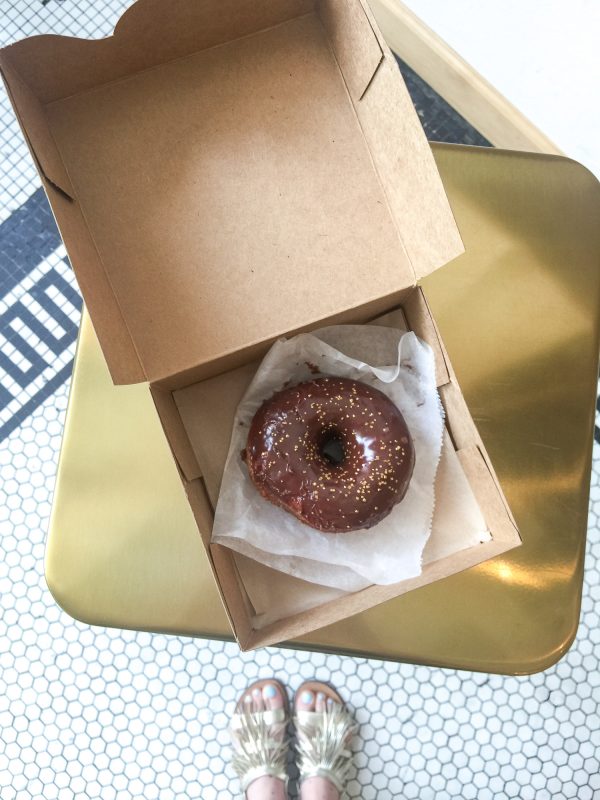 The next morning, we headed to Dough Baby for doughnuts. I had a cream cheese cake doughnut topped with chocolate ganache and golden sprinkles. 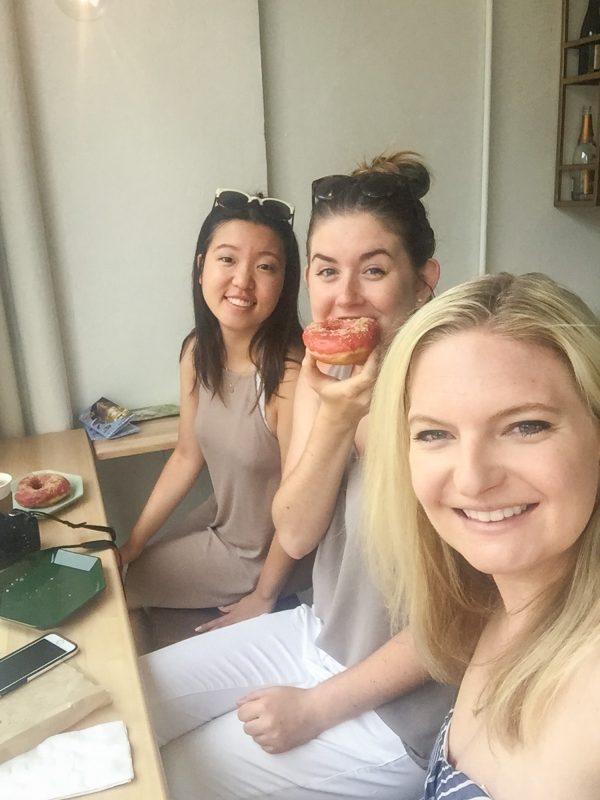 It was rich, indulgent, very filling, and perhaps a bit too much to be eating before judging a grilled cheese competition. At the same time, I didn’t regret it. I loved that doughnut. 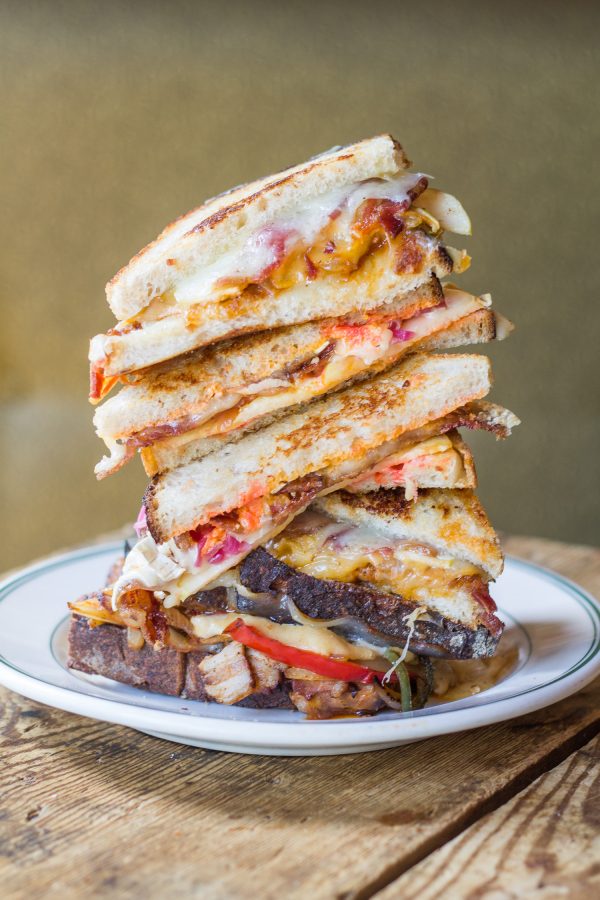 I slowly made my way to The Old Fashioned for the grilled cheese judging, stopping at Michelangelo’s Coffee along the way. It was really hot, and a blackberry ice tea was just what I needed to cool off. 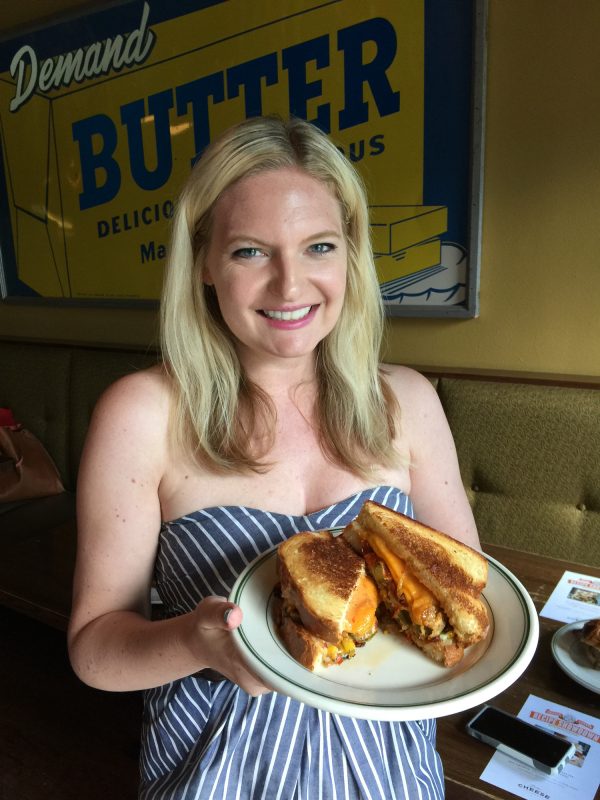 While I was tasting 10 grilled cheese sandwiches at The Old Fashioned, Ashlee and Christine went to Bassett Street Brunch Club for brunch and they loved it. I am definitely adding it to my list of places to check out next time I am in Madison.

Two days in Madison was not nearly enough. I definitely need to go back – and on a weekend because I hear that the farmer’s market is one of the best in the country. Have you been to Madison? Do you have recommendations? I would love to hear them! 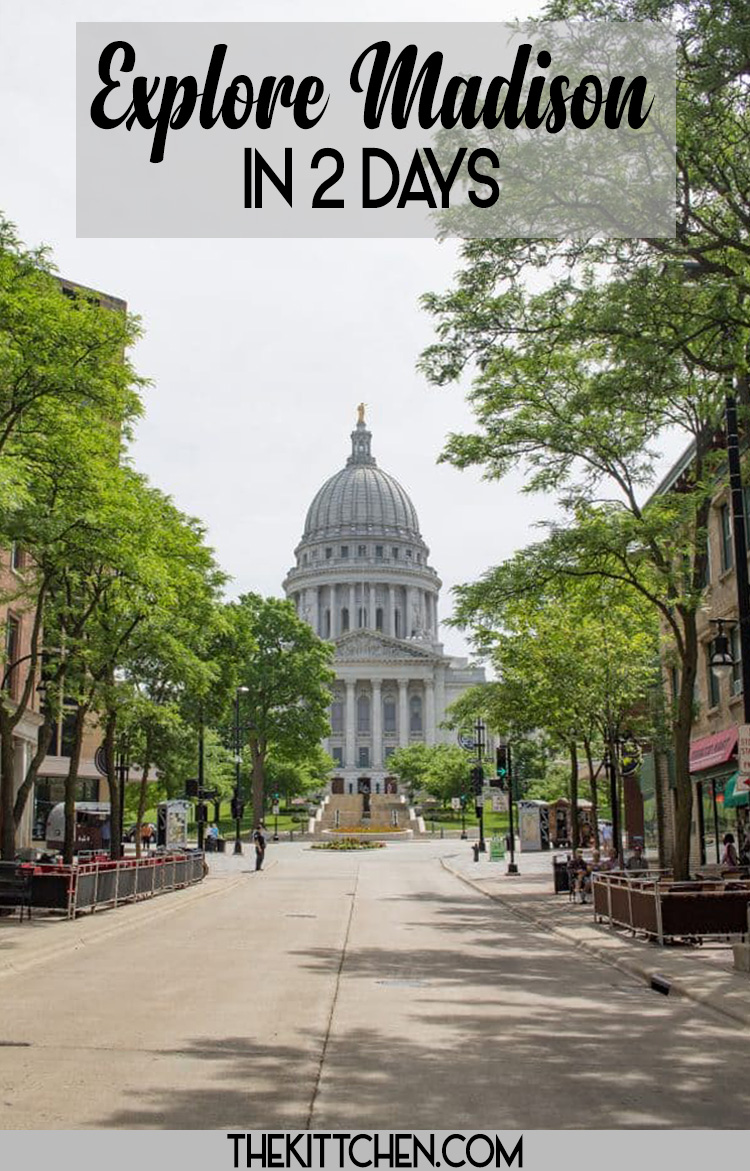 Yayyyy! So glad you had a great time!

It was a blast!

So glad you made it to Dough Baby -- love their sweets and their employees!