My recipe for Chicken Soup with Butternut Squash, Barley, and Kale brings together fall flavors in a healthy and hearty soup that your family is sure to love. 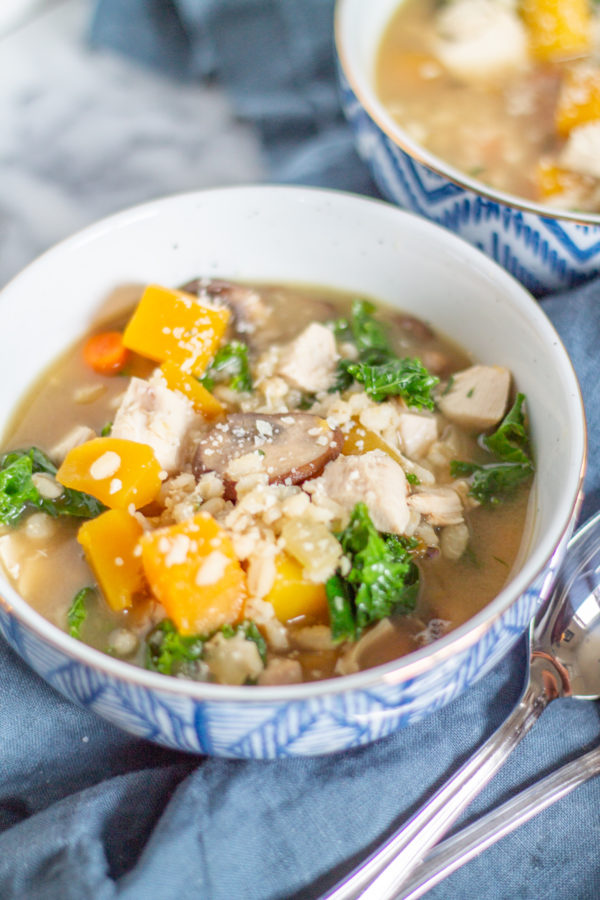 Charles loves soup more than anyone I have ever met. I often make soup for him before I head out of town so that I know he will have something healthy to eat while I am away. Before I went to Finland I prepared a batch of this Chicken Soup with Butternut Squash, Barley, and Kale. It’s a hearty soup that is perfect for a chilly fall night. 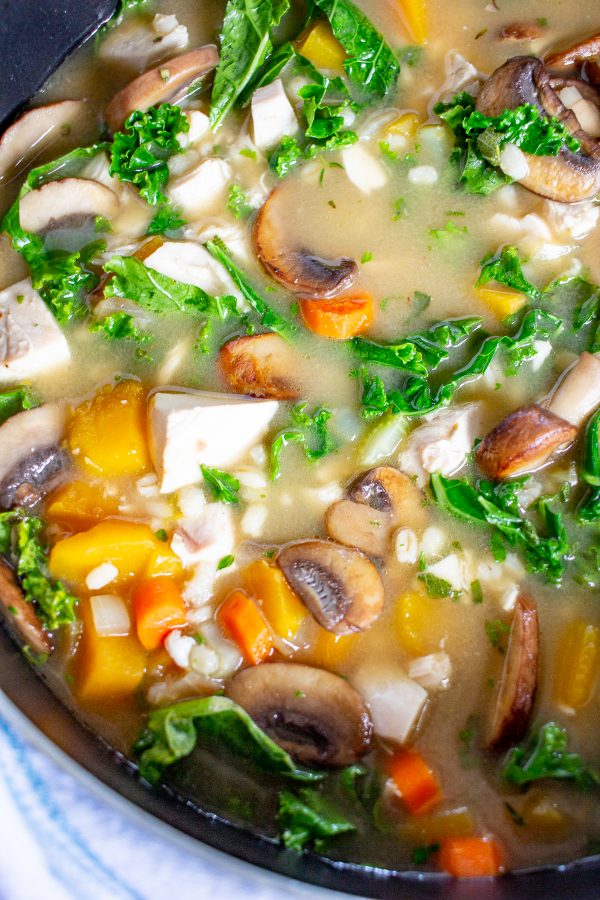 There are two types of barley – but your grocery store may not have both. Sometimes I can find a barley that cooks in just 5 minutes. The other option is to use a traditional barley that takes about 40 minutes to cook in the broth. It is important to know that barley soaks up a lot of broth as it cooks, and it will continue to soak up broth and thicken the soup as it sits in your refrigerator. A little bit of barley goes a long way, if you add too much you don’t have much broth left. 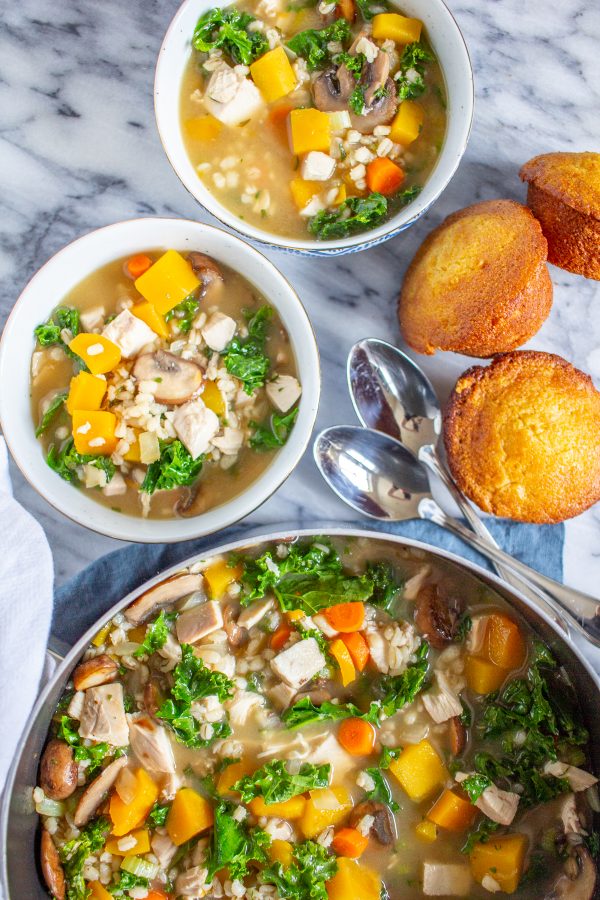 My trick to making extra flavorful broth is to make it from scratch using the chicken bones, and to add in any extra gravy that you might have. I also like to throw in a parmesan rind – I often stock pile these in my freezer. 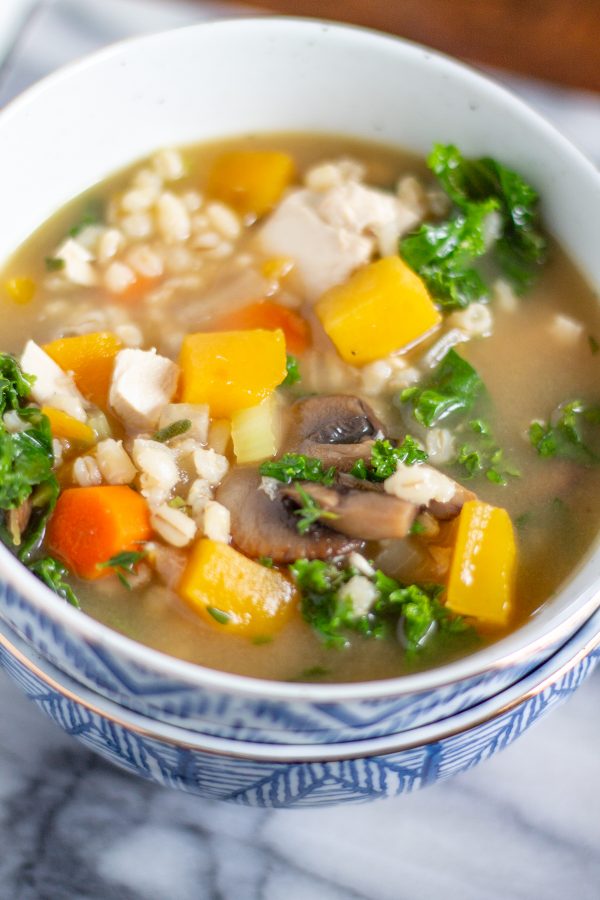 I like to add the kale at the last minute, only letting it simmer in the stock for about 2 minutes. This keeps it a little crispy and I love the texture it gives the soup. 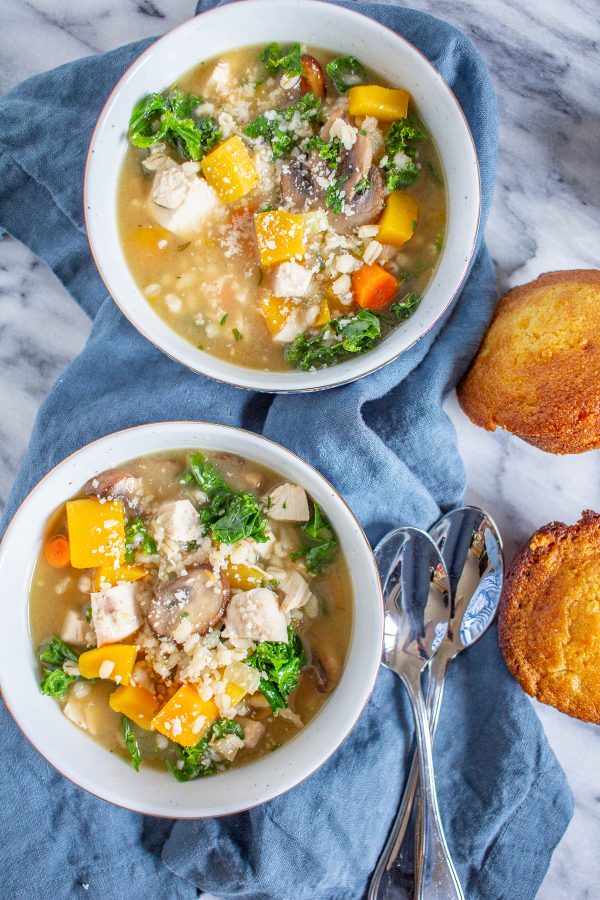 I made one giant pot of this soup and then left for six days in Finland. When I returned to Chicago my home smelled like chicken soup, it was like my apartment was welcoming me. Apparently Charles ate soup for nearly every meal while I was away. It is certainly healthier than living off of pizza.

How to make Chicken Soup with Butternut Squash, Barley, and Kale:

Pour the stock into a large pot, and bring to a simmer. Then add the barley. The barley will need about 30 minutes to simmer and cook.

Meanwhile, heat 1 tablespoon of butter in a skillet over medium heat. Add the mushrooms, season with salt and pepper, and let cook for 6-8 minutes, until browned. Then remove from the skillet and set aside.

Melt the remaining butter in the same skillet over medium heat. Add the onion, celery, and squash. Season with salt and pepper and sauté for 8 minutes, until soft.

Once the barley has cooked, add the mushrooms, onion, celery, squash, and chicken to the soup. Return to a simmer and let cook for 5 minutes. Then add the kale and let cook for another 2 minutes.

Want to save this recipe for Chicken Soup with Butternut Squash, Barley, and Kale for later? Here is an image for you to save on Pinterest: 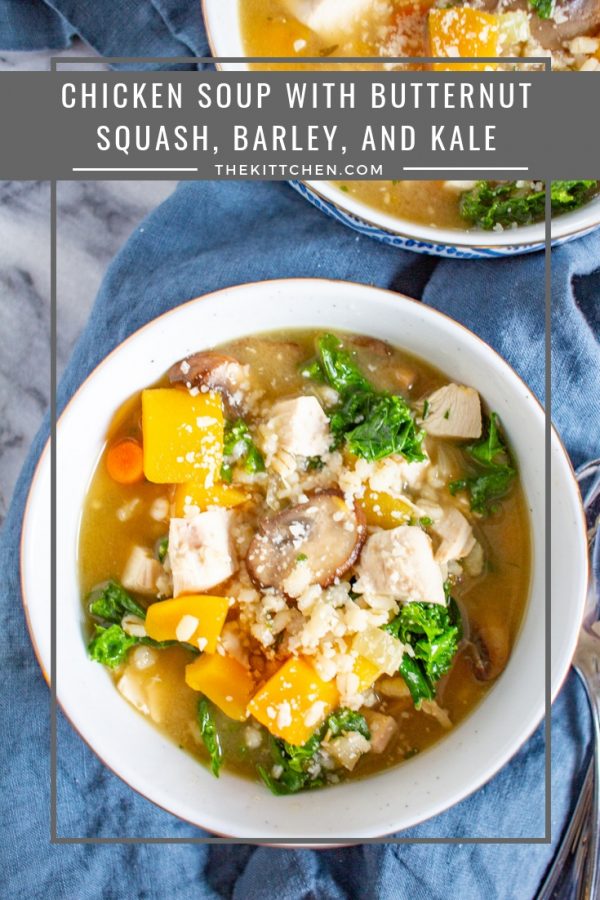 Ooooo the soupd made my mouth water, mucst be hungry!! I have chosen your post to be featured on Oh My Heartsie Girls Weekly Wednesday Party. It will also be featured on Pinterest and Instagram, you will be able to find it at either #omhgww or ohmyheartsiegirl Please stop by and share other posts so everyone can enjoy!! Wishing you a Happy Thanksgiving!

Looks delicious! Thanks for sharing at To Grandma's House We Go DIY, Crafts, Recipes and More Link Party! I pinned this! Hope to have you join us again next week.

I can imagine how delicious this soup is! Love the medley of butternut squash, barley and kale! I chose this to be featured this week in #OMHGWW

Thanks so much for featuring this recipe. I really appreciate it!

Helen at the Lazy Gastronome

Thanks for sharing at the What's for Dinner party! Have a great week and hope to see you at next week's party!

This looks and sounds so yummy! It's so chilly here in NC tonight I wish i had a bowl right now! Pinned! Thank you for sharing on Merry Monday! We hope you will join us again next week! Kim

It is frigid in Chicago too! Definitely soup weather. Thanks for pinning!!!