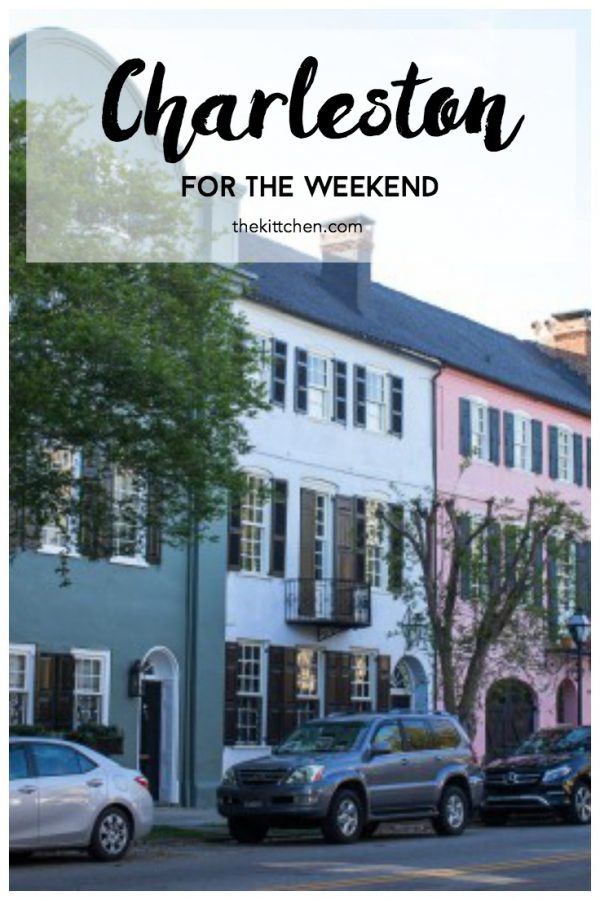 Charleston is one of America’s most beloved cities. It has history, beaches, charming architecture, and some of the best food in the country. I recently traveled to Charleston with my friends Jenny and Jordan to attend the Mediavine conference (they are my ad server). While most of the weekend was spent inside learning, we made the most of our spare time. Let me tell you about some of the delicious food we discovered. 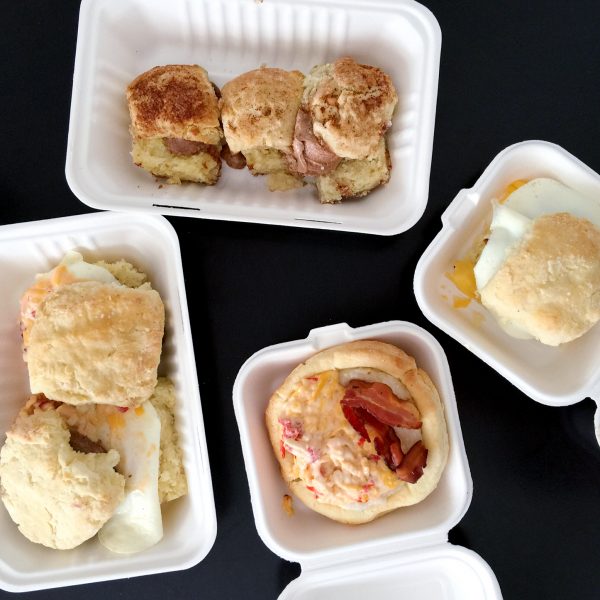 Conveniently, we were staying just a few blocks from Callie’s Hot Little Biscuit, and I went there everyday, ordering more and more food each time I returned. Callie’s was so memorable, that after trying it for the first time I dreamt about it that night. I have eaten a considerable amount of bacon in my life, and Callie’s has THE BEST BACON I HAVE EVER TASTED. I had thought that thick cut bacon was superior, but Callie’s bacon is really thin and extra crispy. 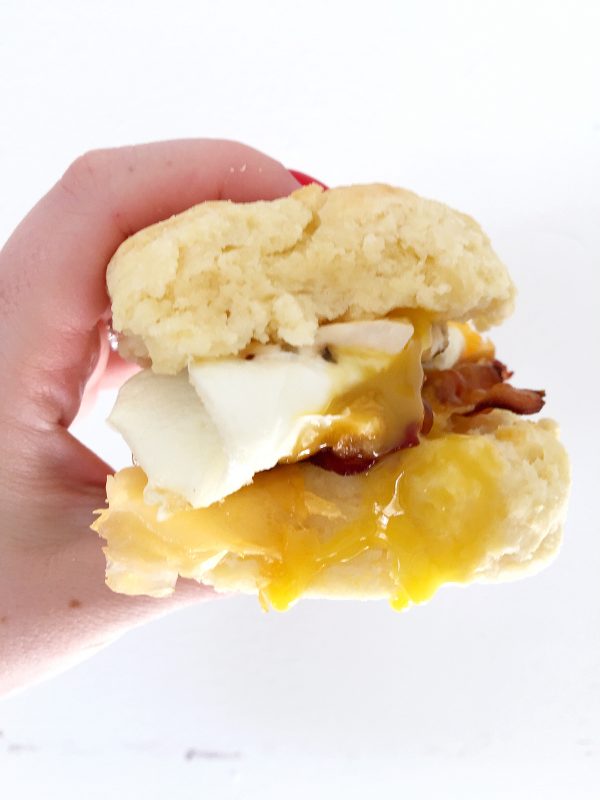 Callie’s serves freshly made sweet and savory biscuits. I loved the bacon, egg, and cheese biscuit sandwich. I recommend getting a runny fried egg instead of scrambled eggs. The runny yolk adds an extra element to the sandwich.

The most incredible thing on the menu at Callie’s is the grits that come served in a bowl made with biscuit dough. You can pick your topping for the grits and we found pimento cheese and bacon to be a winning combination. The mini cinnamon biscuits came with a generous dollop of whipped cinnamon butter and tasted like a cinnamon bun with a biscuit texture. I ate seven biscuits in three days, and I feel good about that life decision. It is probably a good thing that we don’t have Callie’s in Chicago. Heads up – Callie’s does have another location in Atlanta. 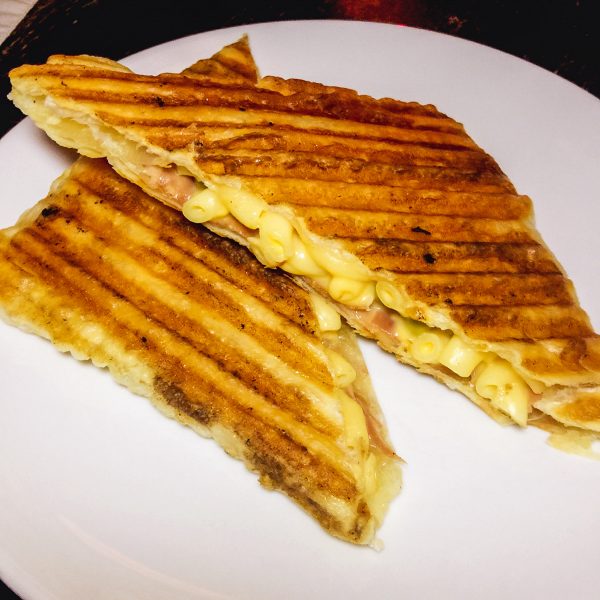 Another culinary innovation that we discovered was mac and cheese pop tarts. My friend John recommended The Belmont, a cocktail bar near where we were staying, and they make their own sweet and savory giant pop tarts. The Belmont was a great recommendation – the bars on Kings Street definitely cater to college kids and bachelorette parties, and we were feeling a little out of place. The Belmont is a more upscale than the other bars, and it isn’t filled with scantily clad twenty-somethings and drunk frat boys. The cocktail list was big and had a nice variety, and the mac and cheese pop tart lived up with our high expectations. In addition to the mac and cheese the pop tart was filled with peas and prosciutto. I should learn how to make this at home. (I know this photo isn’t great but I wanted to give you a visual). 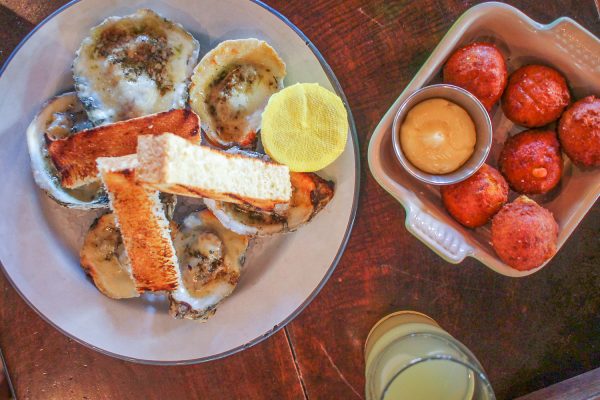 On my first day in Charleston I met John for lunch at Leon’s Fine Poultry and Oysters. It’s a casual restaurant serving up oysters and fried chicken a little further north on King Street, where it isn’t quite as busy. We started our meal with an order of char-grilled oysters with lemon and parmesan and some hushpuppies that came with the most incredible honey butter. 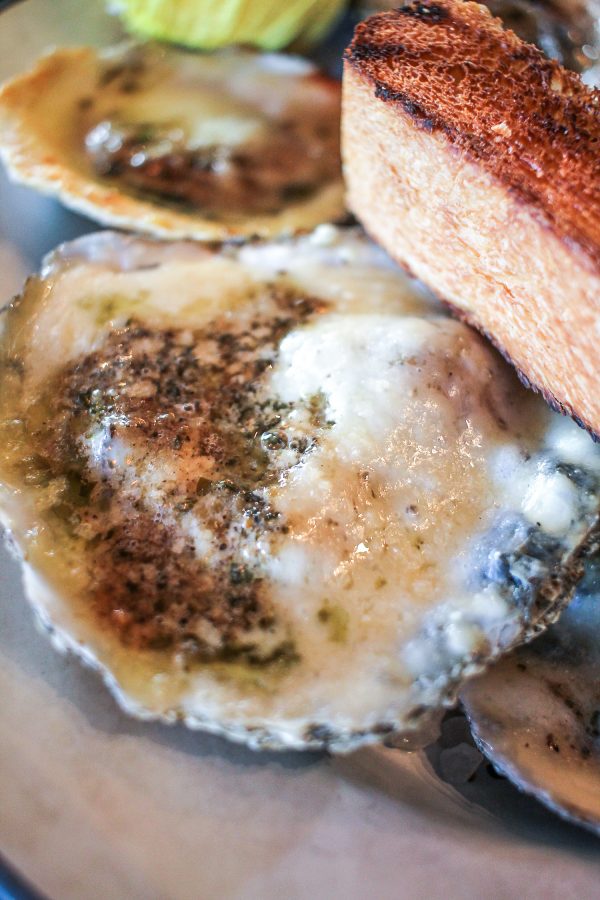 Oysters usually aren’t my favorite. I just can’t eat raw oysters – they are too briny for me and they remind me of times when I was swimming in the ocean and accidentally swallowed a gulp of seawater. I do eat oysters when they are cooked, and the char-grilled oysters at Leon’s were the best I have ever tasted. I loved them! 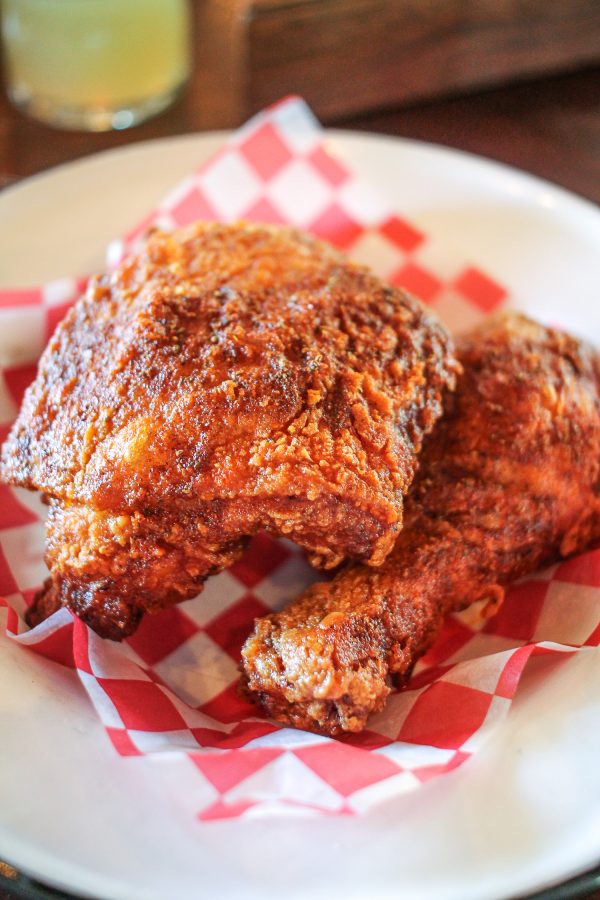 I rounded the meal out with some fried chicken. I had the dark meat chicken and the crust was extra crispy and had just enough heat to add some spicy without distracting from the flavor of the chicken. 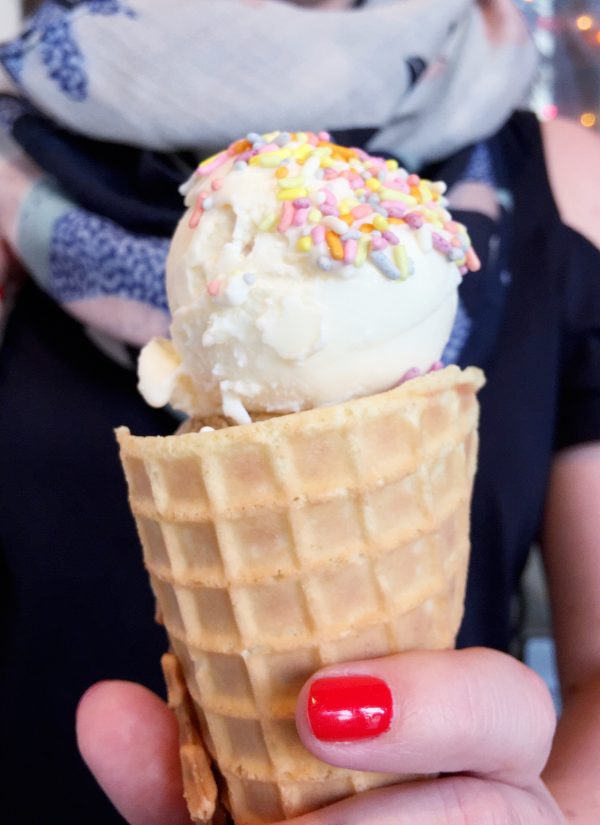 Once the conference ended, I couldn’t resist celebrating with a quick stop into Jeni’s Ice Cream on King Street. Then Jenny and I walked downtown to see the historic part of the city. 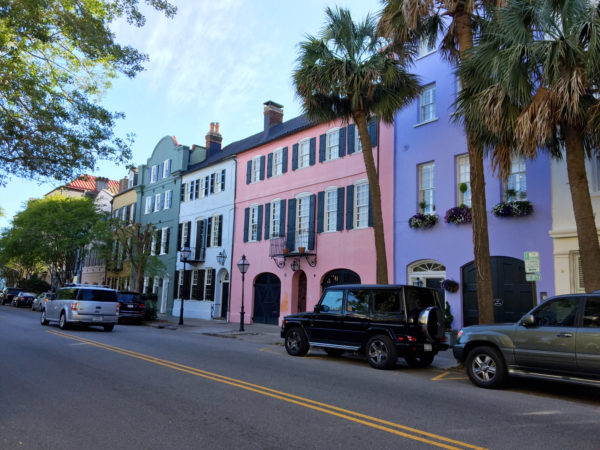 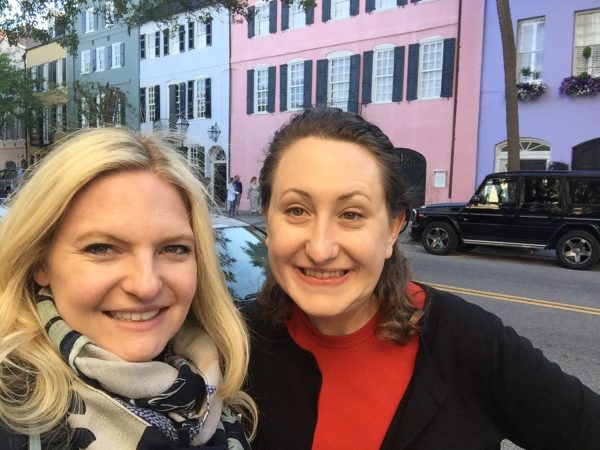 Jenny had never been to Charleston before, and I thought she should see Rainbow Row, a row of brightly colored historic homes right by the water. 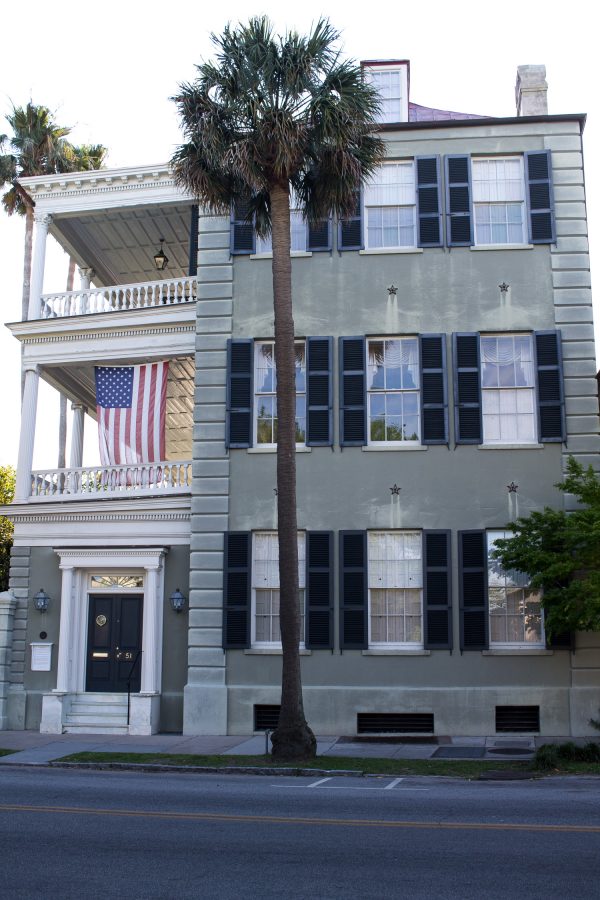 Charleston does have one downfall. It is expensive. I did some math and 6 days in Charleston costs just about the same amount as 6 days in Lisbon. The small city has become a major travel destination, and flights and hotels are expensive. Direct flights can be as expensive as international flights. Instead of paying more than $300 for a hotel, we decided to rent an AirBnB. I should warn you that we stayed too close to the College of Charleston and spent the weekend surrounded by frat parties. 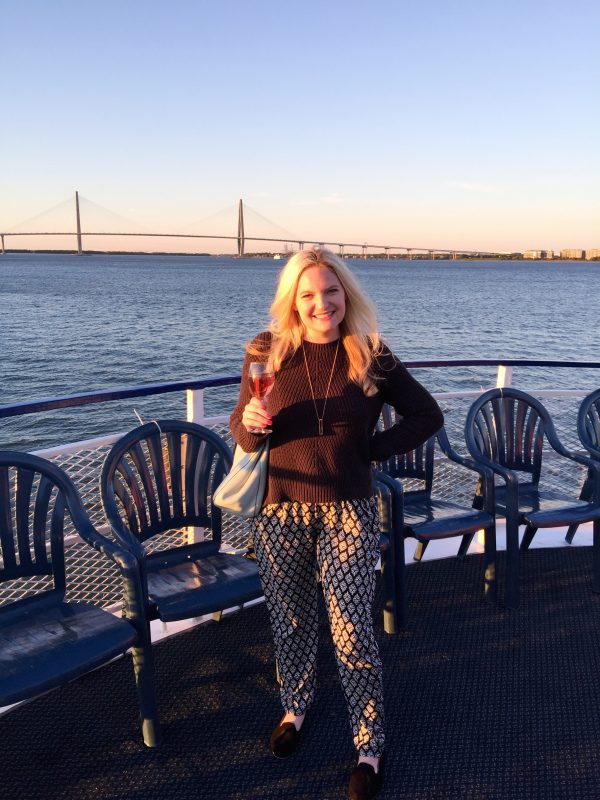 Want to read more about Charleston? You can read my previous posts here. Have you been to Charleston? Tell us your recommendations in the comments.

Eating seven biscuits in three days sounds like the best mini vacay ever! I would love to get to Charleston and now have even more reasons to do so. Yum!

It was the best mini vacay - now if I could get my skinny jeans to fit!

This kind of food just doesn't exist in Italy, and having read this and seen your photos I need it all now!!! Love the coloured houses too :)

But Italy has the BEST food :)

Omg I'm drooling right now! All of this food looks heavenly! I've been wanting to get down to Charleston for a while now, but I had no idea it was such a foodie destination! All of these places are on the list for sureeee

I hope you get to Charleston soon Lauren!

My goodness what a lot of indulgent, delicious food. A Mac and cheese pop tart?! Wowzers that sounds special! Callie's sounds like a winner too. I've been hearing a lot about Charleston recently so not totally surprised it's being popular (and expensive). Thanks for linking #citytripping

I need to recreate that pop tart ASAP!