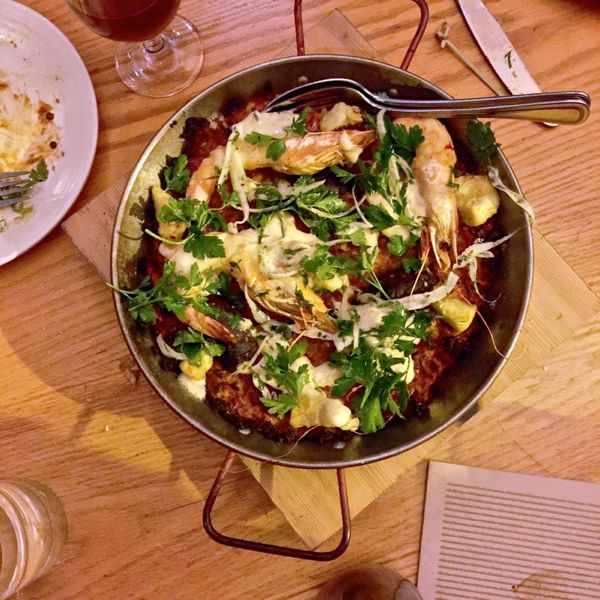 Avec is a West Loop eatery with communal tables, a casual atmosphere, and serious food. We recently joined some friends for a meal at Avec, and half the group was excited to have some of their favorite items from the restaurant’s menu, while the other half was experiencing the restaurant for the first time.

I wasn’t intending the blog about this meal – I was relaxing with friends, but this meal was so good, I need to share the experience with you. I took photos with ninja like speed using an iPhone, since I don’t like to go into “blogger mode” when I am dining with a group. Even though I am a food blogger, I don’t want to seem obnoxious by making people wait to eat so I can snap lots of photos. These photos might not be my best work (and the lighting was super funky) but I think you get the idea. 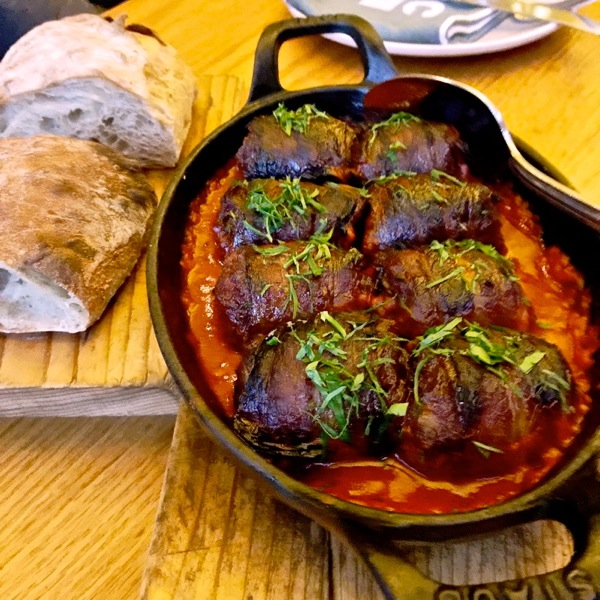 My friend Laura and I ordered for the table, an easy task since at Avec you simply cannot go wrong because the food is just that good. Everything on the menu is meant to be shared, and since the menu is small and there were seven of us, we go to try a good portion of the menu. While Laura and I were assigned the task of ordering, the others glanced and at the menu and made a point to tell us that they wanted to try the Chorizo-Stuffed Medjool Dates. We let everyone know that we would be receiving two orders. This is one of Avec’s most popular dishes. I know this only because it is the first thing anyone talks about when you mention Avec. The small plate appetizer consists of a large dates, filled with spicy chorizo, wrapped with bacon, and served with a tomato sauce. The chorizo has just the right amount of spice to boost the flavor without being overwhelming. 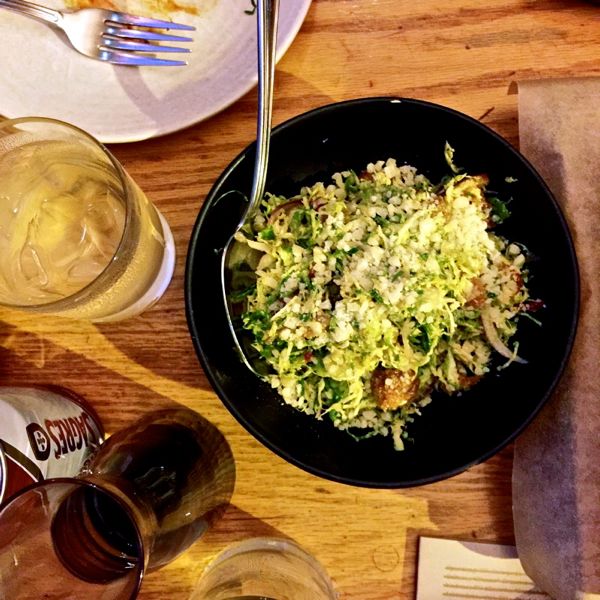 Next we had the Brussels Sprout Panzanella Salad with pickled radishes, chiles, and cheese. At first the men were a little apprehensive of the shaved brussels sprout salad since they had never had raw shaved sprouts before, but I saw them going back for seconds. I loved the combination of the crunchy bread and the finely shaved sprouts.

The focaccia with taleggio, ricotta, truffle oil, and herbs looked more like a pizza. Unfortunately we gobbled this up before I could take a photo, but thin focaccia was layered with herbs and ricotta, and topped with taleggio and cooked until the top was golden brown. The crispness of the browned taleggio the focaccia contrasted nicely with the soft ricotta in the center.

Avec’s menu is separated into smaller plates and larger plates. We ordered two of some of the smaller plates so that it would be enough for our larger group. The large plates were big enough that a single portion was shareable.

I loved the Pork Shoulder with lentils, brussels sprouts, and apples. The meat was juicy and tender and I loved the apples even if it was a less Spring-y menu item. 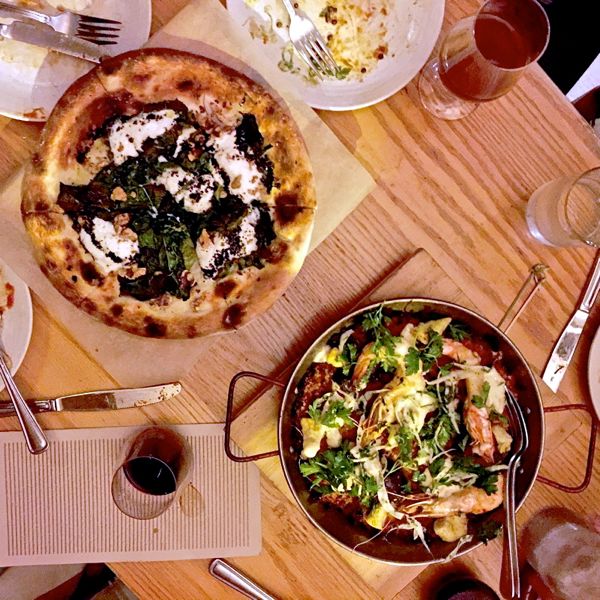 The Shrimp Paella was huge – more than enough for our table to share. The rice was full of flavor and had a generous amount of cheese. It was topped with large whole shrimp and wood fired. The crunchy bits of rice on the sides of the pan were especially delicious. The paella changes seasonally, and I believe that the shrimp paella is the spring/summer offering.

The Burrata Pizza with Kale (pictured above with the Paella) had a nice doughiness. The crust was chewy on the edges and thin in the middle. I am not a big fan of kale, but it worked well with the burrata on this pizza. 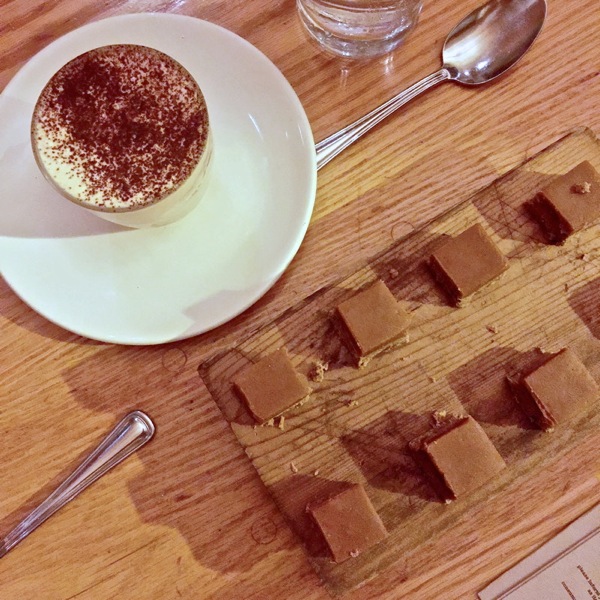 Since Avec has communal seating, there was a couple we didn’t know at the other end of the table, and when they ordered the Housemade Nutterbutters memories of their deliciousness came rushing back to me. I love nutterbutters, and Avec’s gourmet recreation of the classic cookie is not to be missed. We had two orders of the nutterbutters brought to the table, and everyone devoured the dessert with a crispy crunchy cookie like bottom and a fudgey peanut butter top. 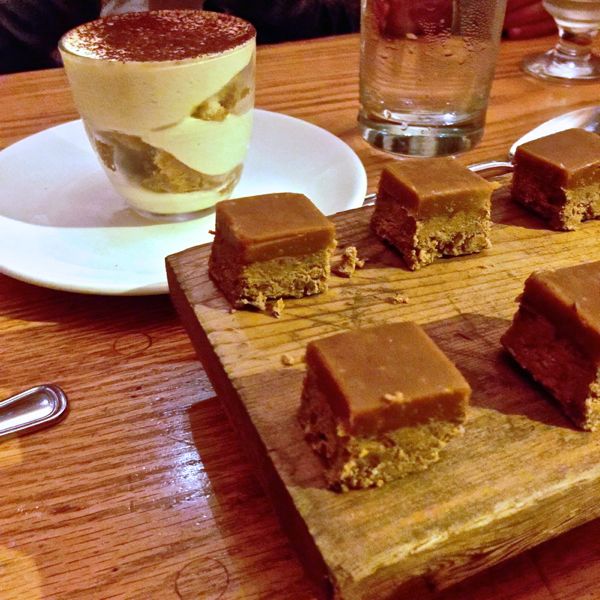 We also tried the tiramisu which was light and creamy. The lady fingers were soaked in sambuca and layered with espresso and whipped mascarpone.

Dining at Avec is one of the best deals in Chicago. The food is top notch, but the prices are certainly more affordable than other restaurants. The bill came to $42 a person, including 1-2 drinks per person.

Avec can be found at 615 West Randolph Street, in Chicago’s West Loop neighborhood.